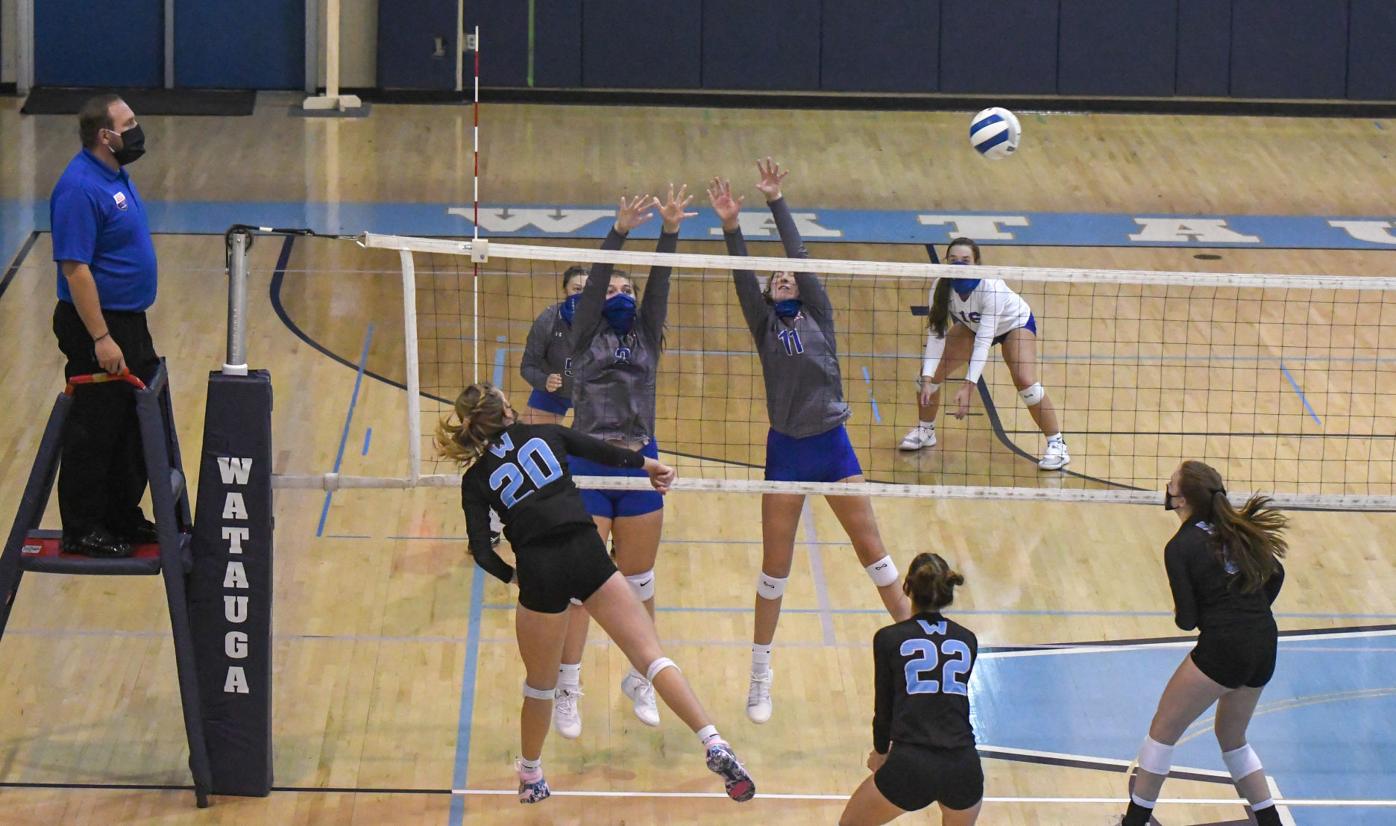 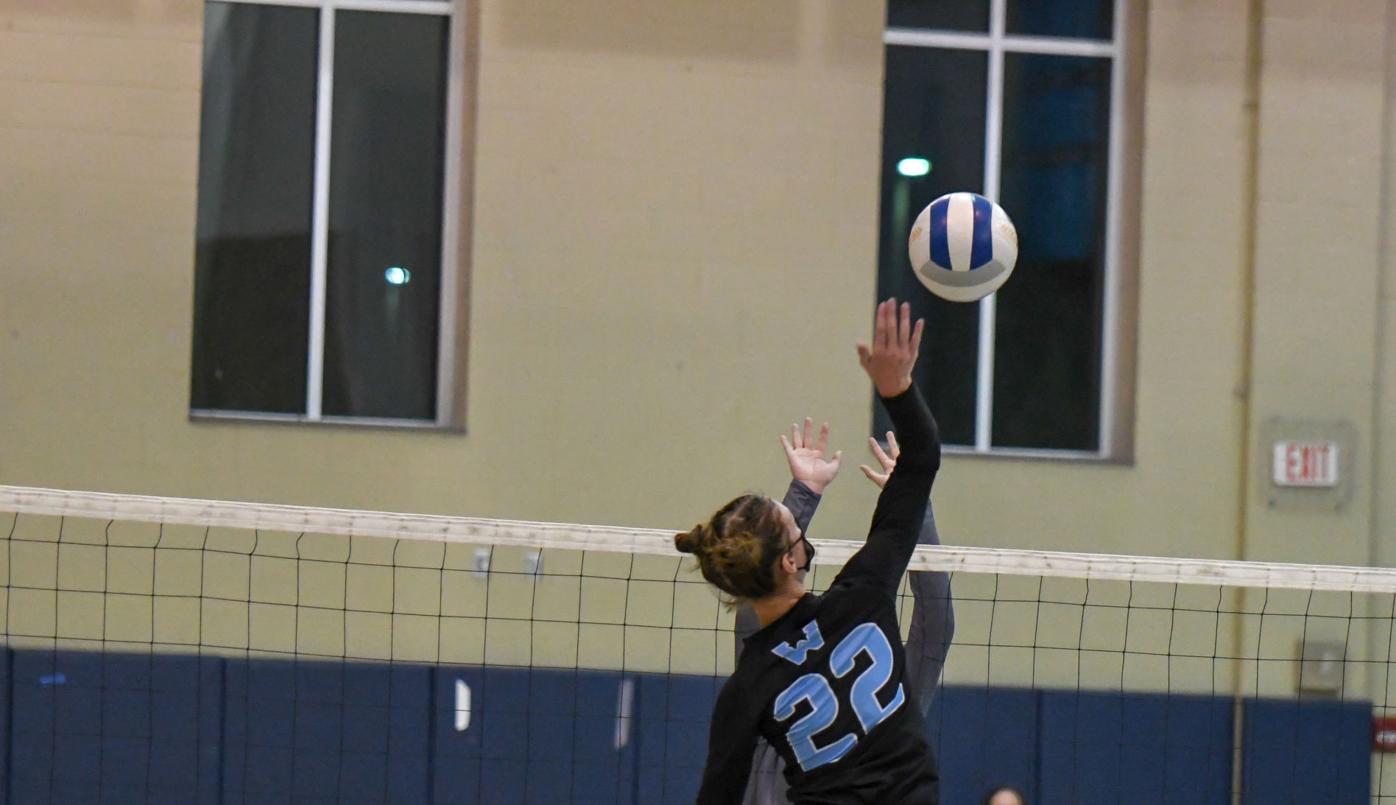 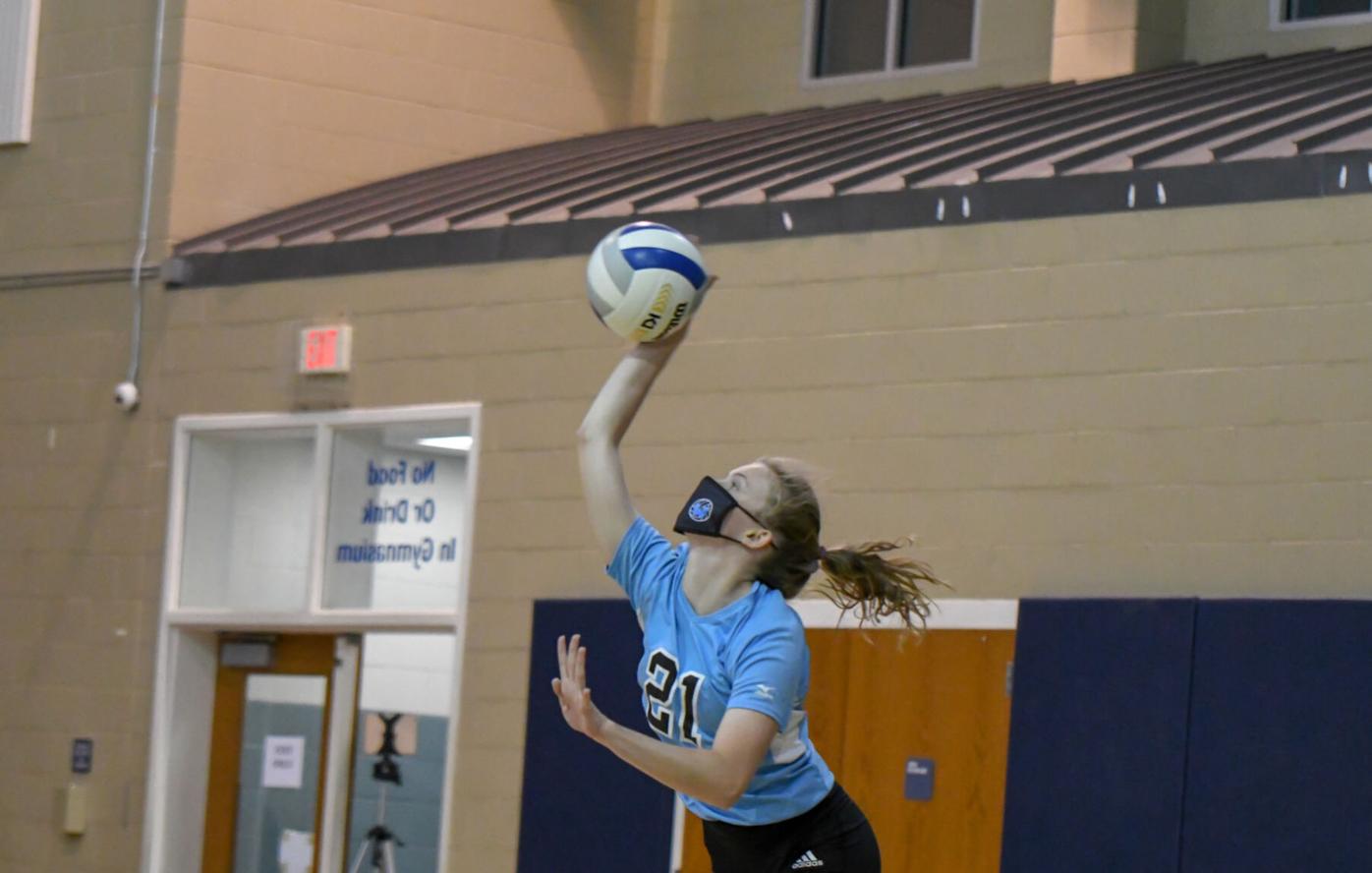 Sadie Sharpe (21) of Watauga serves against McDowell in the Pioneers’ 3-set sweep. 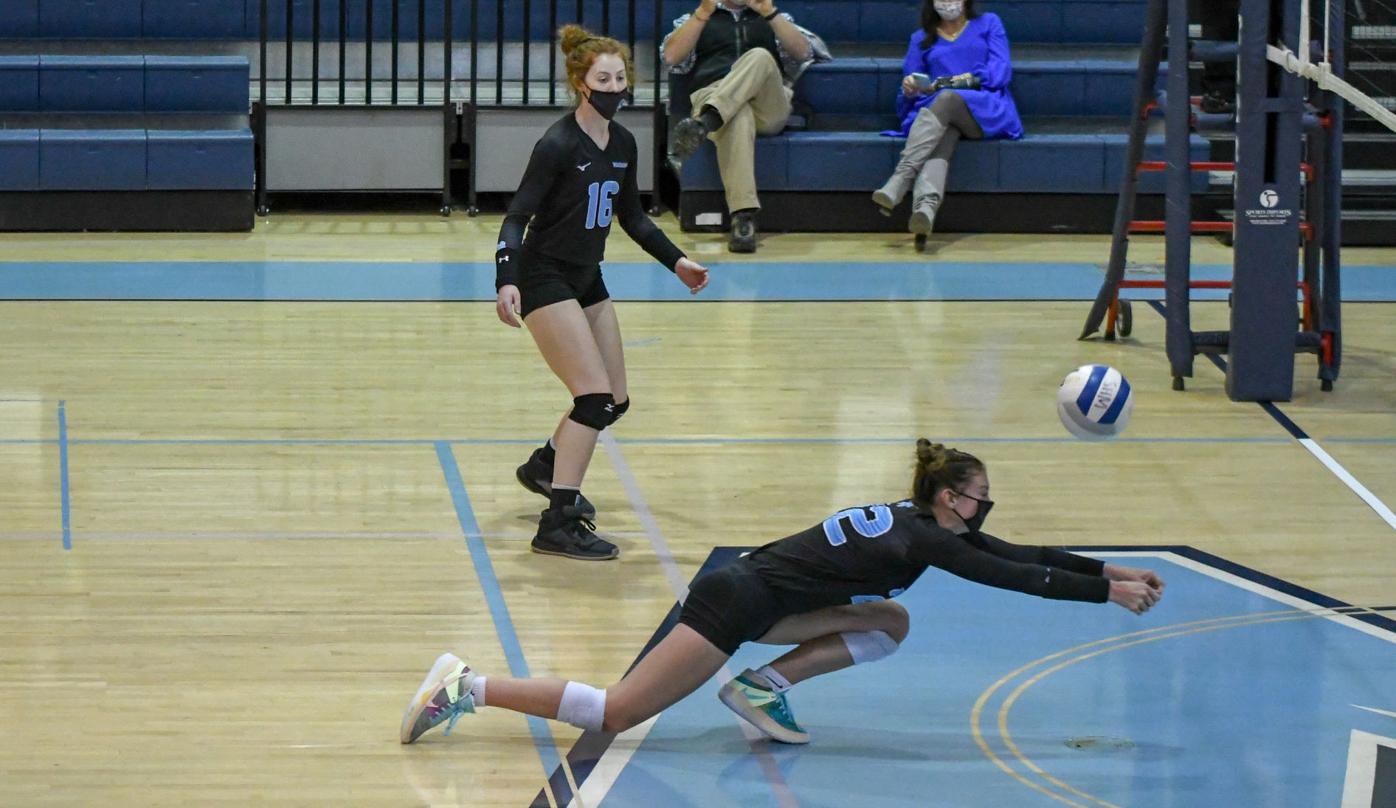 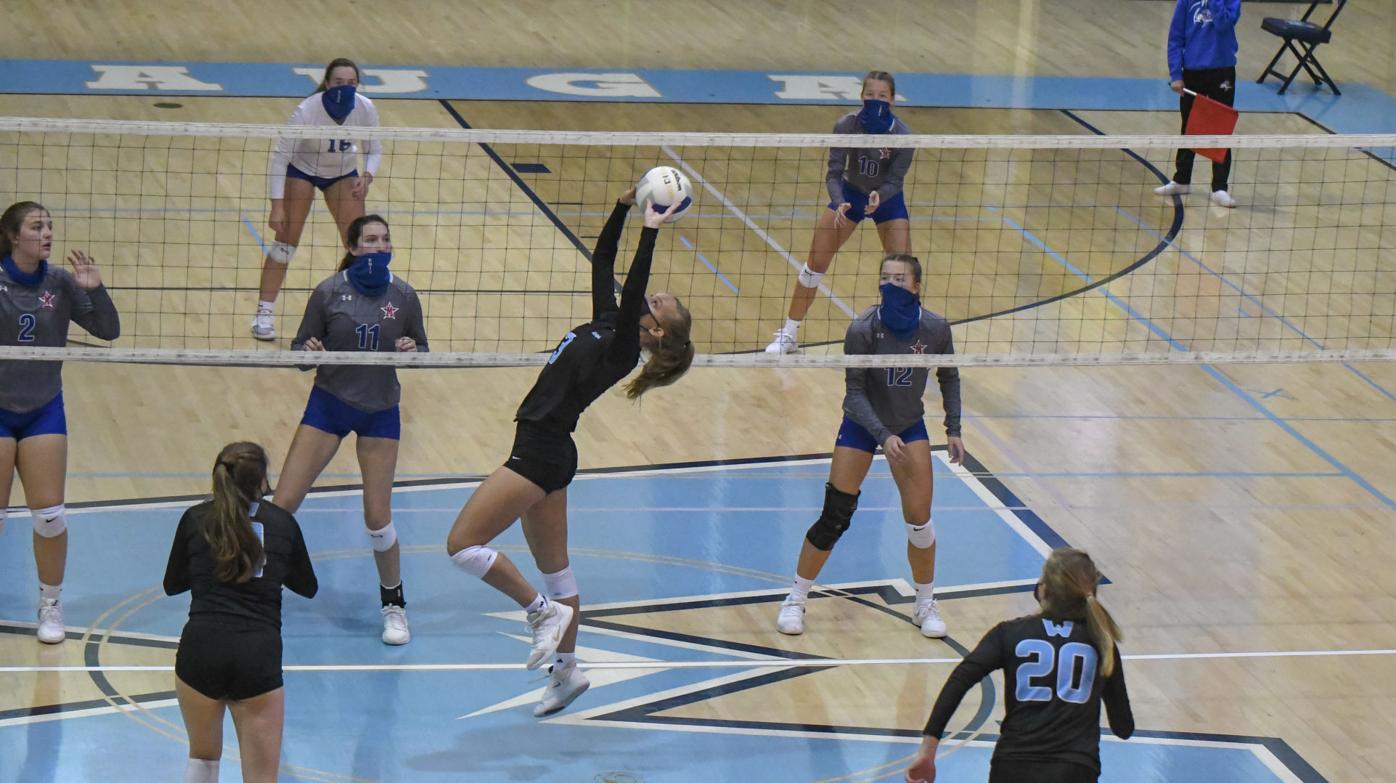 Designated setter Brelyn Sturgill (3) sets the ball at the net for middle hitter Brooke Scheffler (20) in the third set of Watauga’s 3-0 victory over McDowell. 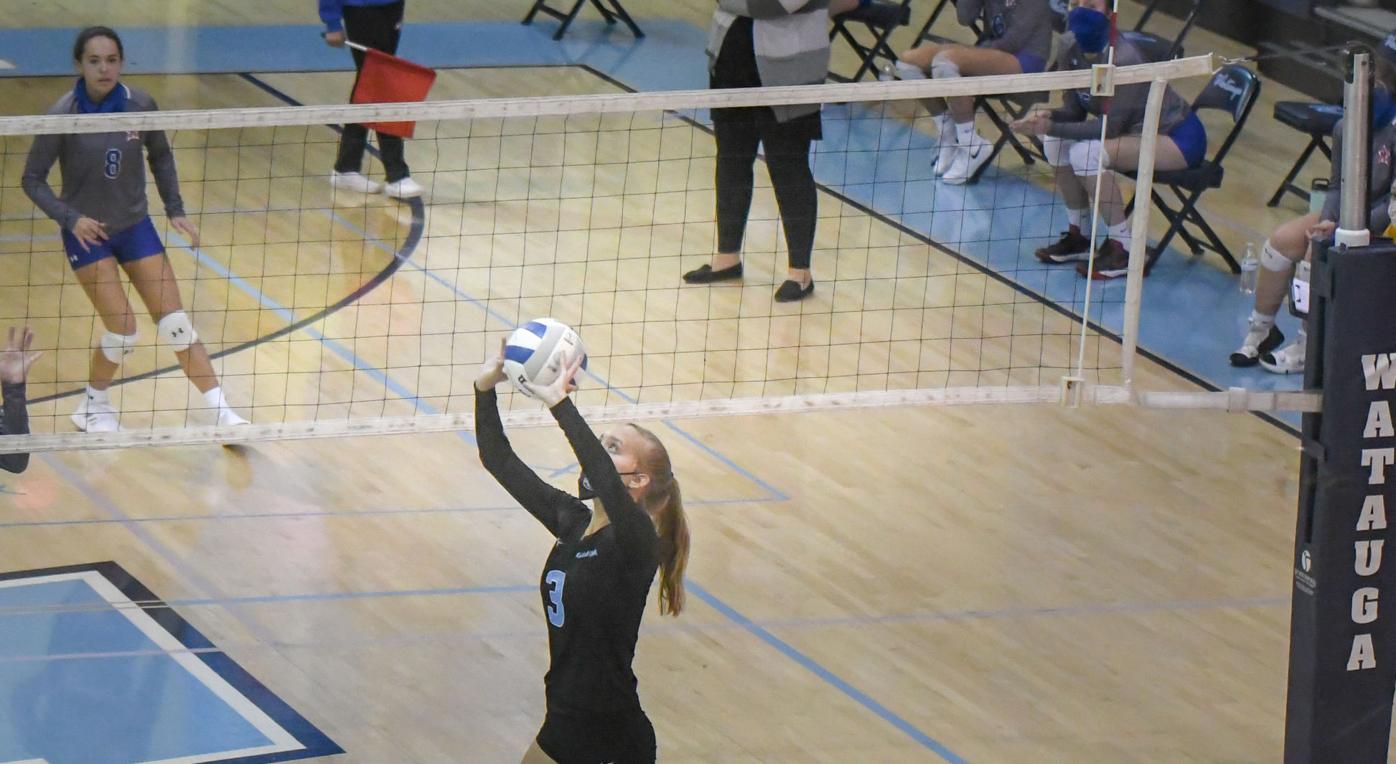 Watauga junior setter Brelyn Sturgill (3) has a clear view for this set across the front line to Farthing against McDowell in Wednesday night’s third set.

Sadie Sharpe (21) of Watauga serves against McDowell in the Pioneers’ 3-set sweep.

Designated setter Brelyn Sturgill (3) sets the ball at the net for middle hitter Brooke Scheffler (20) in the third set of Watauga’s 3-0 victory over McDowell.

Watauga junior setter Brelyn Sturgill (3) has a clear view for this set across the front line to Farthing against McDowell in Wednesday night’s third set.

It was a clean sweep for the Watauga High School volleyball teams Nov. 18, but it was not without a few anxious moments. The Pioneers varsity and junior varsity squads won, respectively, 3-0 and 2-0 over visiting McDowell.

The COVID-19 restrictions on high school athletics in North Carolina have kept both the Pioneers and the Titans sidelined until only recently and, as WHS sophomore middle hitter Brooke Scheffler said afterward, “The rust showed in those first two sets, but we got into a little more into a rhythm in the third set and played more of our brand of volleyball.”

In the first two sets, McDowell’s athletes certainly demonstrated that they would not be a “gimme” victory for the Pioneers. Big serves and fierce rallies punctuated the team’s performance, countering the Pioneers’ big hitters in Scheffler and sophomore outside hitter Caroline Farthing with sparkling digs to keep the ball in play. All too often, though, the powerful spike attempts by the Pioneer duo got the Titans off balance in returning the ball.

On the night, Scheffler and Farthing split the attack workload fairly evenly with 14 and 13 kills, respectively. The Pioneers’ designated setter, junior Brelyn Sturgill, did yeoman’s work at the front in registering 28 assists. Senior setter Ava Williamson and Sturgill were the statistical leaders from the serving line, with three and two aces, respectively.

“I am really proud of these girls and of the way they performed tonight,” said the Pioneers’ first-year head coach Kim Pryor. “Because of the COVID-related restrictions, we haven’t really had much in the way of practice. It’s hard to practice going up together to block shots when you also have to be conscious of social distancing in practice.”

Farthing agreed that the first two sets were not as crisp as they normally play and certainly not in midseason form, “But we got it going in the third.”

With seven juniors, four seniors and five sophomores making up the varsity roster, Pryor admitted that her charges are young, but also experienced.

“We have had a couple of sophomores in Scheffler and Farthing step up to fill some big shoes after a couple of last year’s big hitters graduated,” said Pryor, referring to all-Northwestern Conference performers Brooke Byrd and Rebekah Farthing. Byrd has retired from competitive volleyball to attend Appalachian State and focus on a healthcare career. Farthing, as a freshman, is the starting libero at Georgia Southern University.

Both Scheffler and Caroline Farthing have gained a lot of confidence in play vs. their freshman seasons and the extra year of maturity showed against the Titans.

“I think a lot of my confidence this year comes from knowing that I have a bigger role on the team and I am expected to step into that role,” Scheffler said.

Next up for the Pioneers are a pair of “freedom” matches on Monday, November 24. At 6 p.m., Watauga takes on Freedom High School (the Patriots) of Morganton, then at 11:00 pm the Pioneers face the Freedom Irish of Freedom, Wisc., in a non-conference match-up.

Both matches will be hosted at Freedom High School in Morganton.