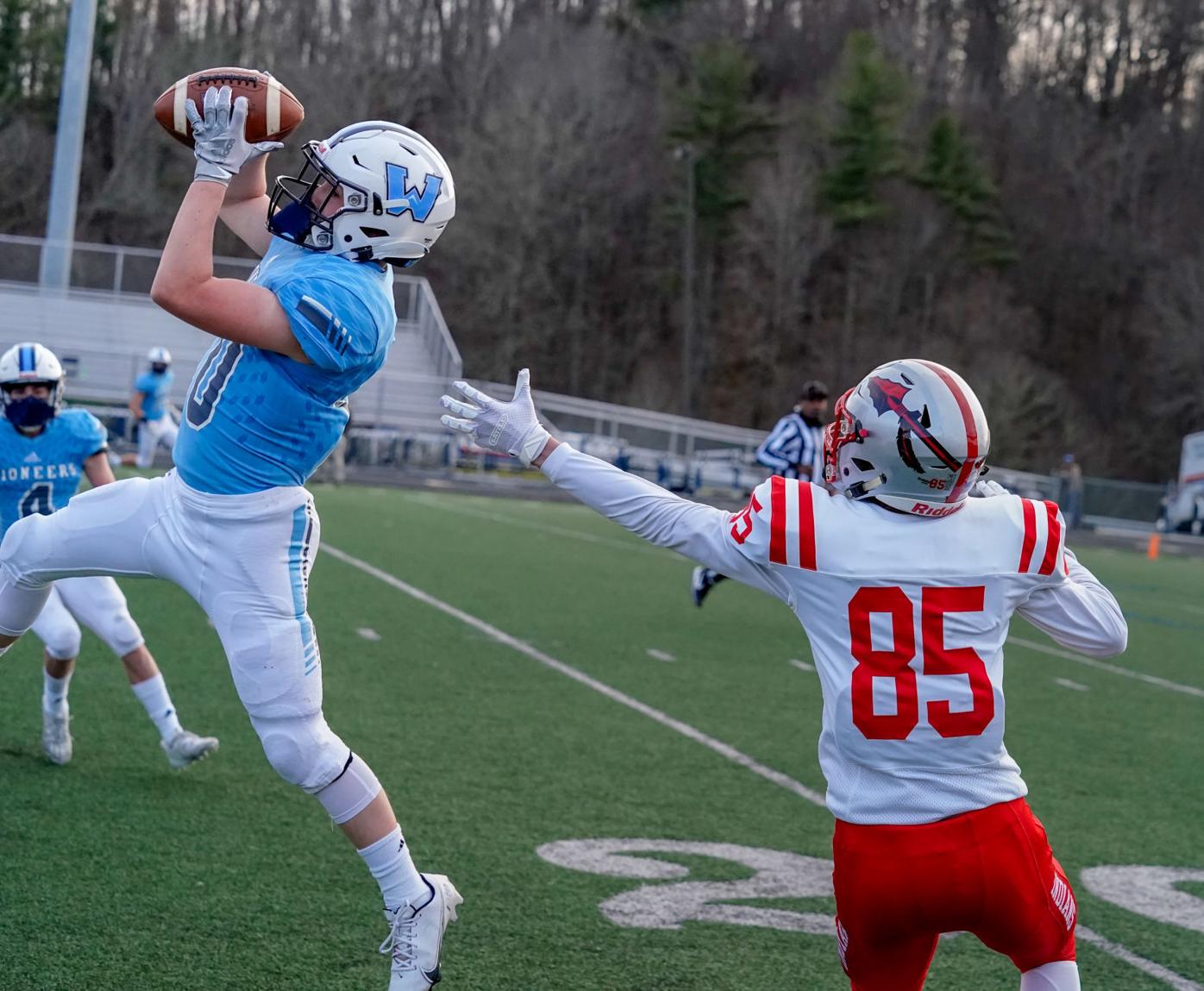 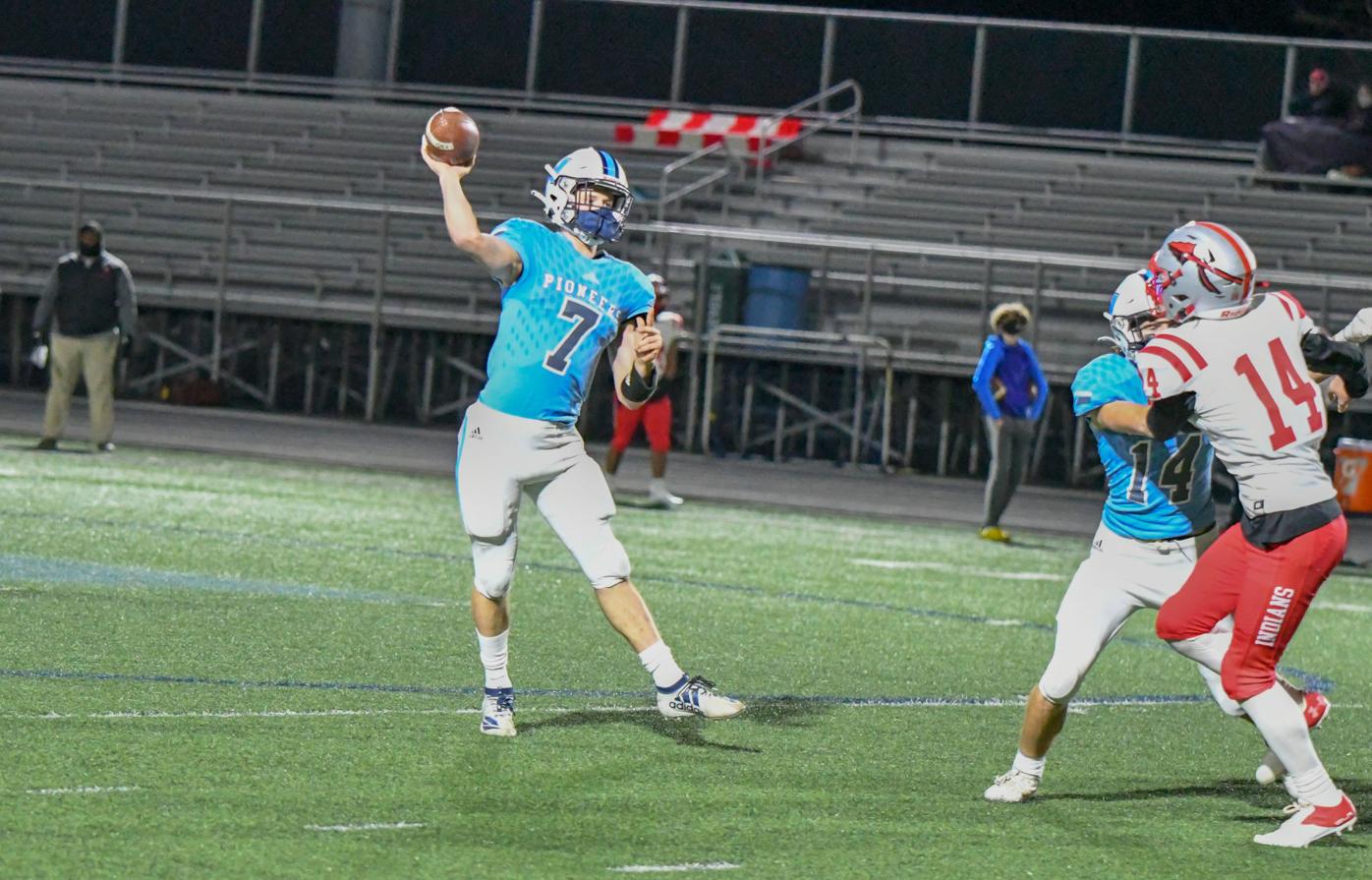 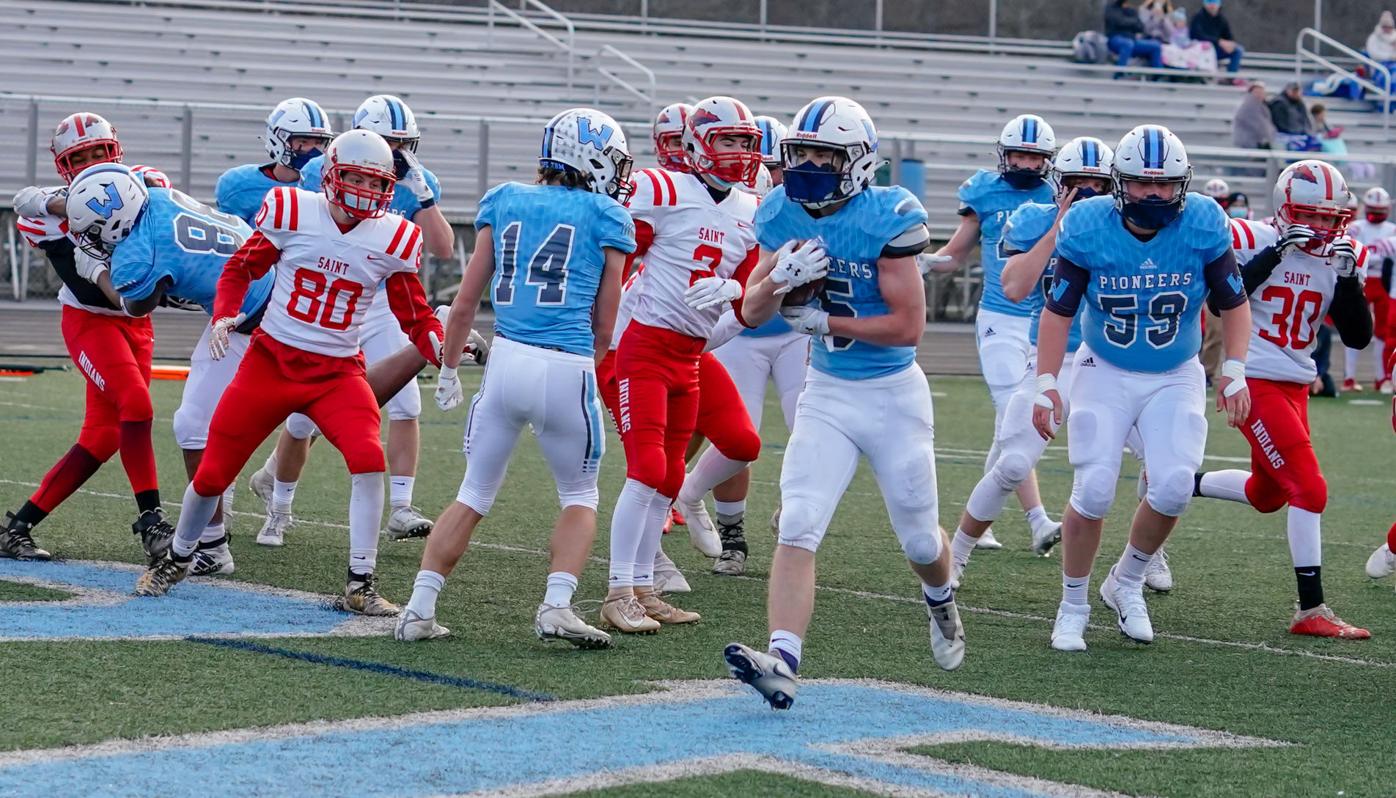 Running back Carter Everett (5) romps through a big hole on the left side for an early TD against St. Stephens on March 19 at Jack Groce Stadium. Watauga won, 49-13. 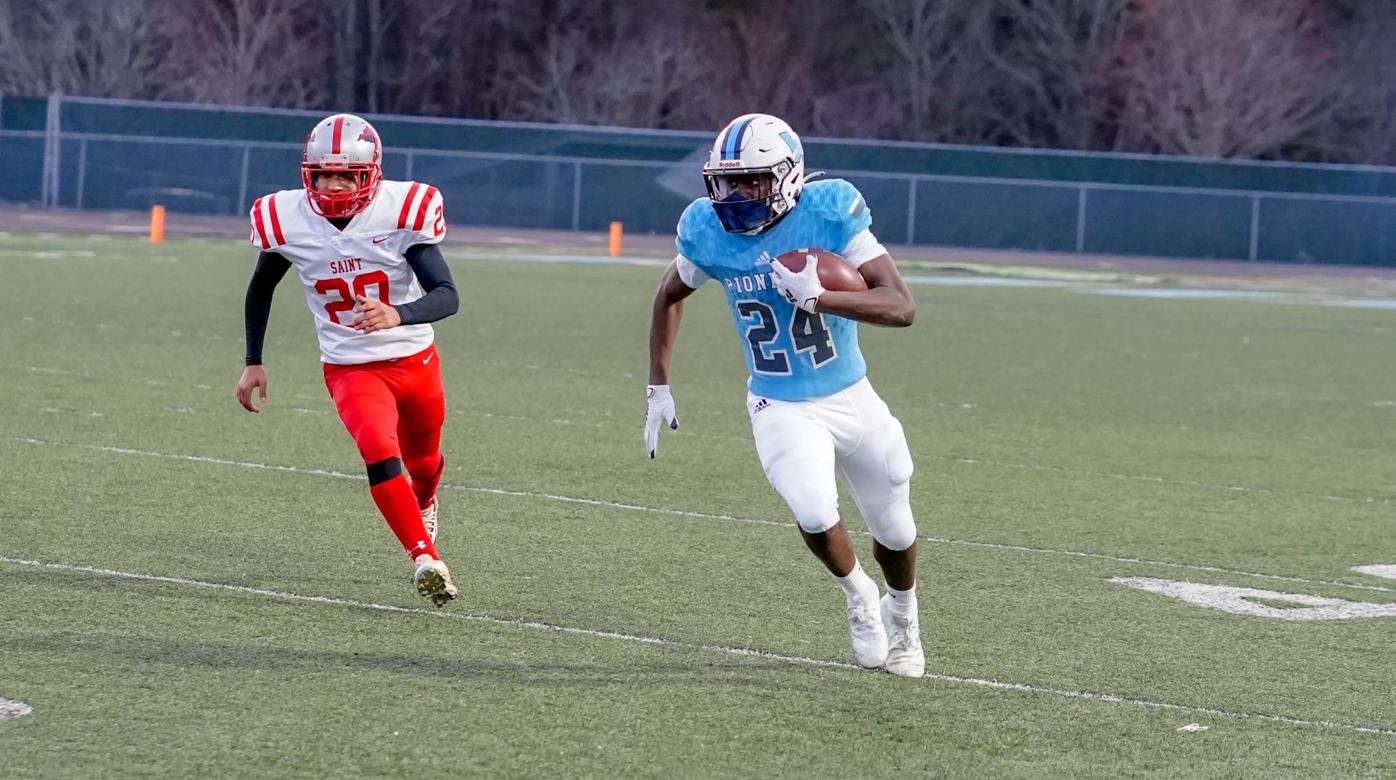 Watauga sophomore speedster Trey Thompson (24) beats it around the left side in the Pioneers 49-13 win over St. Stephens, March 19, at Jack Groce Stadium. 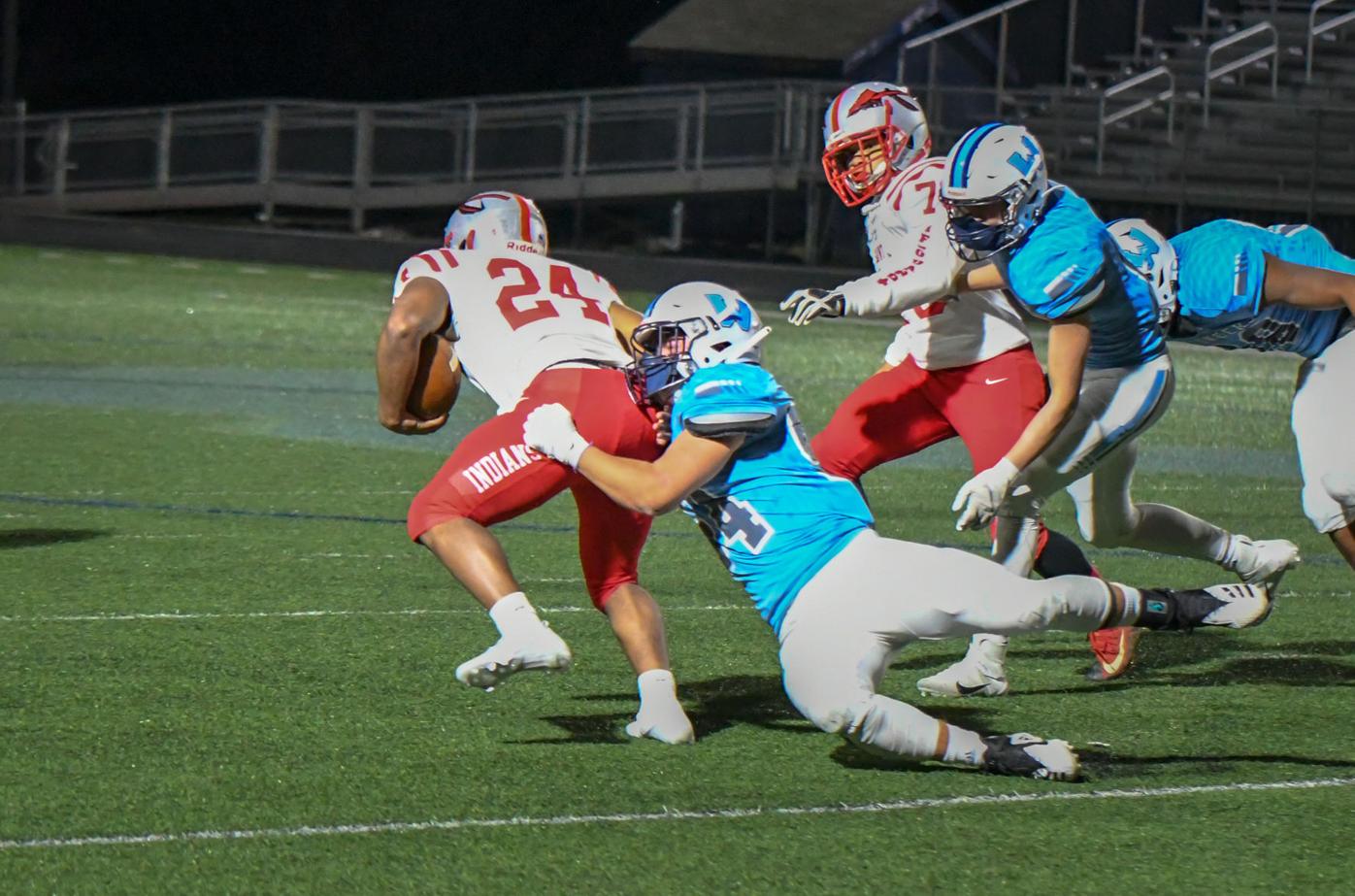 Watauga’s Sebastian Best (14) stops the St. Stephens running back near the line of scrimmage for only a small gain in the Pioneers’ 49-13 win over the Indians at Jack Groce Stadium, March 19.

BOONE – Rolling up 481 yards of total offense — and holding an opponent to just 164 yards — is a good recipe for winning football games. Watauga High School did just that Friday, March 19, at Jack Groce Stadium while dominating Hickory-St. Stephens, 49-13.

Except for a couple of missed assignments on passing plays and a breakdown on special teams — that resulted in a second quarter, 86-yard kickoff return for a touchdown by the Indians’ senior running back Zak Mclauchlin — the Pioneers played even better than in their first two outings, albeit Alexander Central and Hickory are arguably stronger opponents.

Senior wingback Sebastian Best ran for 168 yards and two touchdowns, the scores coming on exhilarating runs of 78 and 40 yards. Best’s sprints down the right sideline helped Watauga to a 21-0 lead by the end of the first quarter.

Watauga’s Orlando Leon produced a 43-yard touchdown run over the left side in the third quarter and sophomore wingback Trey Thompson punched in another from four yards out in the fourth quarter. With 34 seconds remaining in the game and Habich giving several reserves valuable game experience, St. Stephens’ Mclauchlin led a late offensive series and finally ran it in from one yard out to account for the last of the evening’s scoring.

Considering that Watauga’s center, Logan Johnson, was injured early last week and unavailable for the game against St. Stephens, the offensive unit’s performance was impressive. Senior linebacker Jack Kohout, who had never played the center position before, stepped up into that critical role in Habich’s multi-formation offense.

“Kohout did a great job tonight,” Habich said after the game. “St. Stephens’ nose tackle is pretty darn good and Jack held his own.”

Next game for Watauga is a visit to McDowell on Friday, March 26. The Titans lost to Alexander Central, 39-7 while the Pioneers were beating the Indians, Friday night.

In other area action, the game between South Caldwell and Freedom was postponed because of COVID-19. West Caldwell surprised Foard, 13-0. West Wilkes got by Starmount, 10-7. Ashe County defeated Wilkes Central, 42-6.