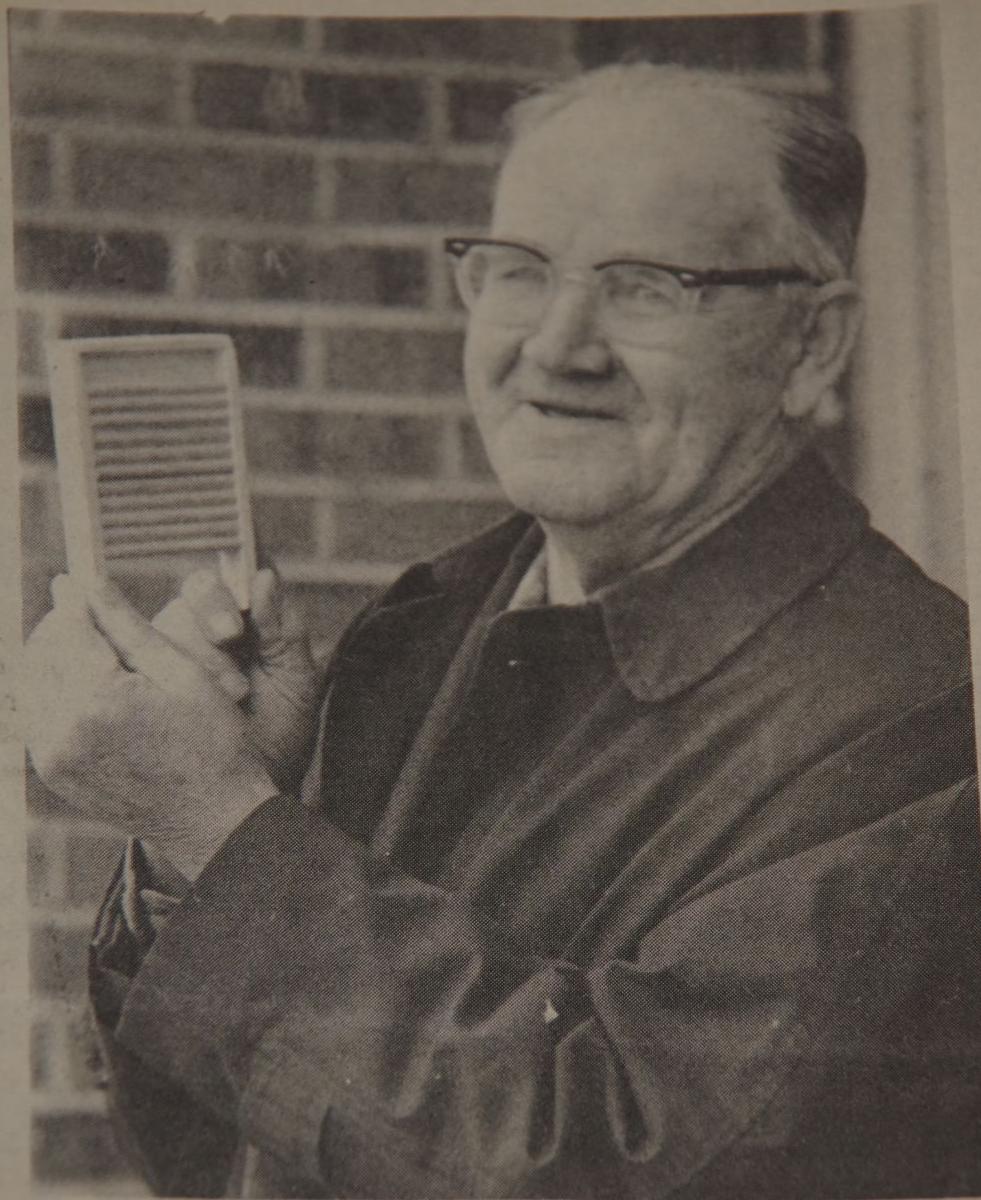 Dave Hodges holds up a mini washboard in a Jan 29, 1970, article in the Watauga Democrat. 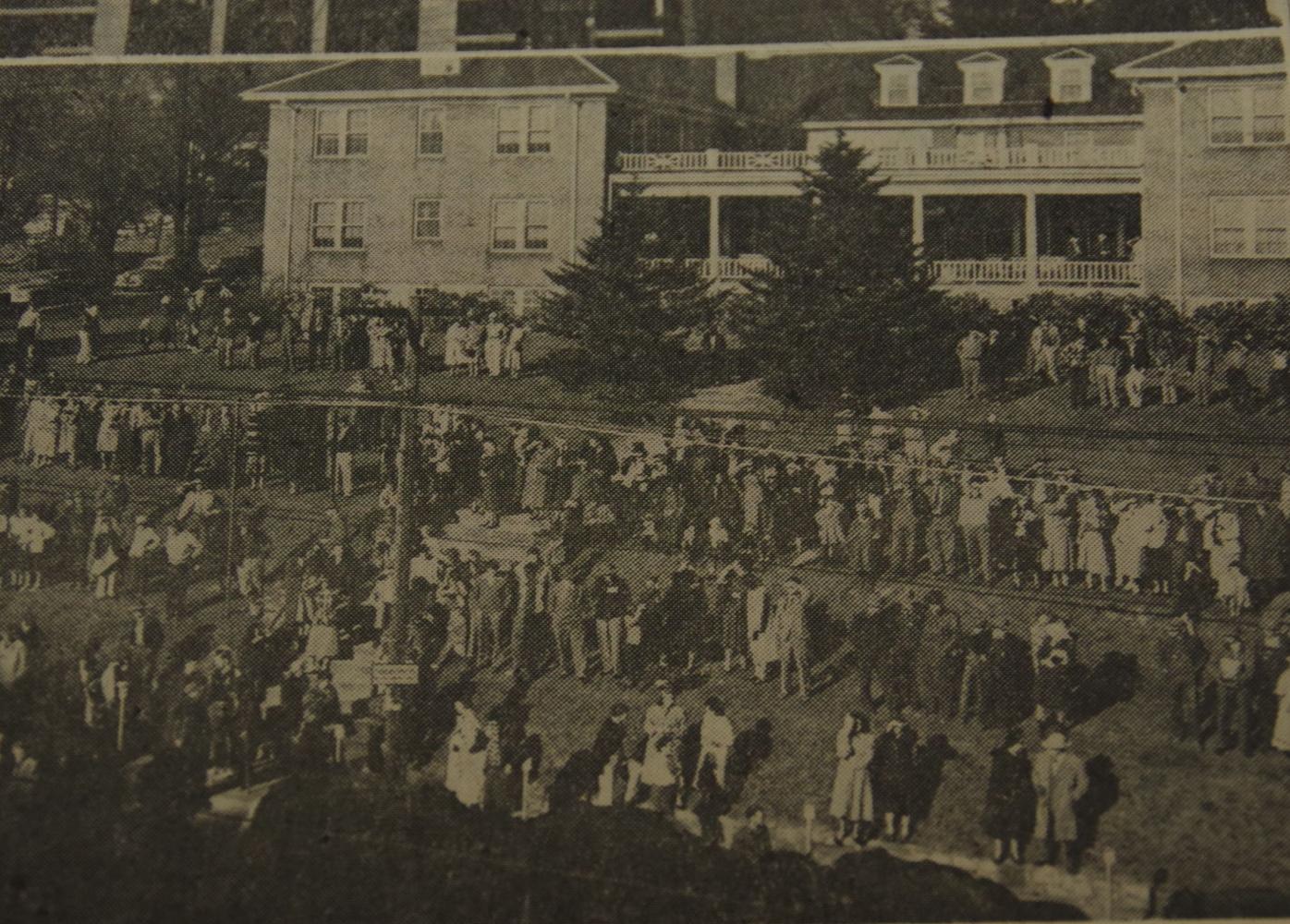 People stand in watch as firefighters put out a fire at the Appalachian Theatre in 1950. 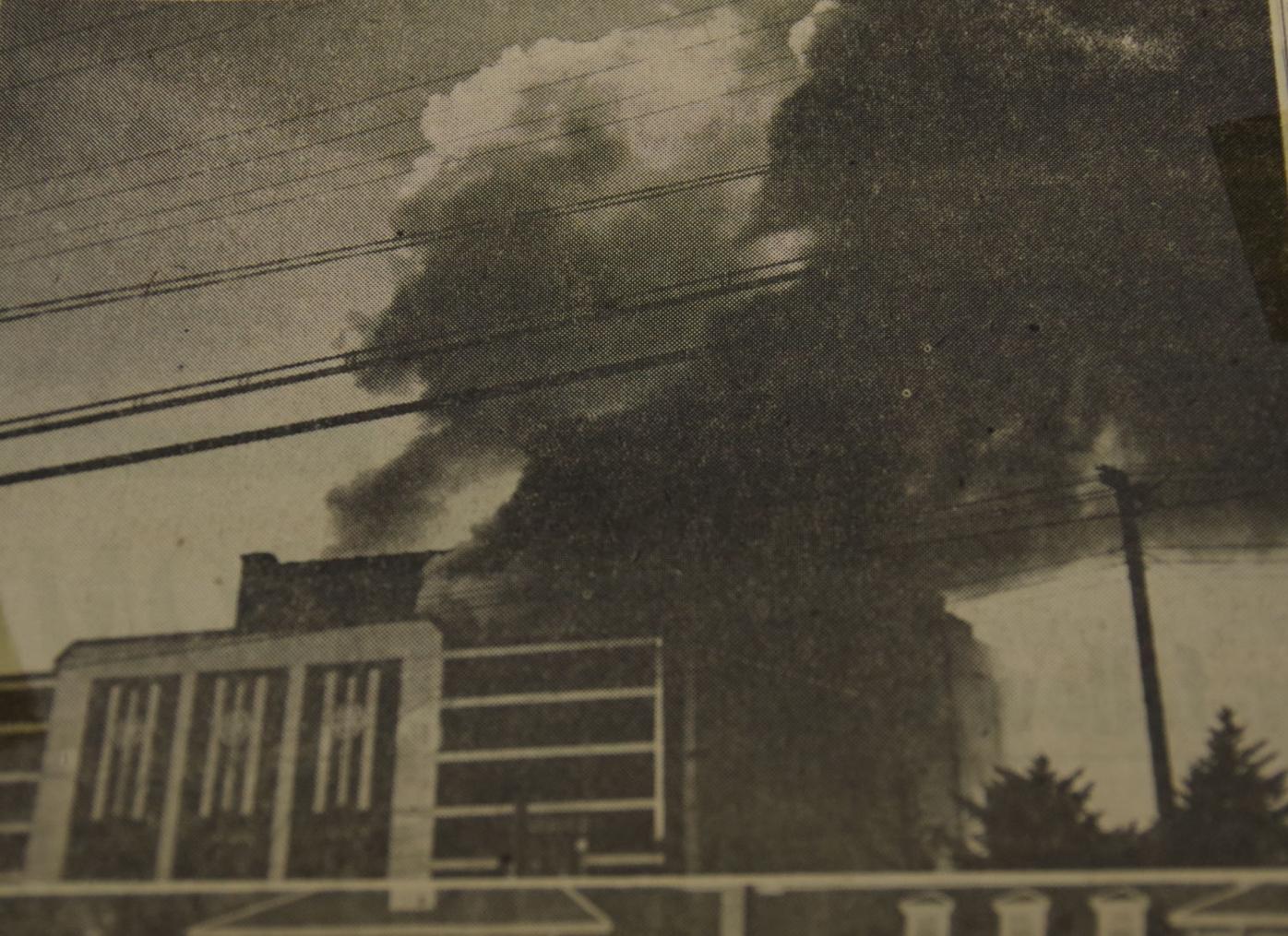 Part of the Appalachian Theatre burns as shown in a Jan. 26, 1950 article in the Watauga Democrat. 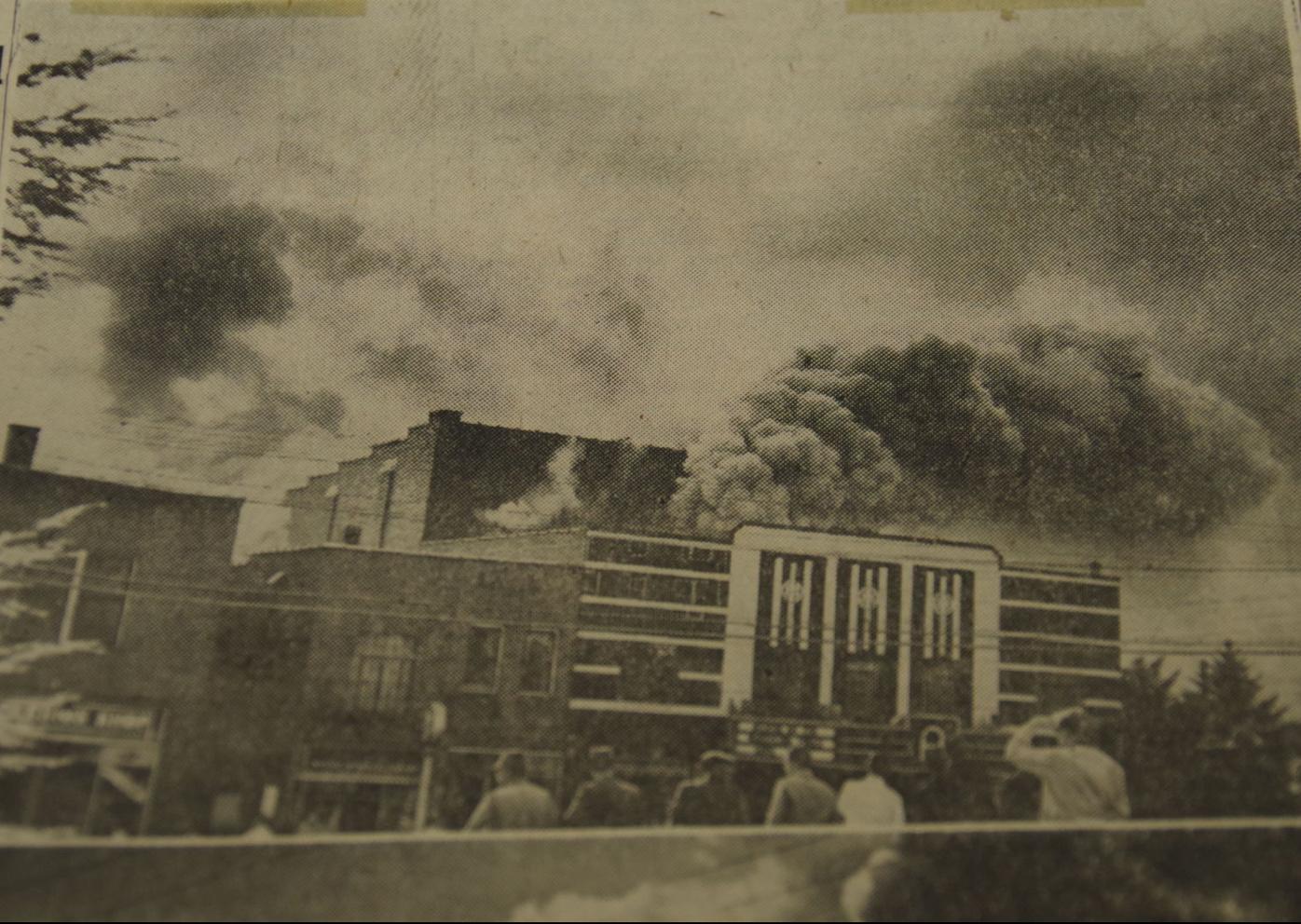 Part of the Appalachian Theatre burns as shown in a Jan. 26, 1950, article in the Watauga Democrat. 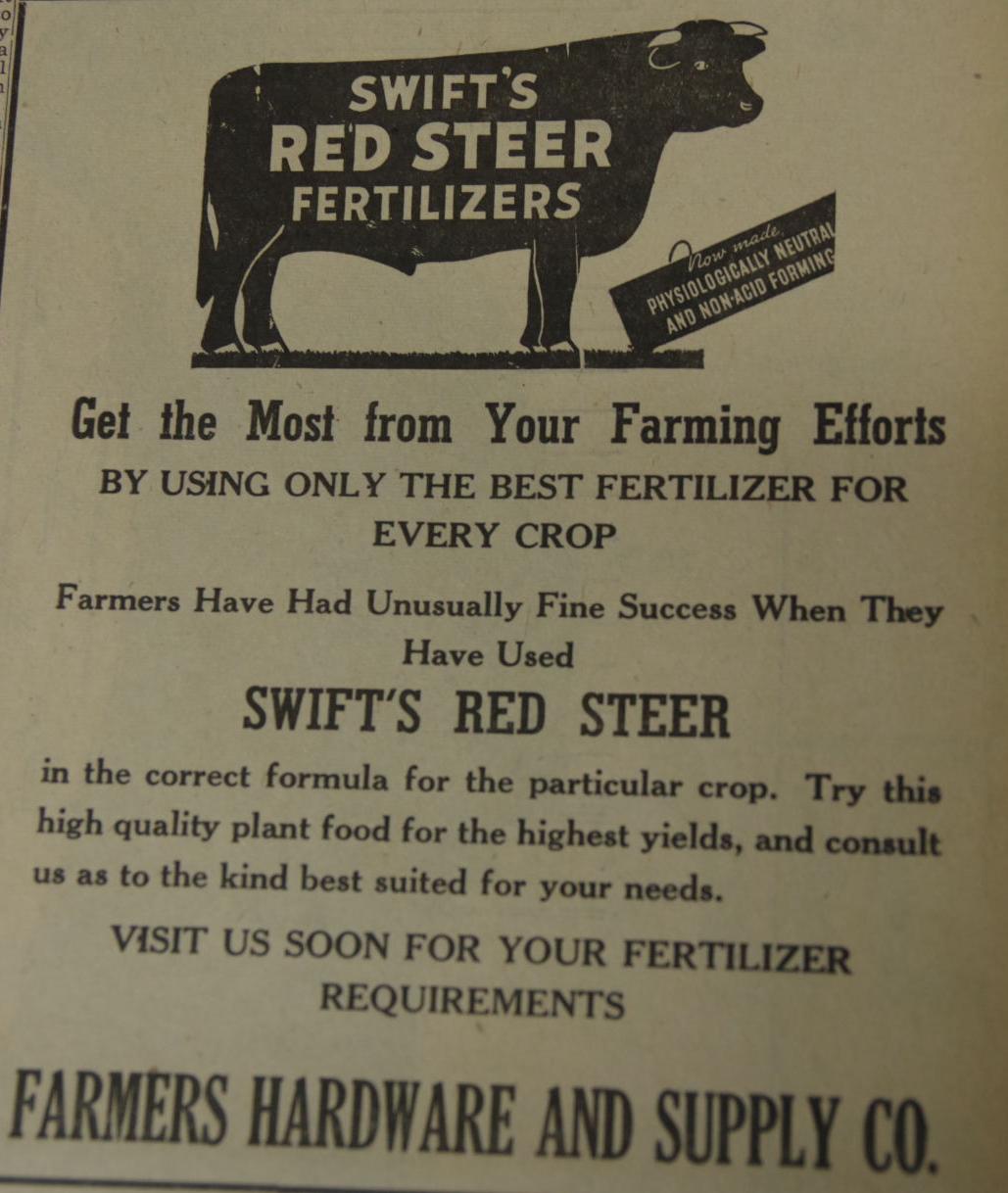 An advertisement for Swift’s Red Steer Fertilizer as seen in a 1950 edition of the Watauga Democrat.

Dave Hodges holds up a mini washboard in a Jan 29, 1970, article in the Watauga Democrat.

People stand in watch as firefighters put out a fire at the Appalachian Theatre in 1950.

Part of the Appalachian Theatre burns as shown in a Jan. 26, 1950 article in the Watauga Democrat.

Part of the Appalachian Theatre burns as shown in a Jan. 26, 1950, article in the Watauga Democrat.

An advertisement for Swift’s Red Steer Fertilizer as seen in a 1950 edition of the Watauga Democrat.

“A fire originating in a backstage popcorn machine, swept through the Appalachian Theatre last Saturday afternoon, bringing a loss of $75,000 to $85,000, but the emergency was so skillfully handled by the management that the more than 500 men, women and children, assembled in the playhouse, made an orderly exit just ahead of the raging flames,” a Jan. 26, 1950 article in the Watauga Democrat stated.

The article stated that Bob Agle, district manager for the Appalachian Theatre chain, and Jay Beach local theatre manager, conducted the evacuation when “It became apparent that the blaze could be handled with the available fire extinguishers.”

“A tank of cooking gas exploded in the rear just as the last of the throng reached the sidewalk, and the flames reached the front doors.

“The local volunteer fire department went into action, while distraught parents searched through the milling throngs of spectators for their children, who had been enjoying a western film,” the article stated.

Boone and Blowing Rock firefighters conducted the fight “against the roaring flames.” The article stated the blaze never seriously threatened other structures in the downtown business block, but smoke and water damage did affect some businesses.

“The building, the property by Mr. W. R. Winkler of Boone” was “one of the most modern in this section of the state and was built in 1937.

“The roof structure was destroyed, with exception to the big supporting beams, which were never allowed to become hot enough to impair their strength. The walls, likewise, are undamaged, but floors, seats, projection machinery, carpeting, etc., were destroyed,” the article stated.

Winkler was quoted in the article saying “I wish to convey my sincere thanks to the Boone and Blowing Rock fire departments for their most effective work in combating the blaze. I am likewise deeply appreciative of the volunteer service rendered by many of the other people in the town as well as from a number of county people. Agle and Beach are to be felicitated for their fine demeanor in evacuating the building and preventing the usual panic, which would most likely have had fatal results.”

“A mass vaccination program is being planned against German Measles (Rubella) for Watauga County,” an article in the Jan. 29, 1970 issue of the Watauga Democrat stated.

The article explained how a German Measles epidemic was expected in the spring of 1970 so a number of groups got together in an effort to lessen the toll on unborn infants in the county.

“Carl Tuttle, director of the District Board of Health, states that there are 4,300 children in Watauga County that will need to have the first vaccine. He says that if 50 percent of them can be reached before the epidemic is expected, ‘we will be on our way to averting the tragedy that could be ours.’”

The vaccine program was aimed at the group most susceptible to Rubella: ages one to 12, the article stated.

As to where there could be vaccine clinics, the article stated that “Dr. Swanson Richards, Superintendent of Watauga County Schools, said he feels certain the County Board of Education will let local schools buildings be used if they are needed” — just like current WCS Superintendent Scott Elliott said in January that the schools could be sued for vaccinations.

“Speaking of the devastation reaped by the Rubella epidemic in 1964, Mrs. Ayers said ‘We cannot let this one come and destroy literally thousands of unborn babies. Even if the baby lives, he could be blind, deaf, mentally (disabled) or have heart defect,” the article stated.

“Sheriff’s dispatchers and spokesmen for police departments in a 150-swatch across northwest North Carolina and southwest Virginia reported receiving more than a dozen calls Saturday night from people who saw strange lights in the sky,” the Watauga Democrat reported in a Jan. 29, 1990 edition.

The article stated there was one sighting in Ashe, Davie and Watauga counties each.

“Watauga County Sheriff Red Lyons said the one call came from a man in the Bamboo area of Boone. He said the man reported seeing a ‘big ball of fire’ with sparks flying behind it.

“The man said he saw the unidentified object in the southeastern area of the sky toward Blowing Rock and the Aho area,” the article stated.

According to the article, police from Smith Mountain Lake and Christiansburg, about 150 miles from Watauga County, also received calls for the same sighting.

“A physics and astronomy professor at Appalachian State University said a meteor shower at this time of year would be rare.

“Dr. Dan Caton, director of ASU’s Dark Sky Observatory, said he had not seen the object, but from what he had heard about the sighting, it was probably a stray meteor, similar to another one sighted recently,” the article stated.

Caton was quoted as saying, “If one of those things hit, you’d know it.”