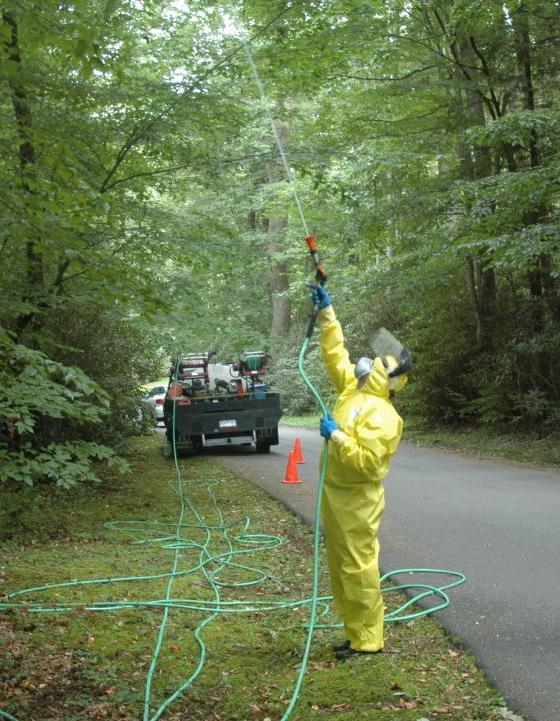 Arborist Lear Powell sprays high to apply a mixture of Distance and Safari pesticides on Aug. 24 to beech trees just off N.C. 105 near Linville. 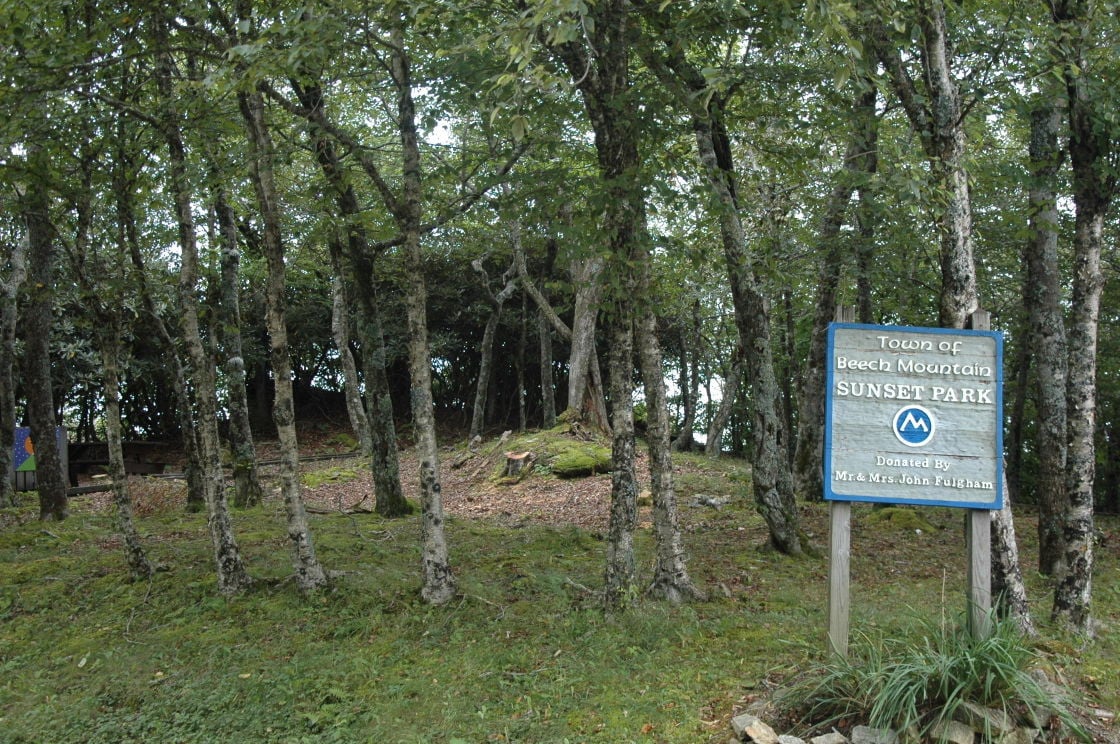 Sunset Park in Beech Mountain was one of four local sites sprayed in an attempt to stop Beech Bark Disease.

Arborist Lear Powell sprays high to apply a mixture of Distance and Safari pesticides on Aug. 24 to beech trees just off N.C. 105 near Linville.

Sunset Park in Beech Mountain was one of four local sites sprayed in an attempt to stop Beech Bark Disease.

But in a matter of only a few years, there may in fact be quite a bit of dead wood in the mountaintop community, as its signature beech trees are under siege by an invasion of Beech Bark Disease. Town leaders, with assistance from Avery County Cooperative Extension staff and local arborists, have launched a fight to preserve their namesake trees.

Avery County Extension Director Jerry Moody and local arborist Lear Powell spent much of the past week spraying beech trees in Beech Mountain and surrounding areas hoping to find a chemical combination to stop the disease, which has devastated American beech trees for the past century while slowly making its way south from Nova Scotia.

“This is a major concern,” said Kate Gavenus, Beech Mountain’s director of tourism and economic development. “The tree is what the town is named after.”

Beech Mountain town manager Ed Evans expressed the same sentiment, but said he didn’t think loss of the namesake trees would hurt the town’s tourism, which draws skiers in the winter and outdoor enthusiasts attracted by mild temperatures in the summer.

“I don’t know if there would be much of an economic impact,” Evans said. “But you look around up here and what you see are beech trees. We want to do everything we can to keep them.”

Dead beech trees are more than an eyesore – they constitute a dangerous hazard. Their brittle limbs are easily snapped by wind, making them potentially costly projectiles on the breezy mountain.

“When they die, you have to cut them down,” Evans said.

Beech Mountain provided up to $500 for Powell to spray “about 40” beech trees at the town’s Sunset Park near the top of the mountain. Moody and Powell are spraying three other small plots in Avery County with one or two pesticides, which Moody said costs about $75 per 100 gallons.

Moody first warned Beech Mountain about the arrival of Beech Bark Disease about two years ago. Since then, thousands of area trees have become infected. Moody said only about 3 percent of beech trees across the nation have shown significant resistance to the disease.

With no effective treatment known for the disease, Moody and Powell have focused on finding a pesticide to kill the beech scale insect, Cryptococcus fagisuga Lindinger, which eats holes into the bark, providing easy access for fungal pathogen Nectria coccinea.

“It’s all an experiment,” Moody said. “We don’t want people to think by spraying we’re going to stop it. People from up north tell me it isn’t happening here the way it did there. It’s spreading a lot faster here.”

Unlike hemlock, which can be treated successfully with one injection near the trunk, an entire beech tree must be sprayed to have any chance of success.

Powell, who has studied data from Bartlett Tree Experts, an international tree and shrub care company, is more optimistic. He said the key to saving the region’s beech trees would be holding the invasion to its current scale through regular spraying. He said he was hopeful more than half the area’s beech trees could be saved.

Powell said that if a successful pesticide were found, he was hopeful it would be needed to be applied only once every two years.

Moody theorized that because beech – sometimes called “carving” trees – have little or no commercial value, little effort has been made to find a successful pesticide to stop the disease.

The first visible sign of a beech scale insect infestation is a woolly, white, waxy covering that the insect secretes on the tree. A reddish-brown fluid oozing from the wound site is an early sign of the Neonectria fungi. Later, perithecia forms around the dead spot.

Infected trees have small, sparse and yellowed foliage. Cracked bark and cankers are noticeable symptoms on the bole.

The best news, according to Moody and Powell, is that nature typically fills the void of a dying species.

At Sunset Park, tiny stumps are all that’s left of dozens of infected beech, leaving areas cast perfectly for the enchanted forest at the deserted Land of Oz theme park nearby. Many of the park’s remaining beech trees have brittle, decaying bark with white insect secretions showing the cause of their demise.

Beech Mountain has an active tree board, but many locals and visitors are unaware of the attack on the town’s dominant tree.