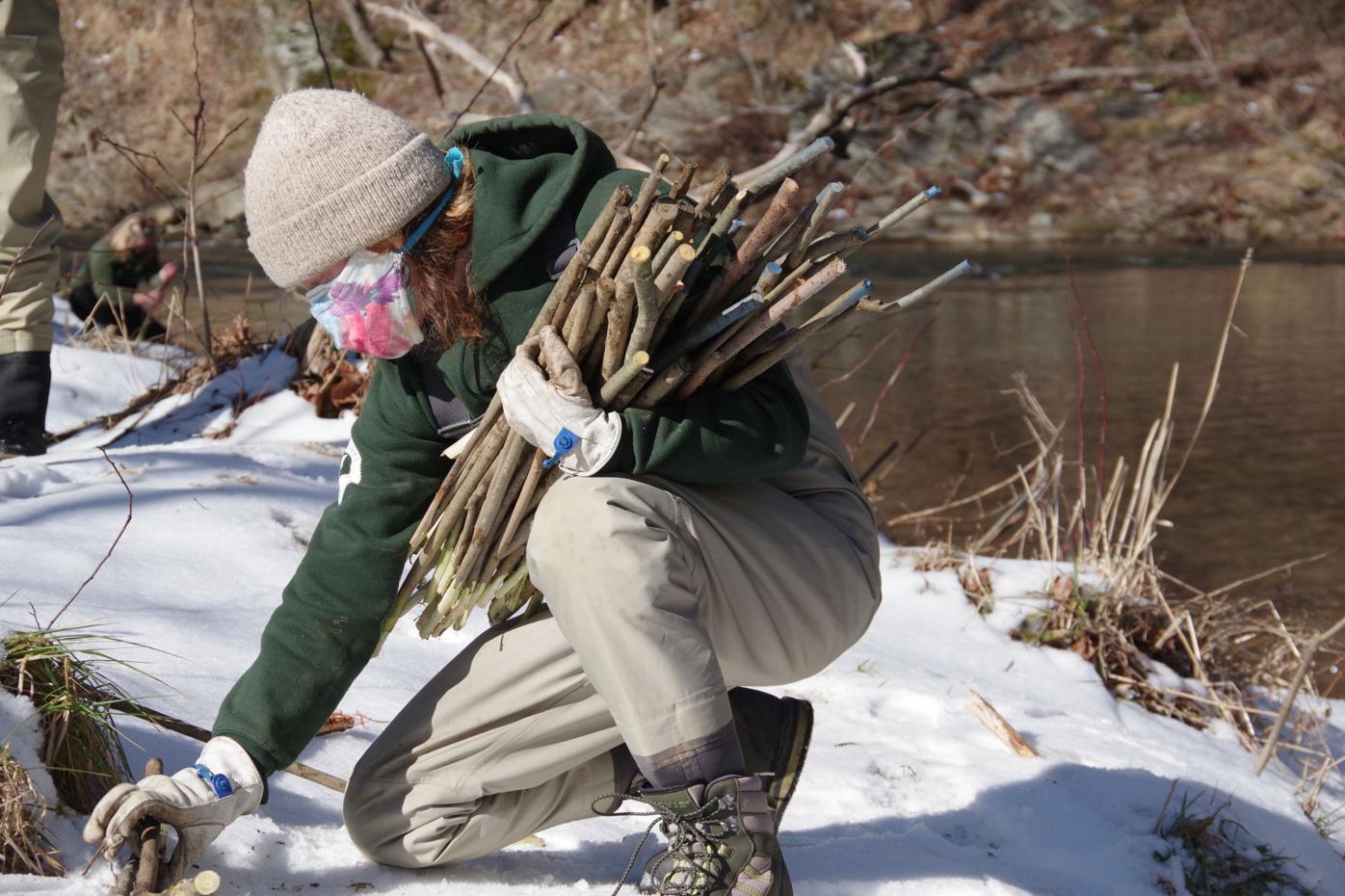 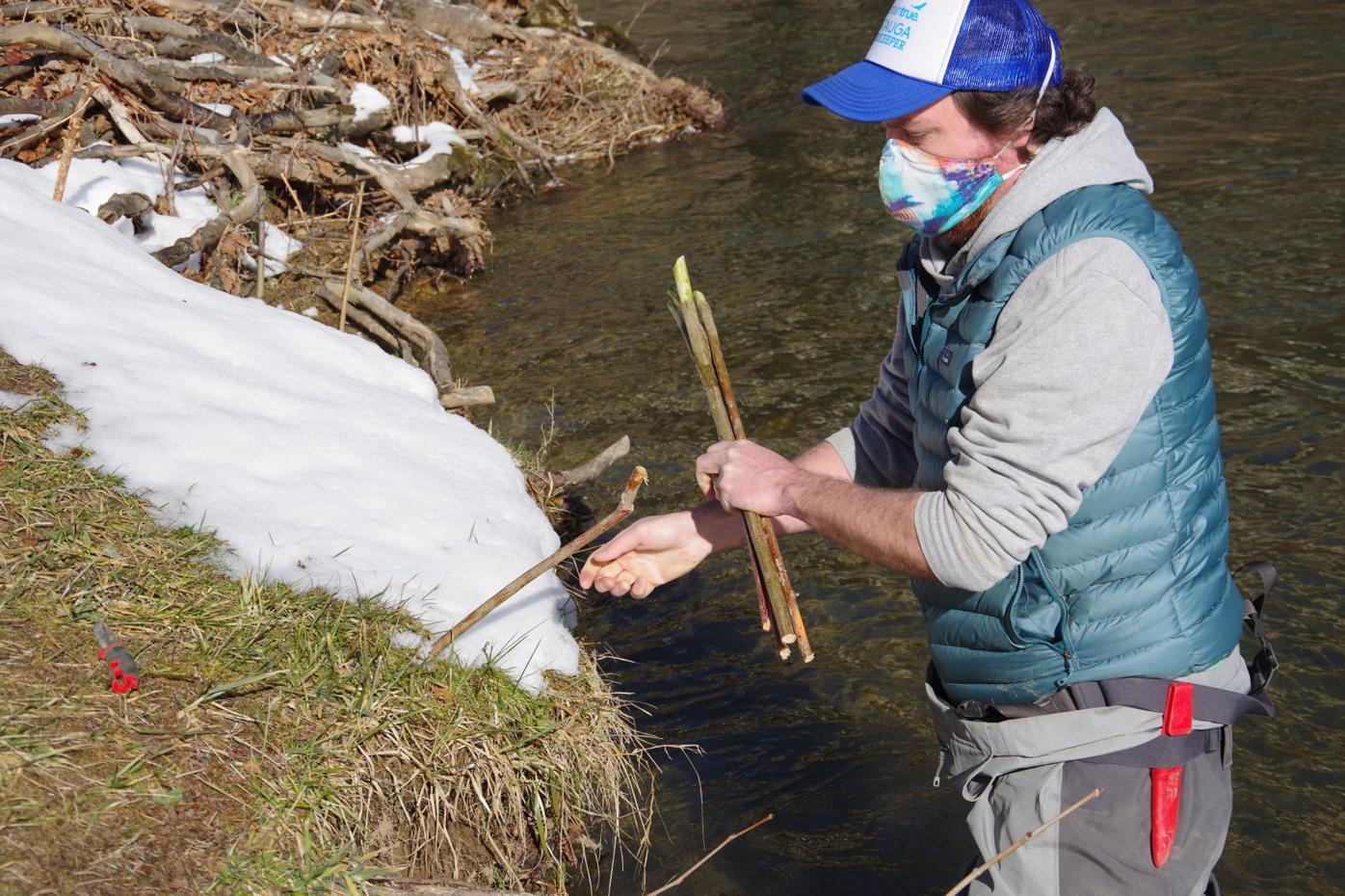 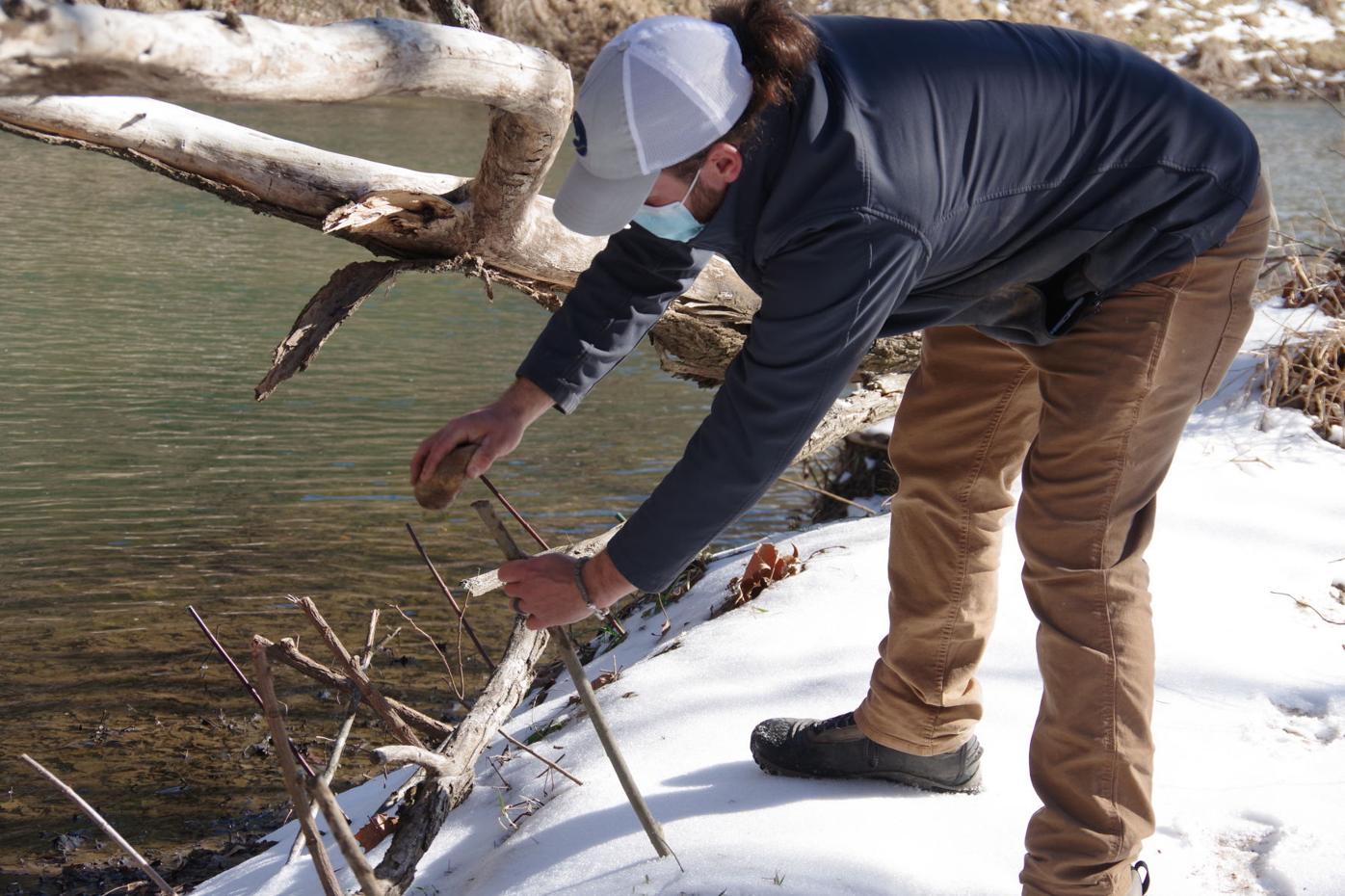 Gregory Nance pounds in a live stake into the frozen, snow covered ground at a live staking event on Feb. 6. 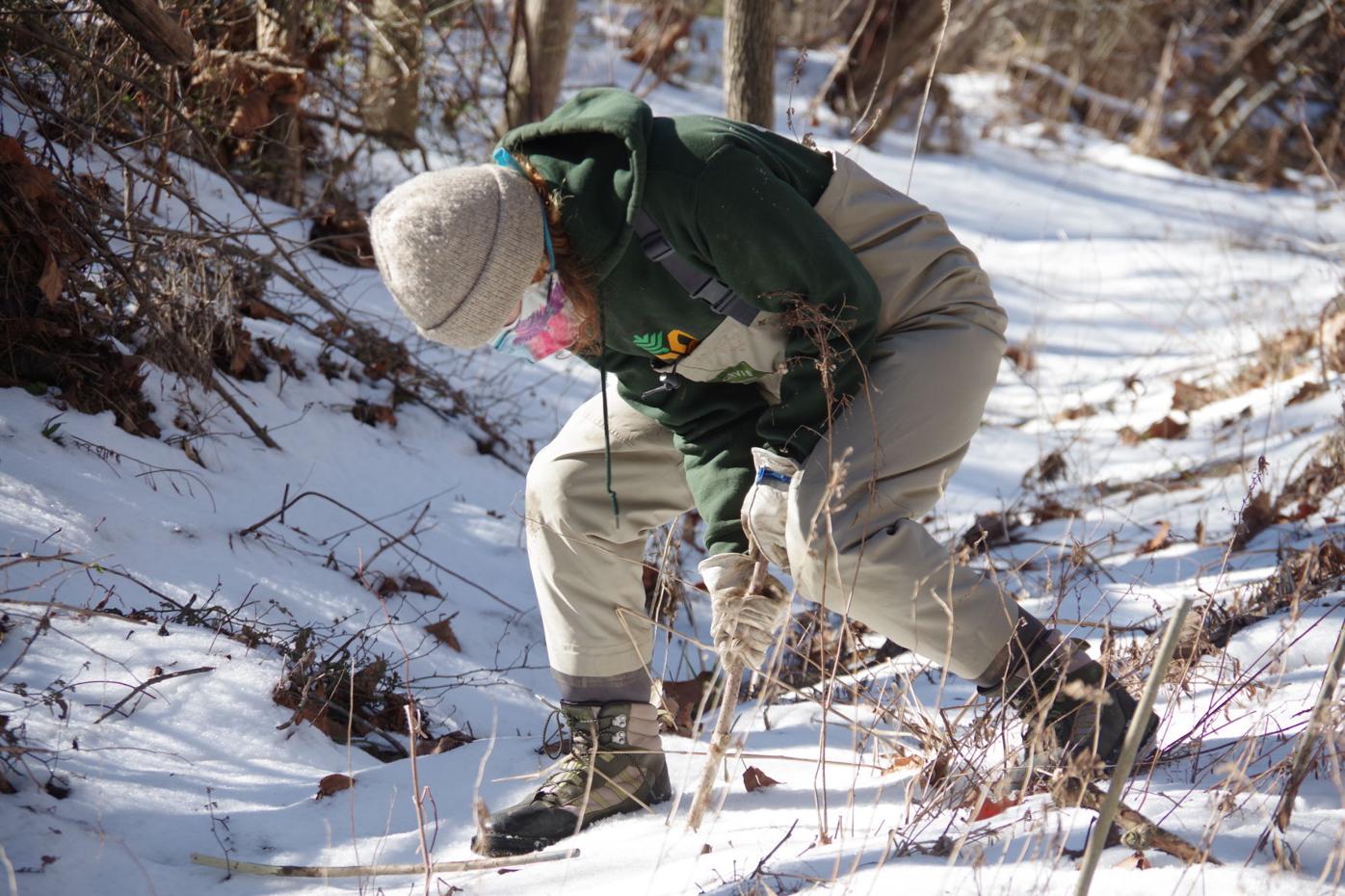 Rachel Milkereit pushes a stake into the hard ground on Feb. 6 at a live staking event. 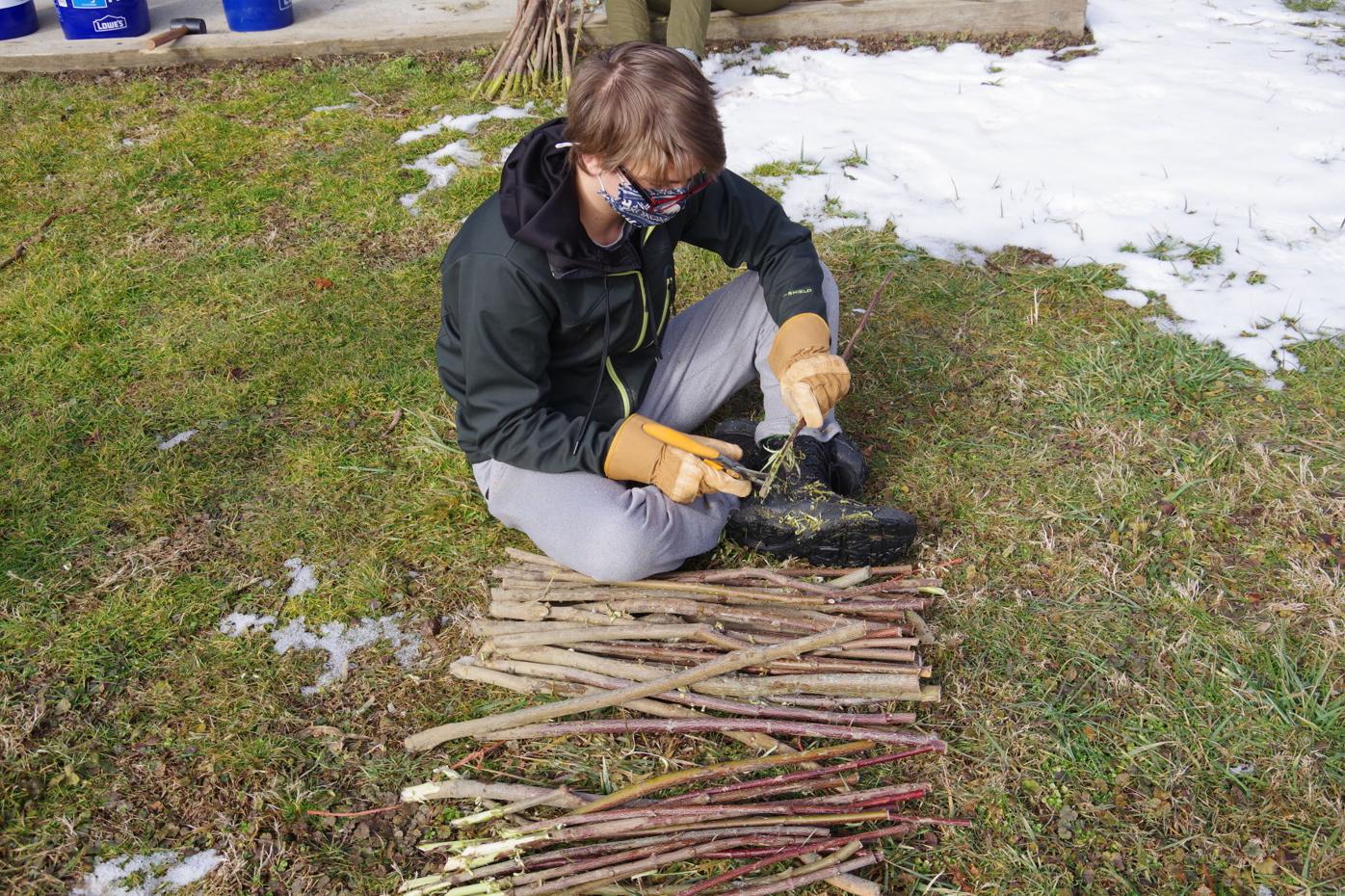 Jacob Woodburn shaves off some of the tree cuttings so the root system can grow.

Gregory Nance pounds in a live stake into the frozen, snow covered ground at a live staking event on Feb. 6.

Rachel Milkereit pushes a stake into the hard ground on Feb. 6 at a live staking event.

Jacob Woodburn shaves off some of the tree cuttings so the root system can grow.

WATAUGA — MountainTrue and the Watauga Riverkeeper are combating sediment erosion in local waterways by planting trees along river banks.

MountainTrue is an environmental organization working in 23 counties in western North Carolina — including Watauga, Ashe and Avery — with core goals that include working toward sensible land use, restoring public forests, protecting water quality and promoting clean energy. The Watauga Riverkeeper is part of MountainTrue.

The live staking event on Feb. 6 — one of 10 planned throughout the winter — brought community members to the banks of the Watauga River where they learned ways to prevent erosion particularly through planting trees, or live staking.

Volunteers take tree cuttings, which were provided by Foggy Mountains Nursery in Ashe County, and score, or shave, a little bit off the thicker end. Andy Hill, the Watauga Riverkeeper and High Country regional director for MountainTrue, said the stakes then get planted in the riparian zone — from the waters edge to the top of the bank.

“Vegetated buffers are critical for ecosystem health,” Hill said. “It shades the stream and keeps it cool, but it also stabilizes the bank and prevents erosion. The buffer is really important to a river ecosystem because it will filter stormwater runoff and help keep pollutants from entering the river.”

Hill said the Watauga River is getting wider and shallower due to more frequent flood events. This can cause the bank to fail, which gets worse over time .

“The live staking will create a new root system and catch sediment and hopefully help (the bank) fill back in,” Hill said.

Hill said the live staking events are one of the more popular volunteer events for MountainTrue as people get to see the benefits of what they are doing right away. On Feb. 6, roughly 20 volunteers planted 1,500 cuttings of elderberry, silky willow and silky dogwood, which Hill said are native to the area.

Ava Stoddard said the Feb. 6 event was the first event she participated in and plans to do more.

“I’m excited,” Stoddard said. “I’ve been looking for more opportunities to get into the community and kind of get off campus and do things, so I was really excited about this opportunity.”

Claire Martin was another volunteer at the live staking event. She said she was friends with one of the organizers, but was also looking for a way to get outside. She has worked as a volunteer with MountainTrue before.

“I like planting and care about the river,” Martin said.

Other volunteers, like Gregory Nance of the Catawba Riverkeeper Foundation, were volunteering to see how he could bring events like live staking to his basin.

The Feb. 6 event was the first time Nance participated in an event with MountainTrue.

Hill said they plan to plant 15,000 tress over the course of 10 work days. Roughly 75 percent of the trees MountainTrue plants each year survive depending on conditions which Hill said is why they plant so many.

Hill said the organization typically focuses on public lands, but will also do events on private property that has a river bank that needs reinforcing. Those who want more information can contact hill at andy@mountaintrue.org.

The next live staking event is Feb. 20 at the Guy Ford River Access in Sugar Grove from 10 a.m. to 2 p.m. More information on how to volunteer can be found at mountaintrue.org/event/live-staking-workday-5/.