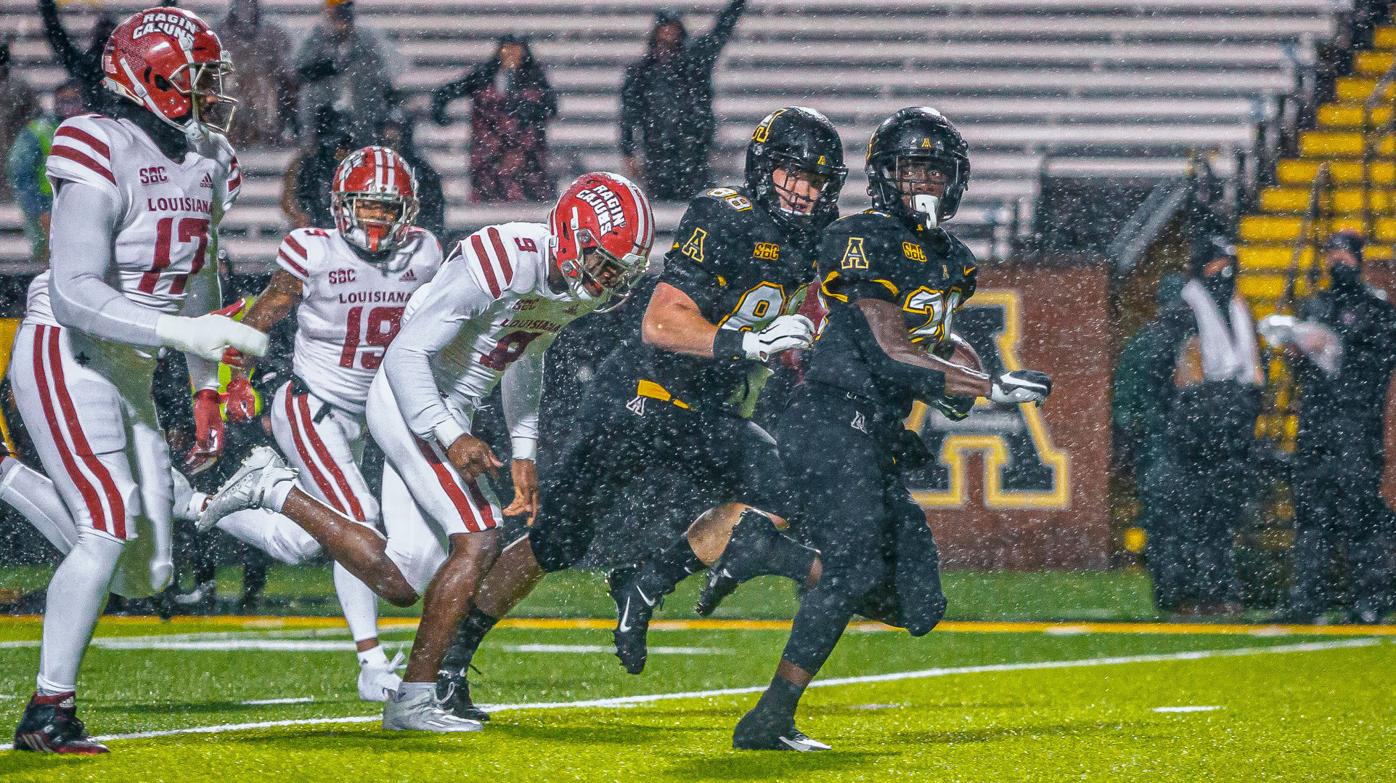 App State’s freshman running back Nate Noel glances around to see who might catch him as he he sprints to the end zone for the game’s first score. Louisiana snapped the Mountaineers 8-game win streak over them, edging Appalachian 24-21 at Kidd Brewer Stadium on Friday, Dec. 4. 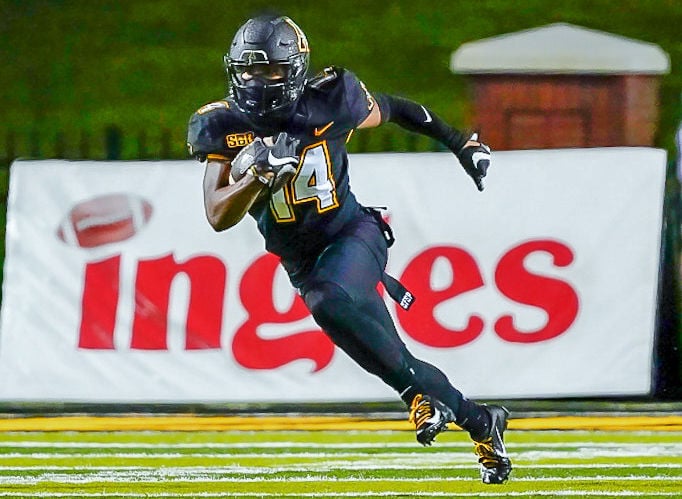 App State’s freshman running back Nate Noel glances around to see who might catch him as he he sprints to the end zone for the game’s first score. Louisiana snapped the Mountaineers 8-game win streak over them, edging Appalachian 24-21 at Kidd Brewer Stadium on Friday, Dec. 4.

Thanks largely to three Mountaineer turnovers, the Ragin’ Cajuns survived a myriad array of head-scratchin’ miscues of their own to edge App State, 24-21.

Cold, wet and windy conditions usually favor the Appalachian team, who often practice in what the lowlanders and swamp dwellers think of as miserable conditions. Certainly that looked to be the case early in the Mountaineers’ last home game of the season when the Louisiana long snapper not once, but twice sailed the ball over the punter’s head in the first quarter, then followed up with an awkward snap on a PAT attempt later in the first half.

The usually reliable long snapper for Louisiana, redshirt junior Paul Boudreaux, knew he was having a bad night when he sailed yet another ball over the head of punter Rhys Byrns midway through the fourth quarter and into the end zone. Byrns promptly kicked the ball out of the back of the end zone for a safety, allowing App State to tighten the deficit to 24-19. The safety also gave the ball back to the Mountaineers with more than six and a half minutes remaining in the game.

At that point, if the Mountaineers could have manufactured a typical clock-eating offensive possession that produced a TD likely would have won the game and sent the bayou bandidos packing.

But that was not to be.

Given the number of bizarre plays and unusual decisions by Louisiana, as well as the three Appalachian turnovers in this game, those watching might have thought it was being played in late October, on Halloween night.

App State was unable to capitalize on the mid-fourth quarter gift. The Ragin’ Cajun defense limited the Mountaineer offense to a 10-play series that gained just 33 yards. App State took almost four and a half minutes off of the game clock before senior QB Zac Thomas was sacked on 4th-and-9 at the visitors’ 23 yard line.

Game over? With just 2:09 remaining, there were few scenarios where Louisiana would not come away with the program’s first win over the Mountaineers.

Such an outcome would shortly become anything but certain. Starting from their own 27 yard line, all Louisiana needed to do was move the chains at least once and maybe twice. Get a first down.

But App State’s defense was up to the challenge. They held ULL to just a couple of rushes for eight yards, then an incomplete pass.

On fourth and two, the Ragin’ Cajuns offered their hosts yet another gift. Instead of risking another punt attempt or “going for it” on fourth down, LA quarterback Levi Lewis took the snap and sprinted backwards into the end zone and out the back, giving up a second two-point safety to the Mountaineers in the period.

Thomas and his Mountaineer offensive compatriots got the ball back looking at a 24-21 deficit, but with 1:41 left and good field position on their own 45-yard line. A field goal would tie the game and send it into probable overtime. A touchdown results in an improbable win.

It was almost the latest in miracle Mountaineer comeback wins but, as they say, “...close only counts in horseshoes and hand grenades.” Thomas completed a couple of passes to senior wide receiver Thomas Hennigan. Next, a defensive pass interference penalty called against Louisiana’s Mekhi Garner while defending App’s always dangerous senior wide receiver Jalen Virgil gave the Mountaineers a first and goal on the Cajuns’ 13-yard line.

One play later, Hennigan was unable to get to a pass on the right side of the end zone. The referees ignored his pleas for a pass interference call, even though television replays showed that he probably had a good case. Another pass attempt to Virgil fell incomplete. It was third-and-10, but the Mountaineers could not risk two more attempts at scoring a TD with only five seconds left on the game clock.

Enter Chandler Staton, Mountaineer placekicker extraordinaire. The situation was primetime for the senior, who in the second quarter had slotted a 43-yard field goal that made him the all-time leading scorer in Sun Belt Conference history. So a 30-yard chip shot for the veteran — who has made many a game-clincher in his four years at Appalachian — was almost a certainty to send the game into overtime. Except it wasn’t.

Only one second left. ULL’s Lewis only had to take a snap and take a knee. Game over.

Staton’s miss was far from the reason Appalachian fell short in this game. To coin a phrase, it was just one play in a comedy of horrors acted out by both teams.

The Mountaineers took their first possession 65 yards in 18 plays. Freshman running back Nate Noel scampered 33 yards to finish the drive. The ease with which they moved the football probably had the oddsmakers in Las Vegas nervous about only making Louisiana a 3-point underdog, in spite of the Ragin’ Cajuns’ No. 25 nod in the most recent College Football Playoff rankings. The Mountaineers seemed ready, capable and determined to not let Louisiana be the third nationally ranked team to hand them a loss in the 2020 season.

But the visitors from Lafayette saw their defense stiffen and limit the Mountaineers just to Staton’s field goal for the remainder of the first half. After all of the miscues and mistakes, ULL found themselves only down by one point (10-9) as the teams went into their respective locker rooms for halftime.

Meanwhile, the Louisiana defense’s ability to pick off a Thomas pass early in the third quarter and then force a punt on the next possession gave the bayou boys a seemingly insurmountable lead (24-10) going into the final quarter.

The earlier described sequence then took place that almost handed the game to App State from the very jaws of defeat.

Statistically, if you take away the turnover category, Appalachian State was the likely winner. Consider:

Sports fans should also consider the three App State turnovers vs. none by ULL. Louisiana also had three sacks (2 INTs, one lost fumble) while App State had zero. And taking into account the penalties for App State at five for 46 yards with ULL only having two for 20 yards, the turnovers, sacks and penalties combined to give the visitors a decided edge.

Individually, Thomas completed just 10-of-21 passes for 92 yards, no TDs and two INTs. His ULL counterpart, Lewis, was also challenged in the wet conditions, completing just 8-of-23 passes for 101 yards, one TD and no INTs.

Mountaineer sophomore running back Camerun Peoples churned up 99 yards of rushing real estate on 21 carries, including a TD. Freshman Nate Noel carried the ball 12 times for 72 yards, including the game’s first TD.

The Ragin’ Cajuns’ rushing stats are a bit deceptive given the negative 104 yards they saw on the bad punt snaps and the intentional safety. Senior running back Elijah Mitchell carried 12 times for 95 yards, while Lewis kept otherwise stalled offensive possessions going with 11 carries for 77 yards. Powerful RB Trey Ragas carried the ball 12 times for 43 yards and two TDs.

After the game, Mountaineer head coach Shawn Clark took the loss in stride, congratulating Louisiana on a hard-fought win and admitting that his guys in the locker room were hurting after the loss.

“But we will bounce back and get ready for Georgia Southern next week,” Clark said in concluding his opening remarks.

On Saturday, Dec. 12, App State will close out the regular season on the road in Statesboro, Ga., in a 6 p.m. encounter with longtime rival, Georgia Southern. The game will be broadcast on ESPN3.