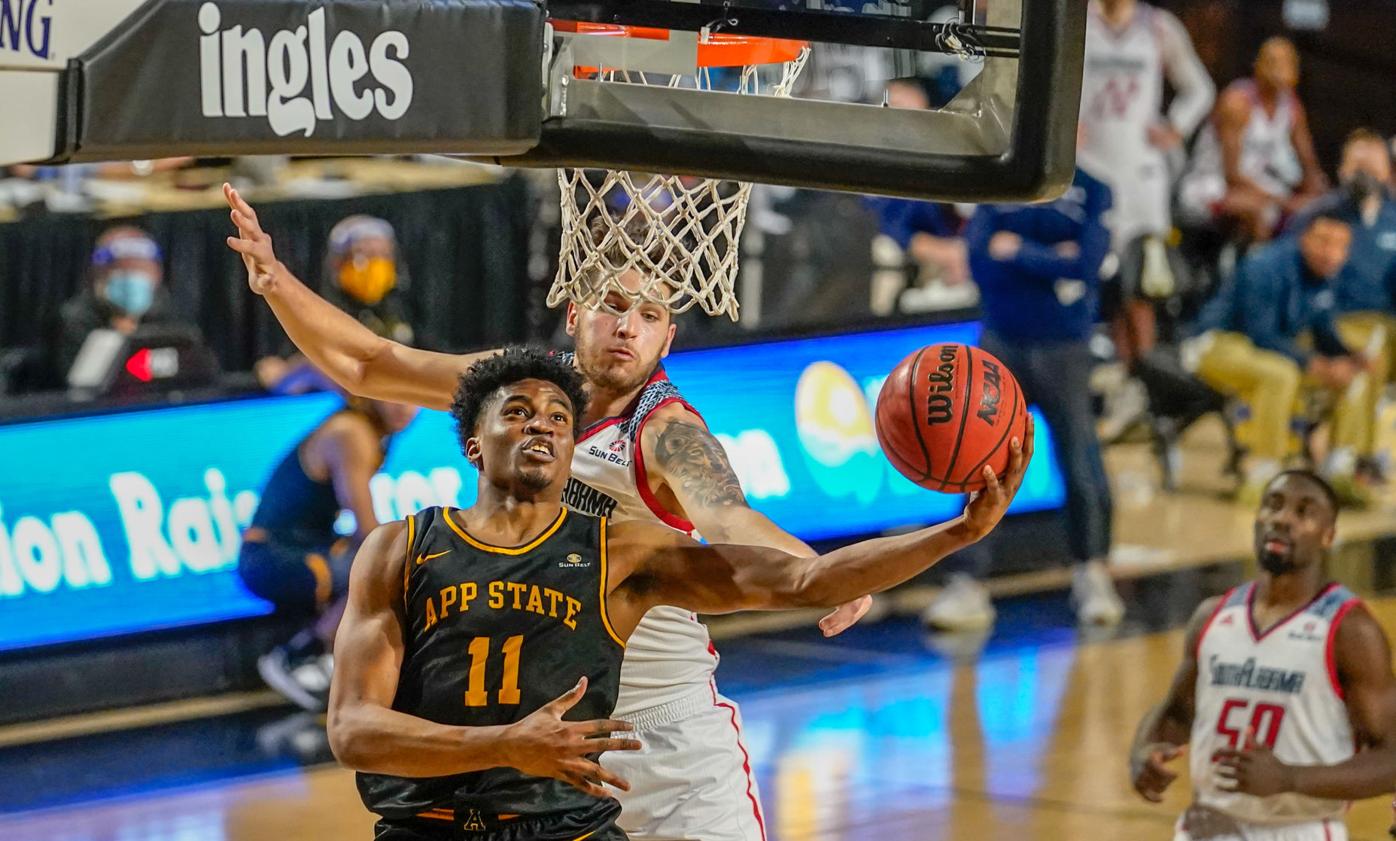 App State forward Donovan Gregory goes up for a reverse layup in the Mountaineers’ 56-54 loss to South Alabama on Feb. 20. 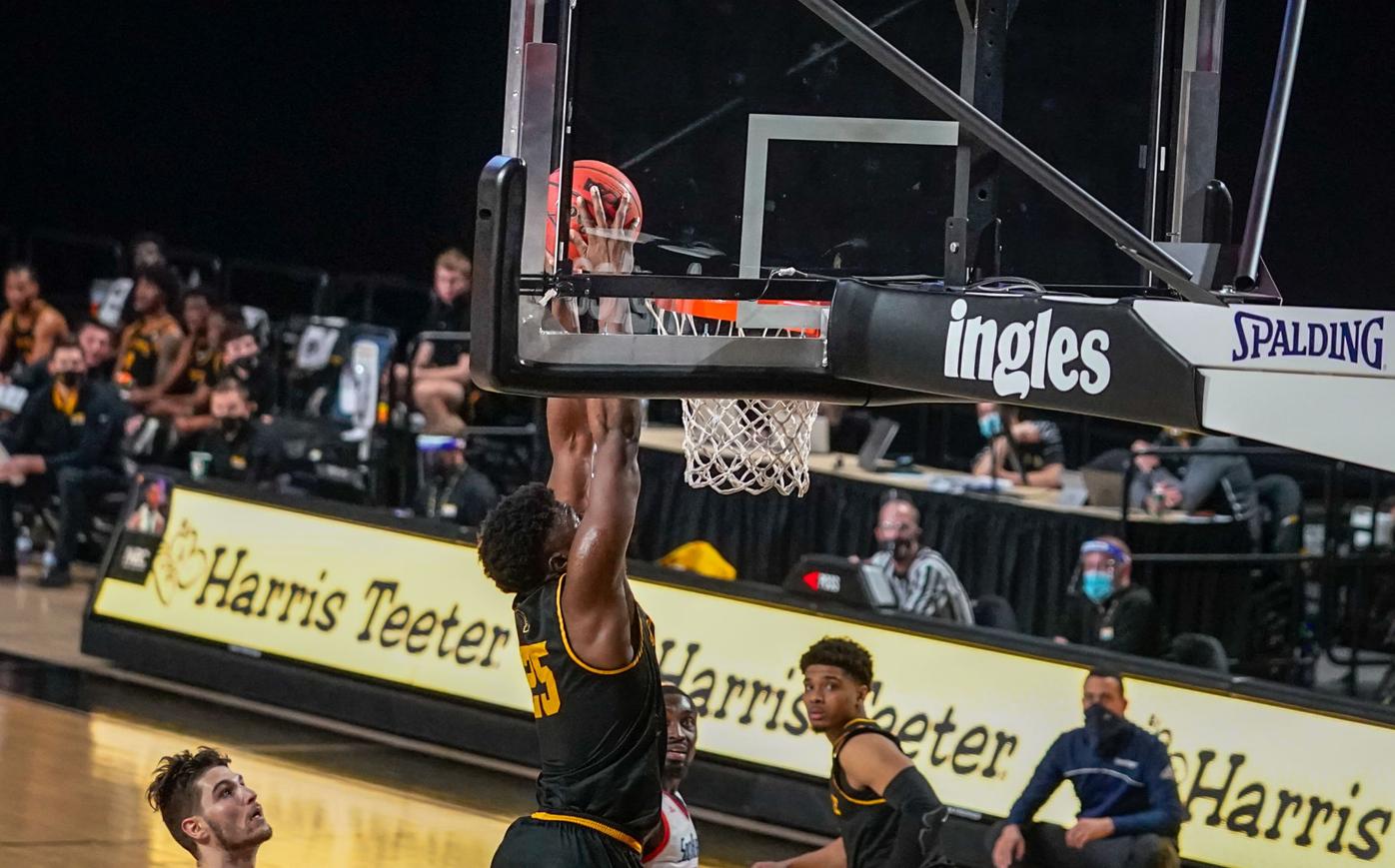 James Lewis, Jr.’s slam dunk in the first half was a highlight of the Mountaineers’ 56-54 loss to the Jaguars of South Alabama, Feb. 20. 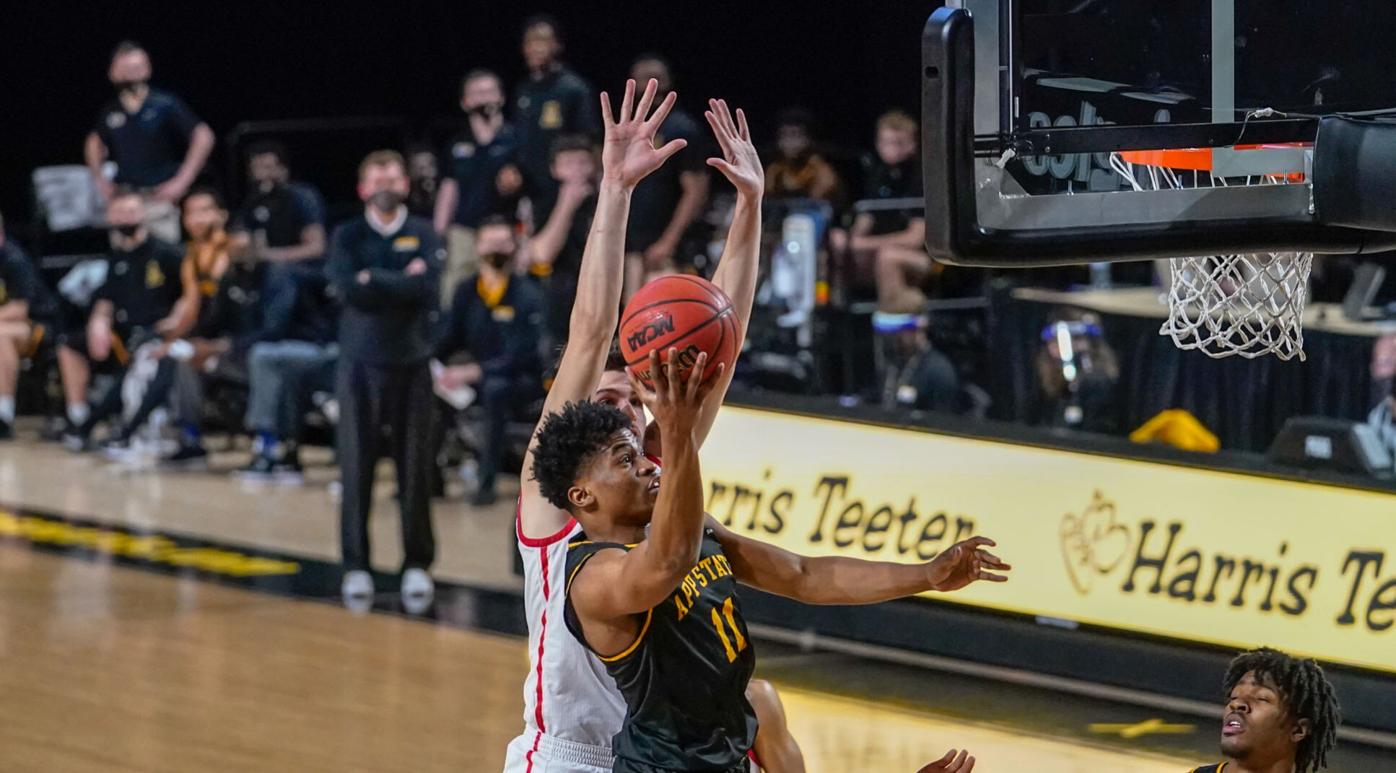 Under pressure, Donovan Gregory (11) seizes an opportunity in App State’s 56-54 loss to South Alabama on Feb. 20 at the Holmes Convocation Center. 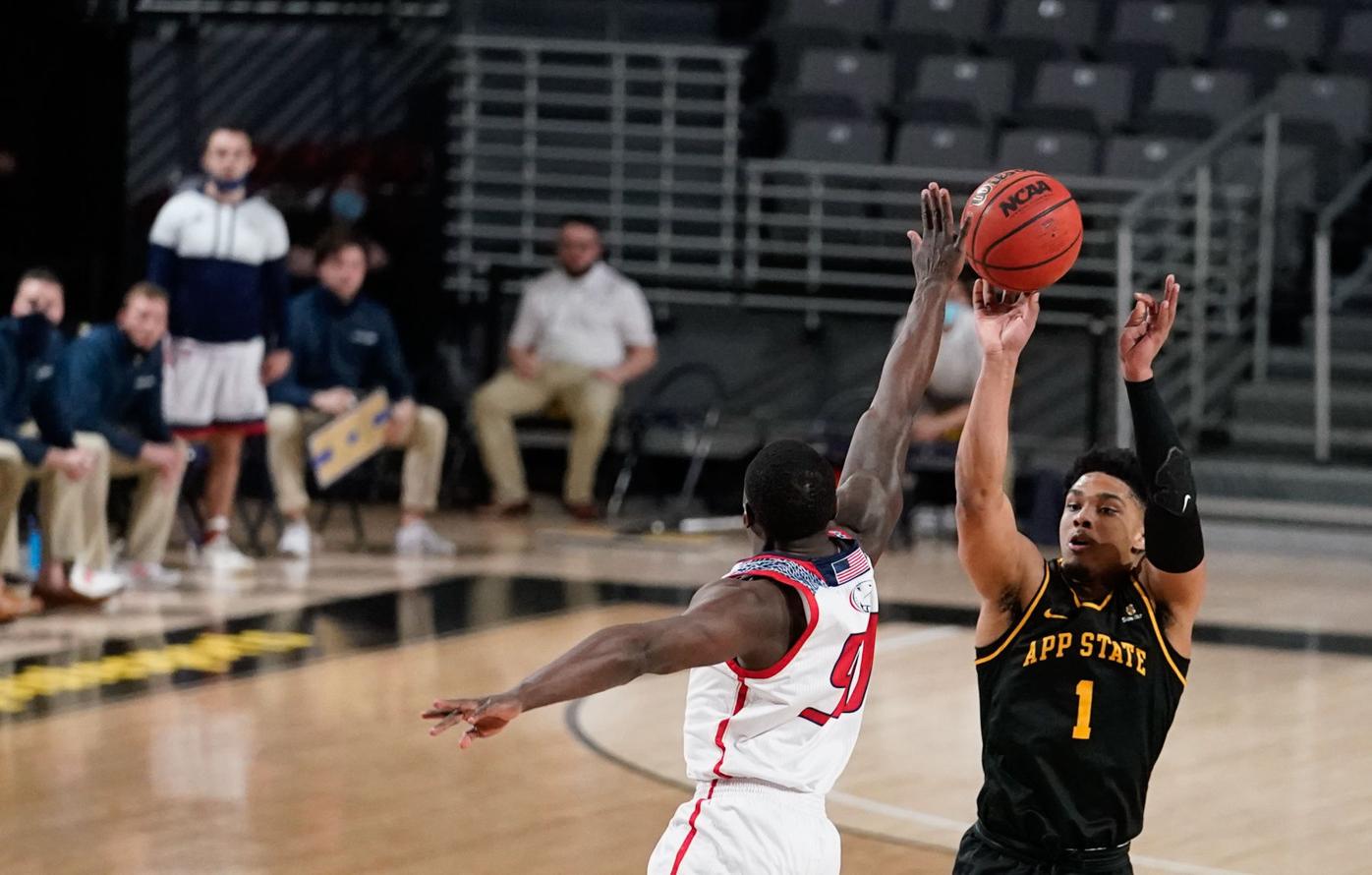 App State guard Justin Forrest (1) lets it fly from long range over a South Alabama block attempt. The Mountaineers lost their second one possession game (56-54) in as many days to the Jaguars on Feb.. 20 at the Holmes Center. 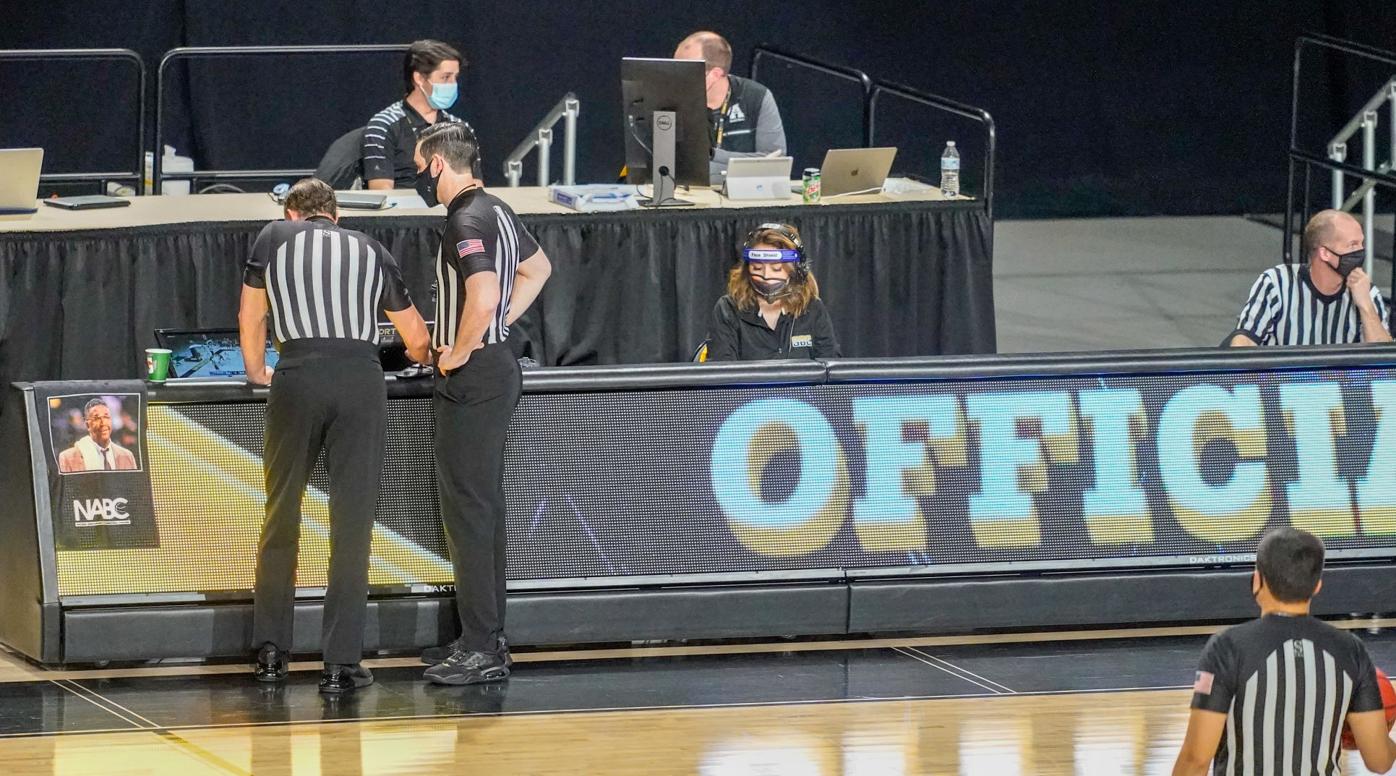 Appalachian State’s men’s basketball game against South Alabama on Feb. 20 at the Holmes Center was stopped twice for lengthy ‘official reviews’ by the game officials.

BOONE — For the second time in as many days, Appalachian State men’s basketball lost a two-point decision to South Alabama, the Sun Belt Conference East Division’s top-ranked team. The loss on Saturday, Feb. 20, came in the last seconds, 56-54.

After falling to the visiting Jaguars in the series opener at the Holmes Center on Friday, 65-63, the Mountaineers hoped to secure a victory on Senior Night in the last home game of the 2020-21 season.

And they almost pulled it off.

A see-saw battle in the first half had the Mountaineers with early momentum, leading by as many as five points, only to see the Jaguars gain the upper hand midway through the half. The visitors from Mobile, Ala., whittled down the App State lead, led by as many as six points with just under six minutes remaining before intermission, then held off a Mountaineer rally to take a nervous, 33-31 lead into the locker room at halftime.

The biggest lead by either team was seven points, which was by South Alabama with 14:29 remaining in the game. A little more than seven minutes later, the Mountaineers took a five-point lead with exactly seven minutes to go and momentum seemed to be on the home team’s side.

First a step-back jumper from behind the 3-point arc by Adrian Delph, then a pull-up jumper for yet another three-pointer by Justin Forrest all but wiped out the Jaguar lead and all in the space of a minute.

After the Mobile crew’s Jamal West put the ball up and in from underneath, the Mountaineers’ graduate transfer Michael Almonacy joined in the long distance fun with yet another APP 3-pointer to tie the game at 44-44, with 11:42 remaining on the clock.

For the next almost three minutes, neither team scored, but at the 9:22 mark Forrest put the Mountaineers ahead for the first time since early in the first half. Then the senior hit again from long range to expand the App State lead to five points. The sparse pandemic crowd of mostly App State players’ parents had reason to hope for an upset.

But like a pendulum swinging back and forth, to and fro, momentum shifted back to the Jaguars.

With 3:01 remaining, USA’s Kayo Goncalves made good on a three-pointer to pull the Jags into a 53-53 tie. App State turnovers, personal fouls, missed shots and South Alabama steals later, and the visitors had a 56-54 lead, but the Mountaineers had the ball and a final chance to tie or win with 16 seconds on the clock.

Almonacy might have won the game with a pull-up jumper from beyond the arc with seven seconds remaining, but the ball clanged off the rim. App State’s “big man,” James Lewis, Jr., came down with the offensive rebound, but amidst the fierce action under the basket his put-back layup with a second remaining was blocked by South Alabama’s Jamal West. The Jaguars forward also collected the rebound to put the game on ice for the SBC East Division leaders.

Forrest led all scorers with 20 points, while Lewis contributed 11 and Donovan Gregory 10 on behalf of the Mountaineers. Goncalves poured in a team-high 18 ponts, while Locure and Michael Flowers added 12 and 11 points, respectively.

Notably, neither side got much offensive production from their reserves coming off the bench, the Mountaineers with five points and the Jaguars with none.

With the win, at 10-5 in conference play and 16-8 overall, South Alabama has a firm grip on first place in the Sun Belt East Division. After the loss, App State falls to fourth place in the East Division, 6-6 in Sun Belt play and a respectable 12-9 overall.

Both teams have Georgia on their minds as they complete regular season play. South Alabama hosts Georgia State on Feb. 26 and 27, while the Mountaineers will be on the road. First they traveled to Atlanta to face Georgia State on Tuesday, Feb. 23.

They then will move on to Statesboro to challenge Georgia Southern in a two-game set, Feb. 26 and 27.