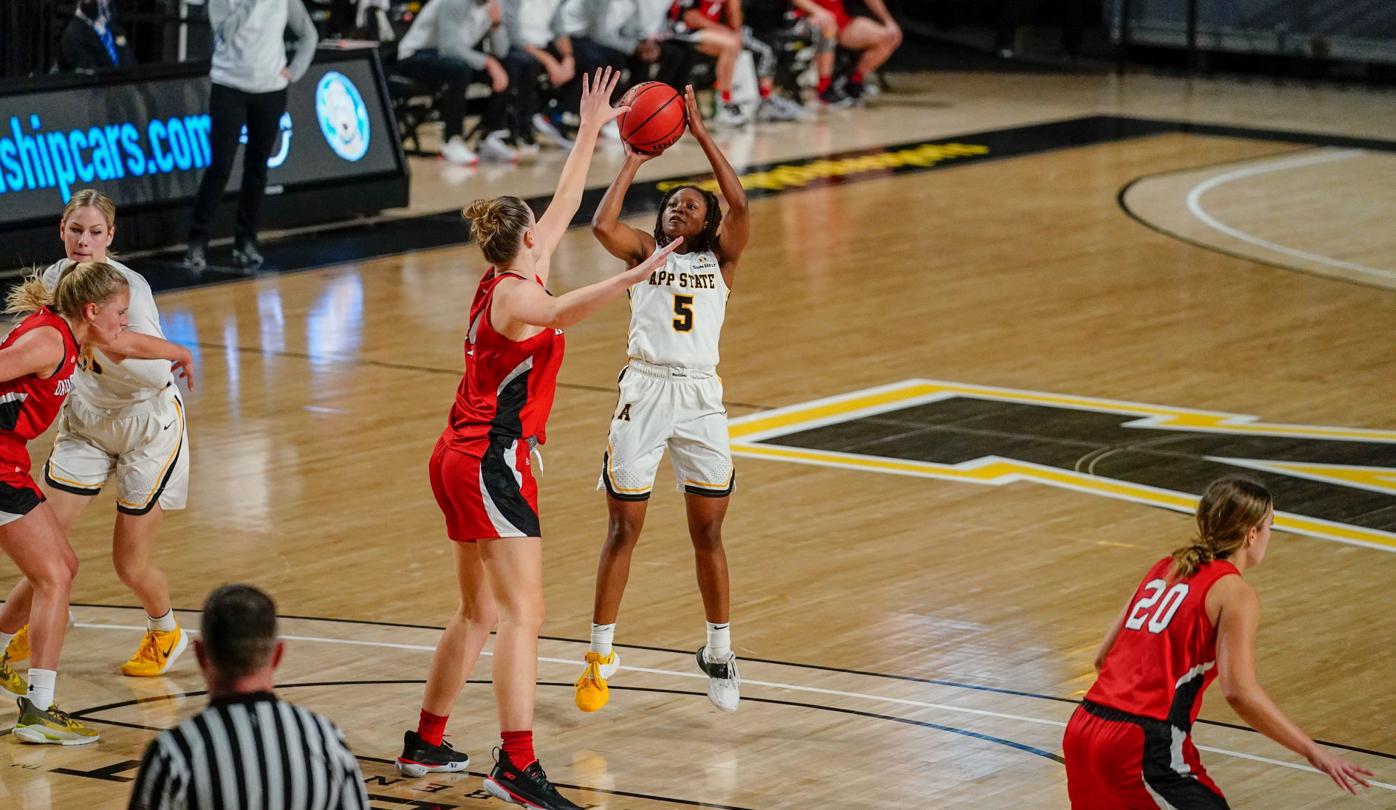 Pre Stanley (5) fires a long two against Davidson on Dec. 11. Stanley finished the game with 26 points. 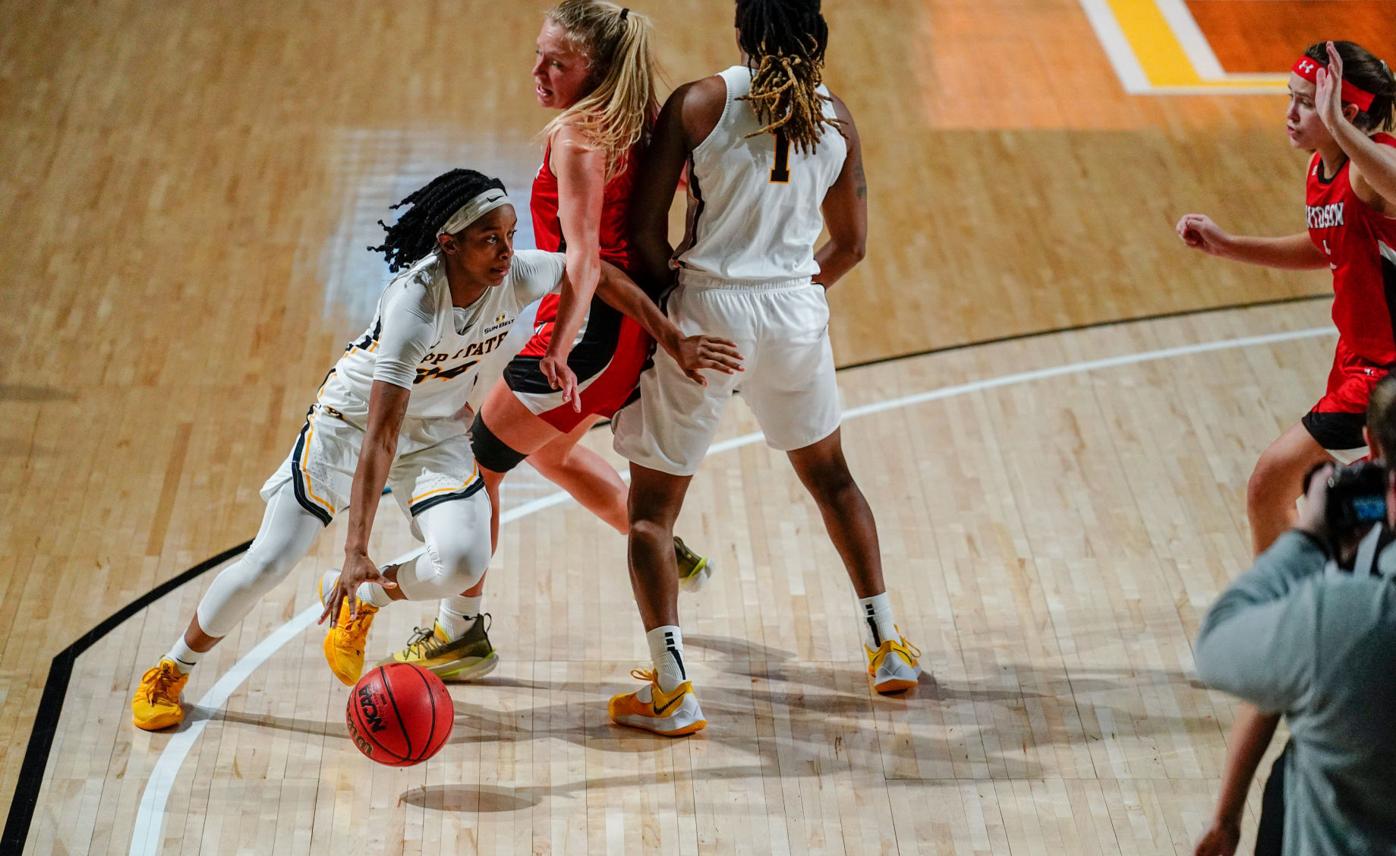 Janay Sanders (24) driving inside against Davidson on Dec. 11. 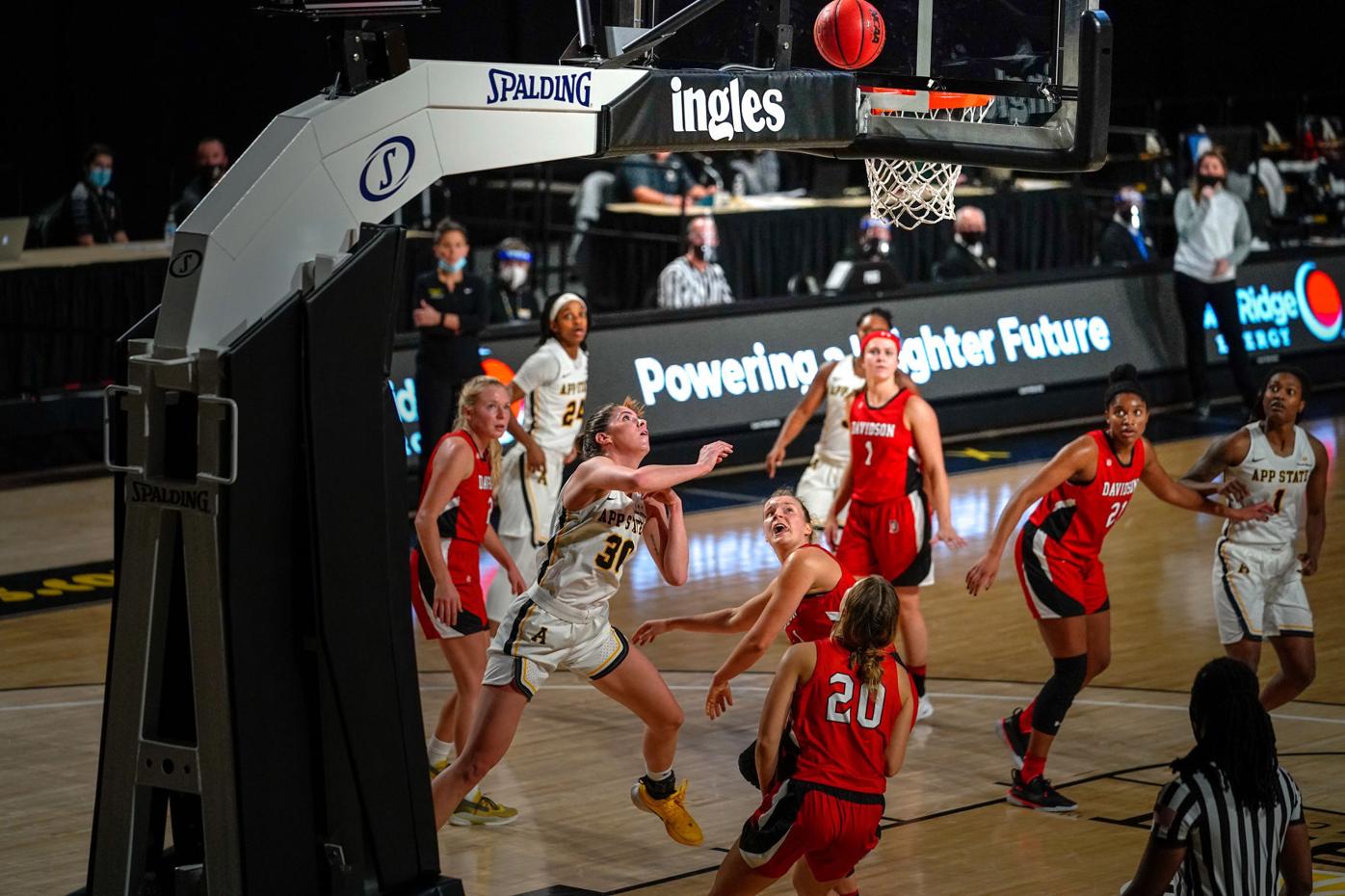 Lainey Gosnell (30) watches her shot fall against Davidson on Dec. 11.

BOONE — Coming home after their first loss of the season, the Appalachian State Mountaineers women’s basketball team suffered their second loss in a row in a 67-64 nailbiter to the Davidson Wildcats on Friday, Dec. 11.

The Mountaineers (2-2) went into the game after losing on the road to the Virginia Tech Hokies a week earlier, while the Wildcats (2-3) were coming off their first win of the season.

It took one minute of play before Pre Stanley opened the scoring, however, neither team could build up enough early momentum for a solid lead. The points were Stanley’s only two in the first quarter, but she still wracked up a season-high and team-leading 26 by the end of the night.

A Lainey Gosnell putback gave the Mountaineers an 8-7 lead with just over six minutes left in the first quarter and began an eight-to-three run over the next three minutes. Only a few minutes later, Gosnell hit a three with one minute left in the first to cap the run with a seven-point lead.

Meanwhile, the Wildcats’ offense stalled for the second half of the quarter, as the Mountaineers carried the 17-10 lead into the second quarter.

While the Mountaineers opened the scoring in the second, the Wildcats were the ones to find their shot. In less than four minutes, the Wildcats reeled App back in, having an 8-3 run of their own to make the score 20-18.

A three from Cameron Tabor cut the Mountaineers’ lead to two, only for Janay Sanders to get it back up to five with an and-one. Sanders’ response set the tone for the rest of the half, as the two teams went back-and-forth. The Mountaineers kept their lead, albeit a smaller one, as the half closed with a 29-25 scoreline.

As the third quarter started, the Wildcats opened with a pair of missed threes. Neither team found their form from outside the arc in the first half, with the Mountaineers going 2-9 and Davidson hitting 3-10. The Mountaineers finished the game going 3-15 from outside, with Head Coach Angel Elderkin noting a lot of their threes were uncontested, and “should have” been made.

As the team battled, the Wildcats kept it close enough to potentially grab a lead. Katie Turner was the one to do it with just under three minutes left in the third by hitting a big three to make it 38-37 for Davidson, their first lead since the fourth minute of the game. The Mountaineers failed to convert any chances they had to get the lead back as Davidson held onto a 42-39 scoreline heading into the fourth.

Davidson’s effort was buoyed by Chloe Welch, who led the game with 32 points after only scoring five in the first half. Elderkin described Welch’s matchup with Stanley as “Batman vs. Batman.”

Just over a minute into the fourth, Stanley tied it up at 45, but the Mountaineers didn’t take back a lead until Faith Alston converted an and-one for a 49-47 lead.

“(Alston) brings a tremendous energy,” Elderkin said, pointing to Alston’s leadership. “We’re going to see more and more of her.”

Appalachian hung on as Stanley continued to convert on the inside while Welch did her best to steal a win. The Mountaineers lead 57-55 with five minutes left in the game.

Welch continued to play the hero for the Wildcats, repeatedly hitting shots to tie the game before being fouled by Tierra Wilson. Welch’s 29th and 30th points were the ensuing free throws for the lead. Down 65-62, Stanley scored an easy layup with 13 seconds left before Turner was sent to the line with an intentional foul who sealed the deal by sinking both free throws for the 67-64 win.

After the game, Stanley pointed to the team’s defense as the major flaw in the game.

“Defensively, we didn’t do our part,” Stanley said. “When you have a team that continues to come at you, you have to play your part.”

The Mountaineers’ next game was scheduled to be a home matchup with the North Carolina Central Eagles (1-2) on Monday, Dec. 14, however it was canceled Dec. 11 due to COVID-19 concerns with the NCCU program, according to App State Athletics.

Instead, the Mountaineers will wait until Sunday, Dec. 20, for a road contest with the East Tennessee State Buccaneers (1-2).