App State baseball alums featured Ryan Smoot on the mound to start the July 4 exhibition match with the Boone Bigfoots at Smith Stadium’s Beaver Field on the campus of Appalachian State University. 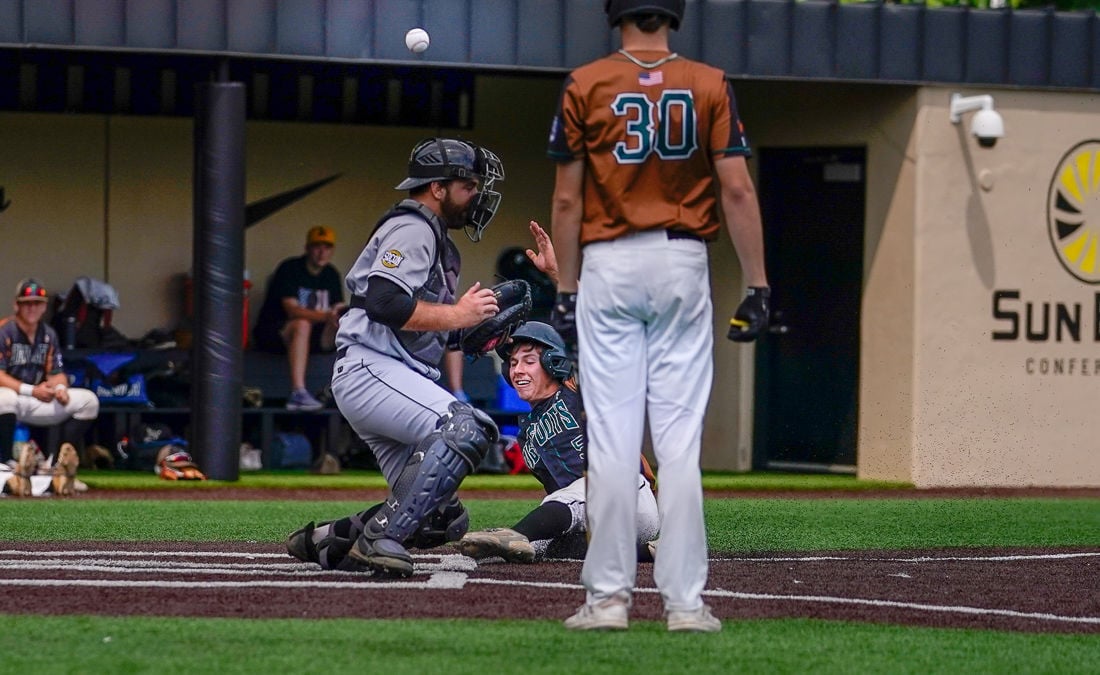 As the Boone Bigfoots’ Logan West slides into home plate for an early run, a wild throw gets away from the App State alums catcher Bradley Davis. On July 4, the exhibition ended in a 6-6 tie after eight innings. 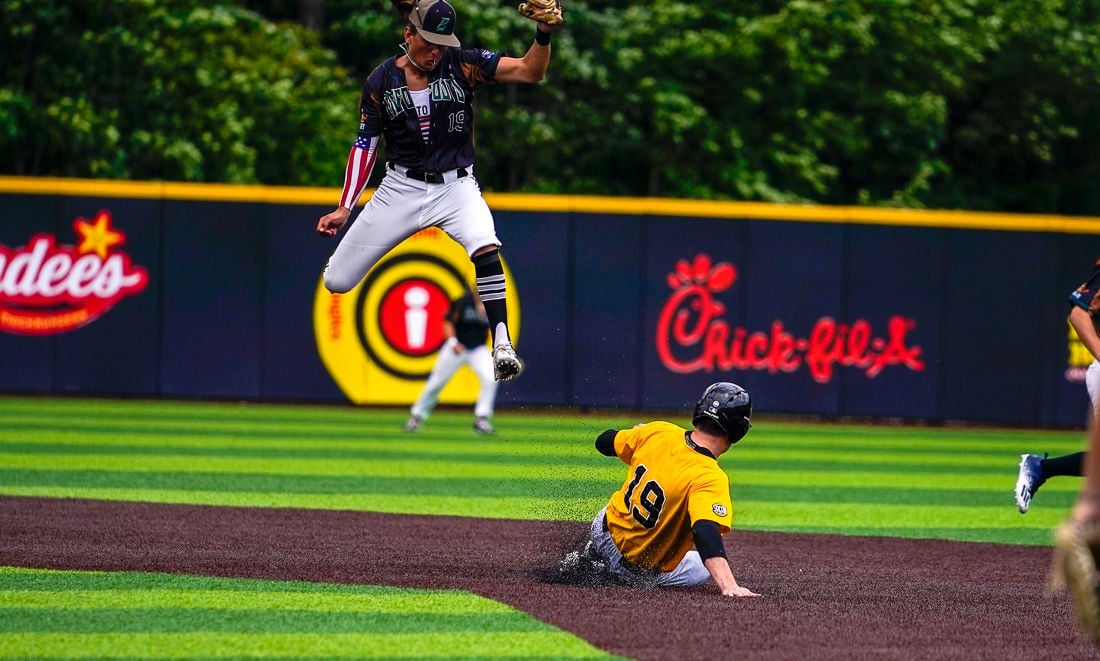 App State alum’s Will Herman (19) slides in to second safely as the Boone Bigfoots’ second baseman Hayes Henderson (19) makes an acrobatic catch and attempted tag in the first inning of the Bigfoots’ exhibition matchup against Mountaineer baseball alumni. The 8-inning game ended in a 6-6 tie, played July 4 at Smith Stadium and Beaver Field. 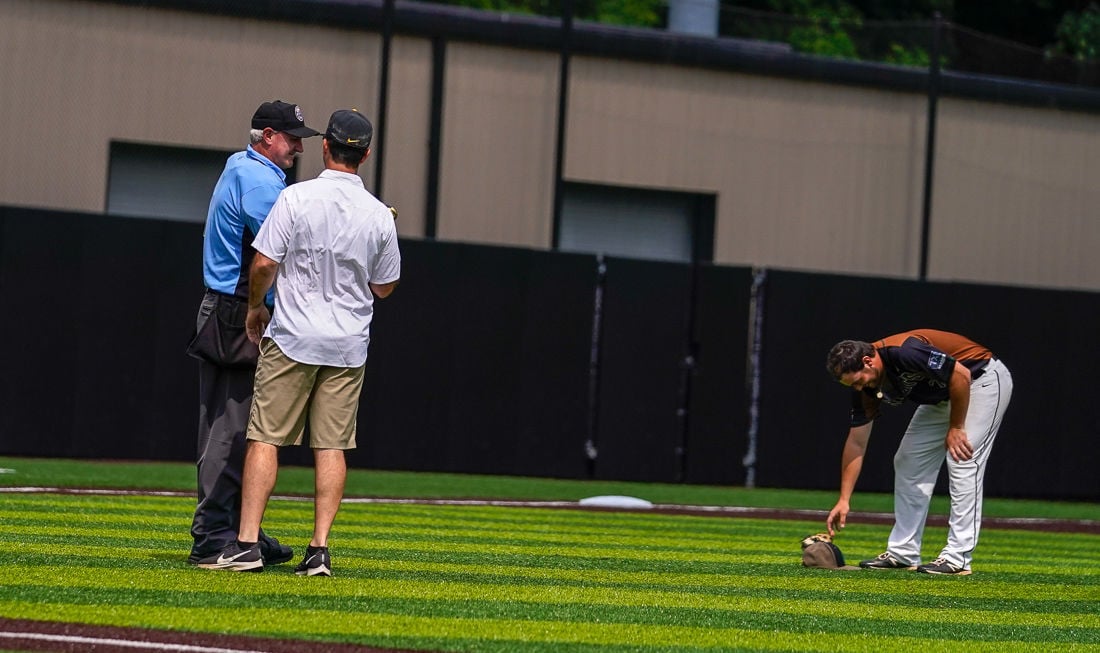 Mountaineer head coach Kermit Smith (white shirt) asks the umpire to check Bigfoots’ starting pitcher Matthew Dooley’s mitt for a ‘foreign substance’ during the July 4 exhibition between the summer Textile League team and the App State baseball alums, in front of an estimated crowd of 750. 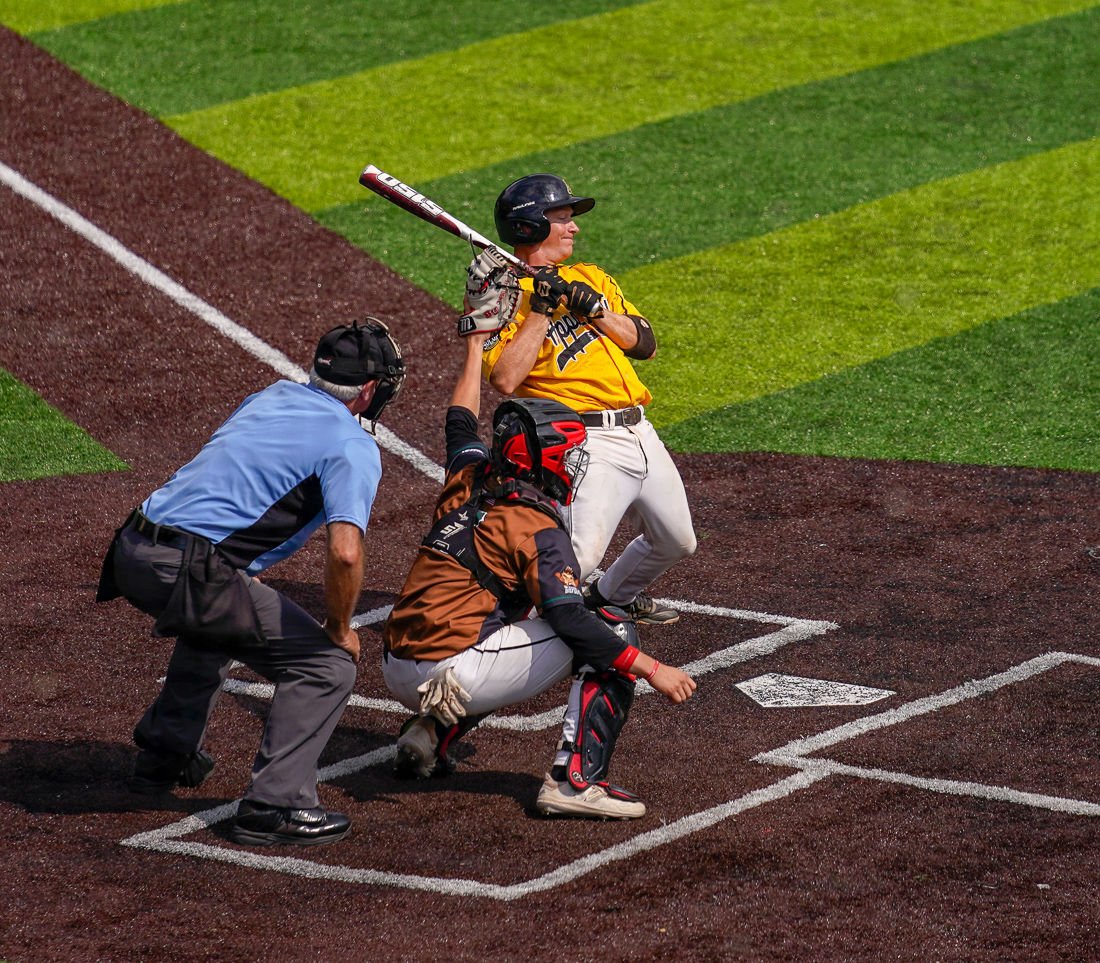 The Boone Bigfoots pitcher apparently didn’t like the way this App State baseball alum was crowding the plate during the July 4 exhibition. 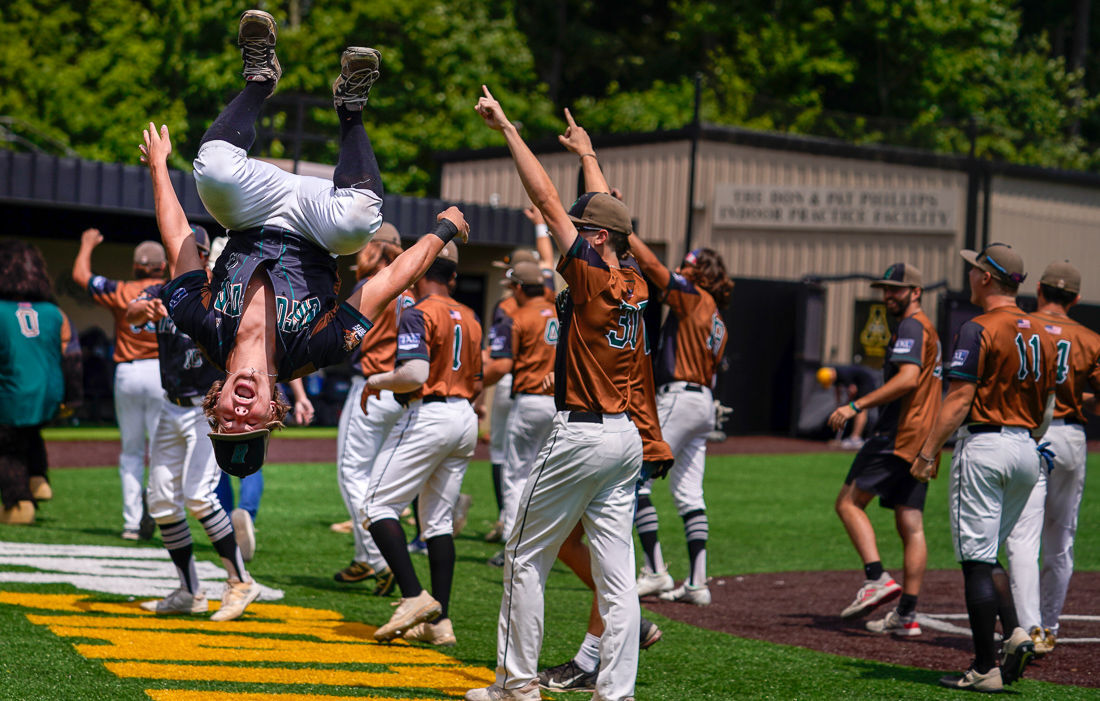 The Boone Bigfoots’ David Julian puts an exclamation point on the team’s pre-game line dance with a head-over-heels flip on July 4, before an exhibition game against App State baseball alumni.

An App State baseball alumni player smashes a ball down the left field line during the alums exhibition matchup with the Boone Bigfoots, July 4, at Smith Stadium and Beaver Field.

BOONE — It was a baseball game with just about everything: a couple of doubles, a triple or two, an inside-the-park home run, stolen bases, wild pitches, batters hit by a pitch, brushbacks, and an unorthodox double play. It even had line dancing, back flips, karaoke and the crowd participating in the wave.

The Boone Bigfoots were just returning from a stretch that saw them play five of the last seven games on the road. For the July 4 game in Boone, an estimated crowd of 750 packed the grandstands at Smith Stadium and lined the fence along the first base line to watch the Bigfoots in an exhibition against baseball alums from Appalachian State University.

After the entire Bigfoots roster organized themselves behind home plate for some pre-game boot-scootin’ with a line dance, the alums — designated as the visiting team — got off to a rollicking start in the top half of the first inning when shortstop and leadoff hitter Will Herman laced the first pitch of the game into right centerfield. Even though he stole second and managed to make it to third, he was stranded as Bigfoot starting pitcher Matthew Dooley found his way out of the inning.

In the bottom of the first inning, the alums’ starting pitcher, Ryan Smoot, looked a little rusty in walking the first two batters, allowing a double steal, then hitting the third batter he faced with a pitch to load the bases. After the Bigfoots scored three runs in the first inning, one spectator was overheard saying, “Oh, this could get ugly.”

But the alums pulled themselves together and played inspired defense after catcher Bradley Davis pegged a throw to third, nailing the Bigfoots’ Chase Campbell trying to steal. Then the alums scored a run of their own in the top of the second and three more in the third to take a 4-3 lead.

The Mountaineer alums’ rally was jumpstarted when head coach Kermit Smith challenged the home plate umpire to check Dooley’s mitt for a “foreign substance.” After Smith retrieved some sort of testing device from his dugout to aid in the investigation, the umpire waved his arm toward first, awarding alum Andrew Papp the base even though he had just struck out.

“I grew suspicious of what he might have in his mitt after some of his pitches seemed to break more sharply than usual. All I can say is that he is lucky he didn’t get thrown out of the game,” Smith deadpanned, with a smile.

The alums blanked the Bigfoots in innings two, three and four, then added two more runs of their own in the top of the fifth. A highlight was Papp’s inside-the-park home run after he hit a sharp ground ball through the infield, then past the outfielders who had been pulled into shallow outfield positions, showing no respect at all for the alum — who is also the Bigfoot club’s general manager as well as being a former Mountaineer. The ball rolled all the way to the fence in right centerfield and somehow Papp survived his sprint around the bases. Medics were standing by, if necessary, as he crossed home plate.

To see some of the Bigfoot players shunning traditional ball caps in favor of cowboy hats while out in the field was representative of the mindset of having fun on this day. A lowlight occurred in the middle of the fifth inning when Boone native Hayes Henderson, the Bigfoots’ second baseman, ground out a not so stirring rendition of a country western song, karaoke style, but he got hearty applause from the crowd for the effort nonetheless.

The Bigfoots scored one run in each of the fifth, sixth and seventh innings to tie the game at 6-6, but what was billed as a seven-inning exhibition could have been over in the seventh frame after the home side tied the game and still had runners on first and second with just one out. That runner in scoring position on second represented the potential winning run and it loomed large.

But then the miraculous happened for the Mountaineer alums. The next batter for the Bigfoots, Logan Leax, knocked a three-hopping ground ball toward third. Alum third baseman Jamie Sheek took three steps forward to field the ball cleanly, then alertly whirled around to tag the Bigfoot runner, Walter Munday, trying to advance from second to third. With the tag made and the first out recorded, Sheek hurried a throw to first, the ball sailing wide left of the base. But first baseman Connor Leonard lunged to field the ball and spun around to tag Leax out before he reached first to complete the unorthodox double play that ended the scoring threat and the inning.

Smith was all smiles after the game.

“Yeah, that double play in the seventh wasn’t anything that I ever drew up,” he said, laughing. “What made it special, though, is that the play was made by two guys that I coached.”

Smith had some enthusiastic praise for the Bigfoots.

“These guys are a lot of fun and what they are doing for the community is also good for promoting baseball in the High Country,” said Smith.

The Bigfoots, a member of the new Textile League with teams in North Carolina and Virginia, get back into serious play on Thursday, July 8, with a 6 p.m. contest at Smith Field against the Statesville Owls. They stay at home on Friday, July 9, to face the Disco Turkeys, before a special “Cobra Kai Night” promotion on July 10 when they face the CV Stars. Modeled after the TV show, Cobra Kai, the event promises to be a lot of fun for spectators young and old. The Bigfoots’ owner, Robert Wilson, is the producer of the Cobra Kai television show, which is filmed on location in Atlanta.