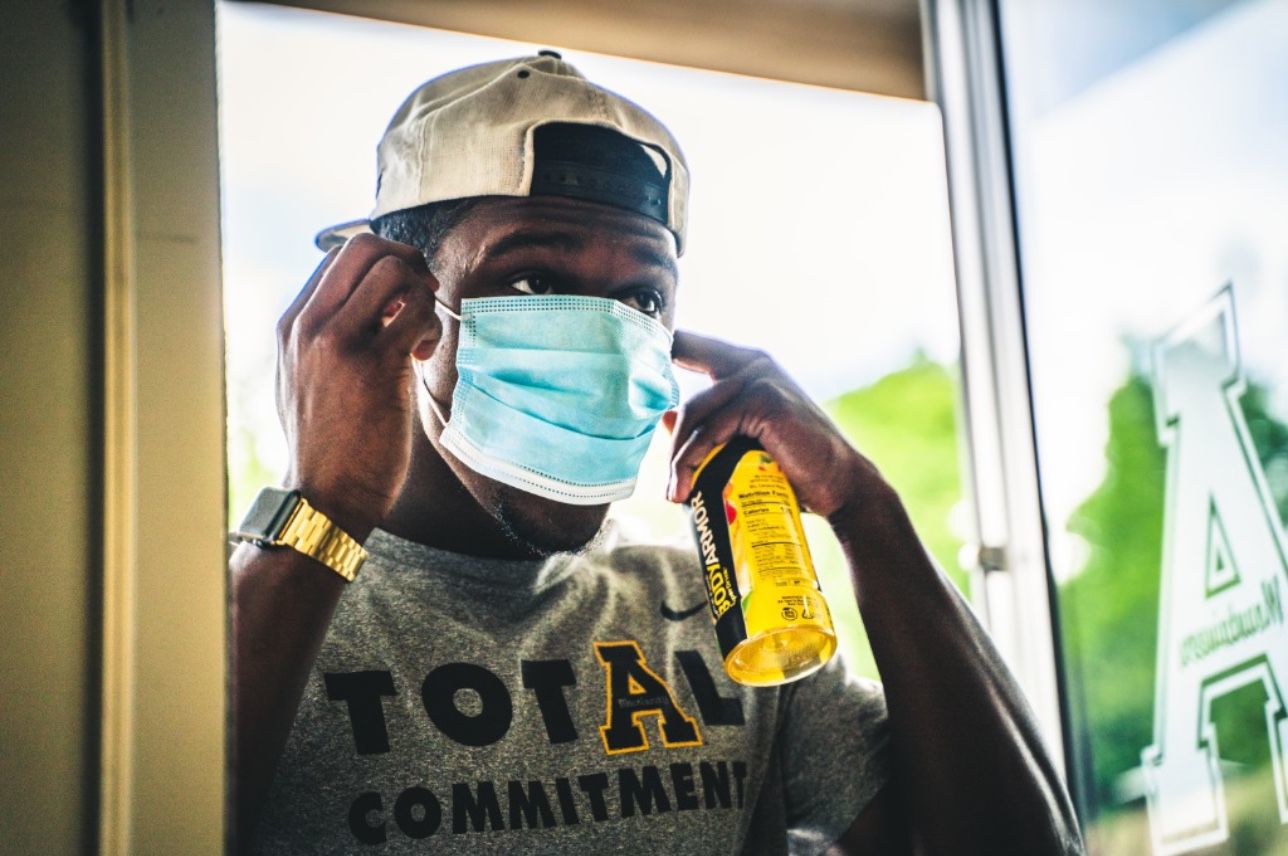 Brendan Harrington returns to campus on June 15 for voluntary workouts. 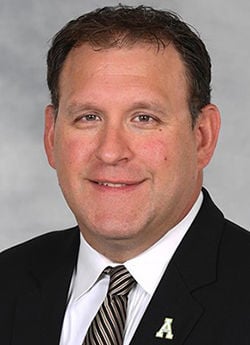 BOONE — App State head coach Shawn Clark said the phased return of football players to campus would be complete as of Friday, July 10, with 90 players back in Boone for summer workouts.

The team has followed a set of protocols developed by the university’s Athletics Office and emergency management leaders for the return of the athletes to campus — which began June 15 — including daily screenings and temperature checks as well as COVID-19 testing upon arrival, which Clark said has resulted in “a couple positives.”

“We’ve had a couple positives, but we were on those very quick,” Clark said, speaking to reporters on July 9. Clark said the players were quarantined.

“We were very thoughtful of how we were going to do this. We brought guys in waves, we brought guys in groups of 22 every time, to get to our total number of 90,” Clark said. “We were following university protocol for testing, if someone tests positive, we have a protocol in place to quarantine our players, but right now, knock on wood, we’ve been very lucky.”

Clark said that players are working out in small groups, or “bubbles.” In the weight room, that consists of nine players and one coach. If a player tests positive, under university protocol, the player’s workout group would be quarantined, he said.

On July 8, Ohio State announced it would pause all voluntary workouts for seven athletic teams, including football, as a result of its most recent COVID-19 testing. The same day, UNC-Chapel Hill announced that 37 of 429 student-athletes, coaches and staff who have been tested since June 1 have tested positive, and that this week, the Orange County Health Department had identified a cluster, which is five or more related cases. As a precaution, UNC-Chapel Hill said its football team would pause workouts for at least a week.

Following Clark’s call with reporters, the Watauga Democrat sought clarification on whether the cases mentioned by Clark were among football players or student-athletes in general.

“We work closely with AppHealthCare to keep our student-athletes as safe and healthy as we possibly can,” Athletics spokesperson Joey Jones responded. “Under their advice, we are not releasing any further identifying information about any students who have tested positive for COVID-19, and moving forward we will not identify their student-athlete status.”

On its coronavirus website, Appalachian State is reporting the numbers of cases among students, employees and subcontractors, regardless of where the cases are located, if they can be confirmed with public health officials. As of July 10, 21 students have been confirmed to have tested positive, with 10 cases still active.

In Watauga County, 136 cases have been confirmed in county residents. Of those, 45 percent of cases have been among 18- to 24-year-olds, according to the N.C. Department of Health and Human Services.

Clark said it was his staff’s jobs as coaches and leaders to remind their players about following the COVID-19 health guidelines.

“I think it’s very important,” Clark said, referring to players’ health behaviors and responsibilities off the field. “We try to do our jobs as coaches and mentors and educate our players. We’re following national guidelines. We explain to those guys, if you want a football season, you need to wear a mask, we need to stop the spread. But again, you’re dealing with 18- to 24-year-old kids. We can talk until we’re blue in the face sometimes, but it’s our jobs as coaches and leaders to make sure we’re on the forefront, to make sure we’re doing everything possible to make sure the season goes on.”

Clark said he expects the new field turf installation at Kidd Brewer Stadium to be complete by July 31, about six days before the team’s fall camp begins on Aug. 6.

He said App State’s program is in constant contact with Sun Belt leaders and even Power 5 conferences, but there are still many unknowns about the fall season. Clark believes it will be determined state by state.

“Right now we’re just trying to do our part, make sure we slow the spread down, wearing a mask, and follow the protocol,” he added.

Later in the day following Clark’s call with media, it was announced that App State’s Sept. 19 game at Wisconsin would be canceled due to the Big Ten Conference’s decision to play conference games only for fall sports.

with test results still taking 10-14 days, who is doing the contact tracing on the positive test results?

Not the University! They've already made that *abundantly* clear. That will all be left up to the county. If Boone and Watauga County citizens truly realized what the University has been up to in their (complete lack of a) plan to bring back students, and to leave it entirely up to the Health Department to sort out issues when they arise, they'd be marching on Sheri's office with pitchforks.

Football exploits black students because they get little pay while a ton of money goes to excessively paid coaches and athletic directors. Coach is paid 100x the players. AD is paid 50x the players. Chancellor makes 40x the players. Provost makes 30x the players. No wonder they are pushing the players to play during a pandemic.

Black lives matter but not as much as their incomes.

Too much money in sports. They are not about to let COVID-19 interfere. Now the battle begins. They will begin to eat their own.

Unlike other universities, they are not being transparent with the positive tests of athletics. Clemson and other programs had 40+ football players test positive, and that will happen here, but we will not know. The university is the worst neighbor ever. They don't care about the town or the residents. Before Sheri, the university was a good partner that actively accounted for town concerns. Sheri? Doesn't care about anything but her next bonus, her next party, her next $100k golf cart and her next bulletproof office. The students, faculty or town....they're just in the way.