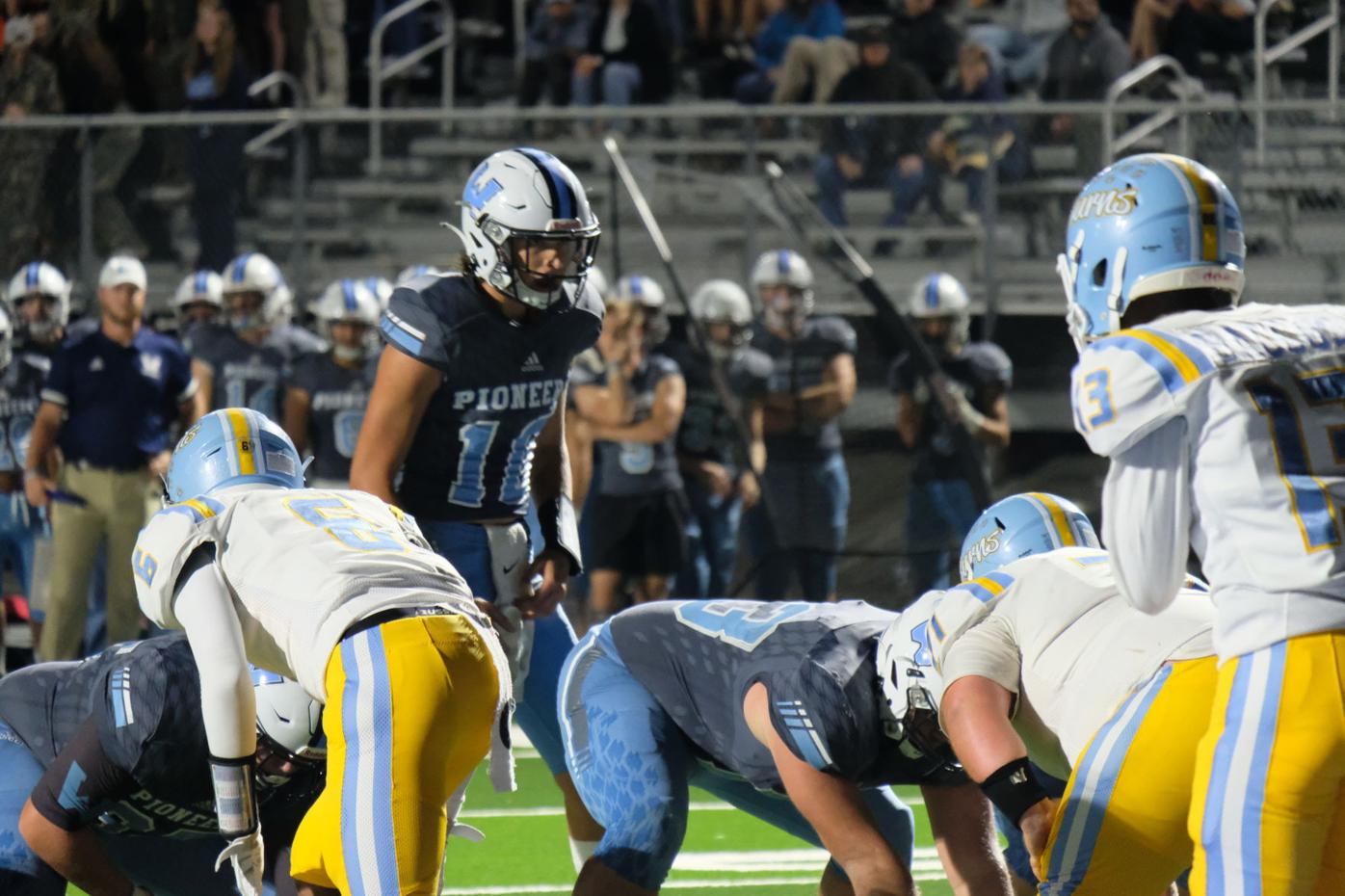 Watauga QB Wyatt Keller was pulled from the game against Burns while down 14-0, but came back to help the Pioneers in a comeback for the ages in the 28-20 win. 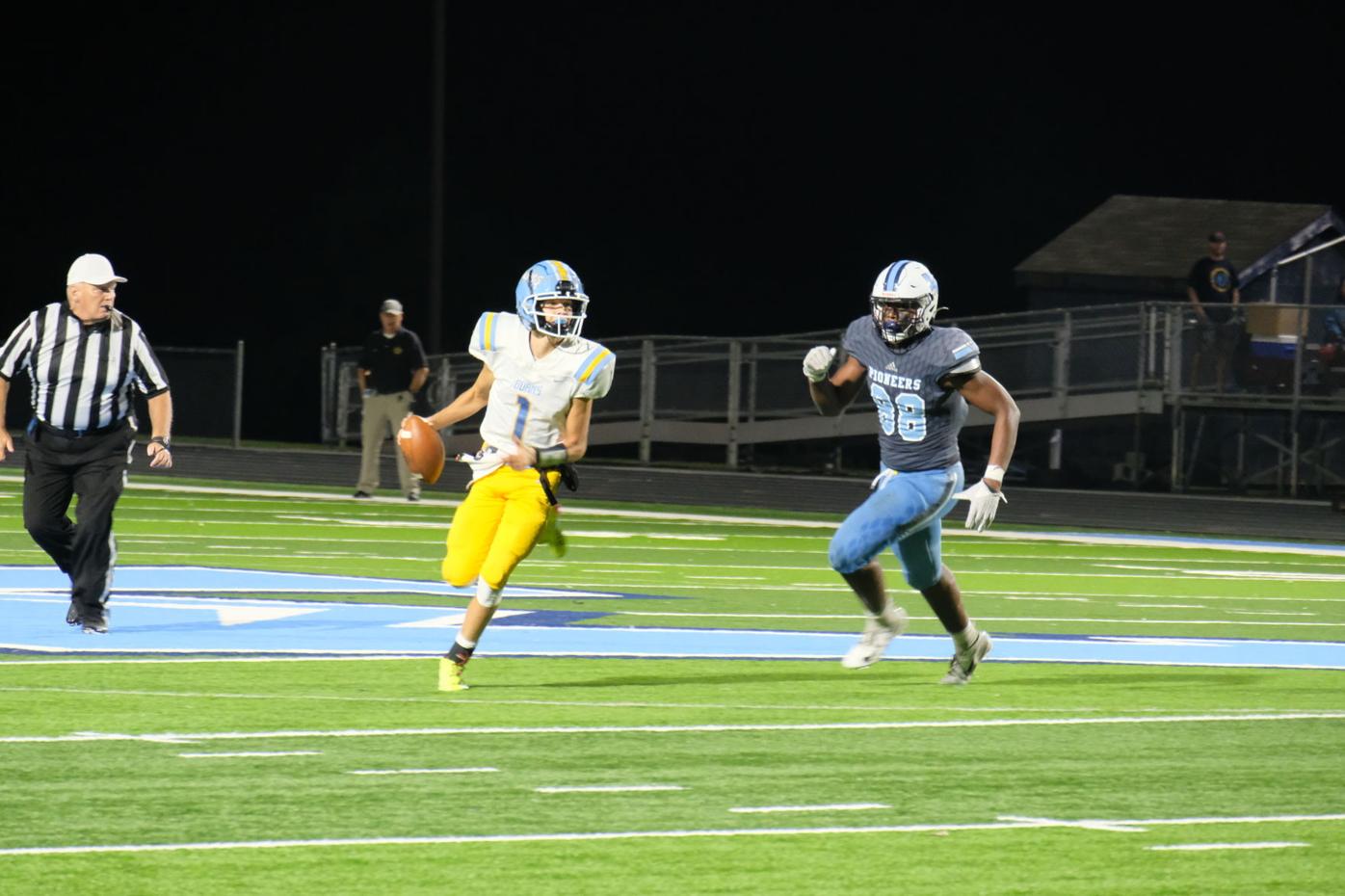 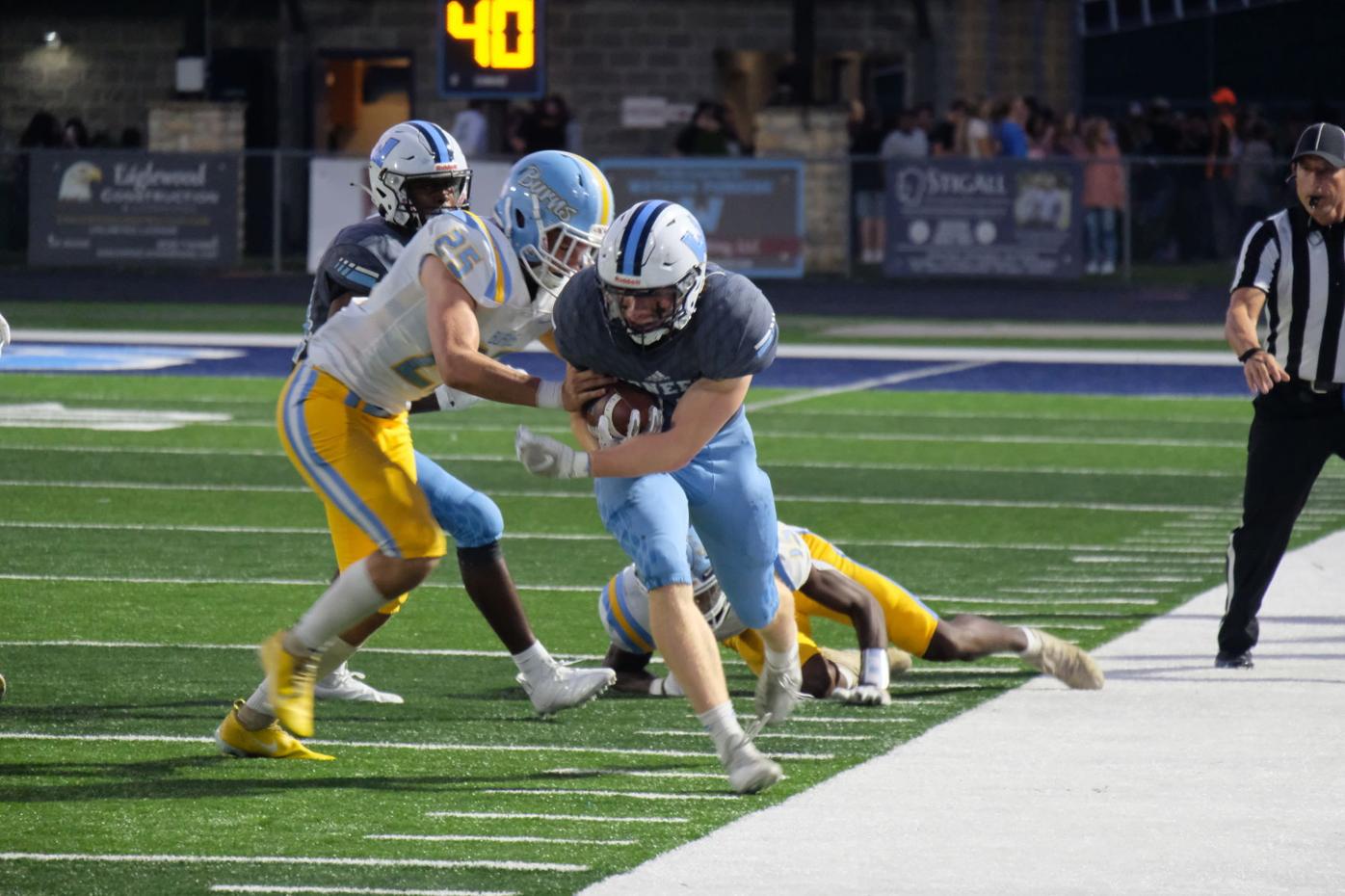 Orlando Leon gets some tough yardage for the Pioneers in their 28-20 win over Burns on Sept. 10. 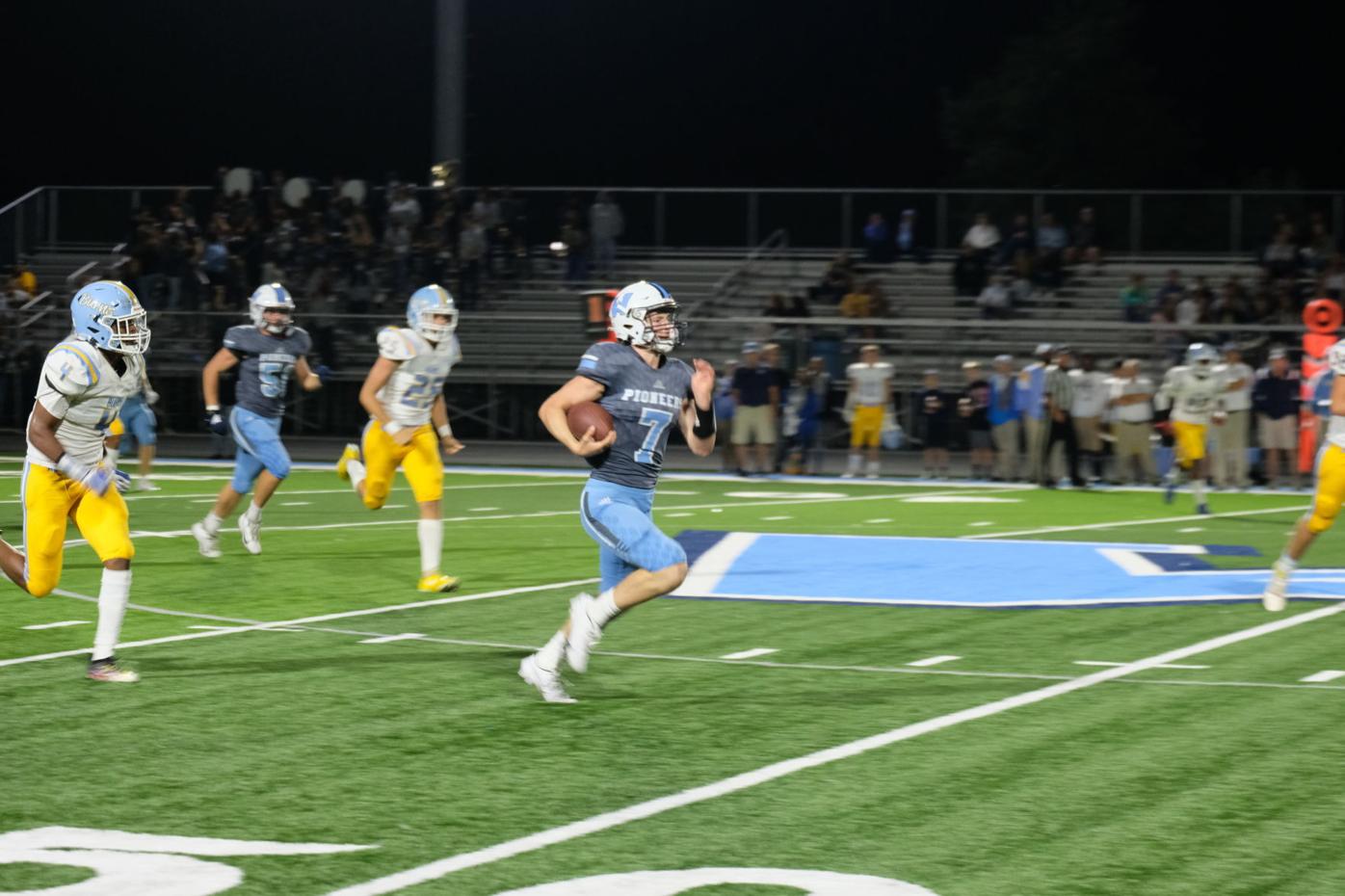 Watauga QB Carlton Horrine did not spend the whole game against Burns under center, but found the time to break free for a big run in the 28-20 win. 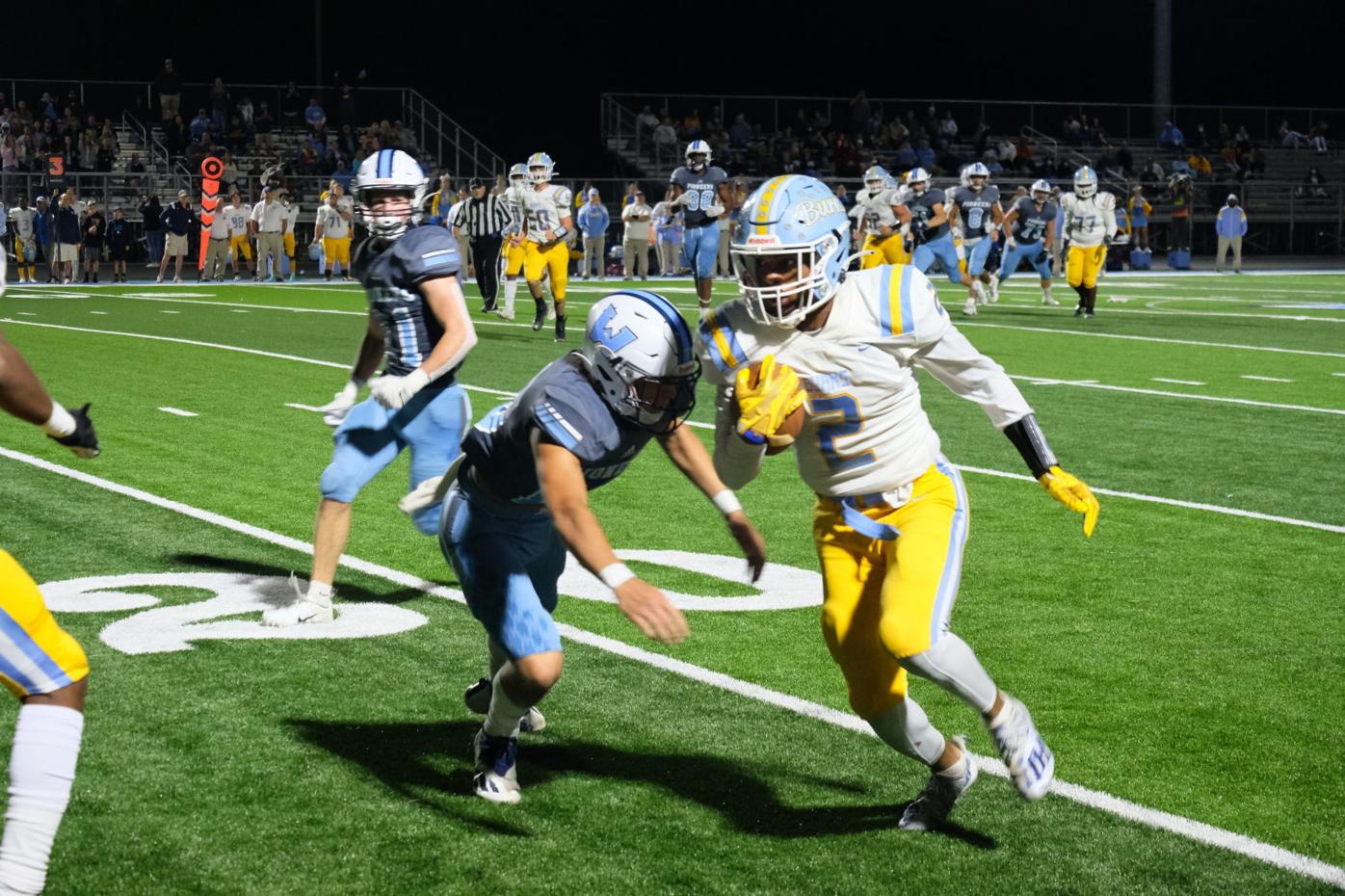 Burns receiver Ryan Thompson (2) was a problem all game for Watauga, but his 154 receiving yards were not enough for a Bulldogs win. 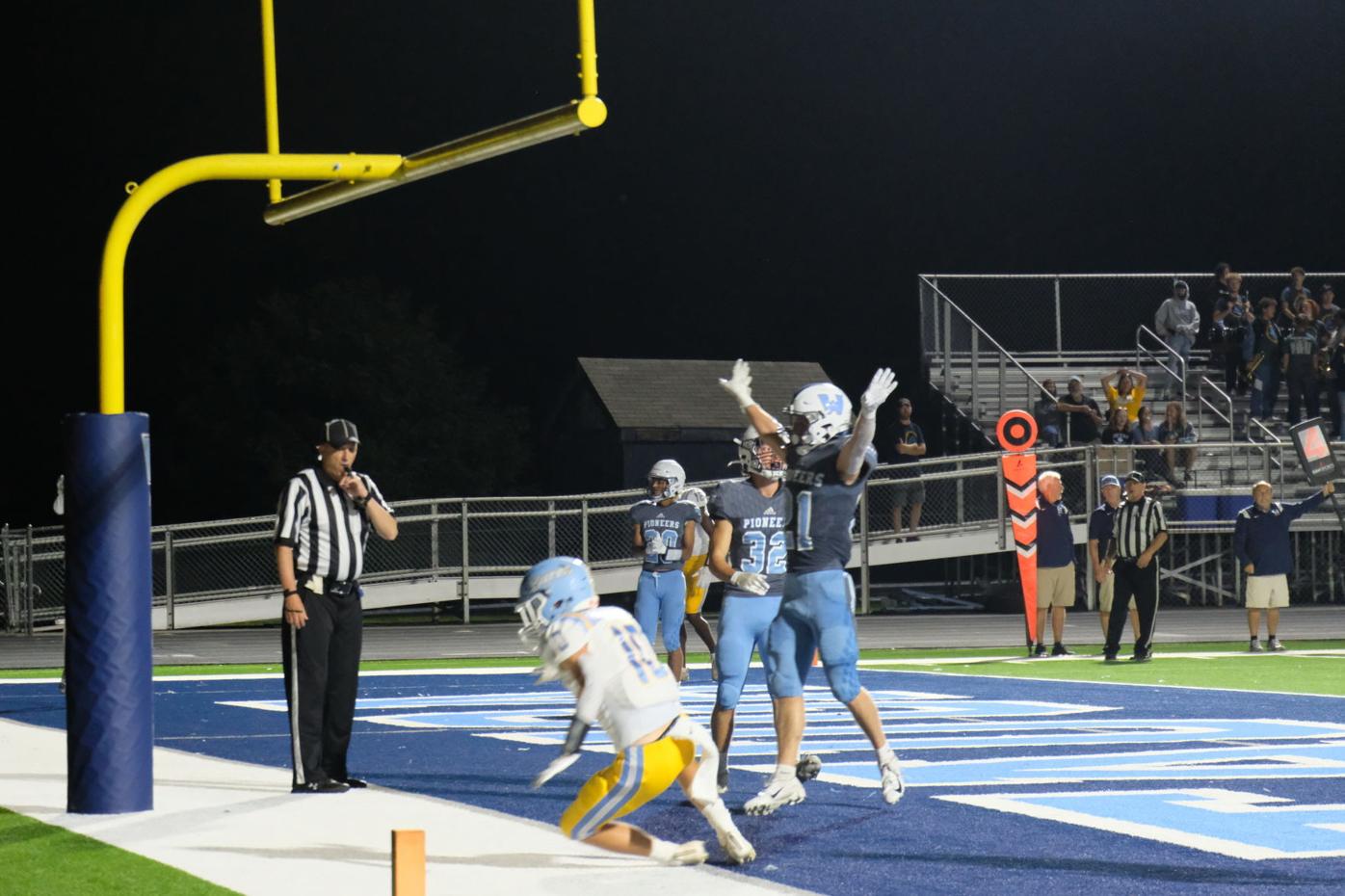 Watauga QB Wyatt Keller was pulled from the game against Burns while down 14-0, but came back to help the Pioneers in a comeback for the ages in the 28-20 win.

Orlando Leon gets some tough yardage for the Pioneers in their 28-20 win over Burns on Sept. 10.

Watauga QB Carlton Horrine did not spend the whole game against Burns under center, but found the time to break free for a big run in the 28-20 win.

BOONE — Going down by 14 to any team is never good, let alone a team like Burns, but that didn't stop the Watauga Pioneers football team from pulling off the comeback in a 28-20 win.

Pioneers head coach Ryan Habich previously noted Burns was a state championship contender for a reason, and said after the game that they expected a hard-fought affair. Early on, the Pioneers seemed up to the challenge as they pieced together play after play.

In the first quarter, what had the makings of a good, tough drive quickly changed when a holding call sucked the life out of the Pioneers. An offense that was running the ball well and controlling possession stalled out, but Burns was not satisfied with just a stop.

Facing a third-and-10, Watauga quarterback Wyatt Keller fumbled under pressure from the Bulldogs. Burns' Cahari Haynes — ever the opportunist — scooped up the fumble and took it all the way back for a the score.

After the extra point, Watauga was down 7-0 and needed to get their groove back.

Tasked with piloting the Pioneers back to the promised land was Carlton Horine. Planned to be the starting quarterback before the season, Horine made his return to the field after missing the first three games due to a knee injury.

Habich said after the game that the coaching staff planned on easing Horine back into the fold, and was impressed with how comfortable he looked on the field.

Even with Horine coming in, the spark still wasn't there for Watauga, as their offense lacked the tooth needed to get through the Bulldogs.

Burns' offense on the other hand kept banking on QB Ben Mauney and offensive weapon Ryan Thompson. The dynamic duo gave the Watauga defense fits all game, and connected for a 26-yard touchdown in the waning moments of the first quarter to put Burns up 14-0. Thompson finished the game with 12 receptions for 154 yards and a score as he continually made plays with the ball in his hands.

Down 14-0, the Pioneers never stopped fighting for yardage while their defense began to put the clamps on the Bulldogs. With Horine orchestrating an option scheme, surrounded by talented backs, Watauga put the pedal to the metal as they bulldozed their way through a Burns defense that was letting up.

With just under five minutes left in the half, Watauga made it all the way down to the one-yard line. Backup QB and linebacker Levi Temple got the call and powered his way into the endzone to get rid of the goose egg on the scoreboard.

Now down 14-6, it was a one possession game and Burns was looking to extend their lead before halftime. Driving into the redzone, the Pioneers defense made their statement, holding the Bulldogs out of the endzone to keep spirits up at the half.

“That was huge, it's the middle eight — last four minutes before the half and the first four of the third quarter — and we really wanted to win the middle eight right there,” Habich said. “I thought that stop gave our kids confidence and momentum.”

From one highlight to another, the Pioneers’ defense changed the game in the opening seconds of the third quarter.

A failed onside kick set up the Bulldogs with excellent field position, but they were not the ones who took advantage of it. On only the second play, Mauney threw a ball that was tipped by linebacker Orlando Leon and fell into the grasp of freshman corner Maddox Greene.

Greene — a junior varsity quarterback who did not even have a “W” on his helmet — raced down the sideline and into the endzone for a 54-yard pick six. After a two-point conversion, the Pioneers had tied it at 14-14 in dramatic fashion.

Burns was broken, with their offense looking like a shell of itself on their next drive, which gave Watauga good field position to try and take the lead.

The Pioneers were back to having Keller under center, who picked up where Horine left off as they drove down the field with little resistance. According to Habich, Horine picked up a hand injury while playing defense, but they were confident in Keller’s abilities.

After leading a drive down to the two-yard line, Keller handed the ball to Will Curtis and the bruising fullback barreled his way in. With a PAT, the Pioneers had scored 21 unanswered points and were not looking back.

With their backs against the wall, Burns’ offense woke up but again fell victim to the Pioneers’ defensive might. The Bulldogs were clinical, driving down the field with short passing that found whatever gaps were available and a tough style of running. Still, Watauga won the battle with a goal line stand on the one-yard line, desperate to keep their lead.

In the final seconds of the third quarter, Curtis exploded from behind the wall of offensive lineman, scurrying up the field for a 38-yard run as time expired to get the fans on their feet for the final frame.

The Pioneers drive that started from their own one-yard line drove the length of the field before Curtis capped it off with a one-yard scoring run.

With 28 unanswered points, the Pioneers looked to keep the pressure mounting and tried for another onside kick. Like their first attempt though, it ended up in the hands of the Bulldogs, who again were set up in the middle of the field.

But that didn't matter to the Pioneers defense. On the first play of the drive, Mauney was taken down by defensive force Isaiah Shirley, and on the next play he was brought down by Logan Johnson.

Now, backed up to their own 37, the Bulldogs turned it over on downs as the powerhouse program had lost its mojo.

The Bulldogs did manage to avoid a three-quarter shutout in the final minutes when Mauney spent an entire drive getting the ball in the hands of Thompson. With just under two minutes to go, Jeremiah Norris pounded it in from three yards out and suddenly, it was back to being a one possession game.

Down 28-20, Burns put all of their eggs into an onside kick-shaped basket. However, the comeback attempt ended up in Watauga’s hands as the Pioneers pulled off the upset.

“A lot of people didn’t think we’d win this game,” Habich said. “We had a theme this week, ‘respect all of our opponents, but fear no one.’”

With a statement victory under their belt, the Pioneers will have one last game before beginning conference play, and it will be against a rival who is a new face to the Northwestern 3A/4A landscape. Watauga will head to Ashe County on Friday, Sept. 17, to take on the Huskies in the first of a home-and-away series for the neighboring schools.