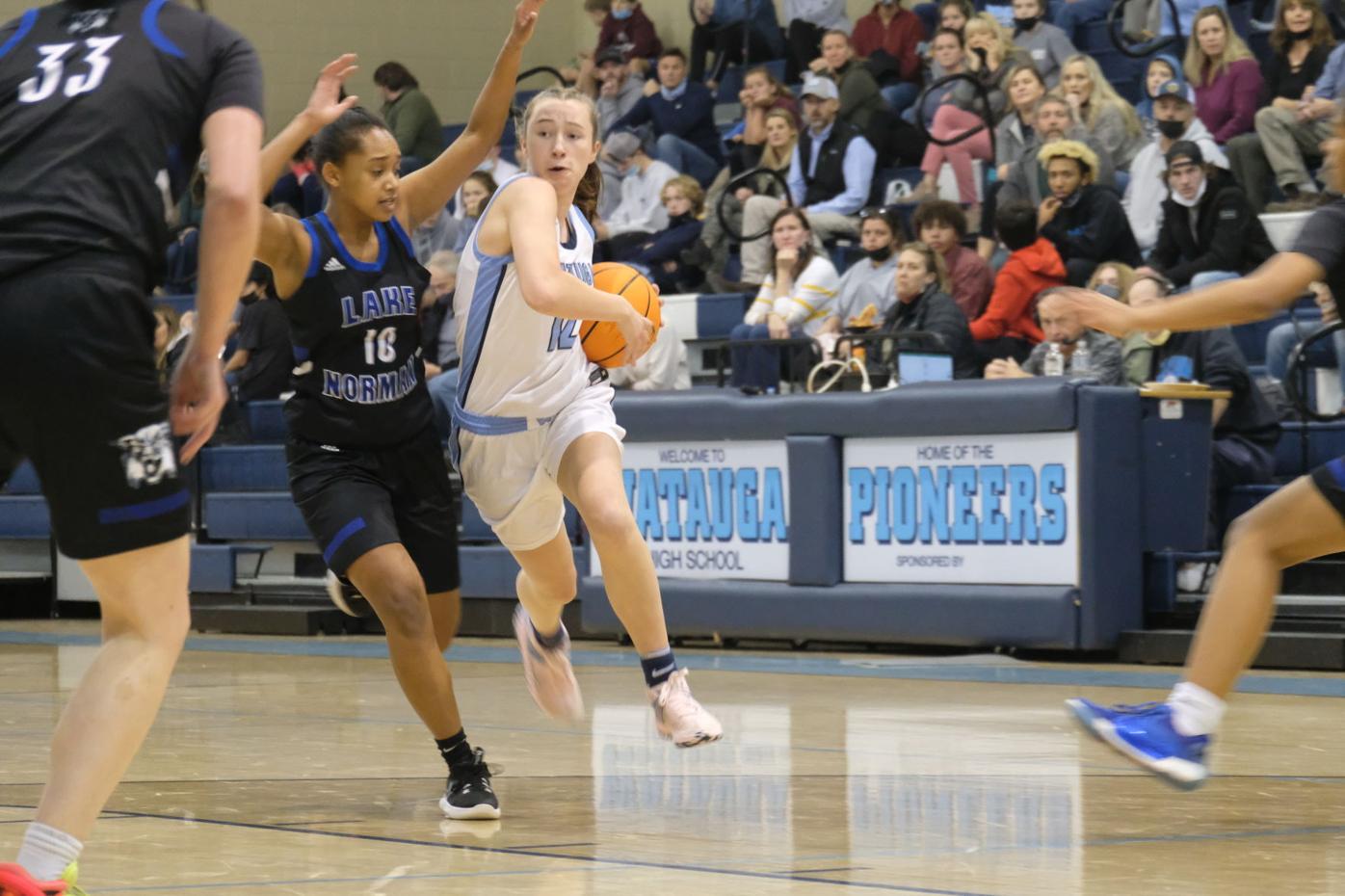 Watauga guard Kate Sears (12) drives inside against Lake Norman on Dec. 1. Sears led the Pioneers in scoring with 13 points in the overtime win. 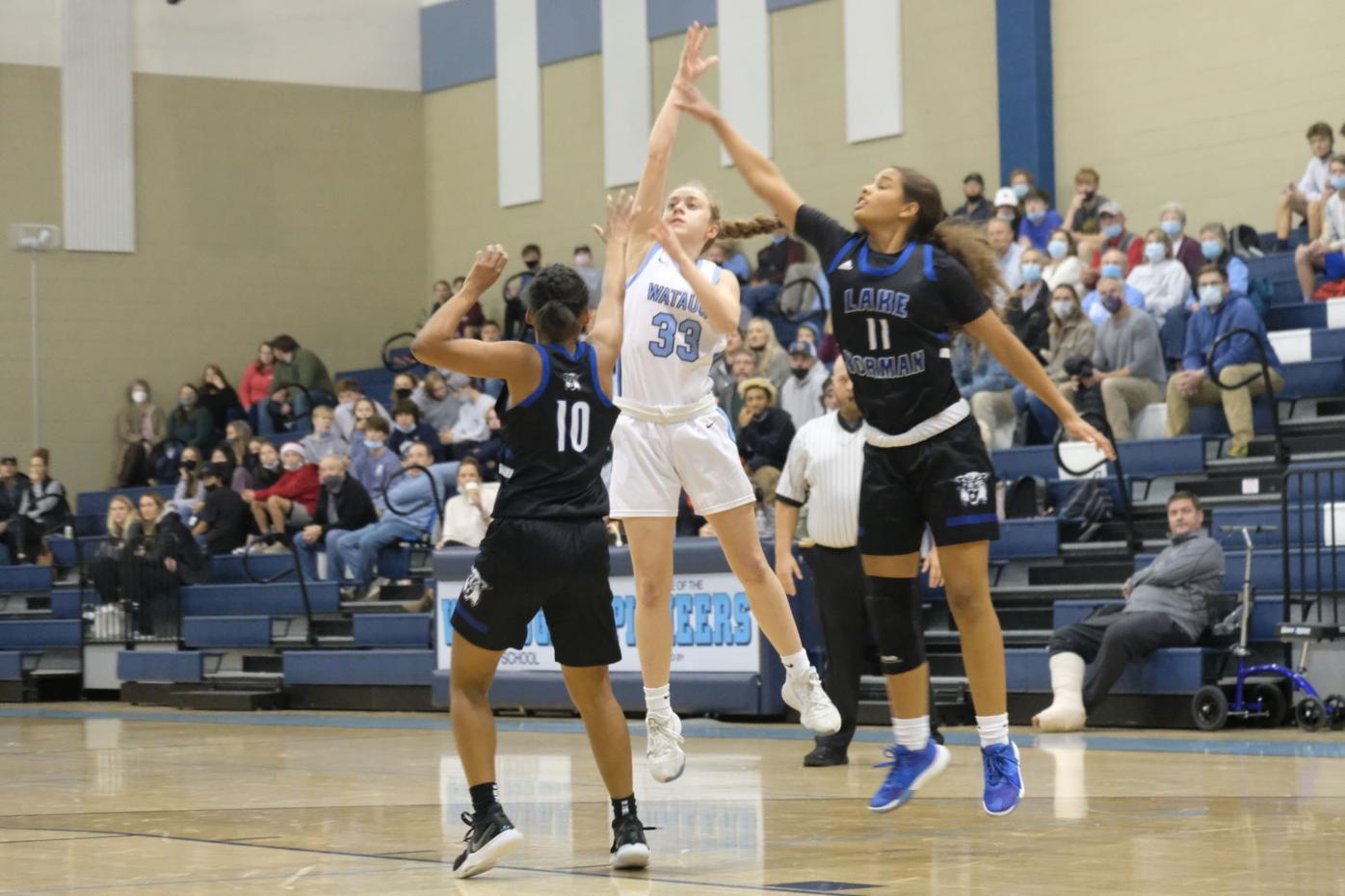 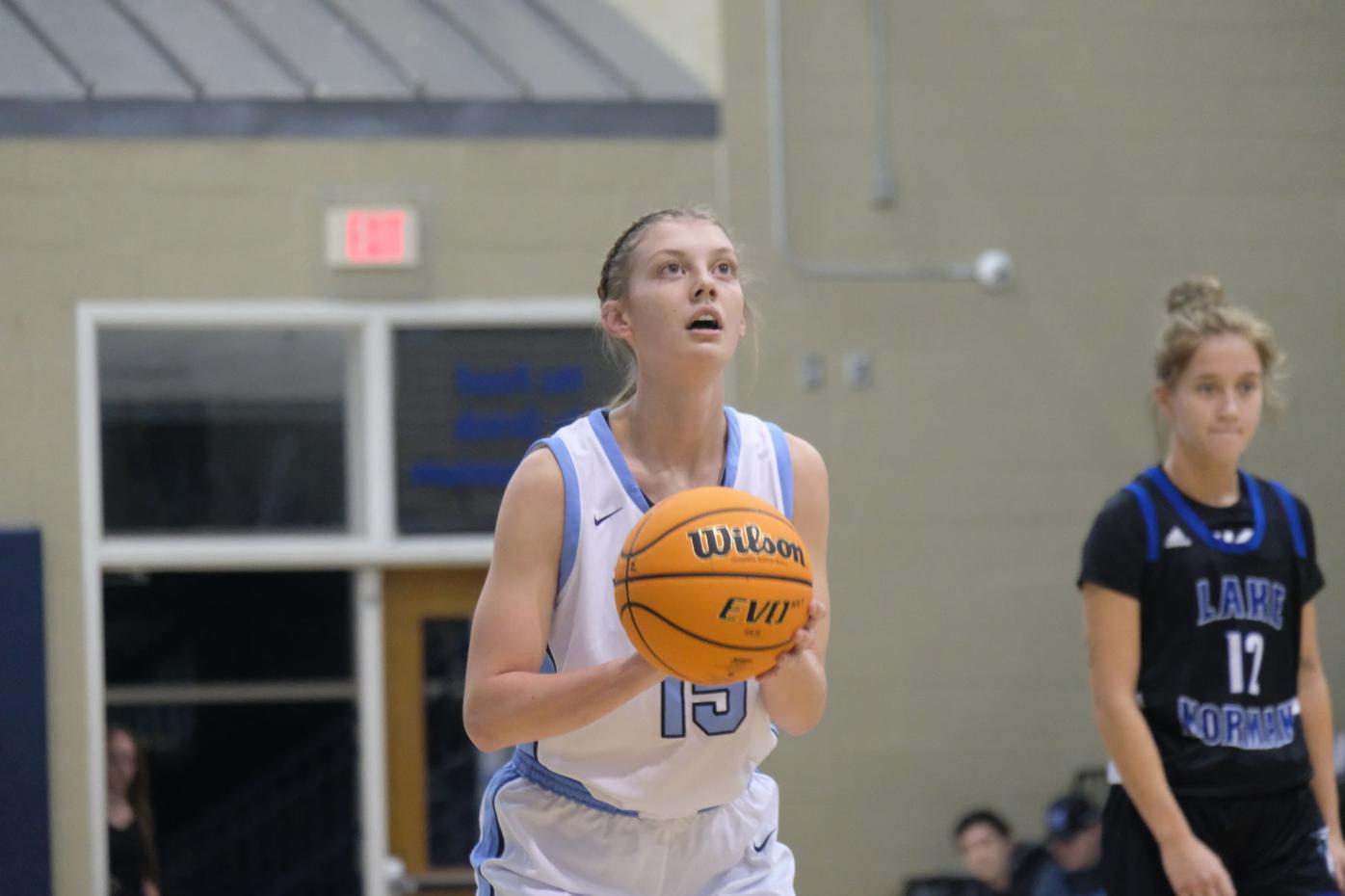 Carolina Farthing (15) lines up a free throw against Lake Norman.

Watauga guard Kate Sears (12) drives inside against Lake Norman on Dec. 1. Sears led the Pioneers in scoring with 13 points in the overtime win.

Carolina Farthing (15) lines up a free throw against Lake Norman.

BOONE — It may have taken some extra minutes, but the Watauga Pioneers girls’ basketball team got their first home win of the year in a 49-46 overtime thriller against Lake Norman to remain undefeated.

The Pioneers (3-0) went into the Wednesday, Dec. 1, matchup on the heels of back-to-back wins by 20 points or more as they try to establish themselves in the young season.

Watauga guard Kate Sears had the honors of scoring the first home points of the season, but the early 2-0 lead would seem like a distant memory only moments later. The Wildcats (2-2) answered with a 10-4 run as senior six-footer Aly Wadkovsky proved to be a hellacious force in the paint on both sides of the court.

Wadkovsky and Sears finished as the games two highest scorers, with Wadkovsky putting up 17 and Sears chipping in 13.

“We knew we were going to have to battle with (Wadkowsky) and I thought (the Pioneers players) did a really good job with it,” head coach Laura Barry said, noting that while Wakowsky got shots early and some late in the game, the Pioneers managed to hold the Elon-commit back enough for the win.

Adding to the Pioneers’ problems was Kirsten Lewis-Williams, a long combo guard with speed who ran the Wildcats’ offense like a well-oiled machine. Lewis-Williams finished the game with 12 points while being a mismatch on both ends of the court.

Trailing for almost the entire first half, a late layup from Laurel Kiker got the Pioneers within two as they trailed 23-21 at the half.

The Pioneers struggled to keep pace in the third — falling behind by as much as 12 points — but kept plugging away, waiting for Lake Norman to slip up.

“We stayed with it,” Barry said. “We didn’t really change the game plan, we trusted it and stayed with it. We talked about how Lake Norman kind of makes games ugly with their pressure and how they defend, and it’s not a game where coaches have a lot of control. I give the players on the court all the credit for maintaining focus.”

As the Pioneers were trying to steal back a lead in the fourth, Lake Norman was dealt a devastating blow when Lewis-Williams fouled out of the game with three-and-a-half minutes left. Now against a weakened pack of Wildcats, the Pioneers’ comeback efforts kicked up a gear.

The Pioneers outscored the Wildcats 13-5 in the fourth quarter alone, with the momentum stretching back to the end of the third.

With a minute-and-a-half left on the clock and Watauga trailing 42-40, Sears was sent to the line with a chance to tie it up. After she sank both, Watauga held off multiple chances from Lake Norman to send the game to overtime.

The Pioneers carried their late momentum into the extra frame, and the Wildcats were now struggling to keep up.

“Down the stretch, we finished regulation with a stop we needed to go to overtime and then got stops that led us to win the game,” Barry said.

In overtime, the Pioneers kept the tenacity that helped them get there and were able to hold on for the 49-46 win.

Barry said that an early season opponent like Lake Norman was a great opportunity for her team. She noted that while the Pioneers had some issues with turnovers, it was overall a promising performance that the team can build on going forward.

Trying to keep the streak alive, the Pioneers will stay at home in search of win number four on Friday, Dec. 3, against Mountain Heritage.