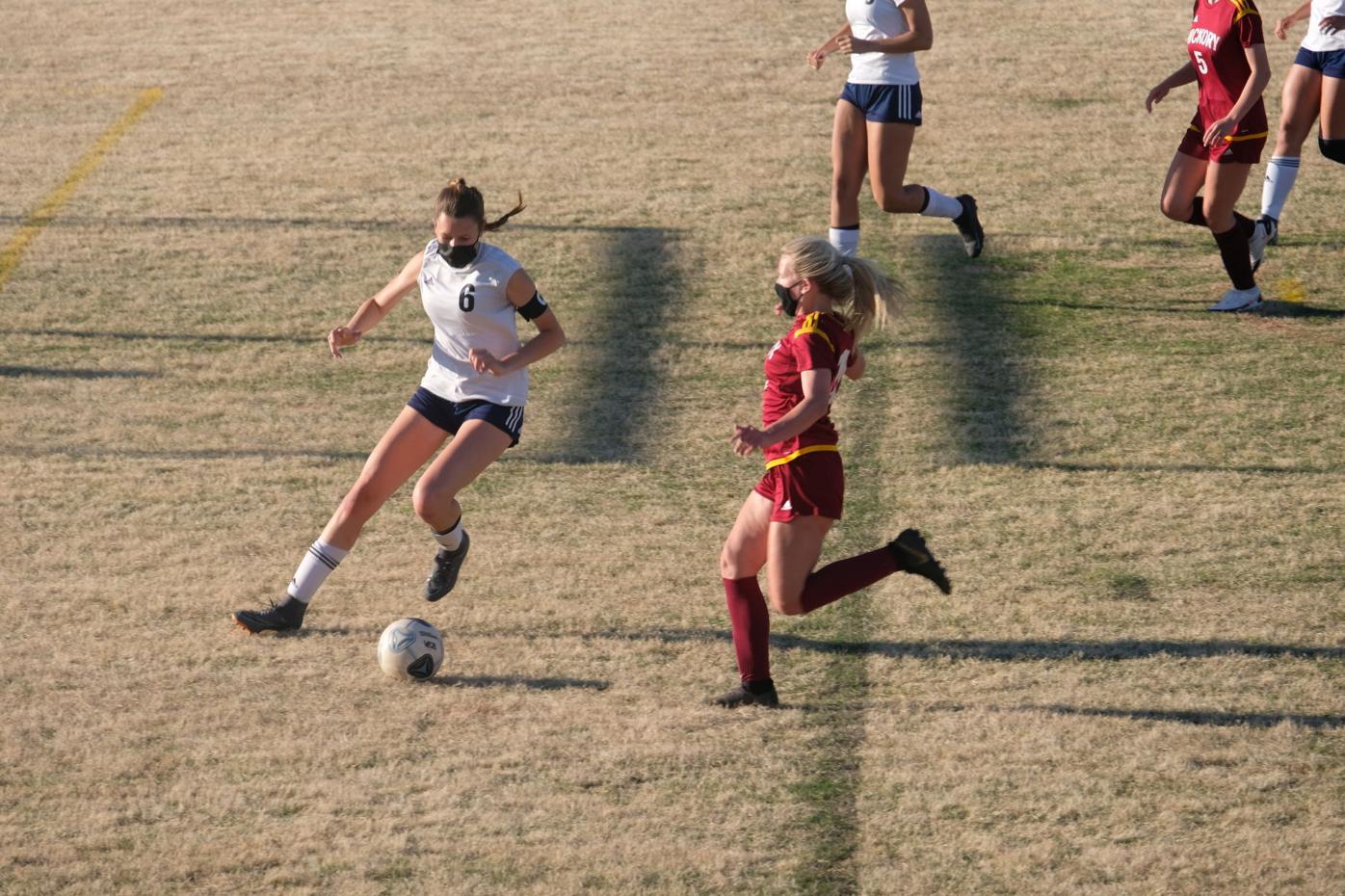 Captain and defender Abby Kamp (6) races for a loose ball against Hickory on April 15. 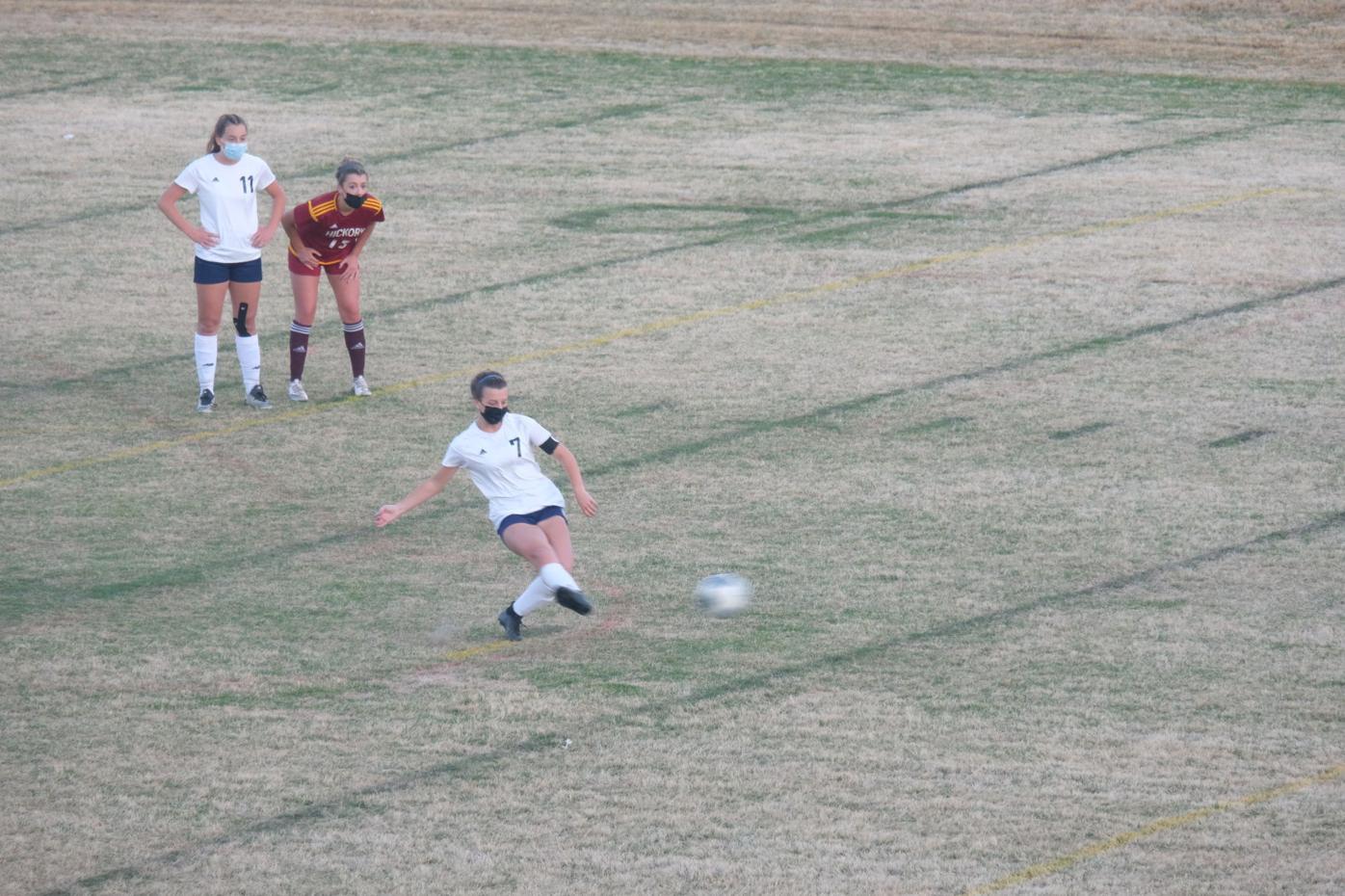 Watauga midfielder Shaelyn Sheaff (7) scores on a penalty kick against Hickory on April 15.

Captain and defender Abby Kamp (6) races for a loose ball against Hickory on April 15.

Watauga midfielder Shaelyn Sheaff (7) scores on a penalty kick against Hickory on April 15.

HICKORY — The hour-long drive back to Boone must have felt even longer for the Watauga Pioneers girls soccer team after they fell 3-2 to the Hickory Red Tornadoes on Thursday, April 15.

The Pioneers (6-3) were hoping to avenge a 4-0 loss to Hickory less than a month prior, while the Red Tornadoes (8-0) hoped to continue their unbeaten run. The Pioneers are now 4-2 in the six games since their first encounter with Hickory, with their only losses on the year coming against the top-two teams in the conference.

Early on, the Pioneers struggled to get past the Red Tornadoes’ whirling midfield, with every run being snuffed out before it had a chance to breathe. Hickory, however, was able to grab a handful of chances as the first half began, but was unable to finish.

Red Tornadoes midfielder Brooke Rowland broke the draw in the 17th minute, firing a low shot that went just past the keeper’s fingers and into the Pioneers’ goal, giving Hickory a 1-0 lead.

Although chances for Watauga were still hard to come by, they managed to tie the game before halftime when midfield dynamo Shaelyn Sheaff bagged the equalizer.

After being tied at halftime, the second half was a more even affair for the rivals. Watauga began to knock on the door more frequently, while the Red Tornadoes continued their relentless pace of pressure.

After the game, Pioneers head coach Chris Tarnowski noted Hickory’s physicality and the speed at which they play have been keys to their success.

Hickory would nearly get the game out of reach with a four-minute stretch in which they tripled their scoring tally.

In the 50th minute, a weak shot made it’s way toward an open Watauga net. A heroic intervention attempt from skipper Abby Kamp nearly saved it, but the goal had been scored by the time the heartbroken defender could get her foot to it.

Four minutes later, Hickory’s Addie Barrier made it 3-1, but the clock was still ticking.

Sheaff found herself staring down Red Tornadoes keeper Taylor Rose as she prepared to take a penalty shot in the 60th minute. A low shot to the left appeared to be blocked, but Rose did not hold on as the ball slipped into the net and cut Hickory’s lead to just one.

The final 20 minutes of the game were a mad dash, Watauga wanting to save their night while Hickory needed a final nail for their foes’ coffin.

Ultimately, a third goal did not come to the Pioneers’ rescue as Hickory secured the win.

Now on a two-game skid, the Pioneers will have the chance to get back on track against Freedom on the road on Monday, April 19.