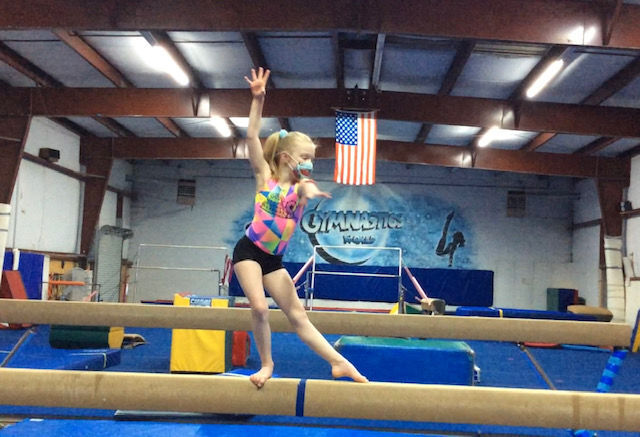 During practice, gymnasts at New River Gymnastics can take their mask off for safety, but Elle Jones keeps hers on. 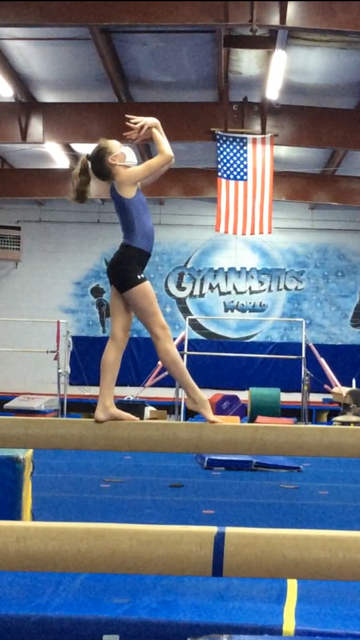 Gracyn Blanton of New River Gymnastics works on her routine in practice.

During practice, gymnasts at New River Gymnastics can take their mask off for safety, but Elle Jones keeps hers on.

Gracyn Blanton of New River Gymnastics works on her routine in practice.

BOONE — When the COVID-19 pandemic hit America in early 2020, millions of businesses closed their doors temporarily as efforts to slow the virus spread. Some did not reopen, others came back with minimal complications and some were like New River Gymnastics, whose world was turned upside down.

When the pandemic began, New River Gymnastics was in the middle of its spring semester; it follows a similar schedule to Appalachian State University as most of the coaches are university students. At the time, the competition team was practicing, getting ready for events, and Owner and Coach Evan Redmond was forced to press pause on it all.

“It was one of the hardest decisions,” Redmond said. “I knew how important it was for these girls not only to have a sport, but also to have these friends and these coaches who they could look up to and that was all of a sudden getting taken away from them.”

Redmond said the gym shut down abruptly alongside other businesses when the pandemic began to pick up steam, before reopening in June thanks to a specific classification.

“They were allowing people to open up summer camps, so we took advantage of that,” Redmond said. “We followed everything that they allowed for summer camps to open up for teams, only it was still close to pre-team and rec classes but we were at least able to get the team members back at about mid-June.”

Part of reopening is an abundance of precautions and stricter cleaning protocols. Redmond said the responsibility falls on her and her coaching staff, but the girls have been taking it seriously as well. She said the gym has a strict mask mandate — with the only exceptions being during routines — as well as staggered entry and exit, temperature checks and the group wipes down each mat that was used after practice.

“I worried for months that we weren’t going to be able to keep this small business open,” Redmond said. “Being here now that we’ve been open almost six months and still kicking, it really was a big blessing for us.”

According to Redmond, the pandemic and subsequent closure caused a drastic shift in the competition team’s schedule.

“We typically start our tryout process around December or January, then we practice straight through all spring and summer and then we usually start competitions around September,” Redmond said. “(COVID-19) completely delayed our normal meet season, which is September through January/February, and so we are just getting ready to start our first competition at the end of January. So now, our competition season is going to run January through April, potentially May.”

One thing that did have to be sacrificed were the tryouts. The plan was to hold off on tryouts until summer 2021, but the team was still able to add new members who expressed interest. Even with the new additions, the team still ended up on the smaller side at 14 members. Redmond said the size of the team leaves no issues, though.

“It’s a perfect amount especially when we go to competitions and stuff,” Redmond said. “Sometimes it’s hard when you have a really large team, you’re not able to provide all the attention to each individual kid and everything and so I actually love having a small team. I think it also just makes all of the girls closer together; they bond so much better with each other.”

Redmond said that at the time, there was no word on whether or not there would even be a competition season. However, she noted that with a sport like gymnastics, keeping up with strength and flexibility training is too important to ignore.

“It was so important that we were able to get them back in the gym as soon as we possibly could,” Redmond said.

Redmond added that the pandemic has shifted so much of her girls’ schedules that it has been hard to get into a routine. With not only gymnastics being put on hold, but also school going fully virtual and coming back as partially virtual, the consistency of previous years has vanished.

“We started opening up all of our team practices to all of our team kids,” Redmond said. “That way if they want to be in the gym for four or five days a week they have that opportunity, just because they’ve missed out on so much. We want them to make sure that they are getting everything they possibly can out of what little time we did have to prepare for their competition season.”

Now back on track, Redmond said the plan is to return to competition safely. The team’s first competition is scheduled for Jan. 29 in Cherokee at Harrah’s Casino.

“I have reached out to meet directors, different organizations to try to find what meets are going to be using every protocol possible like what we are using,” Redmond said.

Part of the expectations for the season will be virtual meets, which eliminates exposure to potentially catching COVID-19 but also brings in its own challenges. Redmond said no one on the team has ever had to do something like a virtual meet, but the same goes for their competitors as well.

Despite the hurdles it took to get this far, the team has four competitions scheduled, which Redmond said is about average for a season. Even then, nothing is set in stone. Other sports have shown that scheduling competitions during a global pandemic can lead to cancellations, rescheduling or a combination of both.

However, Redmond said what her girls have done to get this far has been impressive enough on its own.

“I couldn’t be prouder of where my kids are after missing so many hours in the gym, they look as if they have been there since March,” Redmond said. “They have worked so hard to get where they are. I have had girls who are coming four times a week, I have girls who are staying until 8:15 at night to do all these practices and get in extra time. There are some who are doing private lessons, attending open gyms, just to get in all that extra time that they possibly can but they look so ready for this competition season and I am just so proud of where they are.”