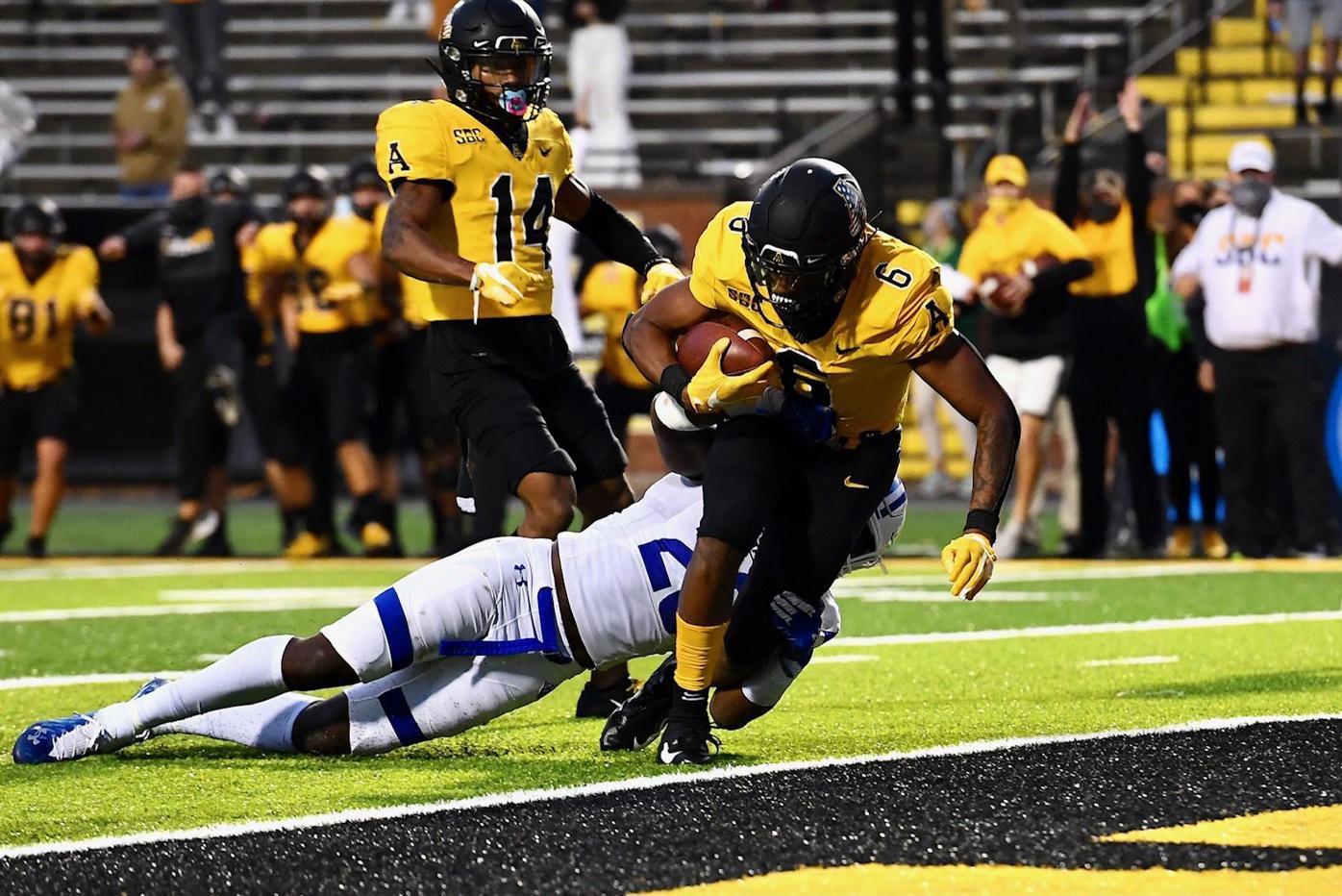 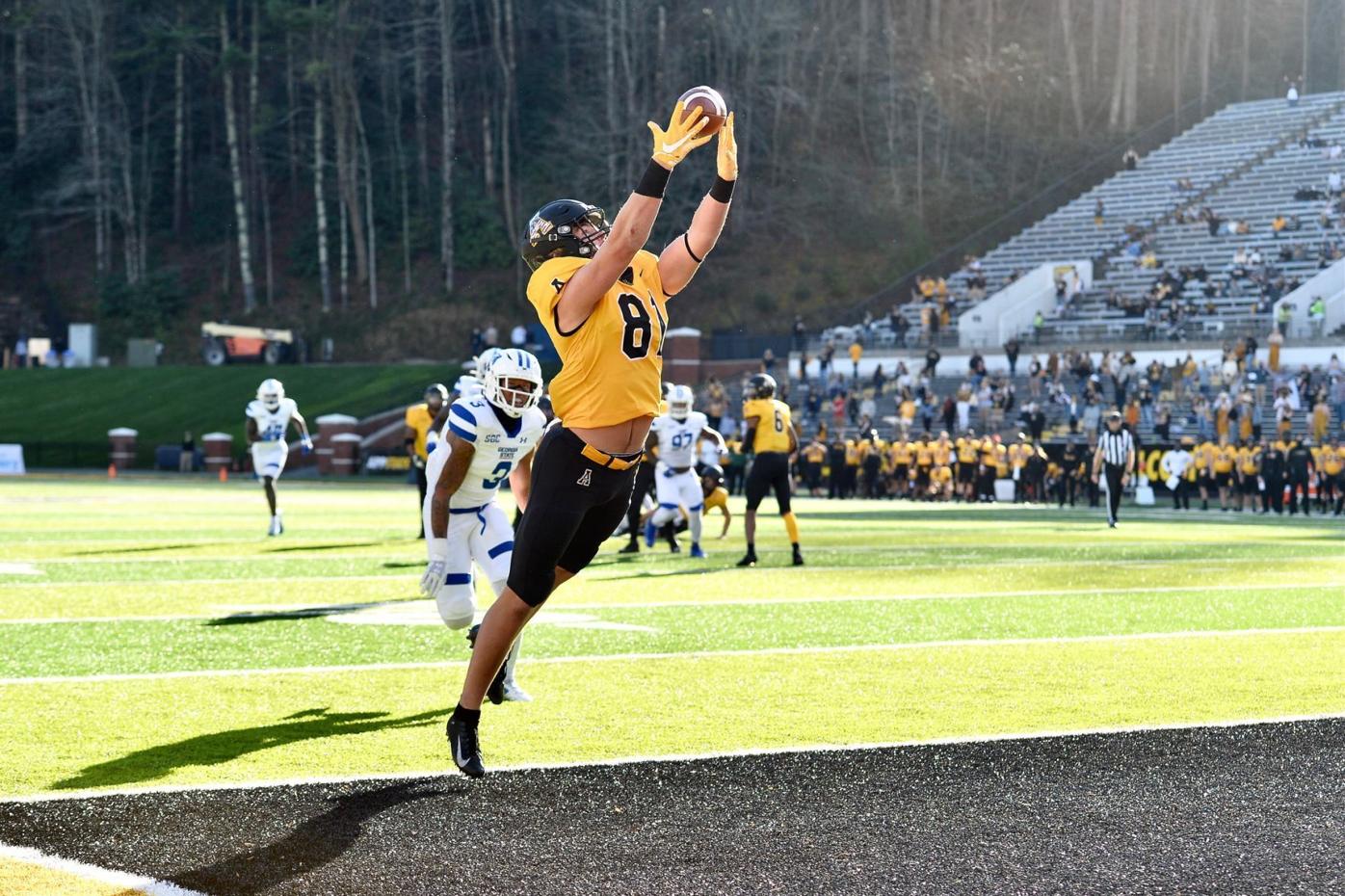 Miller Gibbs (81) brings in a Zac Thomas pass in the first half of App State’s 17-13 win over Georgia State on Saturday, Nov. 14, at Kidd Brewer Stadium.

App State linebacker Trey Cobb (7) nearly gets his hand on the ball while pressuring Georgia State QB Cornelius Brown IV during the first half of the Mountaineers 17-13 win over the Panthers at Kidd Brewer Stadium on Saturday, Nov. 14.

Miller Gibbs (81) brings in a Zac Thomas pass in the first half of App State’s 17-13 win over Georgia State on Saturday, Nov. 14, at Kidd Brewer Stadium.

App State linebacker Trey Cobb (7) nearly gets his hand on the ball while pressuring Georgia State QB Cornelius Brown IV during the first half of the Mountaineers 17-13 win over the Panthers at Kidd Brewer Stadium on Saturday, Nov. 14.

BOONE — Every winning team worth its salt has a “next man up” mentality embedded in its culture. Appalachian State football is no exception, but that philosophy was surely tested Saturday afternoon in the Mountaineers’ 17-13 Sun Belt Conference win over Georgia State at Kidd Brewer Stadium.

Some 2,100 fans were reportedly allowed to view this game firsthand. Almost all groaned in unison when starting quarterback and team captain Zac Thomas appeared to be hit out of bounds after a QB keeper mid-way through the fourth quarter.

No penalty flags were thrown, but Thomas was sent sailing and sprawling into a blur of sideline equipment and App State team personnel. He went down and never got up until medical personnel and App State trainers rolled him onto a flat board, lifted him onto a flatbed cart, secured his head, neck, shoulders, torso and legs as precautionary measures, then hauled him off to a waiting ambulance.

Meanwhile, Thomas’ teammates had a game to finish. At that point, with roughly six minutes remaining in the game, the Mountaineers trailed the Panthers, 13-10. What many thought would be an offensive shootout was instead a defensive gem and App State had struggled to put points on the board the entire afternoon.

Enter Jacob Huesman, a fifth-year senior who made a college career out of being a backup quarterback. As a freshman, he played second fiddle to Taylor Lamb. The last four years, to Thomas. He had a couple of appearances in mop-up duty in Mountaineer wins earlier this year, the same as last year, but now his number was called with a game was on the line. It mattered. No time to “loosen up.” Forget throwing a few practice passes on the sideline.

“At the end of the day,” Huesman told reporters after the game, “these are the types of things you have to prepare for, whether you’re a freshman or a senior like myself, a fifth-year guy, a backup quarterback. You just have to be ready and be ready all the time. When your number is called, it’s time to go. That’s where my head was at — I picked up my helmet, and I told myself it was time to go.”

And did he ever go, picking up where Thomas left off in directing the offense to the mid-fourth quarter touchdown that proved decisive in the Mountaineers’ win. Ironically, as sophomore running back Camerun Peoples scored the final TD with a 10-yard burst through a gap on the left side of the offensive line, the ambulance was arriving to take Thomas to the hospital, lights flashing, sirens blaring.

After the Mountaineer defense stopped the Panthers’ next offensive possession cold (5 plays, -2 yards, aided by a QB sack of the Panthers’ Cornelius Brown IV by defensive lineman Demetrius Taylor and sophomore OLB Nick Hampton), Huesman returned as field general for App State’s clock-eating final drive to preserve the win. Once again it was Peoples moving the chains with powerful runs through the center of the line of scrimmage.

Statistically, the game was as even as the score.

If anything, the difference in the game was the Mountaineers’ ability to get points off of a Panthers turnover, a fumble, while Georgia State was unable to capitalize on App State’s only turnover of the day, an interception hurled by Thomas on a well-covered long pass intended for wide receiver Malik Williams. GSU freshman defensive back Antavious Lane came down with the ball in the end zone for a touchback, but the Panther offense could do nothing with it.

App State head coach Shawn Clark told reporters during his post-game press conference that Huesman is as hard-working as any player he has on the team: “Every day he practices like he is the starter.”

So the first-year Mountaineer head coach was not surprised at Huesman’s ability to get the job done.

Clark also said that he talked briefly with Thomas as he was being taken from the field and the senior All-Sun Belt performer reported that he had feeling in all extremities. However, the extent of the injury was unknown.

Undoubtedly, Huesman’s preparation will pay dividends next weekend when the Mountaineers (6-1, 4-0) travel to Conway, S.C., to face 15th ranked (nationally) Coastal Carolina (7-0, 5-0). The winner will be the odds-on favorite to win the Sun Belt’s East Division championship and earn a berth in the Sun Belt Championship Game. The third-place team in the East Division is Georgia Southern (6-2, 4-2), which has two conference games remaining: at Georgia State, Nov. 28 and vs. Appalachian State on Dec. 12. In October, the Eagles were defeated by Coastal Carolina, 28-14, and by Louisiana in late September, 20-18.