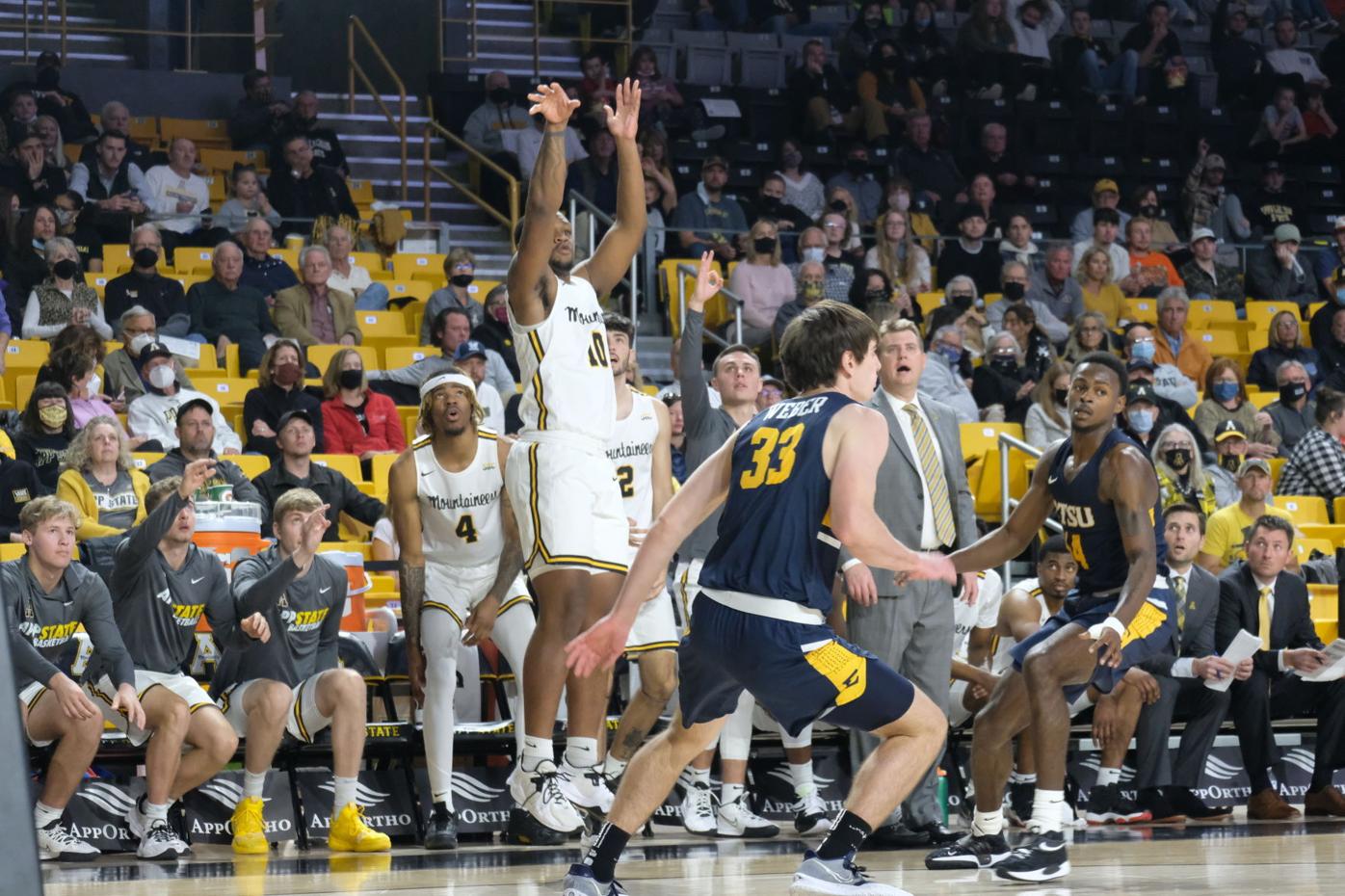 App wing Miachael Eads Jr. (10) was lethal from beyond the arc against Nov. 12, making three of his four three-pointers at crucial times in the second half. 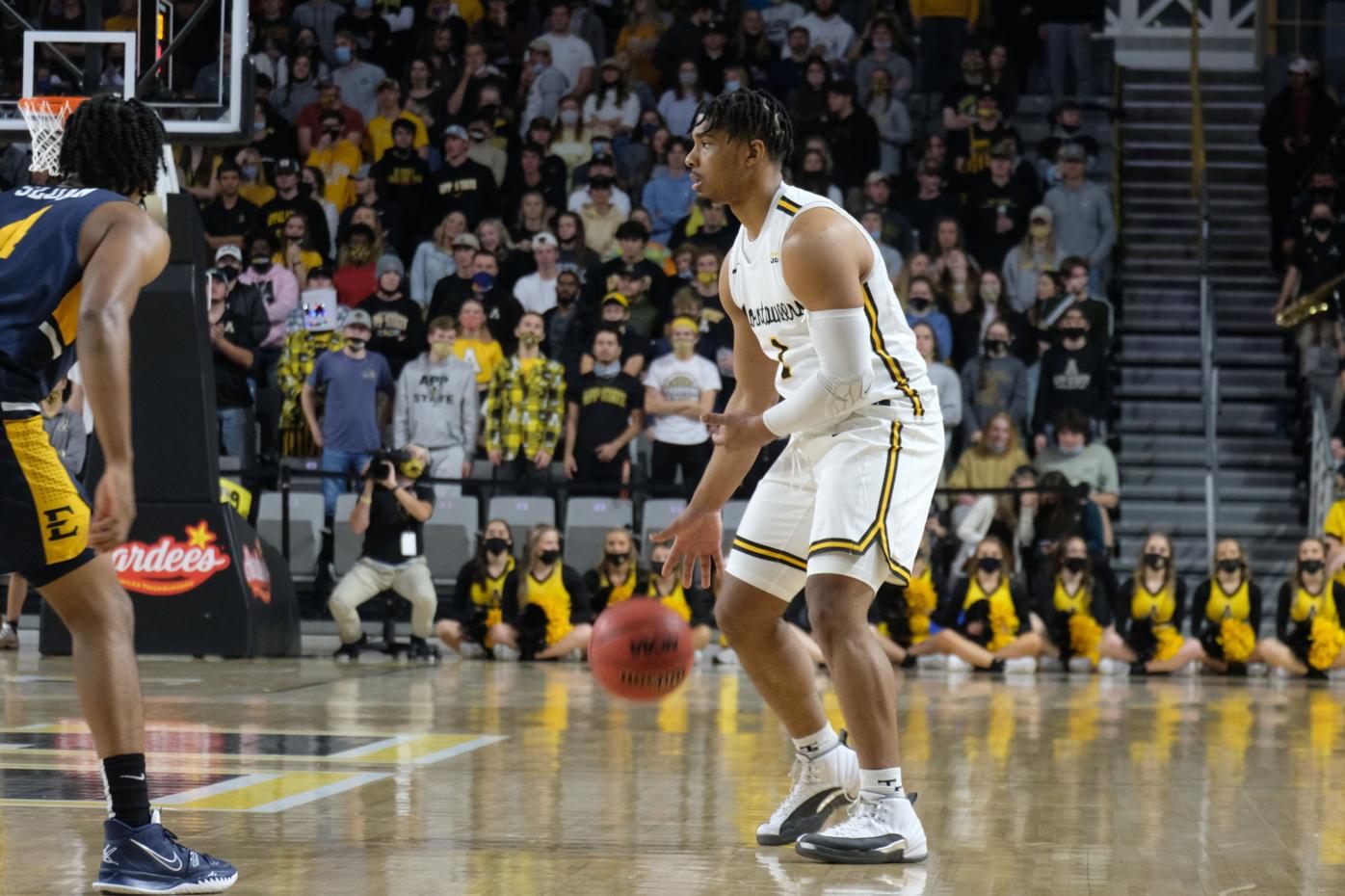 App guard Justin Forrest was limited to three minutes in the first half, but came up clutch when his team needed to win against ETSU. 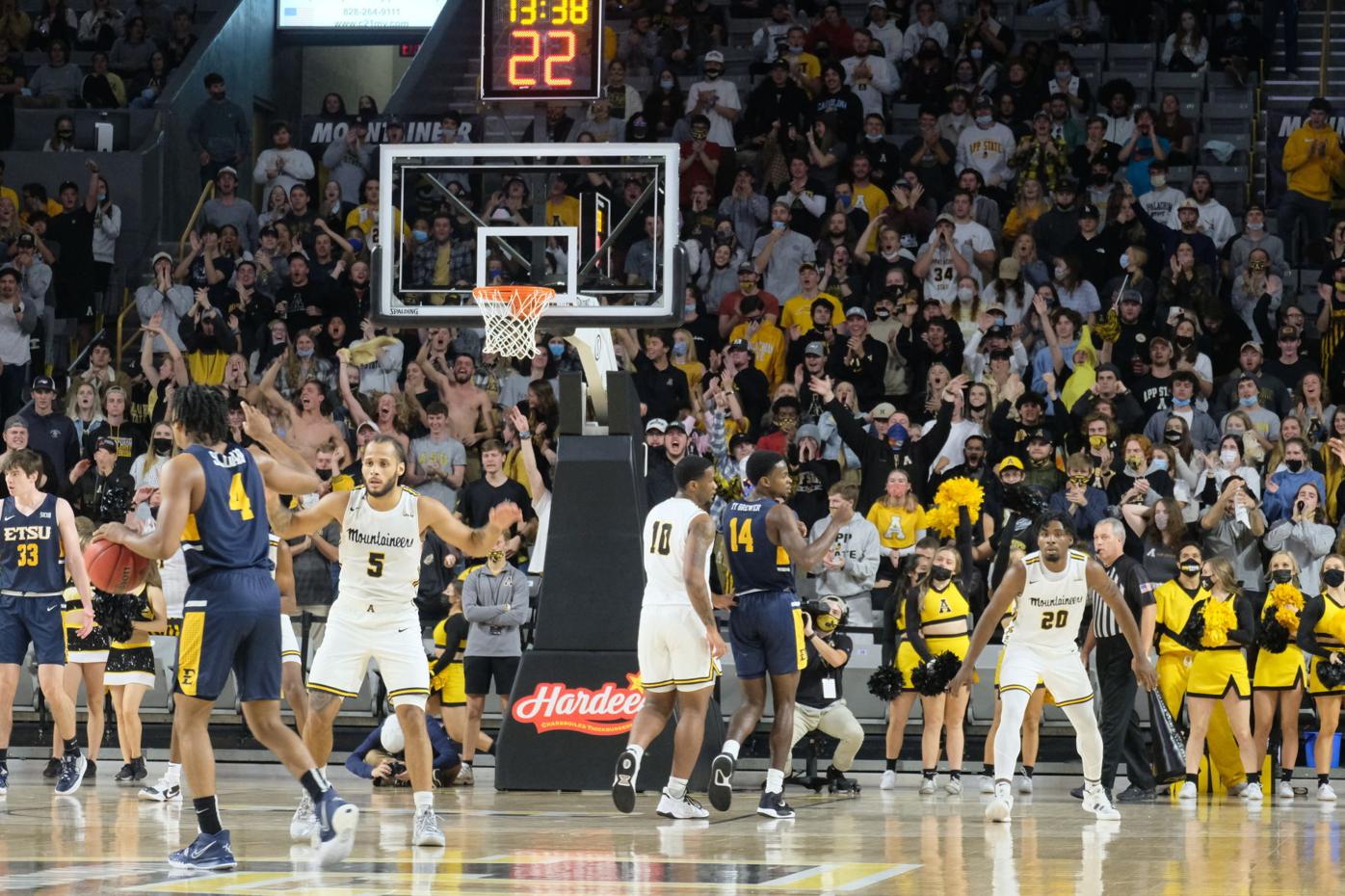 Last season, the App State student section was full of carboard cutouts. Against ETSU on Nov. 12, the Buccaneers had to go face-to-face with a packed stand in the second quarter.

App wing Miachael Eads Jr. (10) was lethal from beyond the arc against Nov. 12, making three of his four three-pointers at crucial times in the second half.

App guard Justin Forrest was limited to three minutes in the first half, but came up clutch when his team needed to win against ETSU.

Last season, the App State student section was full of carboard cutouts. Against ETSU on Nov. 12, the Buccaneers had to go face-to-face with a packed stand in the second quarter.

In the time since his team’s Cinderella run to the Sun Belt Conference title and trip to March Madness, App State head coach Dustin Kerns has taken every chance to call on fans to pack the Holmes Convocation Center. Combined with a solid traveling contingent of Buccaneers fans, Holmes was loud even before the opening tip with the 3,401 person crowd the largest in 10 years, according to the athletic department.

After dropping their first game of the season against Iona on the road, the Mountaineers (1-1) went into the Nov. 12 matchup looking to start the season undefeated at home. Meanwhile, the Buccaneers (0-1) were hoping to grab a win before playing a nationally ranked Tennessee team in two days.

A nifty inside pass from Michael Almonacy gave Donovan Gregory the chance to score the first home points of the new season, and he did so with an emphatic dunk that got the crowd to their feet right away. Gregory’s slam began a 9-0 run as the Mountaineers raced to an early lead, but ETSU battled back by the midway point of the first half.

With just under 13 minutes left in the first, ETSU took a 13-11 lead with a jumper from David Sloan and were quick to run with it. Five minutes later, the Buccaneers led by double digits and the Mountaineers were struggling to stem the bleeding.

A first half buzzer beater from Delph cut the Buccaneers’ lead to five, and ETSU’s scoring drought was at two minutes heading into the locker room. By halftime, ETSU had held the lead for more than two-thirds of the game.

In the first half, ETSU had gotten 15 points from their bench, while the Mountaineer bench only had four.

While going back to the starters could have helped, Kerns’ hands were partially tied with star guard Justin Forrest picking up three quick fouls in the first half, limiting him to only three minutes. On the opposite end was Almonacy, who was a mainstay in the first with 18 minutes of playing time.

Gregory — who played over 37 minutes and led the team with 19 points — said guys needed to step up when needed.

“Everybody stepped up. Justin had early foul trouble — next man up,” Gregory said. “(Michael Eads) came in, he had big minutes, (C.J. Huntley), (Chris Mantis) had big minutes. They just did what we needed to do and we got it done as a team.”

After a first half which mostly saw App State trying to keep up, the second half saw their tides turn and the game became as tight as it could be.

With 14 minutes left on the clock, Almonacy drained a three to give the Mountaineers a 42-41 lead — the first Mountaineer lead in almost 20 minutes.

After Almonacy’s three, neither team managed to run away with a lead for the rest of the game. The back-and-forth was spearheaded by Forrest and Michael Eads, who combined for 18 points in the second half.

While Eads only had nine points in the game, they came on only four shots as he hit three from beyond the arc.

“Bad coaching, I should have gotten him more shots,” Kerns joked about Eads’ game. “He’s put the work in, our coaching staff has done a great job and this is the kind of game he needed. When he shoots it, I think it’s going in.”

Meanwhile, the Buccaneers had gone from leading the game to having to chase the lead. The first half saw ETSU hit on 36.8 percent of their threes, but App’s perimeter defense brought that down to 21.4 percent in the second.

Tied at 65-65 with 50 seconds on the clock, Forrest sank a pair of free throws to put App State in front, but ETSU answered right back with a midrange jumper from Ledarrius Brewer. The Mountaineers needed someone to come up clutch. So they kept the ball in Forrest’s hands to make something happen.

A blocking foul from Silas Adheke sent Forrest to the line and he made it look easy, sinking both free throws to make it 69-67. The Buccaneers had one final possession, only to see it come up short.

The win was the start of a three-game home stand for the Mountaineers, who faced William Peace on Monday, Nov. 15, and UNC-Charlotte on Thursday, Nov. 18.