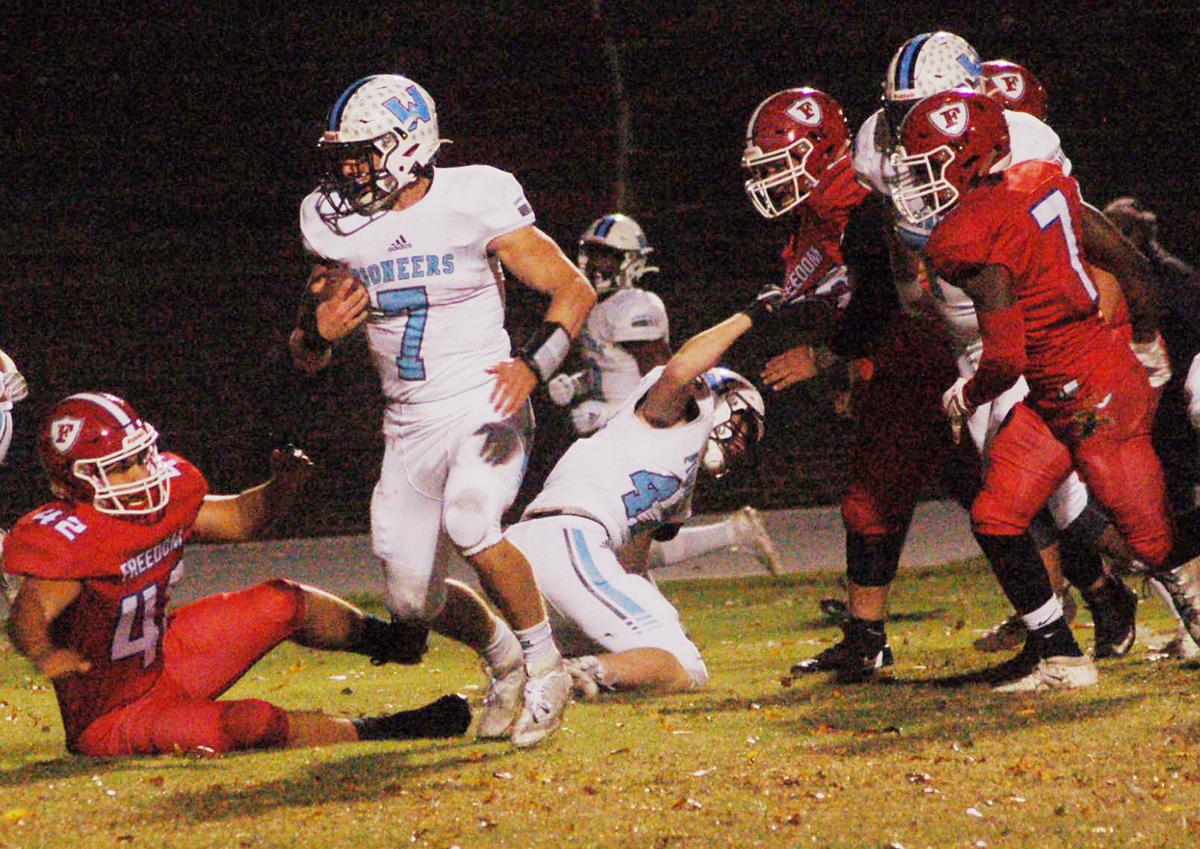 Anderson Castle runs the ball through Freedom’s defense, with the help of an Orlando Leon block, in the Pioneers’ win Nov. 1. 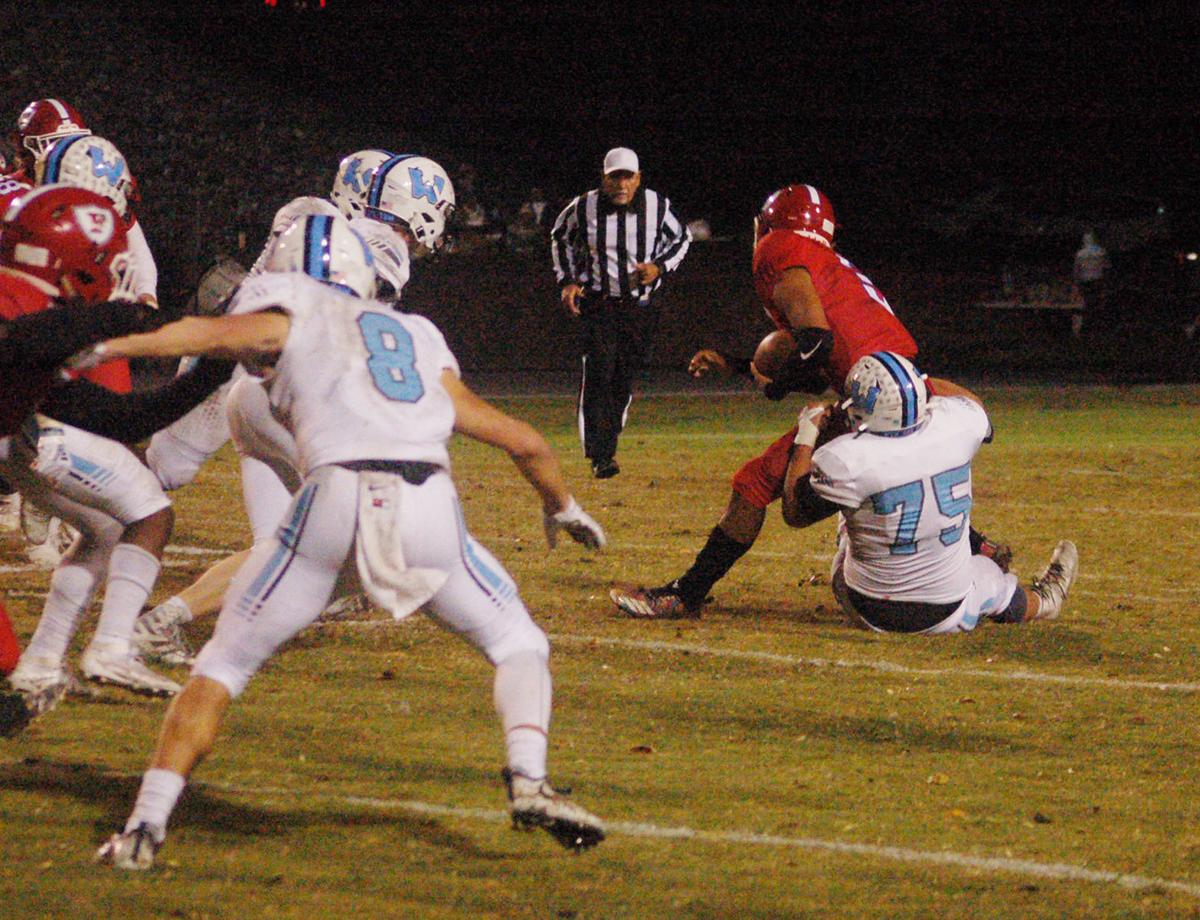 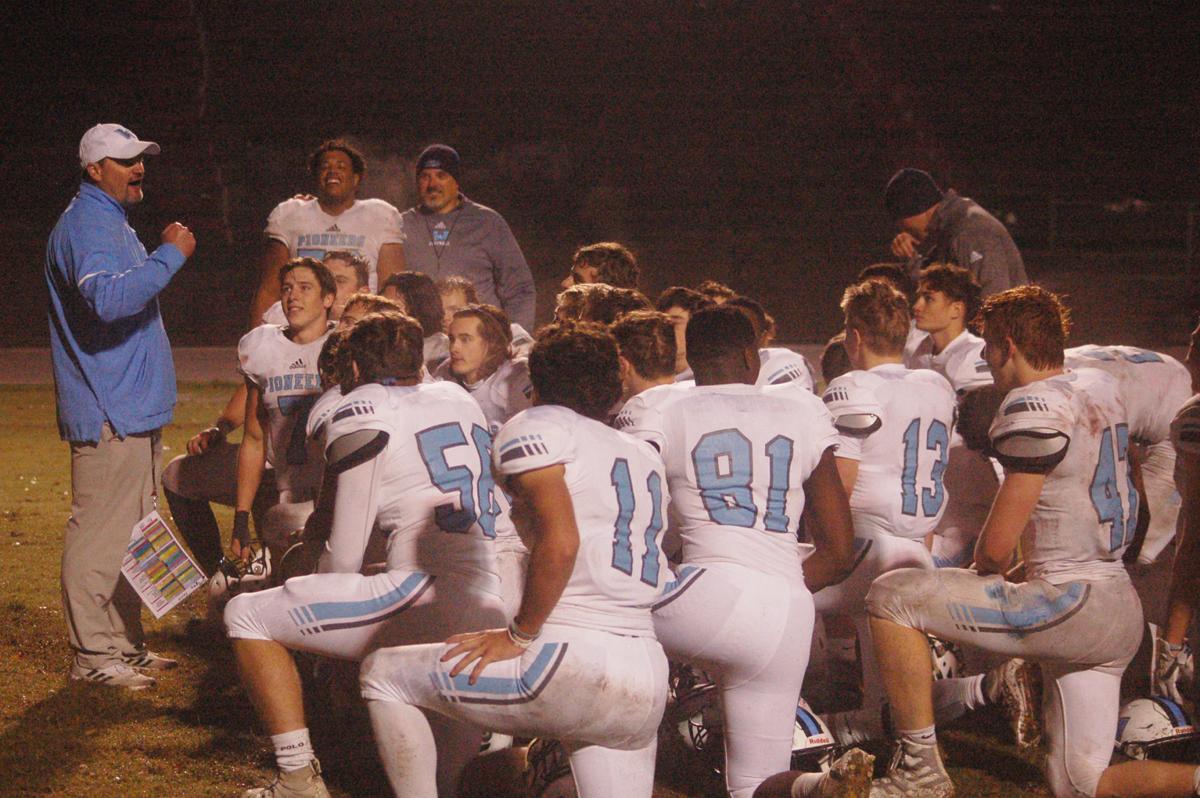 Watauga football coach Ryan Habich talks to his players following their 48-33 win over Freedom on Nov. 1.

Anderson Castle runs the ball through Freedom’s defense, with the help of an Orlando Leon block, in the Pioneers’ win Nov. 1.

Watauga football coach Ryan Habich talks to his players following their 48-33 win over Freedom on Nov. 1.

Watauga faced a formidable roadblock on its way to a second straight Northwestern Conference championship. A loss at Freedom on Nov. 1 would put a Watauga league title in serious jeopardy.

Pioneers quarterback Anderson Castle was not going to let that happen.

The senior, who was named to the North Carolina-South Carolina Shrine Bowl a week earlier, ran for 205 yards and scored four touchdowns in Watauga’s 48-33 victory over the Patriots on Freedom’s Senior Night.

Castle lead Watauga on seven touchdown drives on eight Watauga possessions. He scored touchdowns on the first two drives, one that went for 13 yards, and the second for 14 yards, to give the Pioneers a 13-0 lead.

Castle also scored on a 4-yard touchdown run in the third quarter and a 25-yard TD run in the fourth quarter. Castle, who attempted one pass that fell incomplete, led the Pioneers to 363 yards in total offense, all on the ground.

Freedom also got 150 yards and a touchdown run on 27 carries from running back Chase Young. Birchfield and Young were the only Freedom players who ran the football for the Patriots, who finished with 392 yards in total offense.

Watauga got a scoring contribution from Jaiden Bond on special teams. After Birchfield scored on a 23-yard run in the second quarter that brought the Patriots to within 27-14, Bond returned the ensuing kickoff 77 yards for a touchdown, giving the Pioneers a 34-14 lead. Young responded with a 7-yard touchdown run to leave Freedom behind 34-21.

Freedom had a chance to tie the game when the Pioneers led 41-33. The Patriots, starting from their 9-yard line, drove to the Watauga 42-yard line, but saw their drive stall on three Birchfield incomplete passes, two that were dropped. A fourth-down pass was broken up by the Pioneers, which gave Watauga a key stop.

The Pioneers, starting with 8:13 left in the game, drove 58 yards with Castle gaining 52 of those yards. He scored a touchdown from 25 yards out to give the Pioneers a 48-33 left.

Freedom got the ball back at its 47-yard line and drove to the Watauga 24-yard line, but ended with a Burchfield incompletion.

“We’ve been talking about it all week that we’ve worked so hard and prepared so hard and we weren’t going to back down to the bullies this week,” Watauga linebacker Orlando Leon said. “We just gave it our all today.”