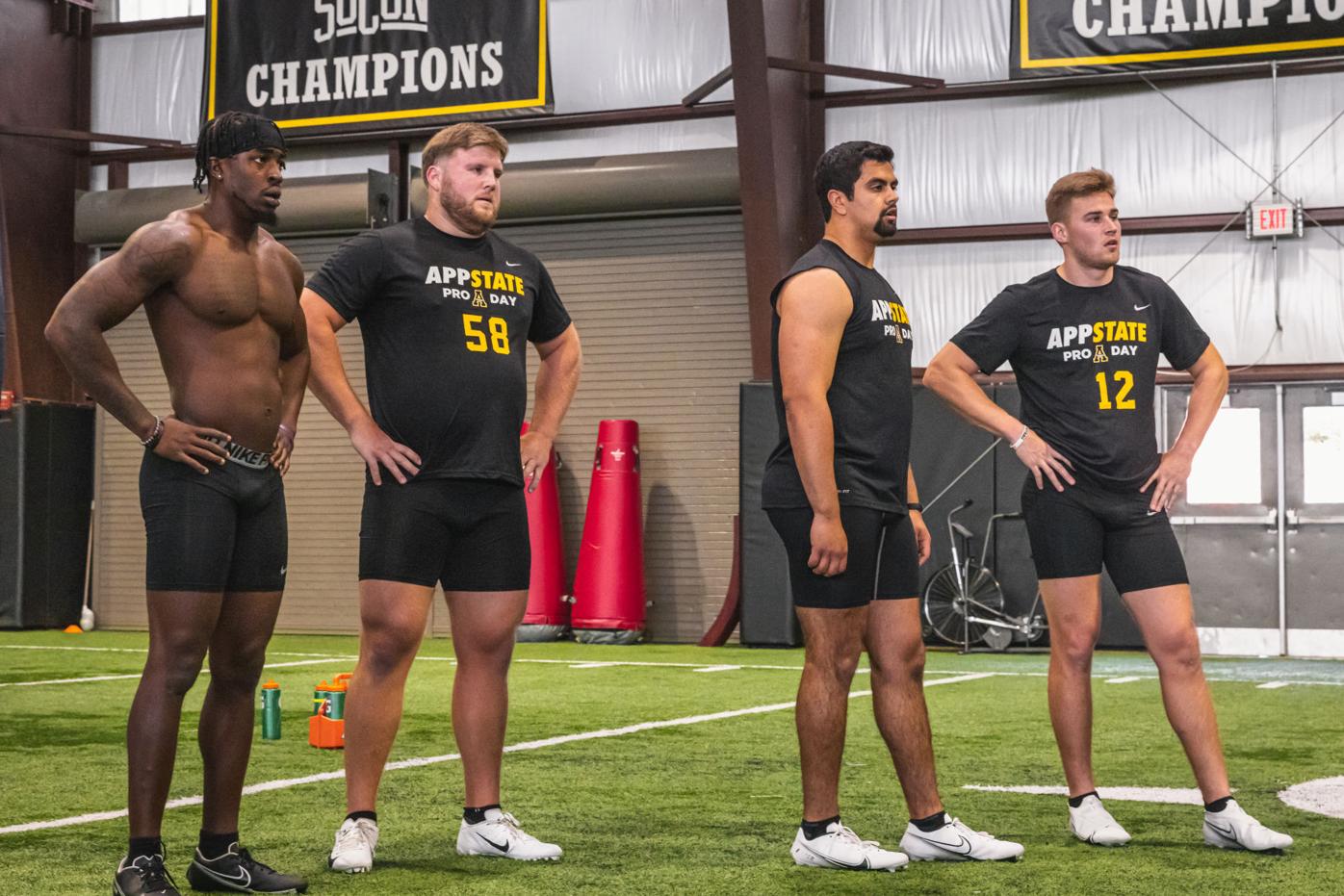 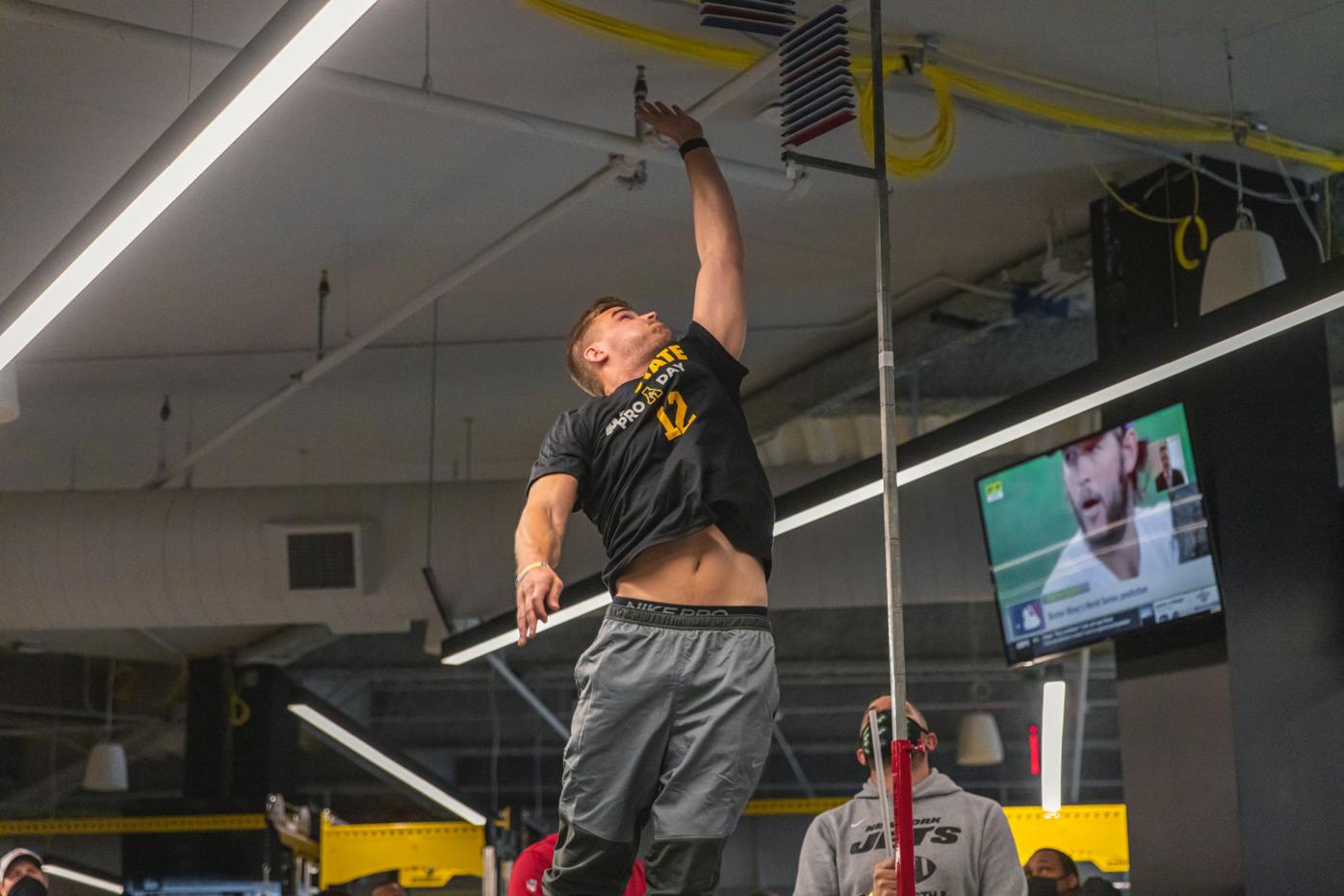 Zac Thomas gives a demonstration of his lift-off capabilities while testing his vertical. 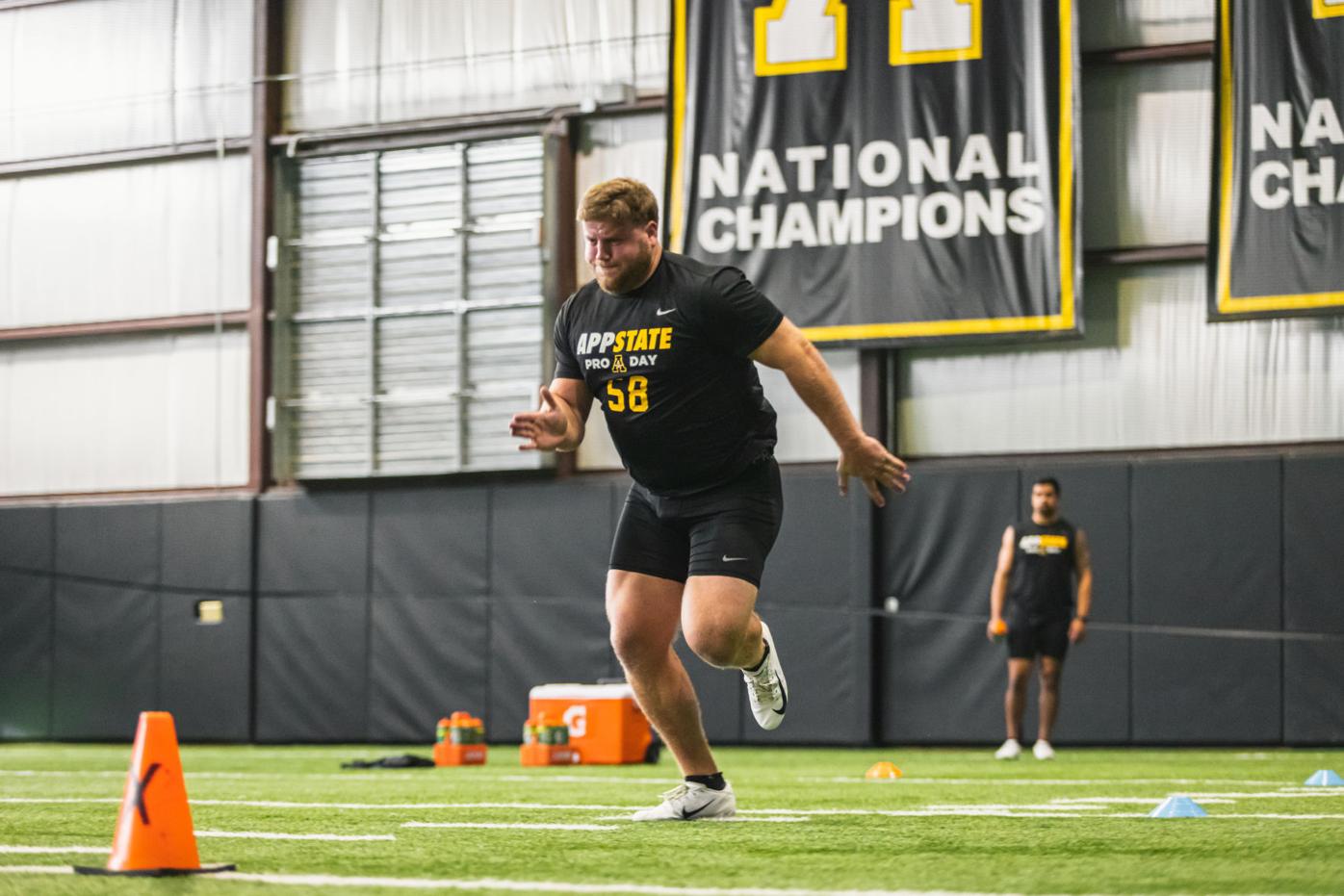 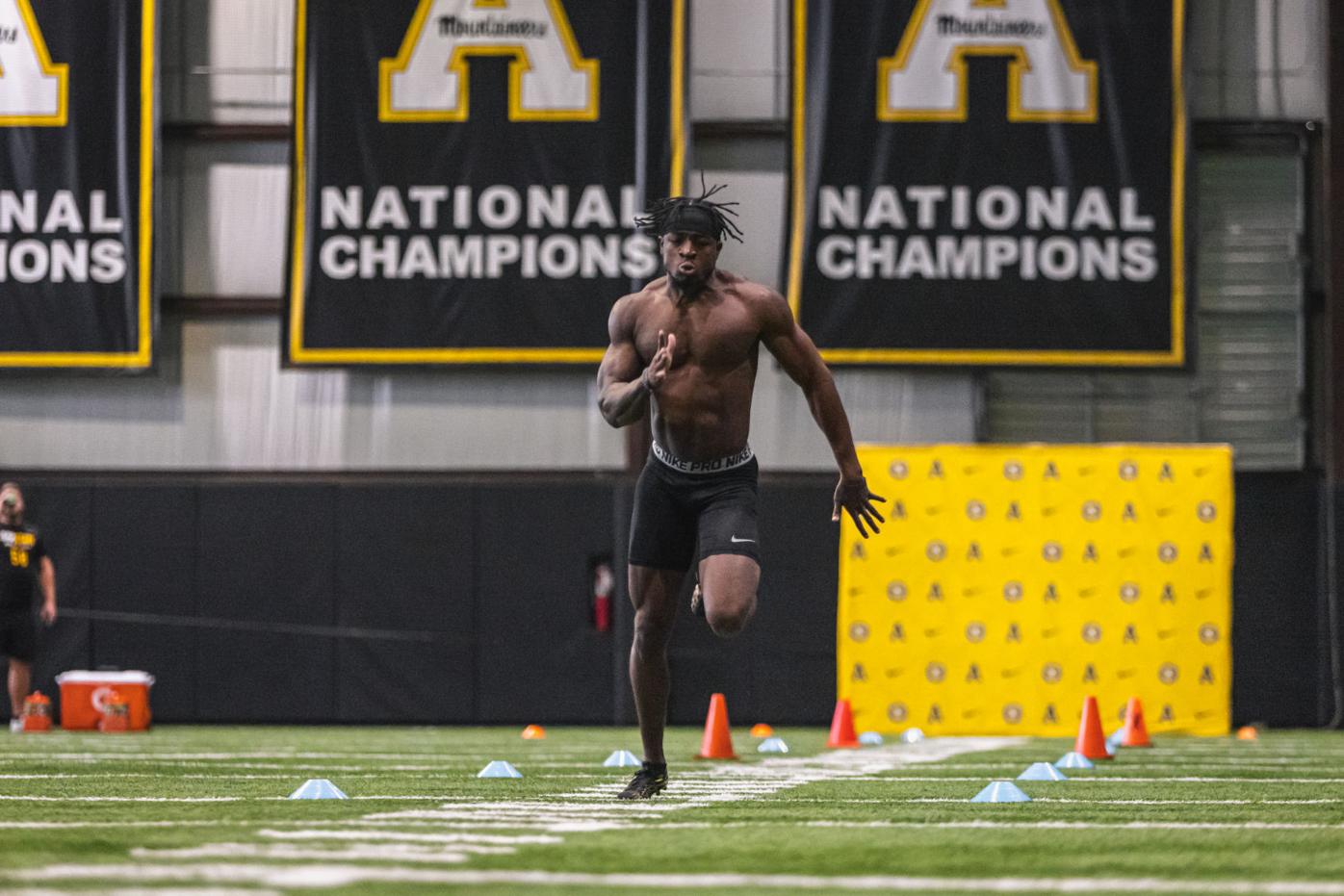 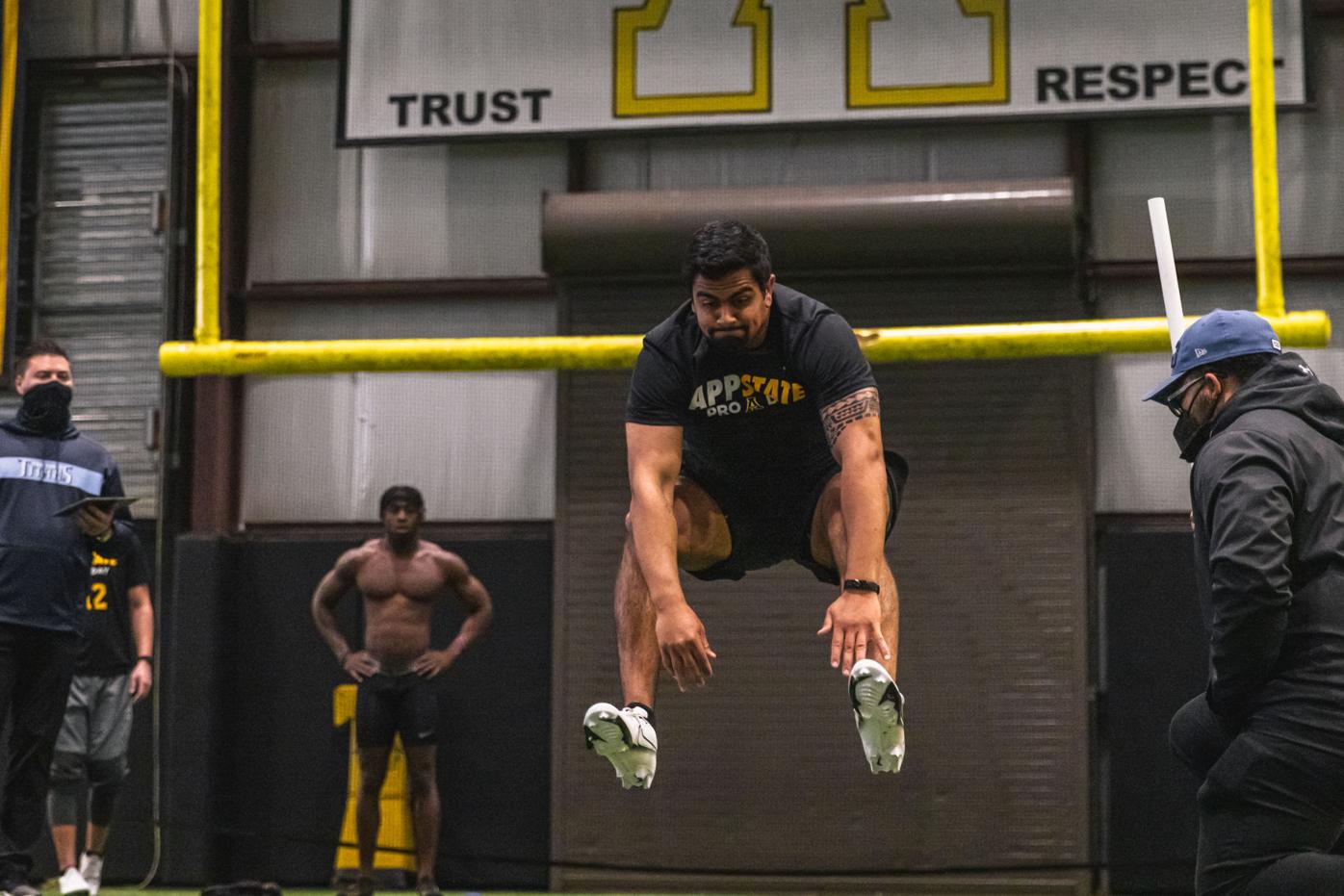 Noah Hannon works out at App’s pro day on April 1.

Zac Thomas gives a demonstration of his lift-off capabilities while testing his vertical.

Noah Hannon works out at App’s pro day on April 1.

BOONE — Prospects for the NFL Draft only get one pro day, their chance to show their skills on home-turf, and four Mountaineers took that opportunity on Thursday, April 1.

The pro day was just part of the NFL Draft season, which essentially began as soon as the college football season ended. Due to COVID-19 restrictions limiting teams’ abilities to get up-close-and-personal with prospects, opportunities like pro days gained more weight, leading to intense training in the build up.

“It’s been a grind,” offensive lineman Ryan Neuzil said. “I trained back home for 10 weeks. That was a long time, but felt like it went by so quick, and I was kind of just ready for this to get over with … It was just good to finally showcase my abilities.”

Neuzil showcased his explosiveness with a 29.5 inch vertical and 30 reps on the bench while putting in a time of 5.09 seconds in the 40-yard dash.

Part of Neuzil’s preparations was putting on weight, having played his senior year at around 287 pounds, he said. His plan, which he achieved, was to get above 300 pounds for the pro day.

“I was able to put it on about 15 pounds, still perform very well and still be able to do the drills with the added weight,” Neuzil said.

After playing his college career as a center, Hannon said teams had called him about working out as a fullback

“Honestly, I was not going to participate in Pro Day originally,” Hannon said. “I’m at home, living my life … Then, I got a couple of calls over a couple of weeks from some teams and they’re all saying the same thing, ‘Hey, what do you think about playing fullback, would you mind doing that for us?’”

According to the program, Hannon put up a 9-foot broad jump and a 29.5-inch vertical, as well as caught some passes from Thomas.

“It was fine, I had a good time,” Hannon said of his pro day. “I think I could have performed maybe a little better … but at the end of the day, I went out there and did the very best that I could today and put that on display. Now, for me it’s what God has in store from here on out and see where he takes me now.”

“It was all about Zac, I just wanted to come in and be the best receiver I can be to make sure he gets a fair shot at the NFL,” Jones said in a video posted to the program’s Twitter.

Thomas said he threw 20 passes, with a mix of routes that he knew scouts wanted to see out of him. He said that in between the end of the season and the pro day, he worked specifically on little things scouts want to see in a quarterback prospect.

“When a scout looks at a quarterback and judges on talent, they always want to see the ball rise instead of fall whenever it comes out of your hand,” Thomas said. “So that’s just something that I worked on heavily whenever I was training, just trying to get better arm angles, put more velocity on the ball and put the ball head higher instead of going low in the dirt. I spent a lot of time working on this and I’m just pleased with the results.”

The only defensive player to participate, All-American corner Shemar Jean-Charles put in a blistering 4.47 40-yard time, 19 bench reps, a 35-inch vertical and a broad jump of 10-feet-four-inches. Despite having been named the 16th-best player in all of college football in 2020 by Pro Football Focus, Jean-Charles said there were still things he was getting better at, even during the pro day.

“I was working with the 49ers coach, he led the drills for me,” Jean-Charles said. “We talked a little bit before we actually started and he was telling me they just want to see me open up my hips, that was a big question from scouts … (Fluidity) was something I tried to emphasize out there on the field.”

Jean-Charles said it was “crazy” that he was going through the pre-draft process and potentially heading to the NFL.

“I have probably talked to range from 16 to around 20 teams,” Jean-Charles said. “It was a good process, being able to talk to an NFL team. This is something I always dreamed about and just having this opportunity to talk to this many teams is a blessing. At the end of the day, I only need one team to just give me the opportunity, that’s what I’m praying for. At the end of the day, just one team, that’s all you really need. Once I’m in the door it is up to me to handle the rest after that.”