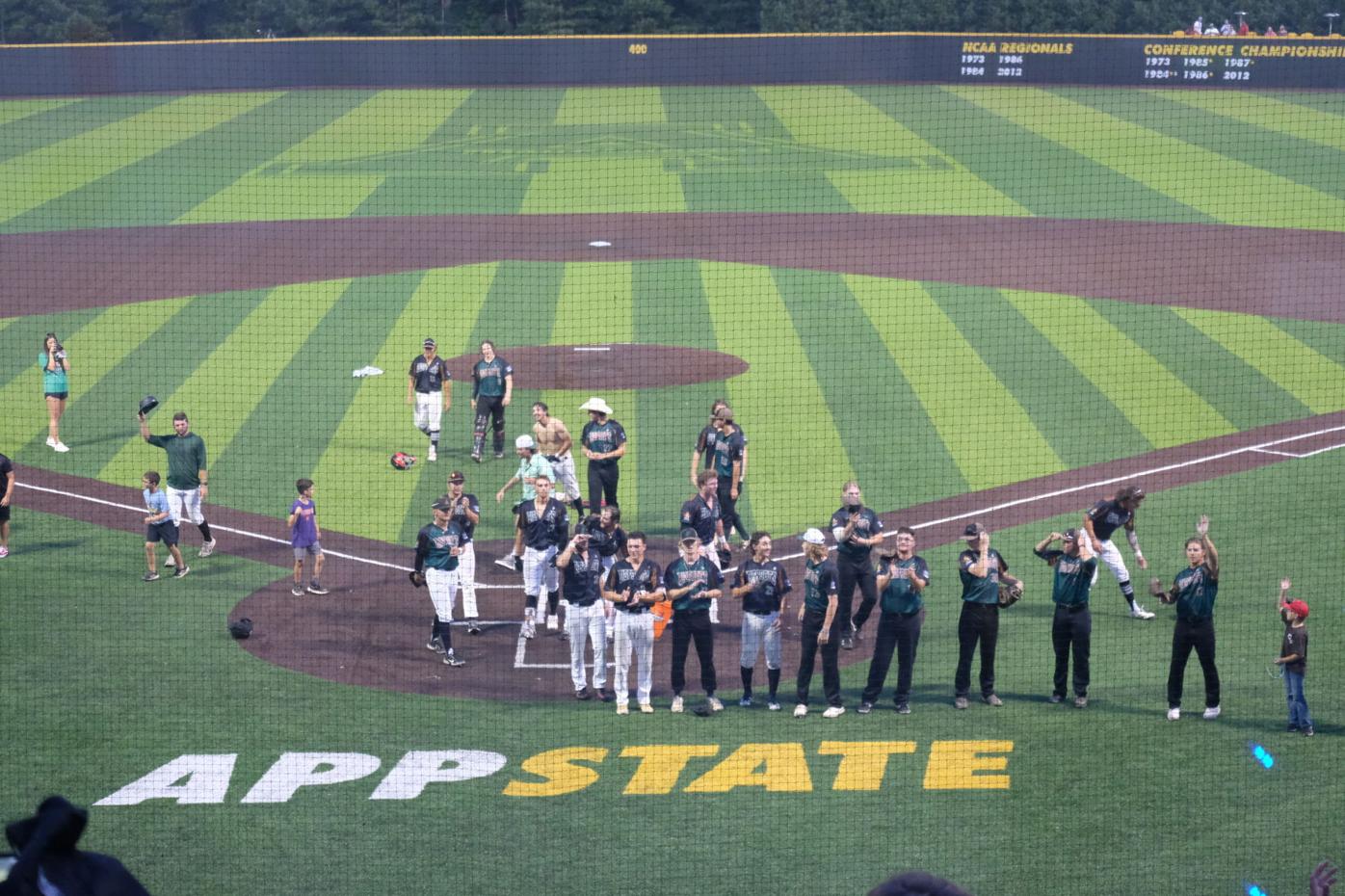 The Bigfoots say goodbye and thank you to the fans after their final game on July 31. 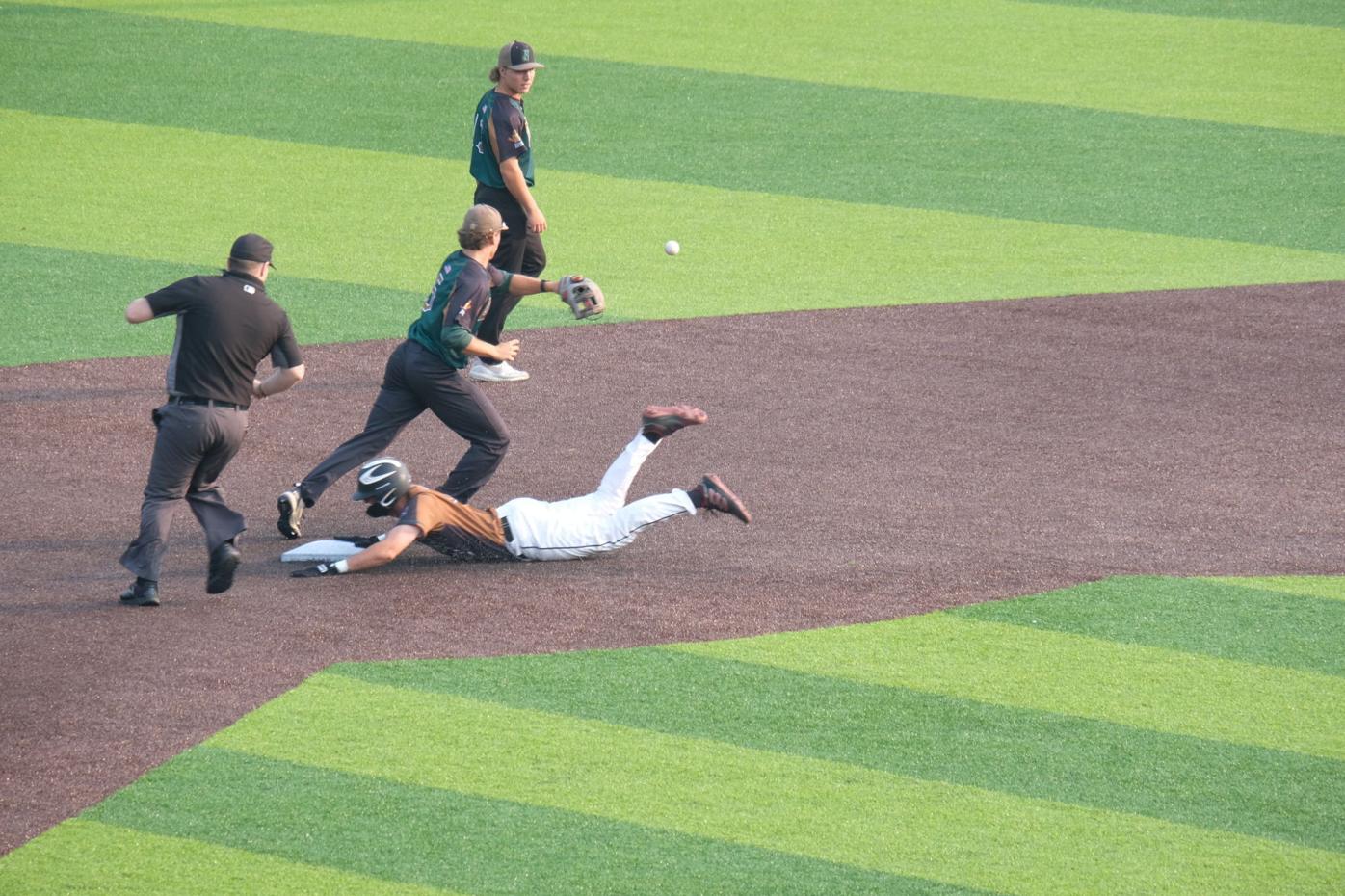 Pitcher Brendan Houghtaling slides into second base in the Bigfoots’ finale on July 31. 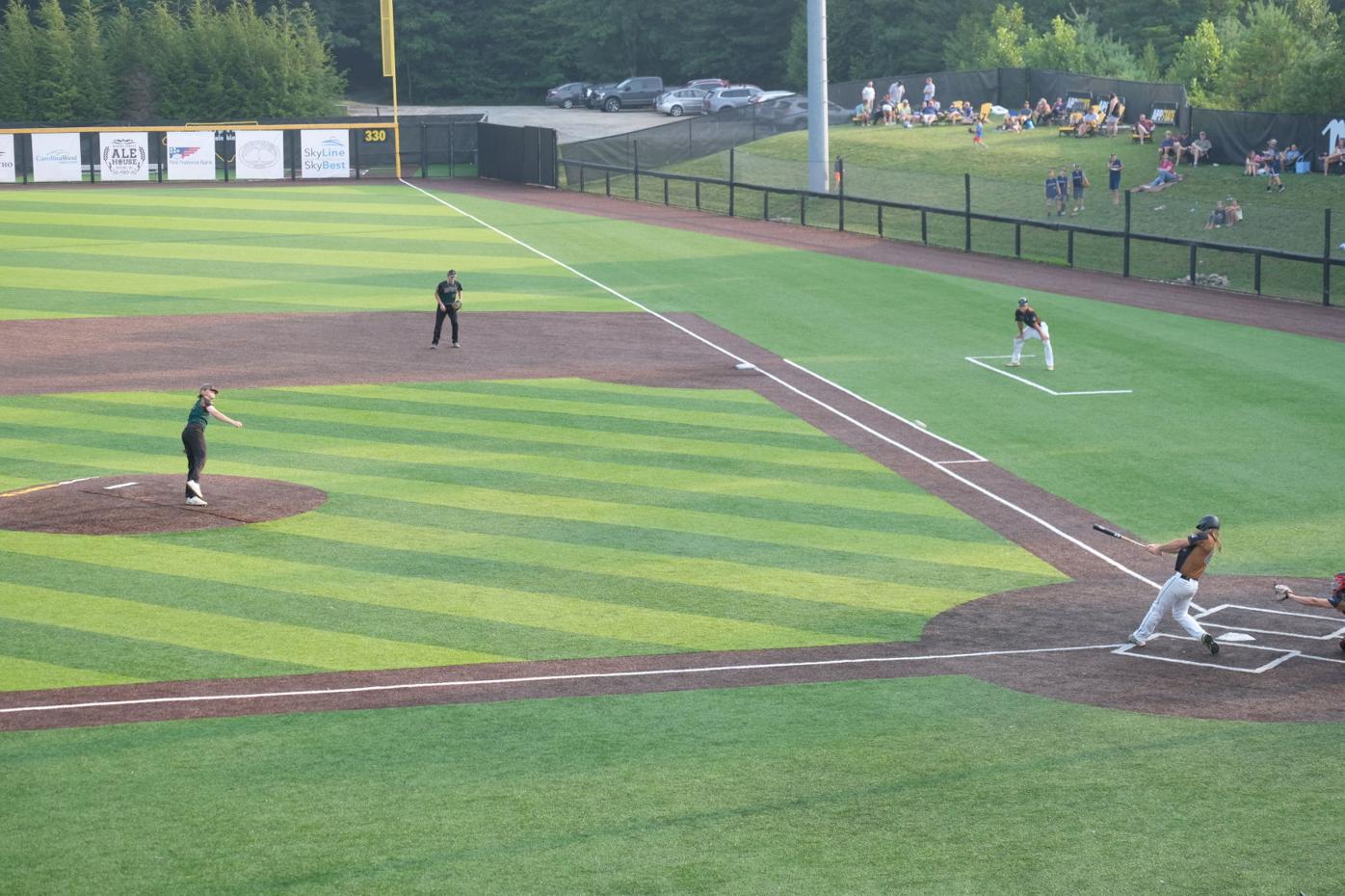 Bigfoots pitcher Noah Fritz smacks a deep fly out against his bullpen partner Caleb Bly in the Bigfoots' intra-squad finale on July 31.

The Bigfoots say goodbye and thank you to the fans after their final game on July 31.

Pitcher Brendan Houghtaling slides into second base in the Bigfoots’ finale on July 31.

Bigfoots pitcher Noah Fritz smacks a deep fly out against his bullpen partner Caleb Bly in the Bigfoots' intra-squad finale on July 31.

BOONE — The Boone Bigfoots ended their season Saturday, July 31, with a bang. After scheduling issues had already cut their season shorter than expected, their opponents for their final game pulled out, leaving the Bigfoots to play themselves in what turned out to be a grand finale.

Before the game could begin, the Bigfoots (26-5) celebrated their Textile League title, with Braden Odom taking home the Player of the Year award and head coach Ryan Smoot winning the Coach of the Year trophy.

In front of the “biggest crowd of the year,” estimated by team owner Bob Wilson, the two teams of ultra-competitive college athletes played for the end-of-season bragging rights.

With Noah Fritz on the mound for Black, the game immediately proved to be an eye-catcher. With two outs and a runner on base, Tyson Bass singled to send Logan West home for a 1-0 lead. Before they could add to their lead, Bass was tagged out by Fritz in a blown steal attempt.

Caleb Bly, the starting arm for Green, fared better than Fritz in his first inning, going through three batters in quick succession.

Neither team found their way to home plate in the second inning, with the game being a tight dual between two halves of the league’s top team.

During the second, Smoot realized how rare the game’s set up was, being solely played by players who knew each other better than any opponent could.

“You spend all season together, guys learned each other’s strengths,” Smoot said. “Guys were positioning themselves against certain hitters, guys were throwing certain pitches, it was really cool.”

However, Green began to pull away in the top of the third.

After David Julian singled, Walter Munday drove him home with a deep double, only to be sent home himself when Tyson Bass bashed a triple for a 3-0 Green lead.

Black needed something to get them going, and they found it in a man they called “Hoot.” Pitcher Brendan Houghtaling was in the batting order for the game, showing up early with an offensive spark of a double. Fritz was also in the order, nearly hitting a home run after Houghtaling’s hit, only for it to be a deep fly out.

A single from Dominic Arienzo sent Houghtaling home to break the scoreless run and make it 3-1. With Arienzo and now Logan Leax on base, Miguel Abascal came up big with a two-RBI double that tied the game.

In the top of the fifth, Green got off to a flying start when a deep shot from Julian bounced off the wall. Going over the outfielders’ heads, the ball stayed deep enough for Julian to scramble for an inside-the-park home run and give Green the 4-3 lead.

Chance Campbell gave Green a second score of the inning with an RBI single, but Black had battled too hard to get swept away that easily.

With two runners on, Abascal again sent in a runner to cut Green’s lead to one. Boone native Hayes Henderson evened the game up when his ground out let Odom fly in to home plate.

In the top of the sixth, Travis Shumate replaced Fritz, but did not have the first inning he hoped for. With a runner on and one out, Munday hit another deep double to send Julian home for a 6-5 lead. Munday would be the next RBI when a double from Bass made it 7-5.

With Tai Lizdas now on the mound for Green, Black was unable to tie the game up again in the bottom of the sixth, and with only seven innings scheduled, they were running out of time.

However, they managed to hold Green scoreless in the top of the seventh, giving them the lifeline they needed for a last-minute comeback.

In the final half-inning, Black loaded the bases on their first three batters with singles from Abascal and David Milam and a walk from Henderson. Pitcher Nolan Leger hit a sacrifice fly that let Abascal get home and cut Green’s lead to 7-6.

After Arienzo walked to load the bases once again, Leax headed to the plate. The at-bat was set up like a sports movie, bases loaded with two outs and Leax facing a full count.

With a crack of the bat, Leax sent the ball over the left fence, a walk-off grand slam to give Black the 10-7 win and put an exclamation point on the Bigfoots’ season.

Reed added the result was never in doubt for him, saying he knew the win was going to happen.

Reed, who now has a perfect record as a skipper, said either Leax or Houghtaling were his picks for the player of the game, with Houghtaling’s consistent at-bats a key part of their win and Leax’s late-game heroics speaking for themselves.

After the thrilling end to the game, the players and staff stayed on the field to thank the fans who had helped make their inaugural season a memorable one, while Queen’s “We are the Champions” played to honor the summer of fun and winning.