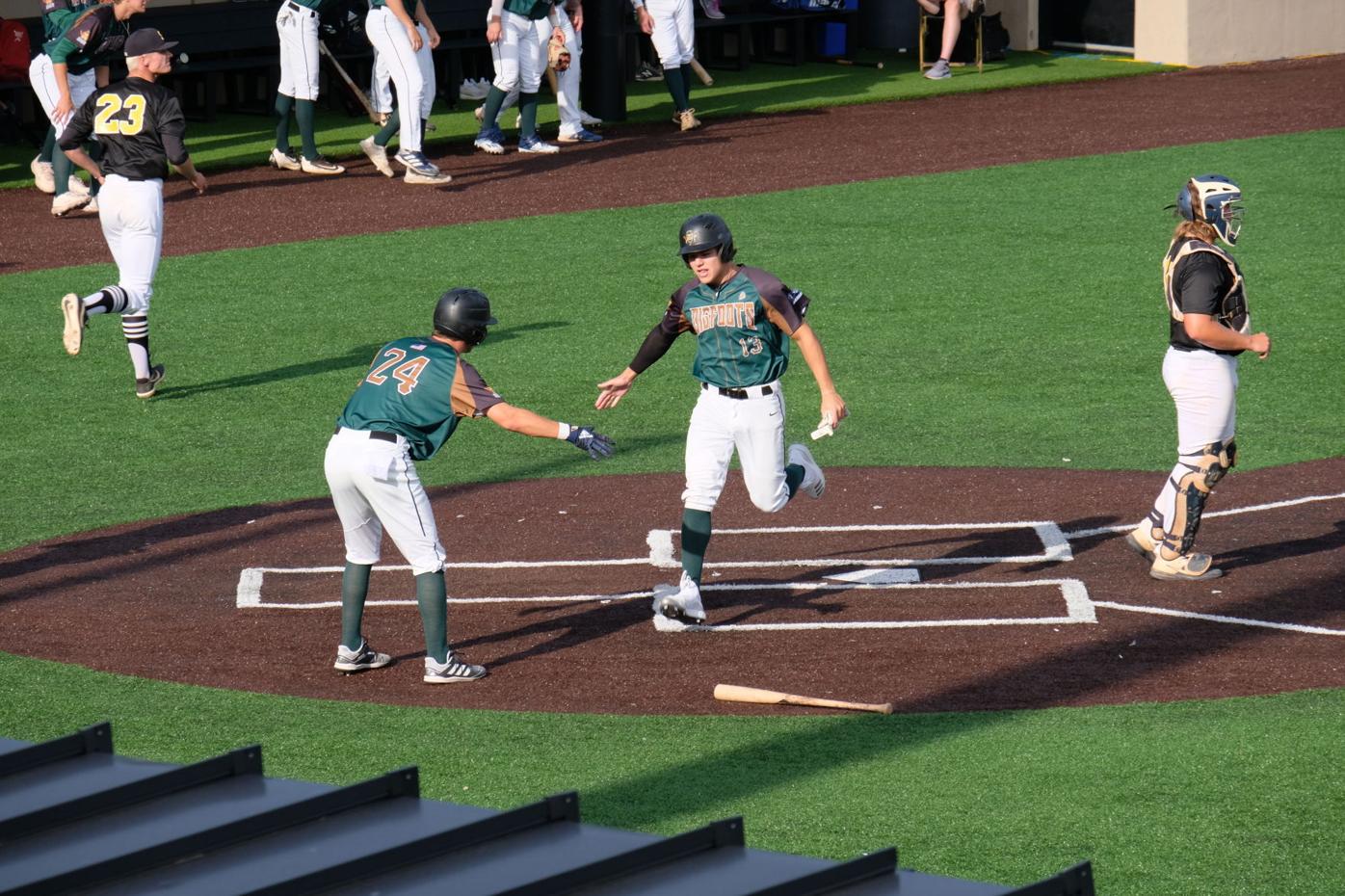 Logan Lex (24) greets David Julian (13) at home plate after they both scored in the Bigfoots’ 11-10 win over the Statesville Owls on Friday, June 4. 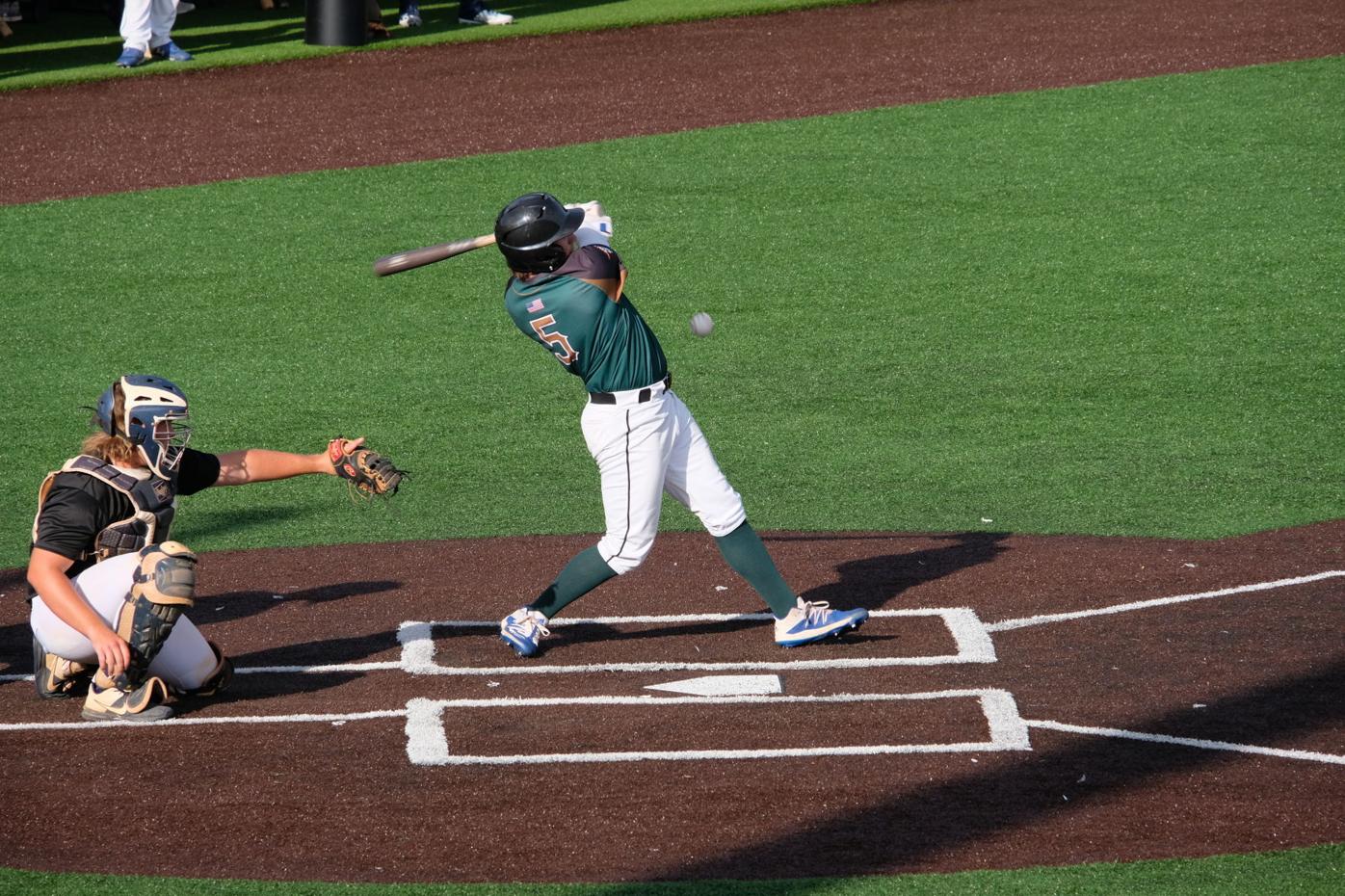 Adam Plouffe (5) fouls off in the Bigfoots’ 11-10 win over the Statesville Owls on June 4. Plouffe would later leave the game with a shoulder injury.

BOONE — History was made Friday, June 4, when the Boone Bigfoots got the first win in the organization’s short history with an 11-10 thriller over the Statesville Owls at home.

The Bigfoots (1-2) and Owls (2-1) faced each other for the third time in the season, all taking place in Boone.

“Obviously, you don’t wanna go too long without getting the first win, especially when you’re a first year organization,” Bigfoots Head Coach Ryan Smoot said. “But, you know, we got most of our guys in here now and they seem to get along. We have really good energy, especially for a summer league game.”

Starting on the mound for the Bigfoots was Matthew Dooley, while Jonathan Todd started for the visitors.

It was Dooley who pitched first, but not for long as he only faced four batters in the top of the first. However, the Bigfoots could not get anything done in their first frame, with the top of their line up all failing to get on base.

It had the makings of a pitchers’ duel early, as Dooley and the Bigfoots’ defense sat down the next three Statesville batters in the top of the second. Todd would be the first to allow a run, when a Justin Reed triple sent home Logan Lex and David Julian for a 2-0 Bigfoots lead.

With runs on the board, Boone held firm and continued to shut out the Owls in the top of the third, but failed to add to their lead in the bottom of the inning.

After being held scoreless in the first three innings, Statesville took advantage of errors from the home team in the top of the fourth to get their offense going. After Dooley walked Kelsy Weems, Owls catcher Scott Metizler got him to third, courtesy of an infield error.

A wild pitch then allowed Weems to run home and make it a 2-1 game, but Statesville could not get the tying run before getting retired.

In the bottom of the fourth, Dawson Salter replaced Todd on the mound, and made a good first impression as he helped hold the Bigfoots scoreless in the fourth.

After another scoreless half-inning from the Owls, the Bigfoots got to work on getting their lead some breathing room. With Steve Ditomaso on second base, Tyson Bass smashed himself a triple to make it 3-1, before being sent home by Lex to make it a three-run lead.

With Travis Shumate replacing Dooley in the sixth, the Bigfoots again held their opponents scoreless. Another pitching change for the Owls, with Jamie Winecoff replacing Salter, led to another Bigfoots score when Adam Plouffe was sent home for a 5-1 lead.

After the Owls failed to change the scoreline in the top of the seventh, the Bigfoots decided they would do it for them, although the Owls may not have enjoyed it. With Bass on third and Lex on second, Miguel Abascal tripled to send them home, before Plouffe got Abascal to home plate to make it an eye-popping 8-1 Boone lead.

However, the wind was taken out of the Bigfoots’ sails while Julian was at the plate. Winecoff went to pick off Plouffe, who gave himself a bit of a lead off of first base, but Plouffe slid to safety. While sliding, Plouffe injured his right shoulder and had to leave the game, being replaced by Walter Munday.

According to Smoot, Plouffe’s shoulder had been dislocated and he was taken to the emergency room for treatment. Smoot said the shoulder was popped back into place and Plouffe will be out for “a little bit.”

In the top of the eighth, the Owls began to rally. Jarrett Henderson took to the mound for the Bigfoots, and within three batters allowed two of them to get on base. Statesville outfielder Rudd Ulrich sent home Ross McCurley, before Weems bashed a homerun to cut the Bigfoots’ lead to 8-5.

After escaping the frame with four runs allowed, the Bigfoots failed to extend their lead as the game went into the ninth. Henderson was replaced by Colin Riddick, who hit Gage Smith with a pitch and then walked Landon Evans.

With only one out and two on, Smoot pulled Riddick for Jasper Dubberly, who quickly struck out Josh Allen to put the Bigfoots within one out of the win. However, it would not go as planned, with McCurley hitting a triple to make it 8-7, before stealing home on a wild pitch to tie it up.

In the bottom of the ninth, the Bigfoots could not seal the win, and the game went to extra innings. In the summer league games, teams begin each half of the inning with a runner on first and second, to try to get to the end faster.

With the Owls at the plate, Cole Robbins was walked to load the bases and Landon Dupert followed it up with a single to take a 9-8 lead. A sacrifice fly from Smith made it a two-run lead, but the Owls could not add to it before being retired.

With the chance to secure the comeback win, the Owls sent out Allen to pitch despite being a shortstop.

With Reed and Julian already on base, Campbell batted lead for the bottom of the tenth, bunting to load the bases. A blooper hit down the line from Ditomaso sent Reed and Julian home to tie the game with two on.

After Bass was walked, again loading the bases, Lex took to the plate. With only one out, he found himself at a full count.

However, it was him not swinging that secured the win. When the umpire called “ball” for the fourth time, it meant a rare walk-off walk was giving the Bigfoots their first win in history.

Smoot said still getting the win despite the rough outings his pitchers had and the comeback momentum from the Owls was a good sign. He said his team showed character and heart by coming through in the end.

“It’s common sense, but winning is better than losing,” Smoot said. “I do think it is important, with us being new, that we do try to get some wins under our belt. It’s a good sign that our pitchers responded and our hitters were still engaged enough to put together some good at-bats to have a chance to walk it off.”

The bigfoots return only 24 hours later, with a match-up against the High Point Locos on Saturday, June 5.