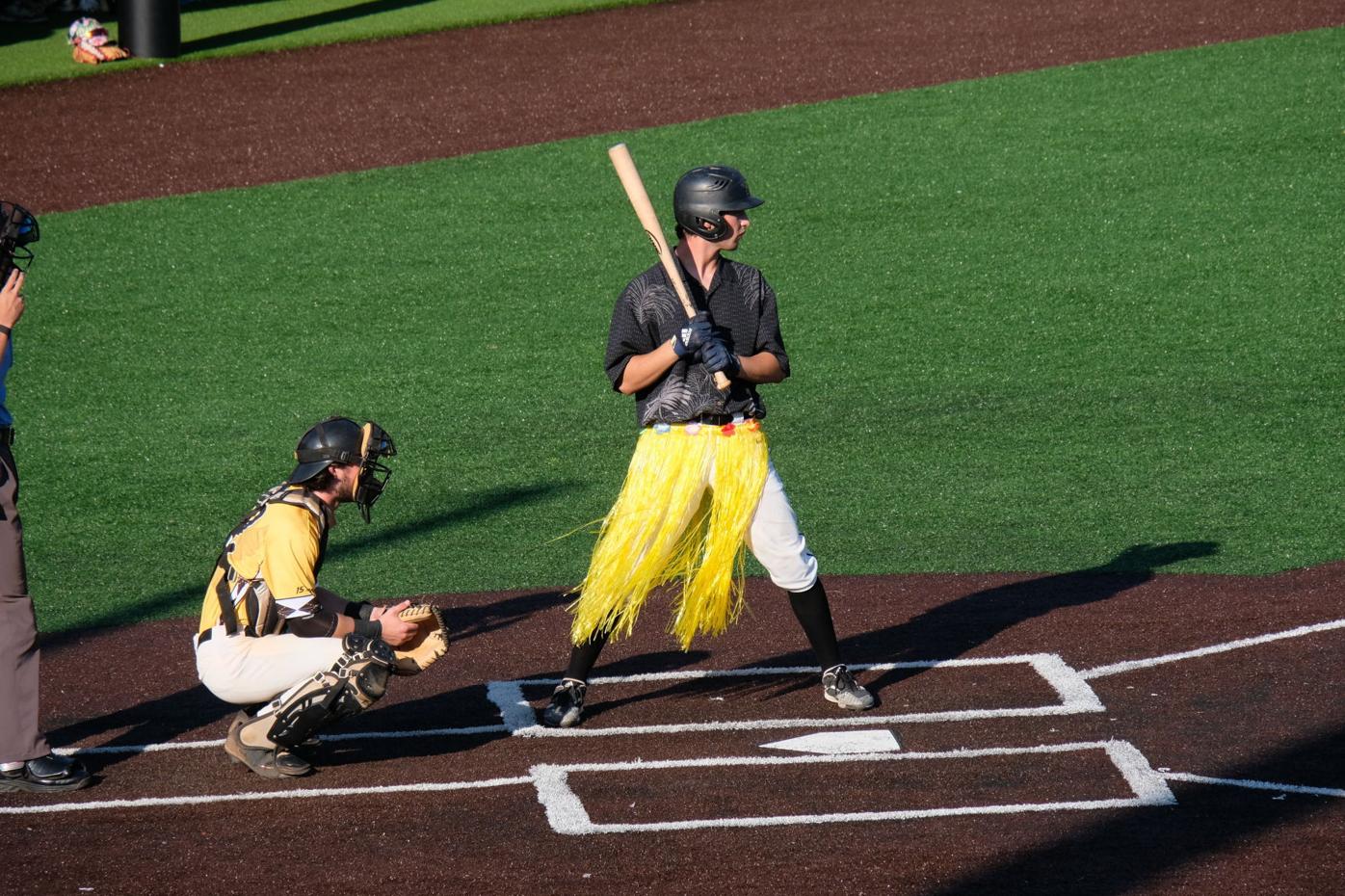 Logan Leax took full advantage of the fun of summer league baseball at Hawaiian Night, rocking a hula skirt at the plate. 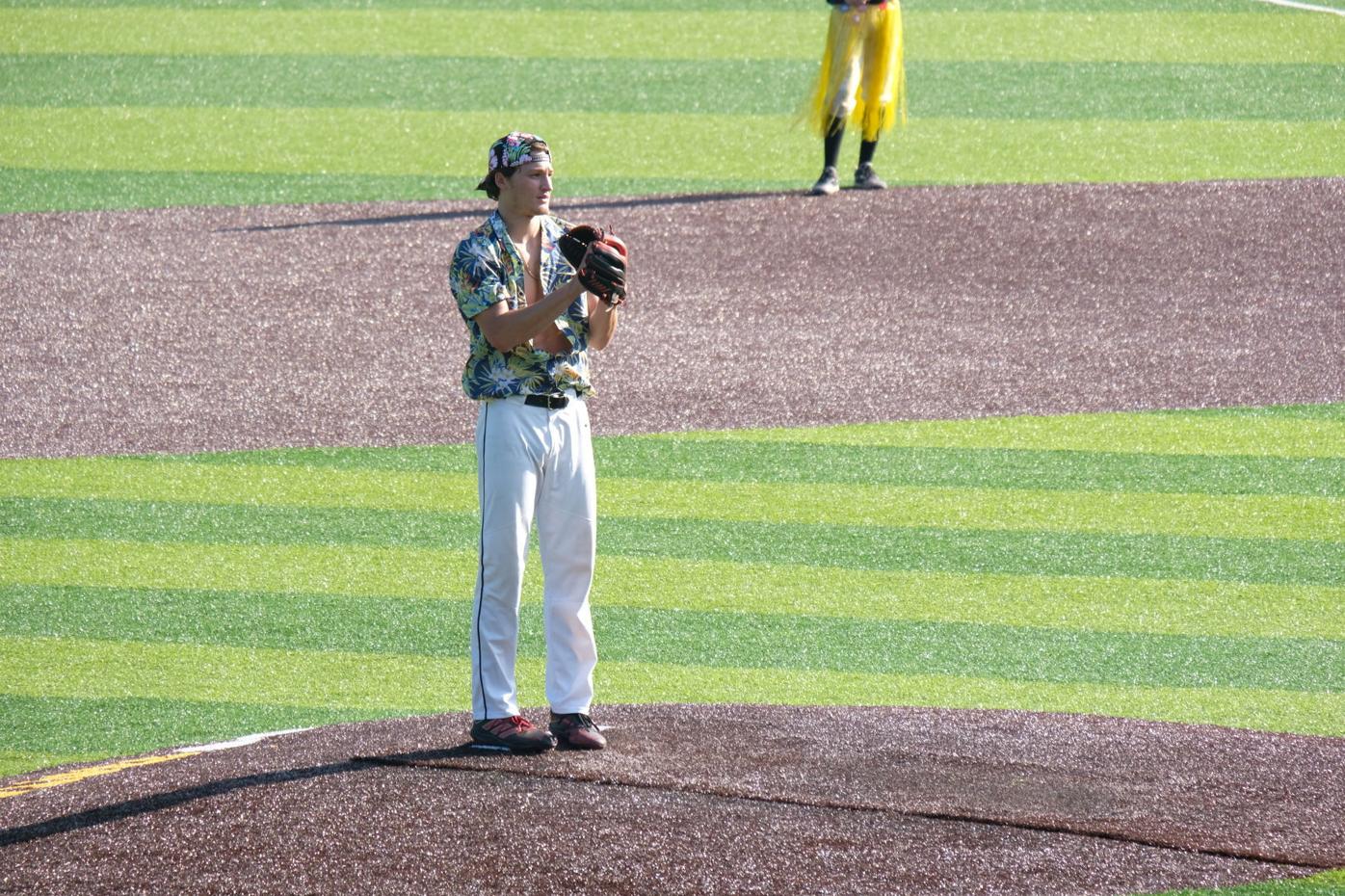 Zack Potts had a dominant performance on the mound for the Bigfoots on July 16 against the Statesville Owls, open Hawaiian shirt and all. 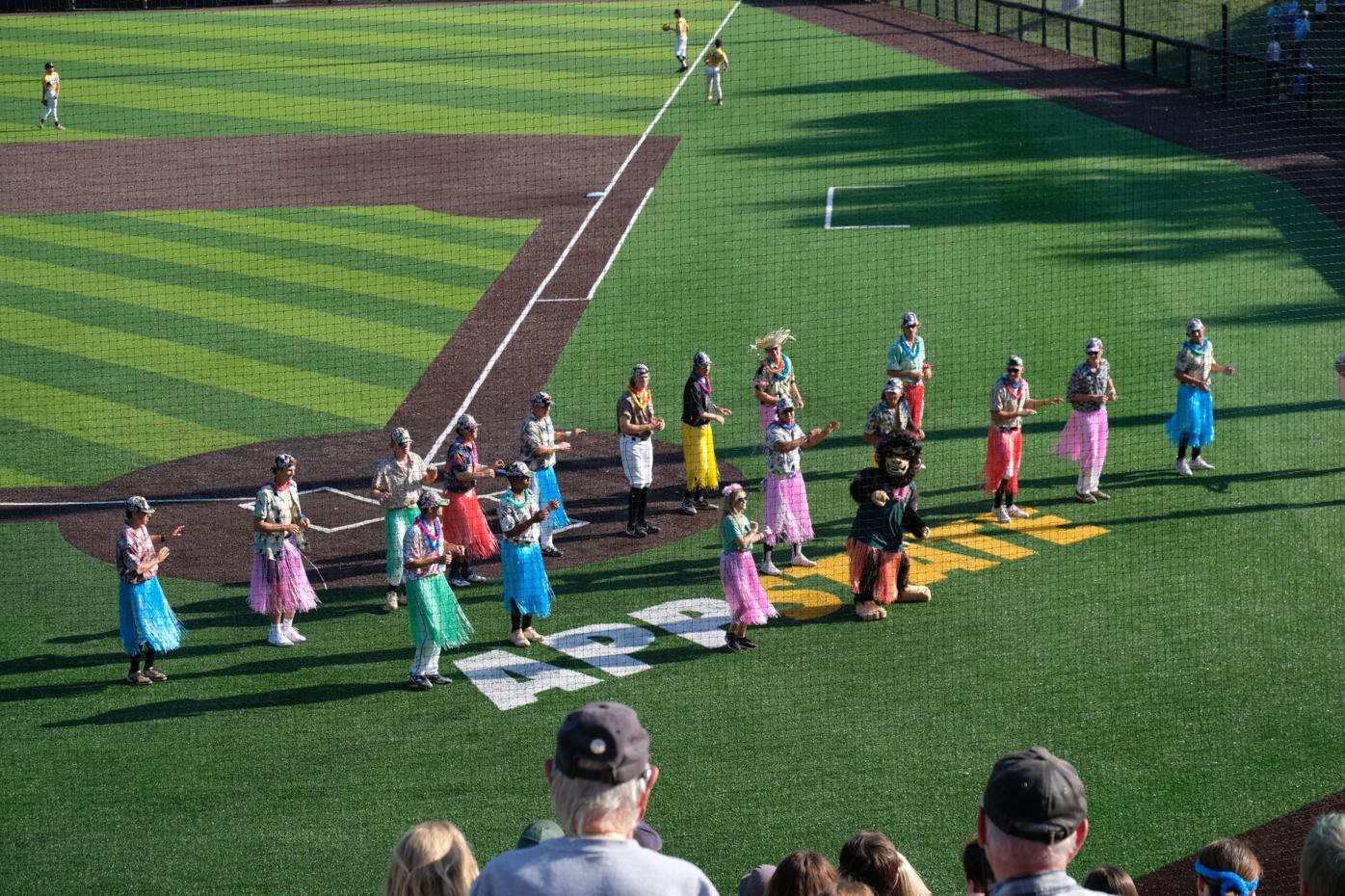 The Boone Bigfoots showed off their unique look for Hawaiian Night on July 16.

Logan Leax took full advantage of the fun of summer league baseball at Hawaiian Night, rocking a hula skirt at the plate.

Zack Potts had a dominant performance on the mound for the Bigfoots on July 16 against the Statesville Owls, open Hawaiian shirt and all.

The Boone Bigfoots showed off their unique look for Hawaiian Night on July 16.

BOONE — With loud shirts, hula skirts and a packed house on their side, the Boone Bigfoots won 7-0 against the rival Statesville Owls at home on Hawaiian Night.

Not only a baseball game, Hawaiian night for the Bigfoots (19-5) meant special, Hawaiian-print jerseys and hats, along with a few players wearing hula skirts while playing.

The Bigfoots came into the game on the heels of a 13-2 road win over the Greensboro Monarchs the day prior.

But before the game could begin, another contest took center stage. Behind home plate, a corn hole game between two players from each team was set up, with the winner getting an extra run to start the game.

Representing the home team were Hayes Henderson and Braden Odom, and the Owls (11-8) quickly discovered they were outmatched. Henderson turned out to be a ringer, scoring 18 of the Bigfoots’ 21 points, taking the first win of the night and giving his team an extra run to start the game with.

“I’m glad (the Owls) agreed to that,” Boone head coach Ryan Smoot said. “They didn’t know we had Hayes Henderson on our team and he’s a real ringer. I’m not sure how much Braden contributed to that … He held their guy to nothing, so I guess he did his job.”

Early in the game, it appeared that the one run might be the only thing separating the two teams. Starting on the mound for the Bigfoots was Zack Potts, while Jeriah Henry started for the Owls and neither saw a fourth batter through the first two innings.

It took until the bottom of the third for either team to score a run, with the Foots the first to strike.

Singles from Justin Reed and Logan West set up a potential second run, with Reed on third thanks to a steal. David Julian did just what was needed, another single, to get Reed to home plate for a 2-0 lead.

Next to the plate was Logan Leax, yellow hula skirt and all, who made the play of the night. A deep hit to right field was misjudged by the fielder, who slid and let the ball bounce over his head. West and Julian made it home, but Leax kept looking for more as he sprinted around the bases for an inside the park home run and a 5-0 lead.

After going from a tight pitchers’ duel to a potential blowout, the bats went quiet again until the sixth inning.

Henry took the four runs in stride as he went back to being one of the most feared pitchers in the Textile League. Meanwhile, Potts was also staying hot, holding the Owls scoreless through his five innings on the mound.

“Obviously, Potts pitched really, really well, and so did Jeriah,” Smoot said. “We took advantage of their mistakes defensively and that was all we needed.”

In the bottom of the sixth, now batting against Ross Pearn, the Bigfoots added to their lead on what could have been deemed an error from the Owls. With Miguel Abascal on third, catcher David Milam bunted for an RBI, but still made it to first base safely, only to be caught stealing second to end the inning.

Replacing Potts in the top of the sixth was Brendan Houghtaling, who struck out five of his nine batters in two innings to continue the Owls’ futility at the plate.

Meanwhile, the Bigfoots had one more run to tack on, with another getting controversially waived off. In the bottom of the eighth, Odom opened the frame with a triple, before Bass was walked for a second baserunner.

Abascal was also walked to load the bases, but a sacrifice fly from Justin Reed only got one runner home to make it 7-0. Next to the plate was Milam, but he never got the chance to add to the lead.

A bad throw from the catcher to third let Bass steal home, only for Abascal to get caught at third to end the inning. However, the umpire waived off Bass’s run, much to the vocal displeasure of the crowd and team staff.

Houghtaling was replaced in the top of the eighth by Tai Lizdas, who held on for the shutout and the team’s 13th-straight league play win.

The game was the seventh of ten meetings between the Owls and the Bigfoots. With the win, the Bigfoots lead the season series 5-2, with a chance to clinch it on the road on Friday, July 23.

But before then, the Bigfoots were to face off against the High Point Locos on Saturday, July 17.