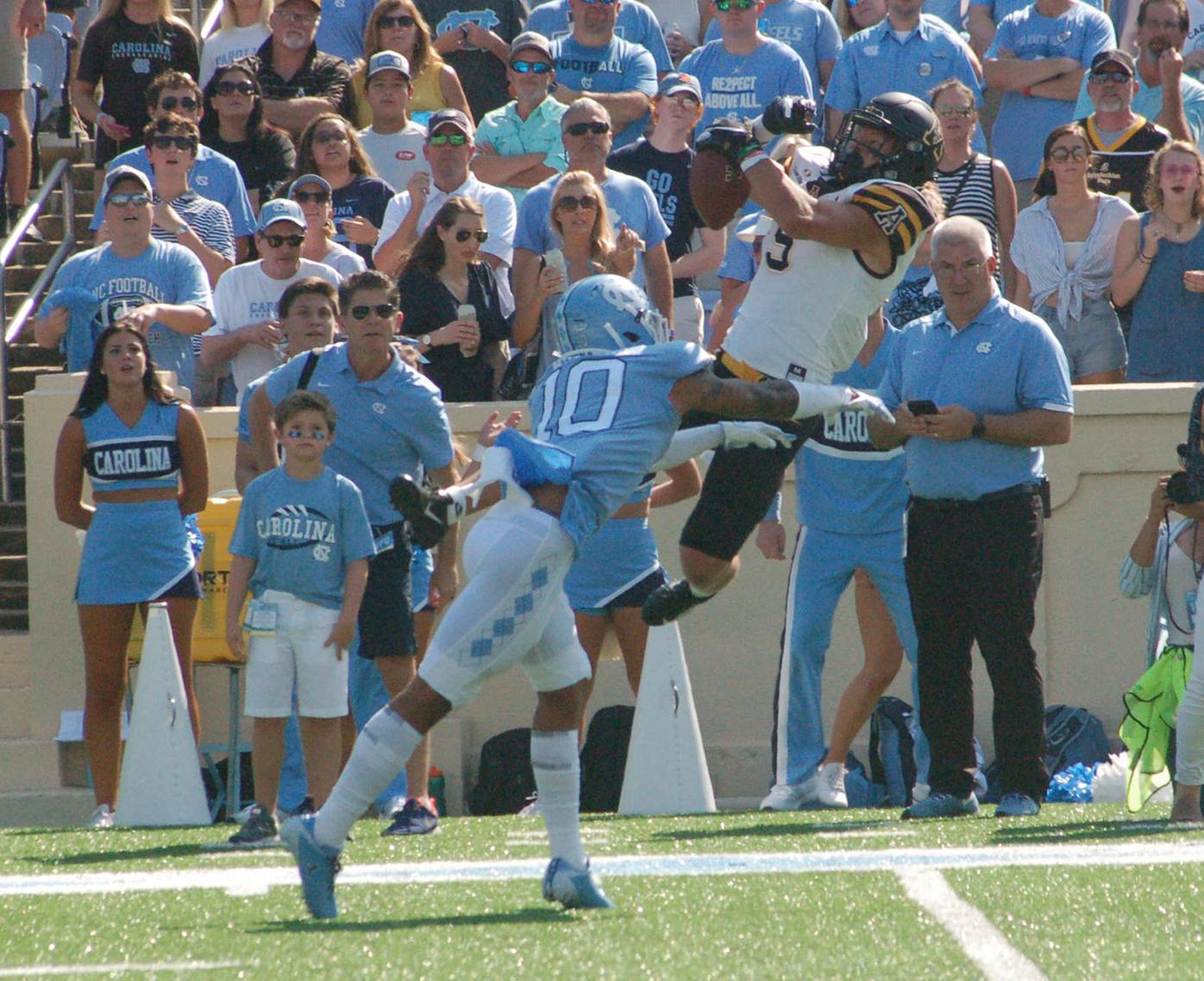 App State receiver Thomas Hennigan goes up for a catch against North Carolina. 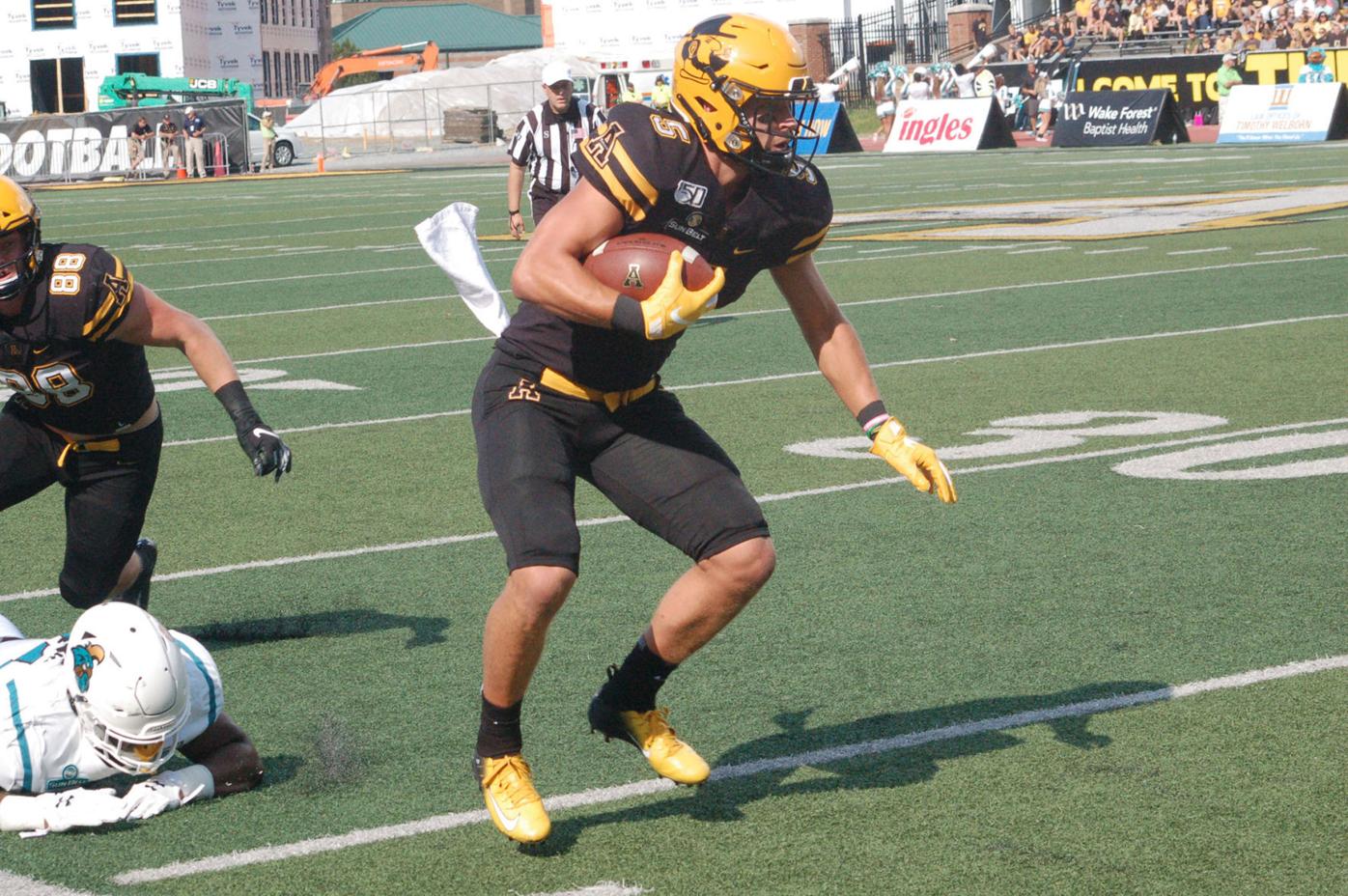 App State receiver Thomas Hennigan goes up for a catch against North Carolina.

BOONE — It would be safe to argue that Appalachian State receiver Thomas Hennigan is as old school as a junior playing college football could come.

Does Hennigan have any fears of going inside and taking a hit? Don’t worry about it. At 6-foot-2, 210-pounds, Hennigan has the sizes to take most hits and if necessary, deliver one or two of his own.

Does he object to blocking downfield? Again, not a problem. Hennigan felt from the beginning of his collegiate career that if he didn’t block, he wouldn’t get on the field.

What about returning punts? Generally, one of the hardest chores for a skill position player to do, but one that Hennigan takes in stride.

Taste in music? Definitely old-school with Bruce Springsteen, Bob Seeger and The Beatles at the top of his play lists. He also liked the movies “Bohemian Rhapsody” and “Rocketman,” the life story of Elton John. Hennigan also listed soccer and golf as his favorite sports, which he admits others find “a little weird.”

“I love that they’re making movies of all the old-time musicians,” he said. “Elton John, ‘Bohemian Rhapsody’ — those movies were really good.”

Hennigan has evolved into a pretty good receiver at Appalachian State. After starting in every game since arriving in Boone since 2017 — that’s 32 games going into the Mountaineers’ game at South Alabama on Oct. 26 — Hennigan has turned into quarterback Zac Thomas’ favorite targets for the 2019 season.

His 27 catches, 316 yards and three touchdowns leads the App State receivers, but he also knows that the Mountaineers are deep in the position. Malik Williams has 26 receptions for 312 yards, both second on the team.

Jalen Virgil has eight catches, with three having gone for touchdowns, and Corey Sutton averages 66.8 yards per game. Hennigan doesn’t necessarily care who the ball is thrown to and who scores the touchdown, as long as the touchdown is scored.

Appalachian State’s offense employs a balanced attack that has gained 1,396 yards rushing and 1,236 passing yards under the guidance of head coach and offensive coordinator Eliah Drinkwitz. When it comes to the offense, the cliché share and share alike works for Hennigan.

“Coach Drink talks about how we have to have an unselfish pass game,” Hennigan said. “I think we really gotten that through our heads. It’s not just one guy. We’ve got a very talented room and to be the offense that we want to be, we’re going to have to spread (the ball) around. That means handing off and getting Darrynton (Evans) his touches because he’s a really good running back.”

“If it’s a deep ball, if it’s a screen or if it’s a slant and I’m about to get my head beat in, I’ll go and catch it because it’s an opportunity to make a play,” Hennigan said. “Any ball that is thrown to me, I’ll take ’em.”

Hennigan knows that football is an aggressive game and knows that slant passes, especially down the middle, leaves him vulnerable to being hit hard. Rule changes that prohibit linebackers and defensive backs from hitting receivers with crown of their helmets, known as targeting, have made life safer in the middle of the field.

But Hennigan also knows, and accepts, that the big hit is coming when he goes to catch a pass over the middle. So, Hennigan figures that he might as well catch the ball anyway since the hit is coming. He has never felt he should pull up from a pass because of an impending hit, but also knows how to protect himself.

“My dad always told me that you’re going to get hit anyway, so you might as well catch it,” Hennigan said. “That’s always been in my mind every since I started playing the position. That’s as simple as it gets to playing receiver.”

Being a receiver with the Mountaineers also means blocking downfield. Hennigan is not expected to be an offensive guard taking on cornerbacks and safeties with his blocking, but he’s expected to make enough contact to keep his man away from the running backs.

Hennigan said he learned the importance of blocking when he got to Appalachian State. Hennigan credited former receivers coach Justin Watts for stressing the need of blocking to Hennigan.

“When I got here my freshman year I realized that Jalin Moore was the running back and Darrynton was right behind him. I knew the Satterfield offense was 60 percent or more of a run offense,” Hennigan said. “I got a lot of reps at blocking and playing as a true freshman, I wasn’t going to be on the field if I didn’t block.”

Hennigan found another way to get on the field. He is often used to return punts, and returned one for a 59-yard touchdown in App State’s 45-9 win over Charlotte in 2018.

“A lot of people say they wouldn’t want to do that, but I really don’t mind it,” he said. “I enjoy it. It’s a big responsibility just in protecting the ball and making sure we give it back to the offense, but as far as taking the hit, it’s like playing receiver. You’re going to get hit, but you have to have faith in the guys who are blocking for you that they’ll take the first hit off of you.”

Hennigan, a marketing major, has one more year at Appalachian State before facing the world outside of college. Thoughts of playing professional football has crossed his mind, but he’s focused on helping the Mountaineers win the Sun Belt Conference and possibly finishing the season 14-0, including winning the Sun Belt Championship game and a bowl game.

He’s also bought into the concept of finishing each individual game with a 1-0 record each week, not celebrating each win too much and not looking past the team’s upcoming game.

Hennigan also said the Mountaineers have not talked much about being ranked No. 21 in the two major polls. He said there is some “been there, done that” with the team since the Mountaineers were ranked for a week in 2018.

“Last year was the first time we ever really had it, but as a team we really don’t talk about it,” Hennigan said. “We expect it to be that now. We’re capable of it, so we’re taking it one week at a time and everybody’s bought into the 1-0 mentality.”

Hennigan and the Mountaineers try to be 1-0 in their game Oct. 31 at home against rival Georgia Southern.