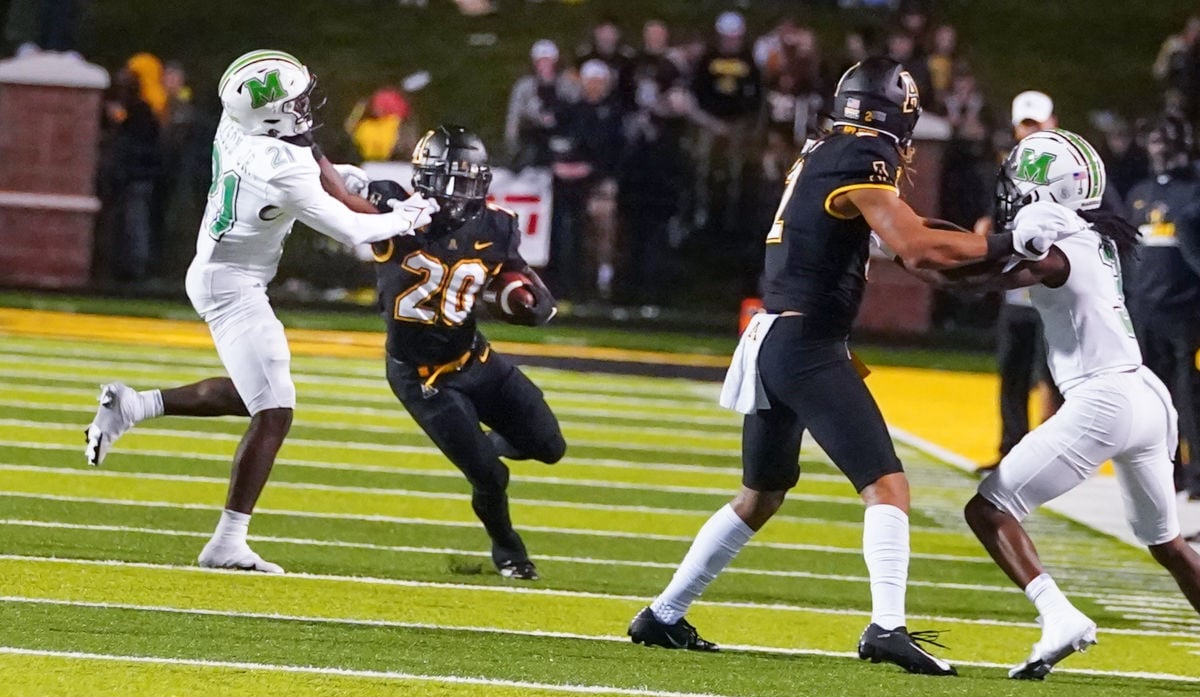 Although the Marshall defender did not get flagged for grabbing Nate Noel’s (20) face mask, the App State running back still turned the corner for a first down gain in the 4th quarter on Sept. 23. The Mountaineers won, 31-30. 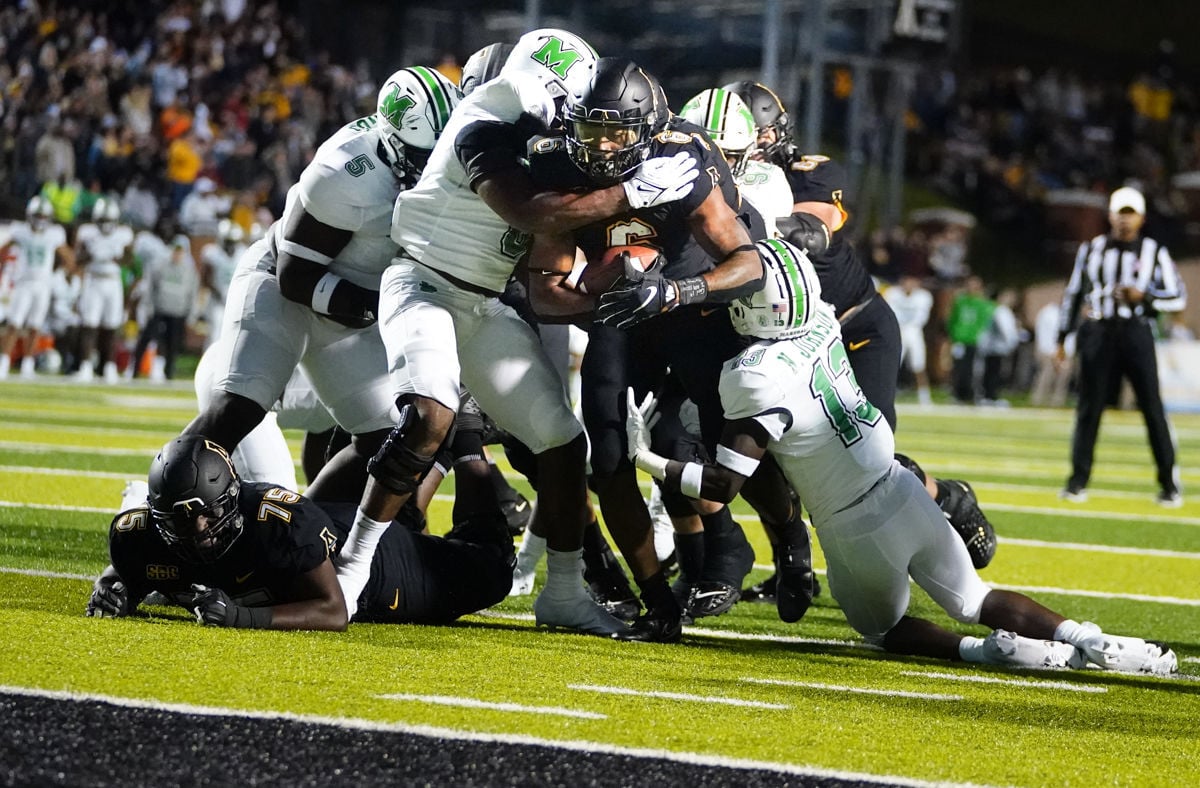 Camerun Peoples (6) gets the ball close to the end zone in the first half in App State’s nonconference football game vs. Marshall at Kidd Brewer Stadium on Sept. 23. 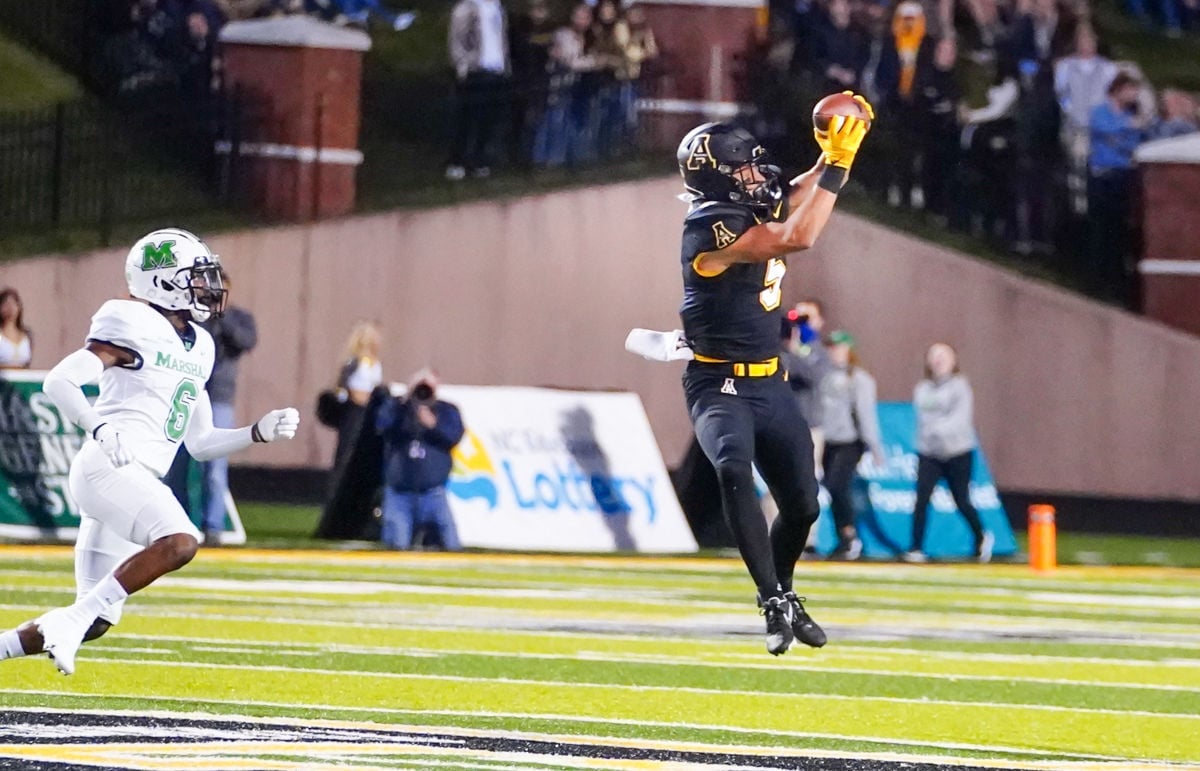 App State super senior wide receiver Thomas Hennigan brings down a Chase Brice pass in the first half vs. Marshall on Sept. 23

Corey Sutton (2) waits on a pass from Chase Brice (far left), with the ball in midair on Sept. 13, in the 4th quarter of Appalachian State’s 31-30 win over Marshall at Kidd Brewer Stadium. 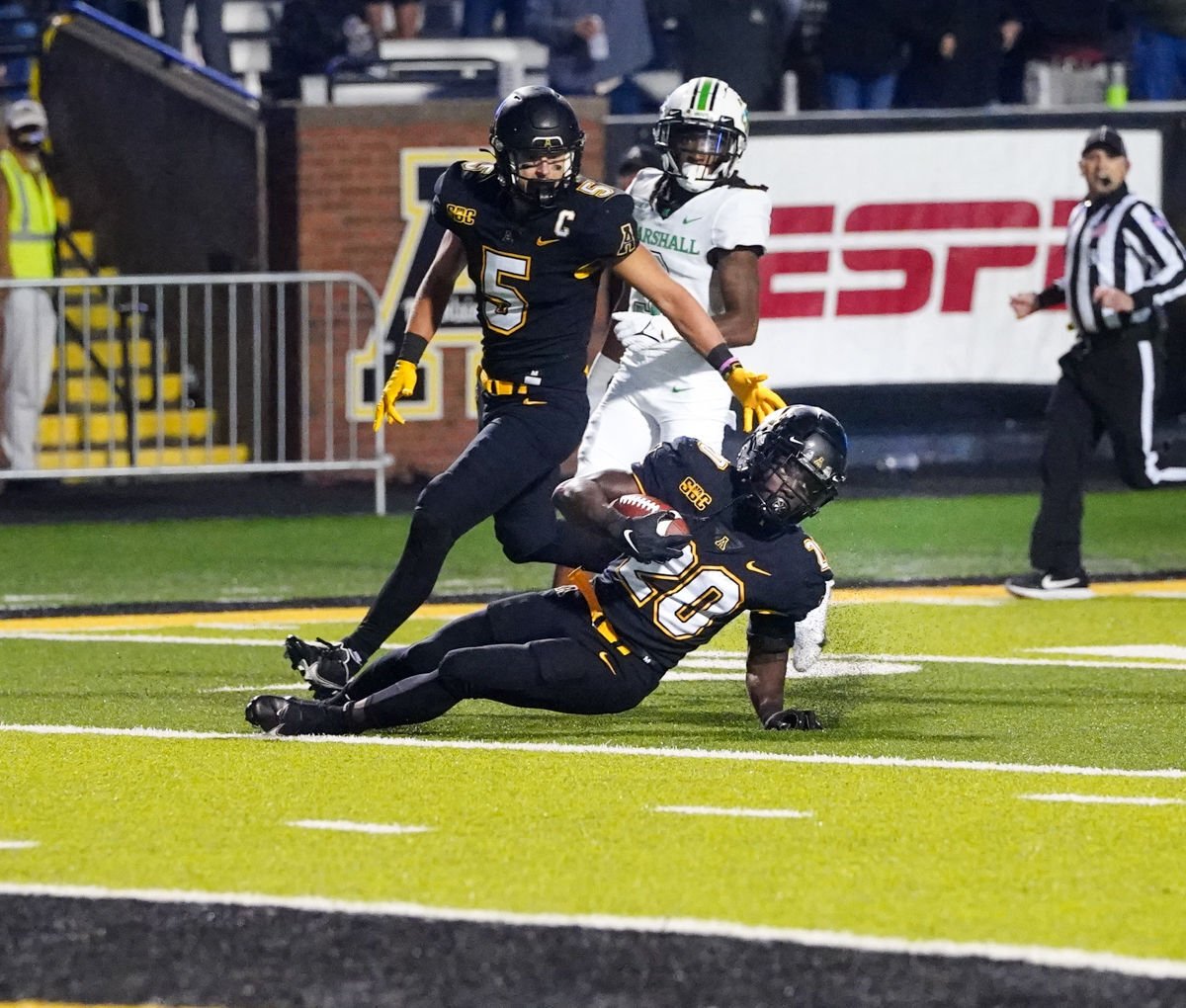 Nate Noel (20) goes down on his own short of the goal line with barely a minute left on the clock with App State in the lead, 31-30, over Marshall on Sept. 23, at Kidd Brewer Stadium. 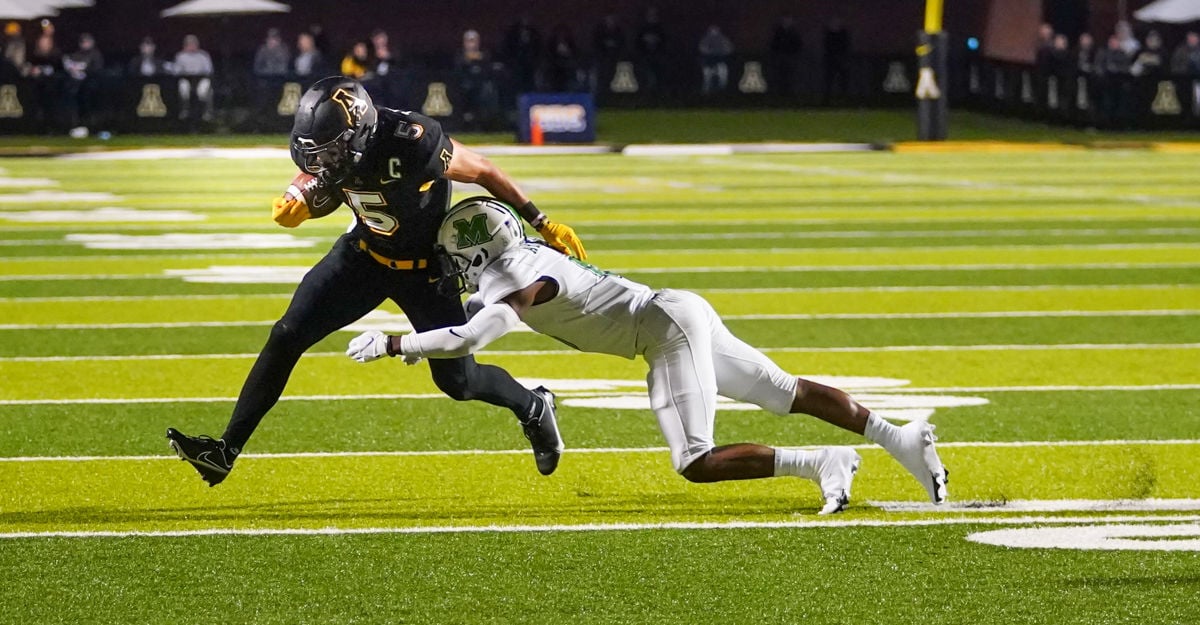 For a weekday night game, it was a large crowd on hand at Kidd Brewer Stadium, Sept. 23, for Appalachian State’s nationally televised (ESPN) rematch with Marshall.

Although the Marshall defender did not get flagged for grabbing Nate Noel’s (20) face mask, the App State running back still turned the corner for a first down gain in the 4th quarter on Sept. 23. The Mountaineers won, 31-30.

App State super senior wide receiver Thomas Hennigan brings down a Chase Brice pass in the first half vs. Marshall on Sept. 23

Corey Sutton (2) waits on a pass from Chase Brice (far left), with the ball in midair on Sept. 13, in the 4th quarter of Appalachian State’s 31-30 win over Marshall at Kidd Brewer Stadium.

For a weekday night game, it was a large crowd on hand at Kidd Brewer Stadium, Sept. 23, for Appalachian State’s nationally televised (ESPN) rematch with Marshall.

BOONE — Under the primetime lights of a Thursday night, Appalachian State football had their "reckoning" over Marshall with a 31-30 win.

“People ask me all the time, ‘Is this a revenge game?’ and it wasn't a revenge game. It was a reckoning game,” Mountaineers head coach Shawn Clark said. “Revenge is emotional, reckoning is something you have to put to bed. We came out and put all the talk to bed and we’re the better football team tonight.”

The old rivals were only a year removed from a game in Huntington, W.V., where Marshall held on to a 17-7 win. Heading into the 2021 game, it had been 26 years since App recorded a win against the Herd. Despite leading the all-time series 14-9, App State had lost the last three meetings stretching back to 1995.

The rivalry was on display as early as 25 minutes before kickoff. Right after the App players headed back into the locker room, the sound of the crowd shifted to a chorus of boos aimed at the Herd. The rivalry may have returned for the first time last year, but it was back in full force the night of Sept. 23.

The Herd came out flat on their first drive — failing to pick up a yard — while the Mountaineers came out looking to send a message. All 80 of their yards came from either wideout Thomas Hennigan or running back Camerun Peoples.

On the ground, the Mountaineers were tough, not shying away from contact as they tried to break Marshall. Peoples capped the drive with a true, ground-and-pound style touchdown run from a yard out.

Marshall was not going down this early, quickly picking up the first down that eluded them on the opening drive. The Herd did most of their damage through Willie Johnson, who hauled in a 41-yard catch and run from Grant Wells to get down to the redzone.

App’s defense may have bent, but it did not break, holding the Herd to a 21-yard field goal from Shane Ciucci.

When the Mountaineers tried to stretch their lead, they found a Herd defense that was keying in on Peoples, not letting the bullying back out-man the Marshall defenders.

While their defense figured out what to do, Marshall’s offense also seemed to pick things up. Wells led the Herd down the field by carving up the App defense. After getting to the redzone, the Mountaineers were finally able to stem the bleeding and held the Herd to another field goal.

After dragging their deficit 7-6, the Herd kept pushing. Another Marshall stop on defense gave the offense a chance at a lead — which they took when Wells hit Xavier Gaines over the middle. Gaines shrugged off one Mountaineer defender, turned upfield and left the defense in the dust for a 56-yard touchdown.

The Mountaineers now found themselves 13-7 and in need of a spark. It came in a tactical shift. App put more of the focus on passing, and quarterback Chase Brice delivered. Finding players like Hennigan and Corey Sutton, Brice steered the Mountaineers down the field before Peoples bagged his second touchdown of the day to take a 14-13 lead.

The crowd was ecstatic and the black and gold were back in charge. Only, the Herd's Rasheen Ali had other plans. The redshirt freshman caught the kickoff at his own 3-yard line and took off, blowing by the Mountaineers and taking Marshall with him en route to a 97-yard touchdown return to make it 20-14

The Mountaineers had one last chance to take back the lead with just under two minutes remaining in the first half.

Again, mixing up their offense, the Mountaineers charged their way down the field. Helping them out were the third and fourth pass interference calls against Marshall. With seconds left in the half, Peoples got the call and delivered his third rushing score of the game as App led 21-20 heading into halftime.

Receiving the opening kickoff for the second half, App looked to build on their slim lead. All was going well until Brice tried to go deep to Sutton, which was picked off by Micah Abraham. It was Brice’s first real hiccup of the night, and it was a big one.

Marshall got the ball back and wasted no time by getting the ball close enough for a 46-yard field goal from Shane Ciucci, taking back the lead 23-21.

In the first couple of plays when App State got the ball back, it appeared that they could be within a play of getting back on track. Instead, Peoples took some of his shine off of his spectacular day by fumbling the ball and giving Marshall a chance to extend their lead.

The Herd only needed four plays after Peoples’ fumble to get back in the endzone with Ali taking it in from eight yards out.

App State was now down by nine and their offense was stalling. They needed something to spark it to life. That spark was Sutton, who pulled in a 37-yard bomb from Brice to start the fourth quarter before getting a foot down to snag a 24-yard touchdown.

Marshall saw their lead cut down to two points, and immediately started to work their way down the field to try and build it back up. Ultimately, the App defense held firm in the redzone, sending Ciucci back onto the field. Instead of making it 33-28, Ciucci’s 32-yard attempt sailed to the right of the goal posts and App State had a chance.

Taking over from their own 20-yard line, App started driving. Brice accounted for 36 yards through the air or on the ground, but the Mountaineers stalled out at the Marshall 26. Chandler Staton was sent out and kept his kick between the uprights for a 45-yard field goal.

After hitting what turned out to be a game-winner, Staton said he held back in celebrating, not wanting to get ahead of himself.

“Right after I hit the field goal, I was like, ‘just another field goal,’ because we hadn’t won the game yet,” Staton said. “I was kind of skeptical about celebrating it as a game winner.”

The Mountaineers had snatched back a lead, even if it was only one point, but they were going to hold onto it as hard as they could.

Marshall got the ball with just under six minutes remaining, but could only go 17 yards before having to punt it away.

App had a simple mission to burn through four minutes of clock and hey had the perfect man for the job in Nate Noel, who picked up first down after first down. He racked up 87 yards on the final drive alone. Noel had the chance to glide into the endzone at the end, but opted to slide at the 6-yard line to seal the 31-30 win.

Noel said that the team had practiced for the situation, and he knew he could not give Marshall another chance to have the ball.

After the game, Clark said the matchup with Marshall was special to both schools and college football as a whole.

“It's the first time in 26 years we play them here in Boone, it’s a Thursday night and we have 28,000 fans here,” Clark said. “We should play those guys every single year. It is great for college football, it’s great for our community and it’s great for Huntington, West Virginia.”

The game was App State's final non-conference matchup, with the Mountaineers slated to face Georgia State (1-2) for their first Sun Belt Conference game on the road on Oct. 2.

The way the ASU fans heckled Marshall as they were leaving the field was absolutely embarrassing. This is a disgusting behavior and ruins Boone.

Made worse by the fact that Athletics looses $25 million every single year and is financially supported on the backs of students who are forced to pay over $1000/year in student fees to subsidize these financial losses.