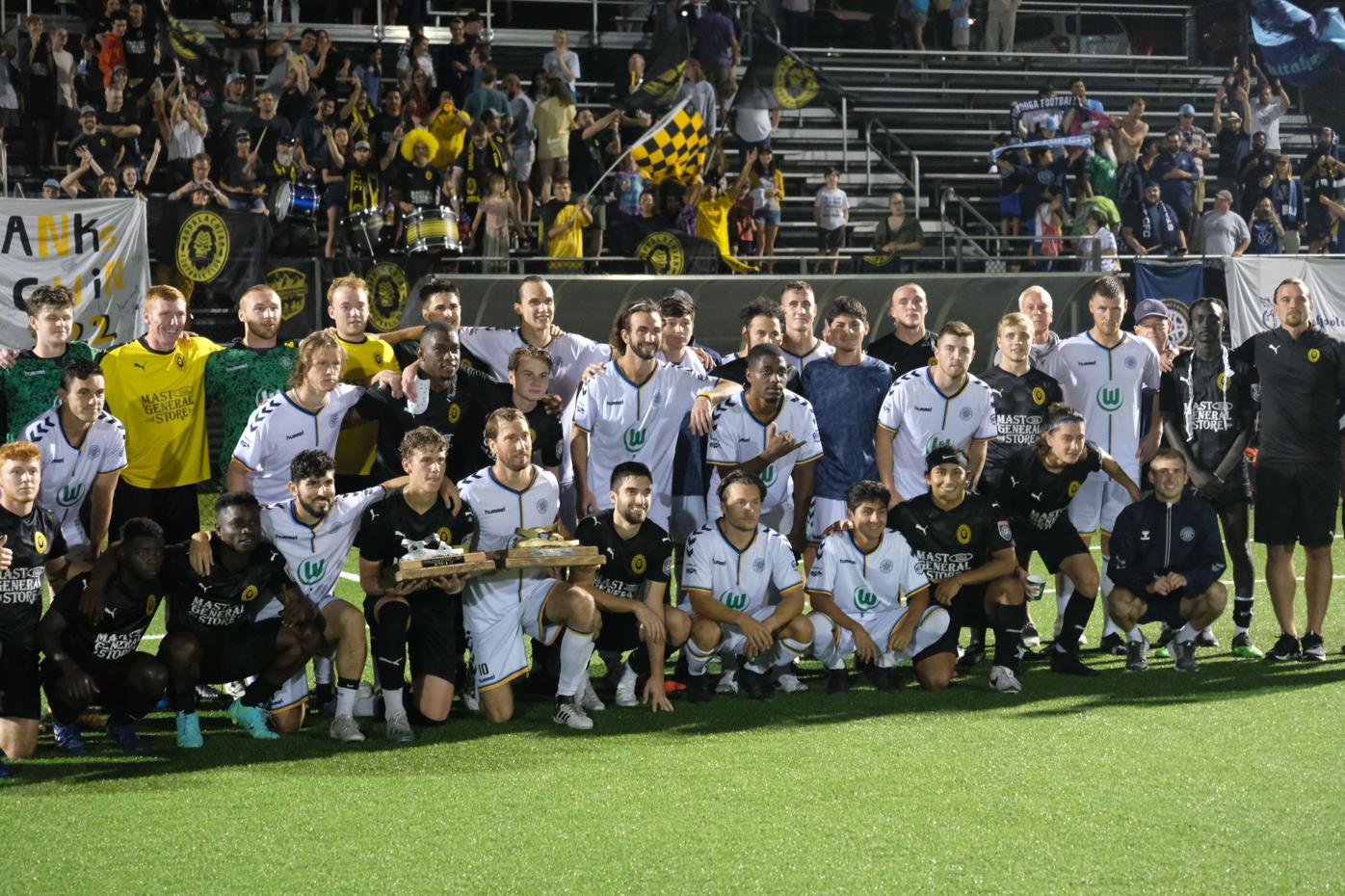 Players and staff from Appalachian FC and Chattanooga FC pose together after the 2021 Chaco Cup. 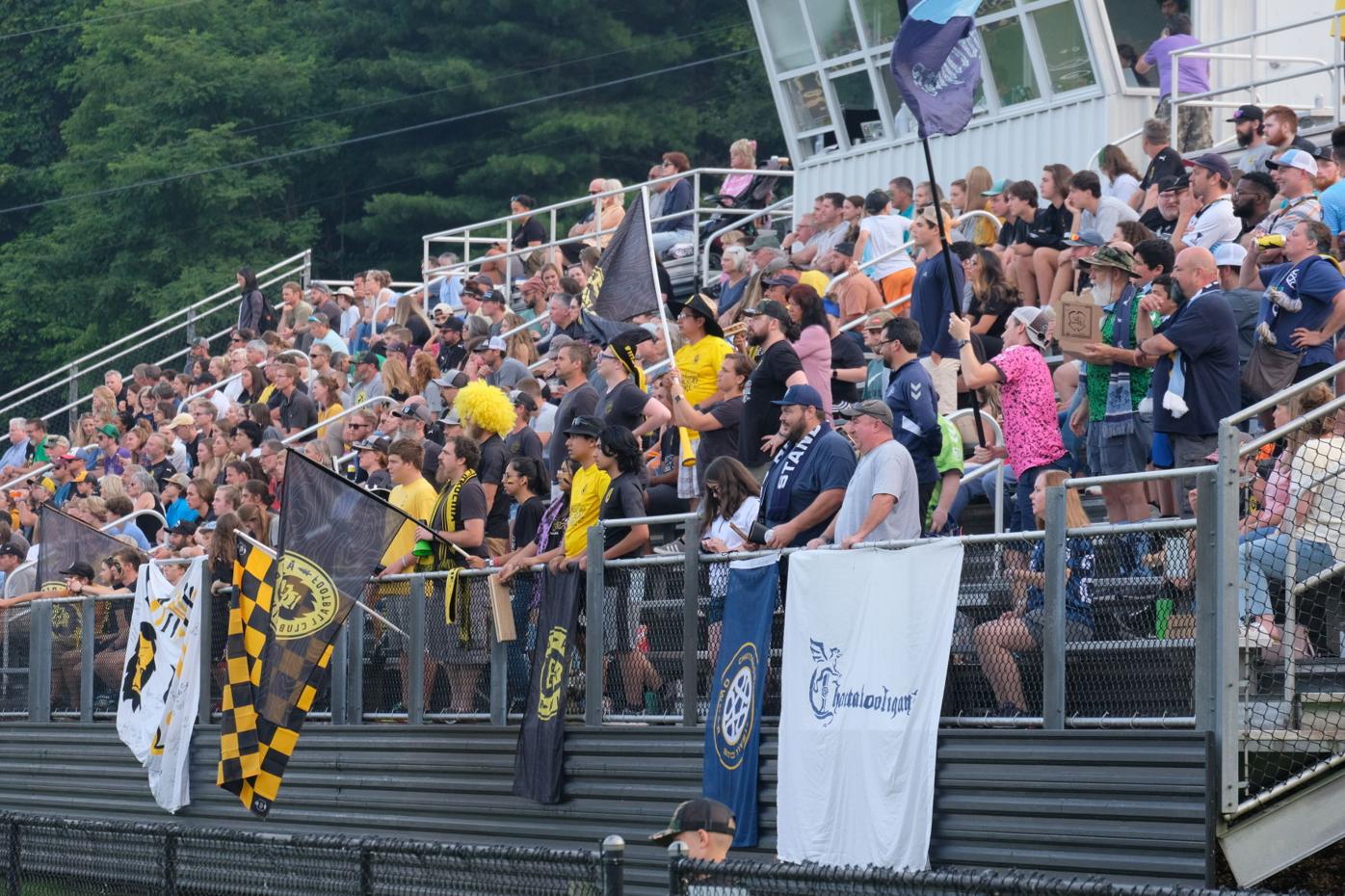 For the final game of their inaugural season, Appalachian FC played in front of a packed Ted Mack. 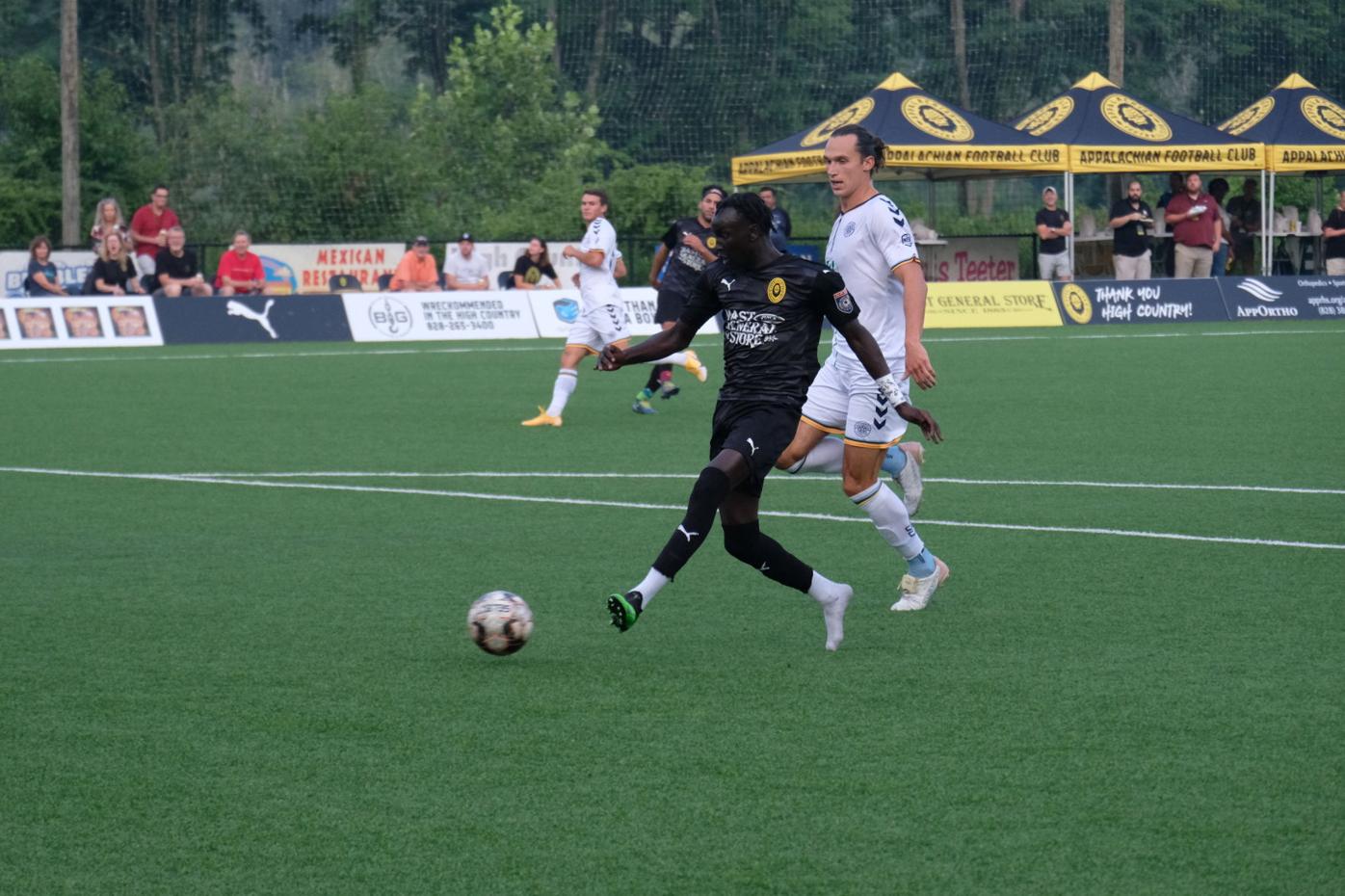 Even though he lost his shoe in the build-up, Jeremiah Luoma had one of Appalachian FC’s few scoring chances in the first half, only for it to be call offside. 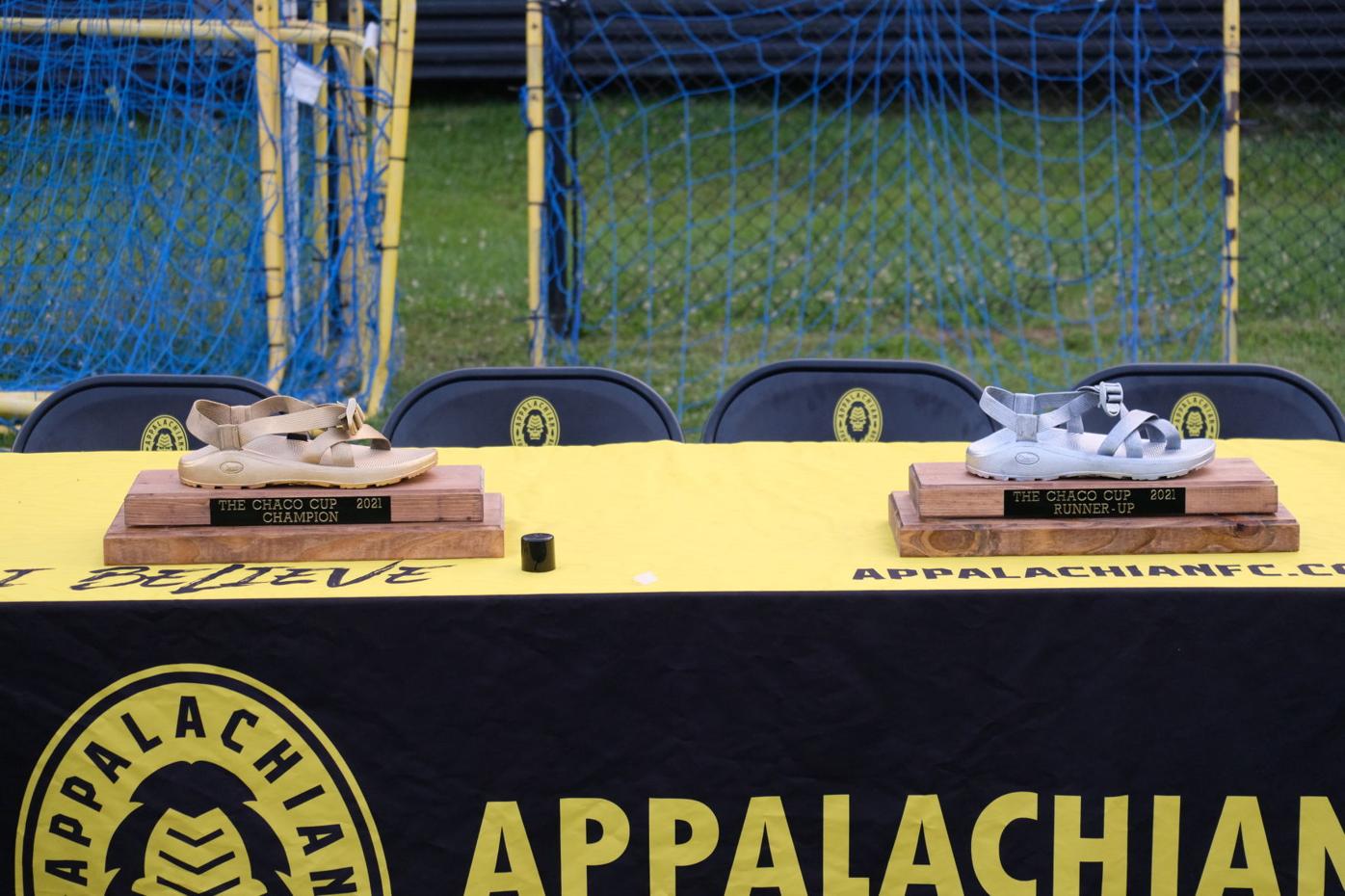 The Golden and Silver Chaco, awarded to the winners and runners-up of the 2021 Chaco Cup. 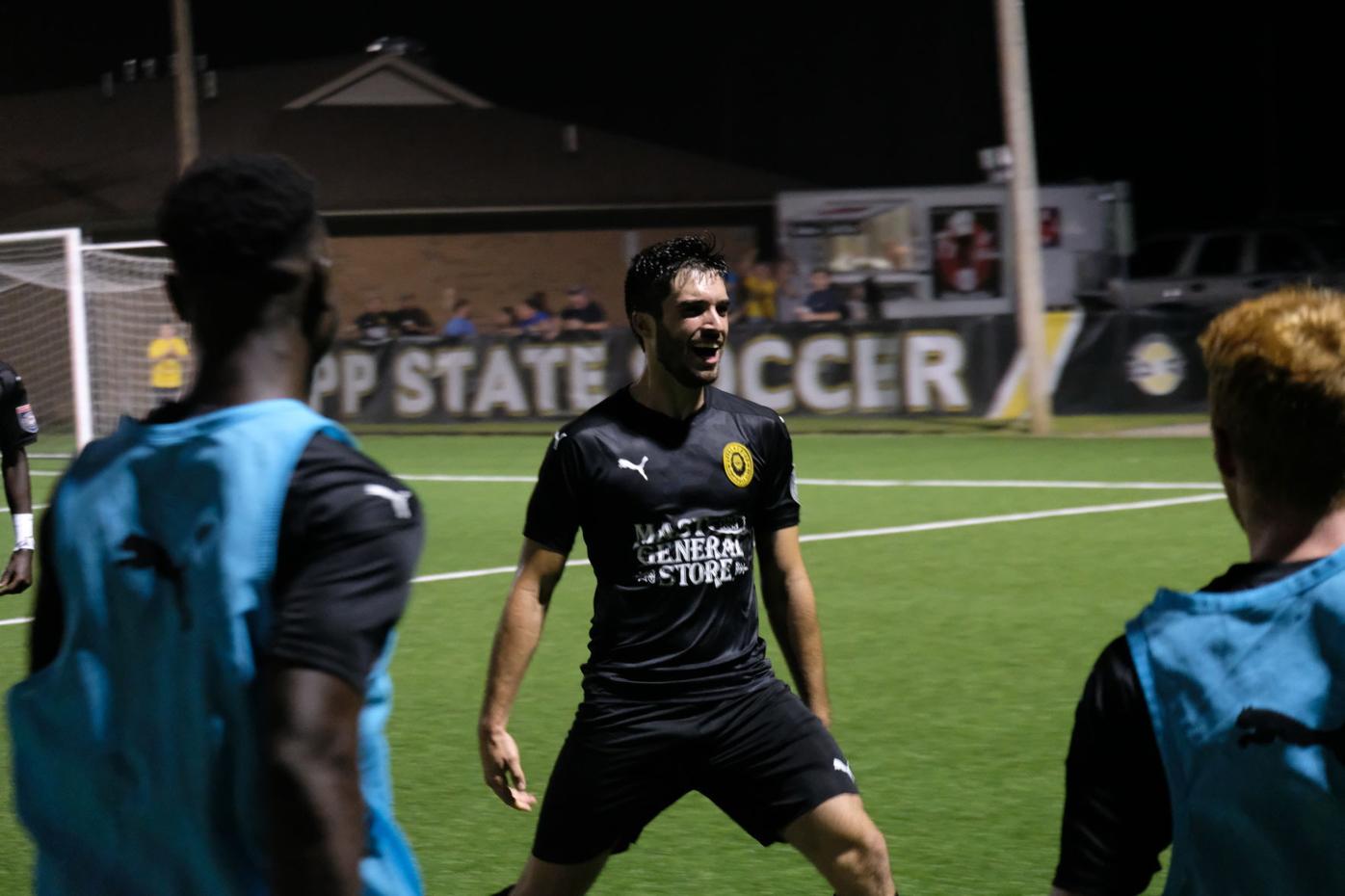 Angelo Fabricio is swarmed by his teammates after scoring AFC’s second goal against Chattanooga FC on July 21. 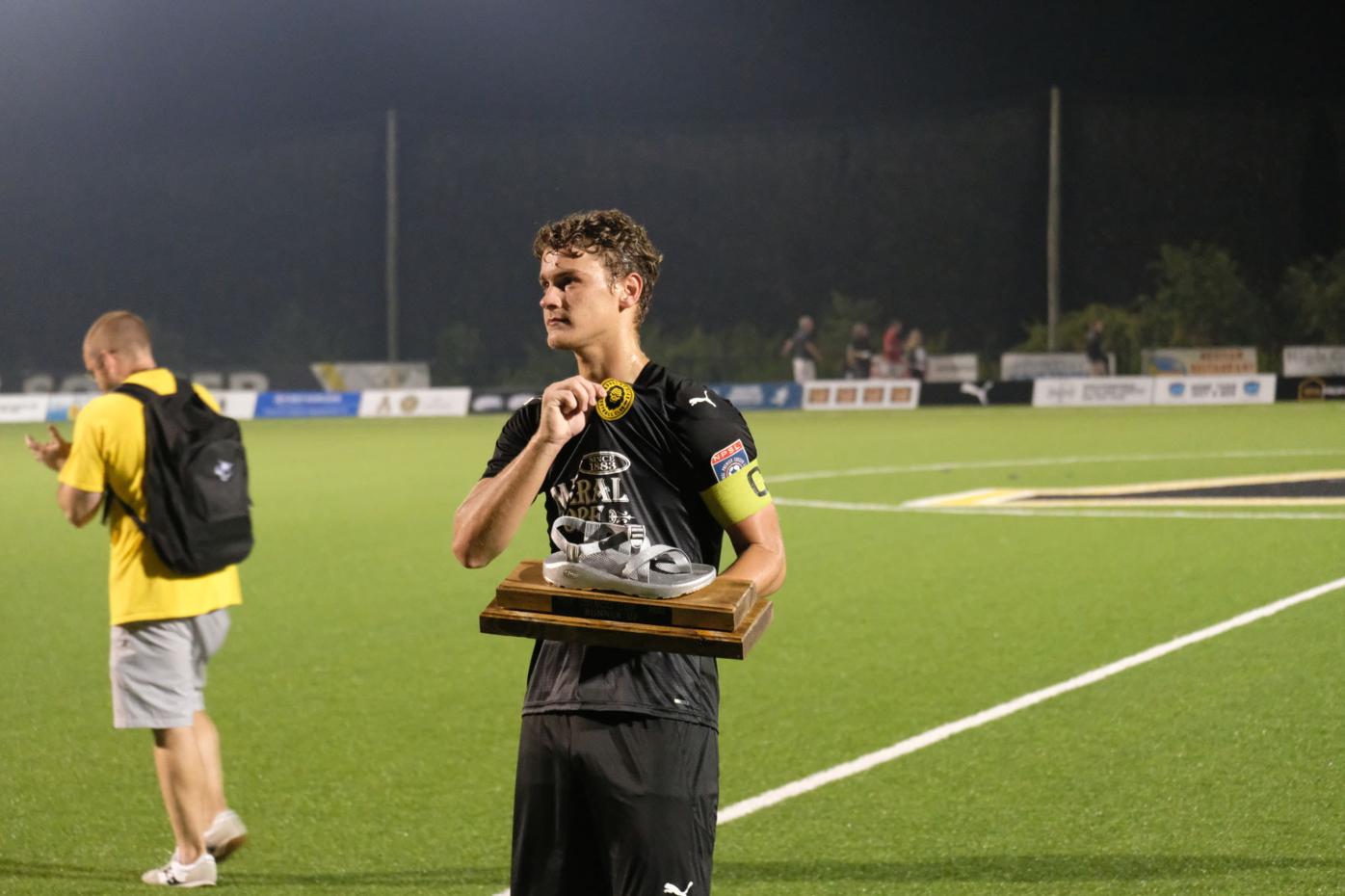 Alex Render became the first player in Appalachian FC history to captain his side to silverware, picking up the Silver Chaco trophy after losing to Chattanooga FC on aggregate in the 2021 Chaco Cup.

Players and staff from Appalachian FC and Chattanooga FC pose together after the 2021 Chaco Cup.

The Golden and Silver Chaco, awarded to the winners and runners-up of the 2021 Chaco Cup.

BOONE — The inaugural season of Appalachian FC ended Wednesday, July 21, with a 3-3 tie against Chattanooga FC in the Chaco Cup, where AFC finished as runners-up and lifted the Silver Chaco trophy.

While it was an exhibition, the game was the second of a two-legged “final” for the Chaco Cup, with CFC winning the first game 3-2 on July 7. Heading into the game, AFC needed to win by two goals to win outright on aggregate, or by one to send it to penalty kicks.

Not helping their cause was AFC’s short-handedness, missing Thomas De Graauw and Myson Darden.

With 1,100 fans at their back and the Ted Mackorell Soccer Complex as loud as ever, the final 90 minutes of AFC’s season began. Almost immediately, the home team found themselves in trouble.

A penalty was awarded to Chattanooga in the third minute, and captain Juan Hernandez deftly slid the ball past AFC keeper Nick Bucholz for a 1-0 lead. While the one goal lead is not the more insurmountable, with aggregate it meant AFC were essentially in a two goal hole.

The black and gold tried to answer back to no avail, with chances from Kelvin Mulinya and Jeremiah Luoma being called off for fouls. However, it was Chattanooga that was having the more serious fouling trouble, with Nick Spielman picking up the first of the team’s four yellow cards in the 30th minute.

The 33rd minute saw CFC extend their lead, when Brett Jones scored on a low shot off an assist from Hernandez. Playing desperately, AFC could not convert what chances they received as the halftime break drew near.

In the fourth minute of added time, the final of the first half, Camden Holbrook gave the home team some hope, converting a penalty to make it 2-1 heading into the half.

“It didn’t help, conceding the penalty early on, it sort of derailed us a little bit,” Appalachian head coach Dale Parker said. “Once we calmed down, we played really, really well to halftime.”

Only five minutes into the second half, CFC was dealt their heaviest blow yet, as Alec McKinley was given a straight red card for a spikes-up tackle on Angelo Fabricio. Down to 10 men, the professional team from Tennessee was forced onto their heels by the semi-pro club from Boone.

Fabricio rebounded from McKinley’s tackle by leading an attack that was repeatedly threatening the CFC goal, each time getting closer and closer to tying it up. In the 82nd minute, Fabricio scored the leveling goal, with a rocket fired from the edge of the box that Michael Barrueta had no chance of saving.

Eight minutes later, Fabricio sent the home crowd into raptures, with a late goal to take the lead and tie the series on aggregate.

However, it was not meant to be, as Sean Hoffstatter scored in the second minute of injury time, tying the game at 3-3, but giving CFC the 6-5 aggregate win.

While the team may have lost on aggregate, Parker said his team should be proud of how they handled themselves and played.

“I felt we could go win the game, which is a testament to the boys,” Parker said. “I’m ever so proud of them to go within a goal of a professional team and to tie against a professional team is massive for their confidence. Hopefully, one or two guys caught the attention and in the next few years, we’ll have one or two guys playing at that level.”

After the game, the team gave one final ovation to the crowd, who in turn thanked them for a memorable season and wished them the best in their future endeavors.

Awarded to CFC was the Golden Chaco trophy, while AFC captain Alex Render became the first in club history to lift silverware with the Silver Chaco.

“I feel like the fans have expressed their opinion on how well we did this year,” Parker said. “Hopefully, we can kick on and make this even better next year.”