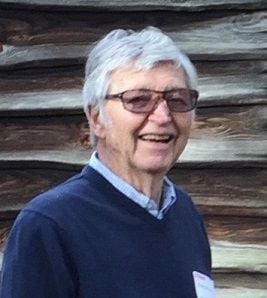 Francis Pressly was born on his father’s dairy farm outside Stony Point, NC, Iredell County on November 24, 1931. He graduated from Scott’s High School and continued his education at Erskine College and North Carolina State to receive a Bachelor of Science degree in Animal Husbandry and later a Masters in Education from University of Maryland. He was also an U.S. Army veteran, serving from 1954 to 1956 in Germany.

Francis married Sibyl White, his high school sweetheart, on June 8,1955; they have been married 64 years.

Francis had a diverse career spanning 4 decades and 5 continents as an educator and programs director in youth development, agricultural practices and sustainability. He began his career in Lexington North Carolina as a 4-H Extension Agent, and soon became the director of the first Peace Corps program in Brazil in 1961. He and Sibyl lead Peace Corp volunteers in Rio de Janeiro for 3 years. He became the Director of International and Domestic Programs for the National 4-H Council in Chevy Chase, Maryland where he worked for 20 years.

In 1984, he and Sibyl returned to their home state to realize a dream of historic preservation, farming and hospitality. They rehabilitated an old Valle Crucis farm and opened the Mast Farm Inn in June of 1985. They offered guests a respite from busy lives providing them with fresh grown food and comfortable accommodations in a relaxed family setting. Francis retired in 1996 and continued to be active in many service, community and church organizations, including Boone Sunrise Rotary Club, Holy Cross Episcopal Church and Valle Crucis Historic Commission. Francis and Sibyl served as coordinators of the Valle Country Fair and pressed untold gallons of apple cider, grilled hundreds of chickens at the Valle Crucis Park to raise funds for a new education building at Holy Cross, and headed the Potato Club down by the river where the crop was given to a local food bank.

Francis and Sibyl shared a love of gardening and enjoyed growing vegetables and flowers and sharing their bounty with the community. His friends loved to see the bright blue truck coming their way, as he distributed whatever vegetables were in season. Corn and tomatoes were specially anticipated. He loved to travel and relax at their beach house on Topsail Island with his family. He was a life long Wolfpack fan and loved the years that NC State made it to the final four!

Most of all, Francis was a wonderful husband, father and grandfather. He was a mentor to many of all ages throughout his life. Always willing to pass on his knowledge, advise and offer a hand to those in need. He reminds us there is good in this world.

Francis is survived by his wife, Sibyl; children, Bill Pressly and partner Lia in Valle Crucis, and Sally Pressly and her husband, Tom Ballmer, in Mason City, Iowa; and grandchildren, Sophie, Jacob and Zach.

Francis was preceded in death by his mother and father, Eula and William Pressly; and his baby brother, Paul.

If desired, memorial donations in honor of Francis may be made to Holy Cross Episcopal Church, Hospitality House of Northwest North Carolina, Valle Crucis Community Park or Watauga Habitat for Humanity.

Online condolences may be shared with the Pressly family at the website www.austinandbarnesfuneralhome.com.