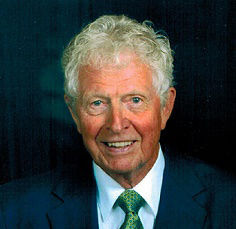 Dr. Gregory was born and grew up in Yorkville, TN. After graduating from the University of Tennessee in Knoxville, he spent his professional life in North Carolina. His first job was at Ohio State University where he was a professor on the O.S.U. Faculty. During the three years in Columbus, two of their children were born.

Dr. Gregory and the love of his life, Ellen McLeary Gregory, were married in June of 1954. They enjoyed 66 wonderful years of marriage. Their relationship with their children and grandchildren was very close with lots of “I love you” throughout those many years.

Dr. Gregory spent much of his life in the academic community; however, over the years, he stayed connected with friends and family in Yorkville, TN. He grew up in the Hopewell Community near Yorkville, but Hopewell ceased to exist in the 1950’s.

Yorkville also ceased to exist by the 1990’s; however, Yorkville community leaders were determined to bring back attention to Yorkville. They devised what appeared to be a far-fetched plan of action.

They recalled in the 1930’s that locals enjoyed washer pitchin. It was a game that required skill, but it was competitive and imparted good fellowship. Community leaders believed that washer pitch’in’ could help in reviving Yorkville.

Dr. Gregory attended the initial planning to establish a tournament for washer pitch’in’. The committee established a name for the tournament: “The International Washer Pitch’in’ Tournament.”

The first competition was held in 1994 with over 2,000 washer pitch’in’ enthusiasts in attendance.

Over the years, hundreds of individuals have participated in the competition and thousands have attended to watch the competition and relish in good fellowship. “The International Washer Pitch’in’ Tournament” has put Yorkville on the map as the most prestigious tournaments of its kind in the country. Dr. Gregory participated in the tournament for 19 years and was a finalist (1st or 2nd place) eight times.

“In a country of Bull-Durham roll you owns and ‘Days Works’ chewing tobacco, I was born in the cotton country of West Tennessee in 1931. My home in Hopewell, consisting of my Dad’s store, a tilted school house, and a wood-pecker decorated Methodist Church, was located about half-way between the Mississippi and Tennessee Rivers.

My vocation during those testing depression years was picking and chopping cotton and helping in my Dad’s country store. My greatest accomplishment, without a doubt, was picking 400 pounds of cotton a day.

Hanging around a country store and listening to all the local folklore made a lasting impression on me. Hopewell made ‘God’s Little Acre’ look like the Kennedy Center.

I spent my first six years at Hopewell School, whose total eight grade enrollment was less than 40. In fact, I was the only one in my sixth grade class. Transferring to Yorkville, after Hopewell closed, was a traumatic experience. However, Yorkville wasn’t any metropolis, since my high school graduating class numbered eight.

From Yorkville, I completed a B.S. Degree in 1953 from the University of Tennessee, Knoxville. Afterwards, I received a M.S. and Ph.D. from North Carolina State University. I served on the faculty at Ohio State University for three years before returning to NCSU where I have been a full professor.

In addition to being an active participant in several sports, I have enjoyed the outdoors, with special interests in fishing and hunting. Some might think my other diversions border on the absurd. For example, I have served as a judge in the ‘National Hollering Contest,’ then a guest of Governor Bob Scott at the mansion for the first and only ‘Black-tie Possum Dinner’ and been involved with the ‘National Fiddling Contest’ at Love Valley, NC.

Another undertaking is the ‘Hard-Core Club’ which I started in the early 70’s. Its objective is to further good country living (country music and vittles). My title is ‘The He-Coon.’ The membership includes persons from various walks of life-from service station operators to a former NC governor. Country music recording stars Loretta Lynn and Tom T. Hall are members.

My background has affected my feelings toward poor uneducated country folk. It has helped me in my understanding of hard work and poverty. I have been a participant in both. Although my present environment on a university campus relating to academicians is drastically different from my early life, I have maintained firm roots in things that are near to nature and country folk. And, recollections from that past, when life was simple, still beckons to me.”

The family extends great appreciation and thanks to the HEROES at the Foley Center at Chestnut Ridge in Blowing Rock and Hospice for their skilled nursing care.

Online condolences may be shared with the Gregory family at the website www.austinandbarnesfuneralhome.com.