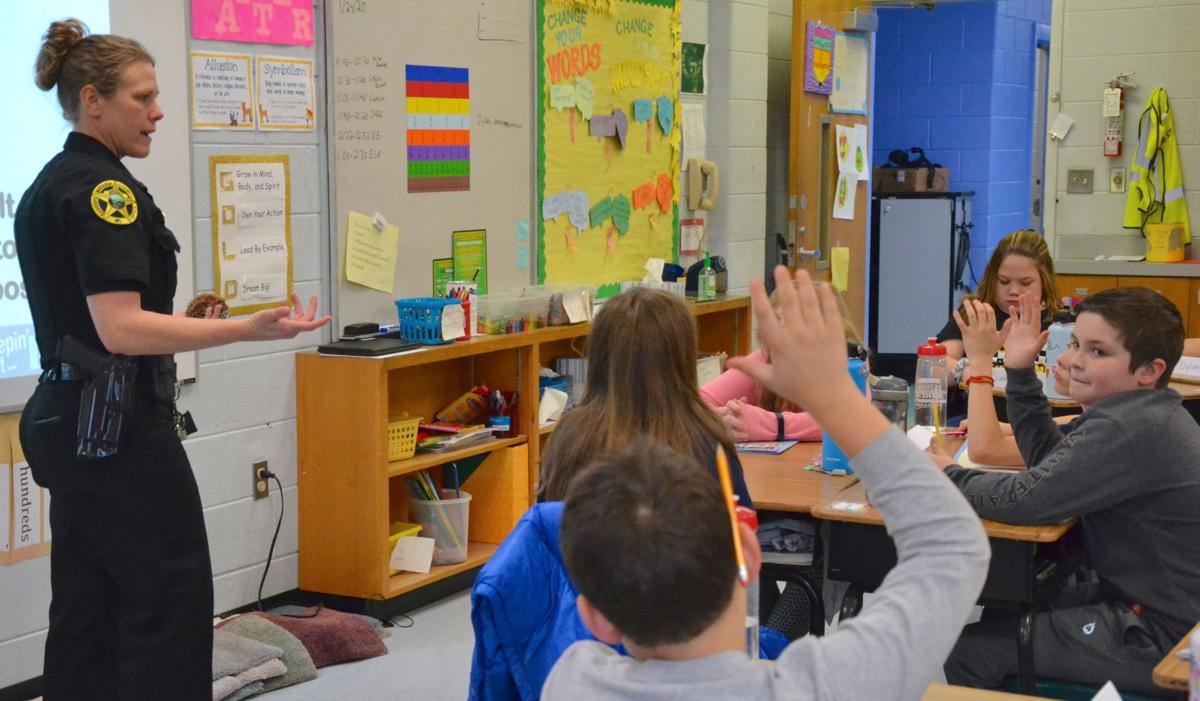 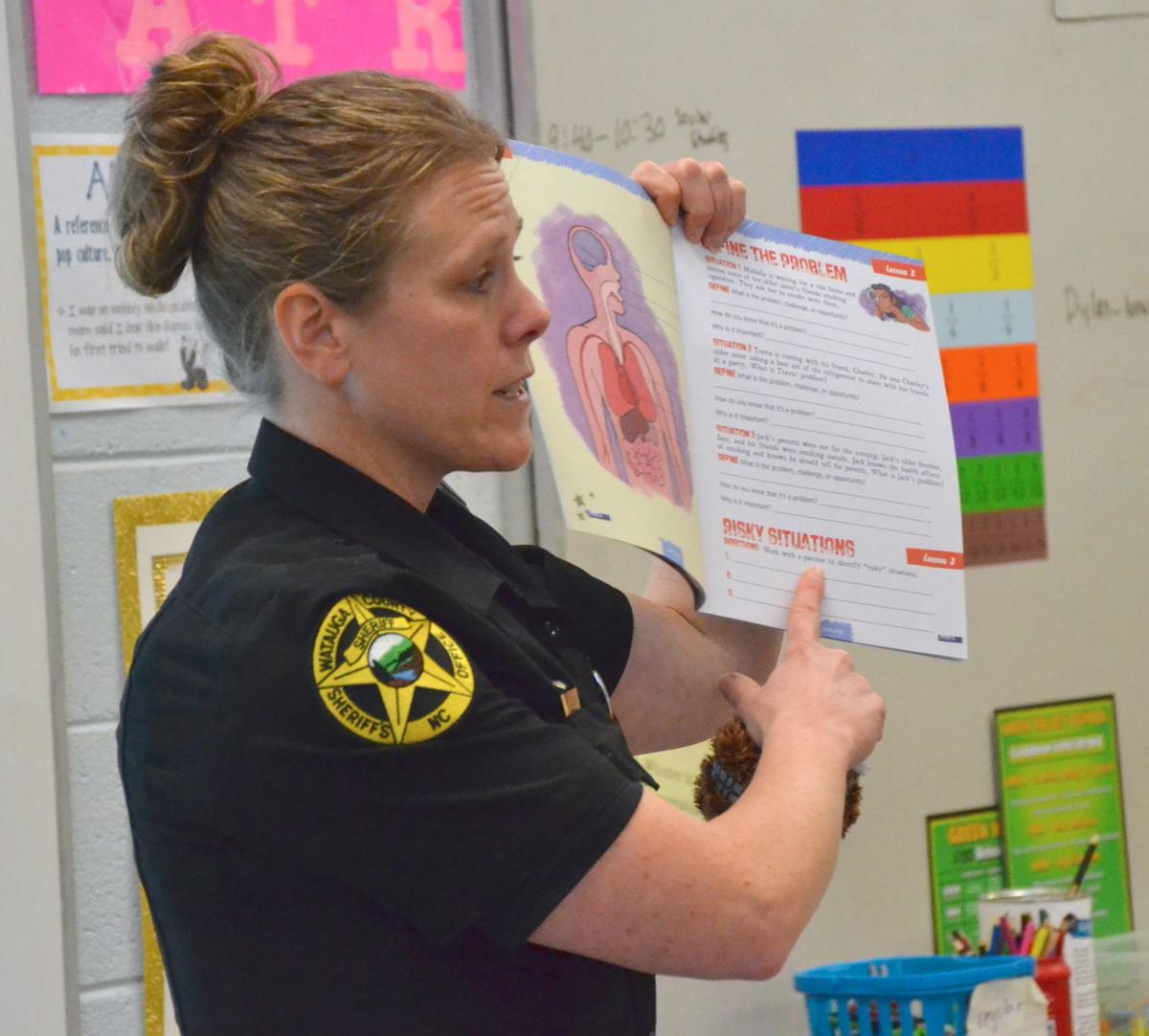 Deputy Kat Eller uses a workbook to talk with students about positive decision-making during her DARE class. 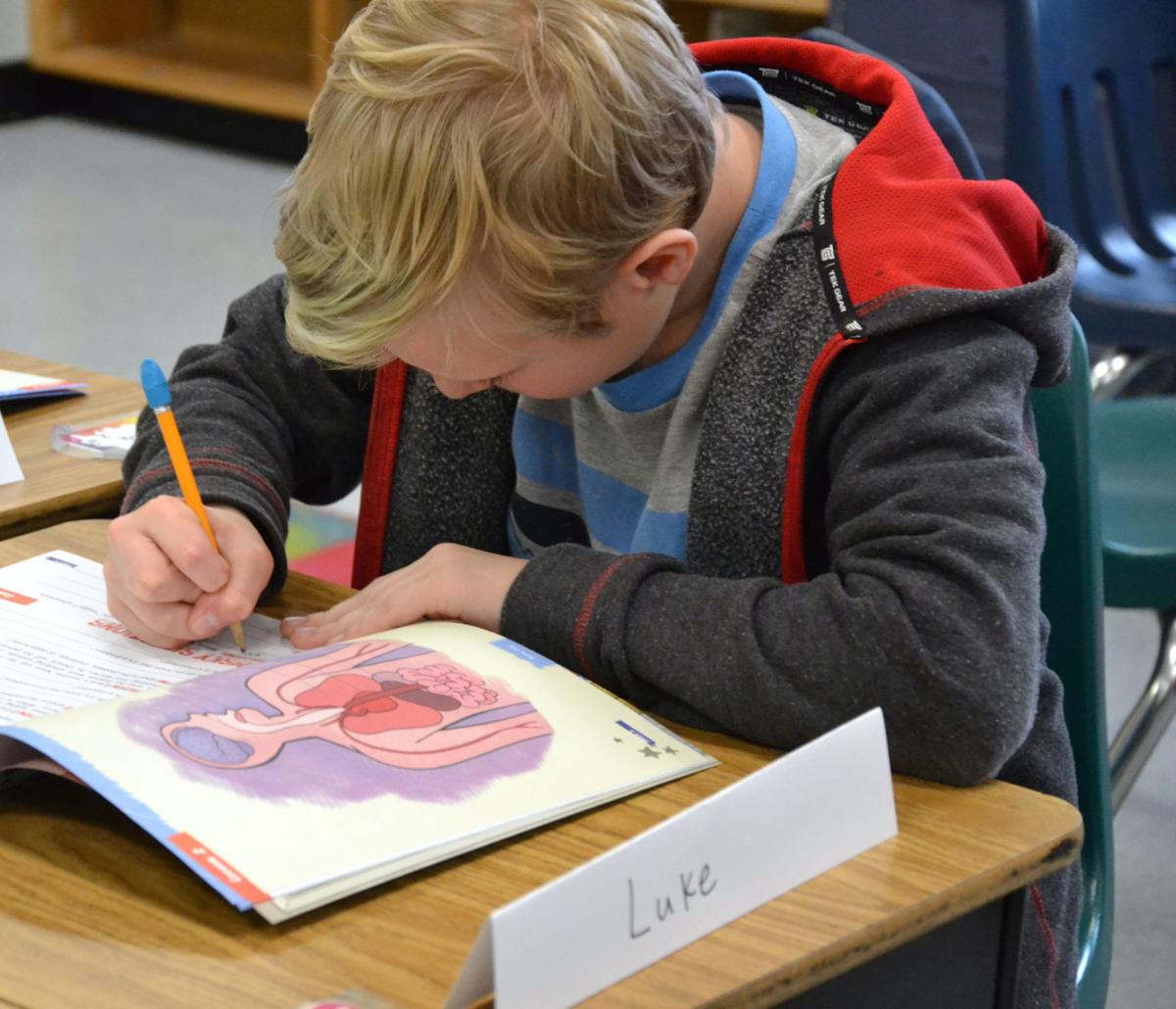 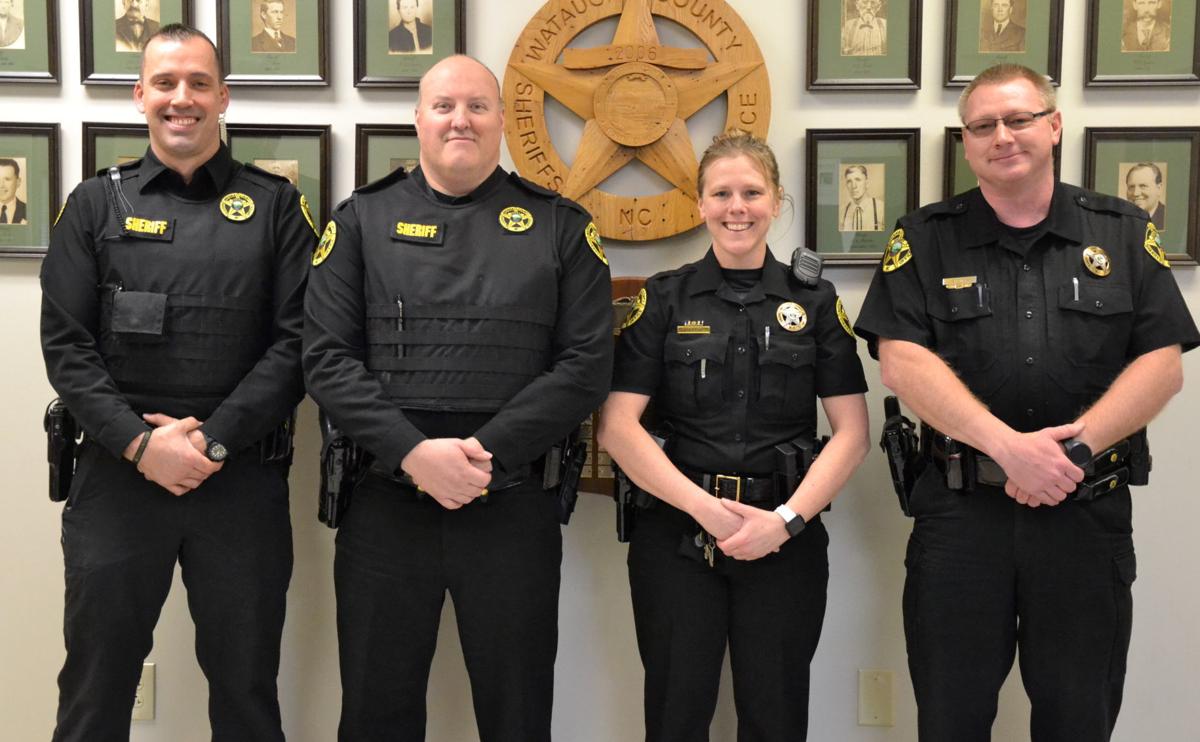 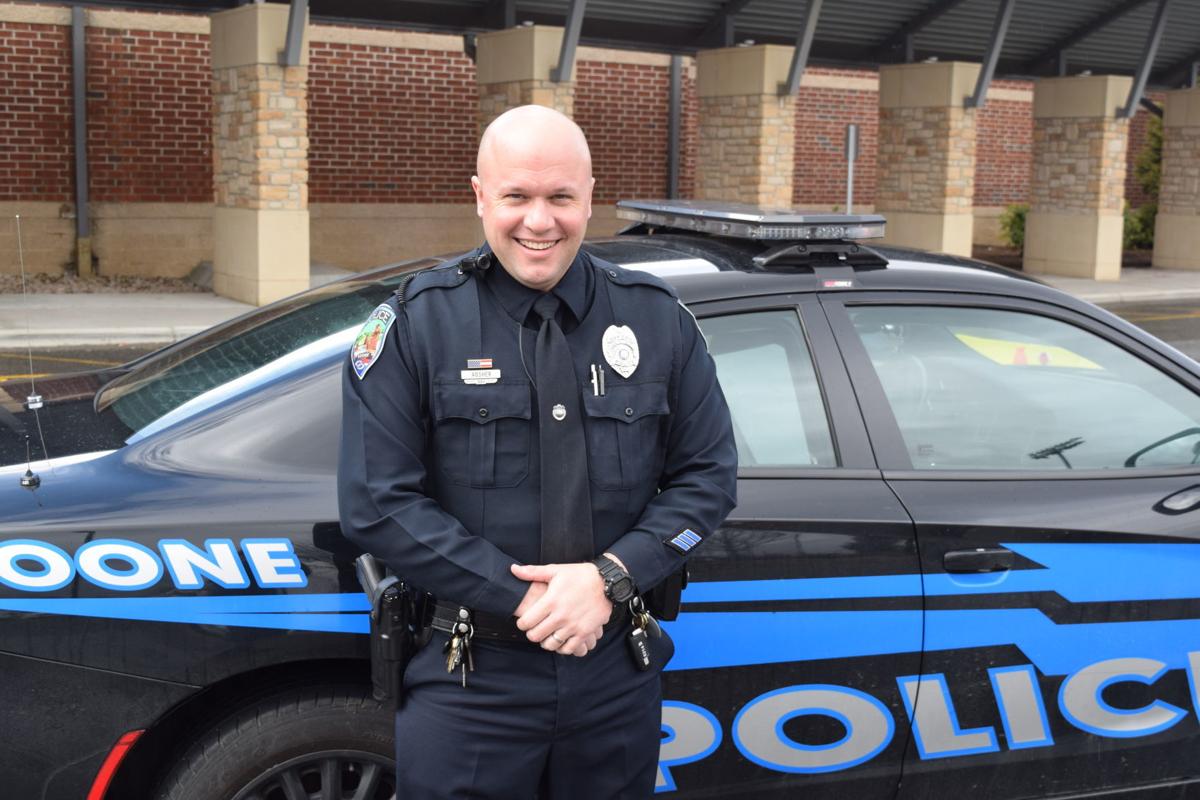 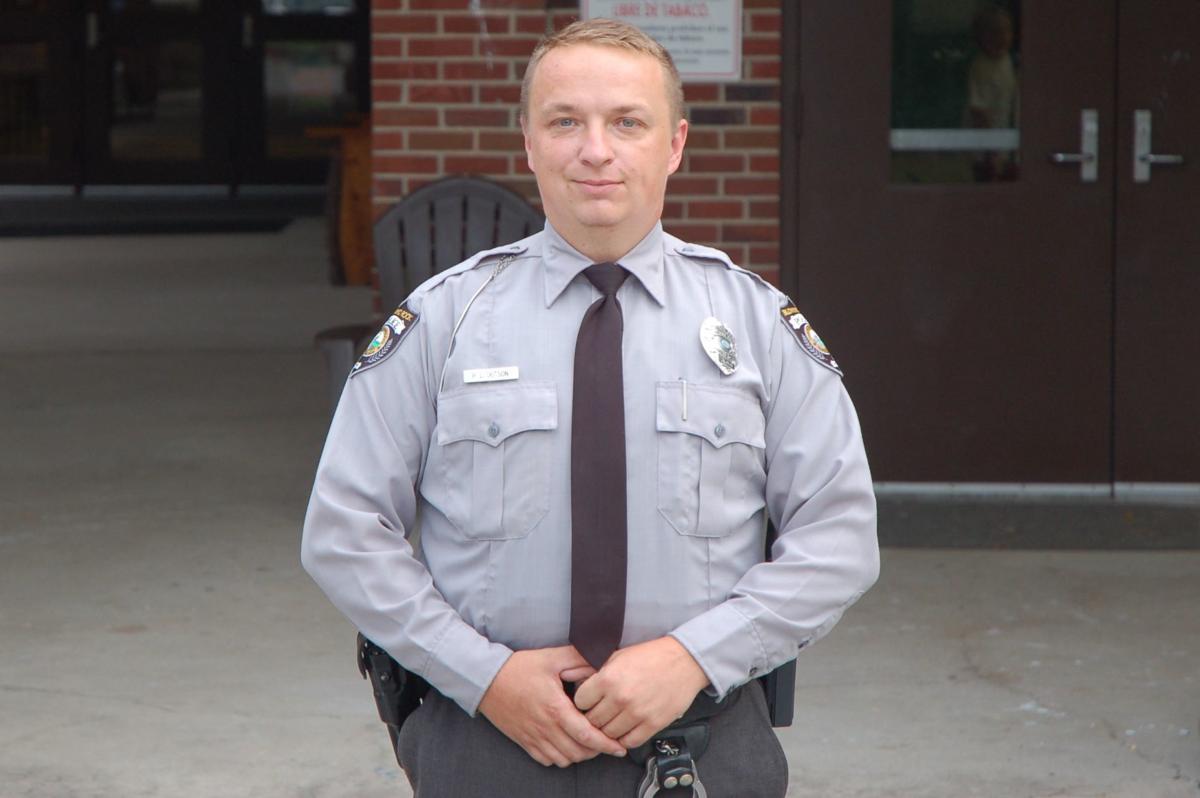 Deputy Kat Eller uses a workbook to talk with students about positive decision-making during her DARE class.

As Watauga County Sheriff’s Office Deputy Kat Eller walked down the hallways of Green Valley School, each student who passed by greeted her with a high five, fist bump or a hug.

Eller was hired by the WCSO as a school resource officer in July, and is now one of five officers serving Watauga County Schools. During the last two years the school system’s SRO positions increased from two to six — with one that serves at the Watauga campus of Caldwell Community College and Technical Institute. Currently WCS receives services from one Blowing Rock officer, one Boone Police officer and three WCSO deputies.

The SRO team will soon grow to seven with the help of a grant from the N.C. General Assembly and the N.C. Department of Public Instruction. This is good news to many, as several Watauga public officials and school administrators have advocated during the last few years for the placement of an SRO in each of the nine county schools.

“I was surprised when I came to the school district six years ago and found there was really only one SRO in the county,” Elliott said. “I came from a county where the sheriff’s office provided an officer in all nine of the schools in that community. We have made a lot of progress in the last six years. It takes all these professionals working together with our students and families to keep our schools safe.”

Elliott made the announcement of the additional SRO funding for the 2019-20 school year during the Jan. 13 Watauga Board of Education meeting. In an email sent the same day to County Manager Deron Geouque, Elliott discussed the $33,000 grant that could be used right away and must be expended by June 30.

The grant was then discussed during the Jan. 21 meeting of the Watauga Board of Commissioners. According to Geouque’s comments in the board’s agenda packet, the grant requires a county match. He stated that five months of the SRO salary would be $24,711 — with $16,474 from the state and $8,237 from the county. Additionally, the county would need to fund an additional $44,434 in initial start-up costs for a vehicle and equipment, according to Geouque. The subsequent budget year the SRO’s salary would be $59,308 with the state paying $33,000 and the county fronting $26,308.

Several commissioners shared concerns about the questionable nature of recurring grant funds from the state legislature for SROs, and that the county would have to take on those expenses in the case the state halted funding. Elliott stated in his email to Geouque that he had spoken with N.C. Sen. Deanna Ballard (R-Blowing Rock) and that she had felt “strongly that the funding for these positions will continue in future years.”

With the addition of a new officer, WCS stated that the plan would be for Morrison to stay at Hardin Park. Morrison would also provide DARE instruction at Two Rivers Community School, back up support at WHS and support as needed for other SROs. Eller would likely stay at Parkway and Green Valley; Scott would be placed at Cove Creek and Bethel; and the new officer would take over at Valle Crucis and Mabel.

“Currently, the WCSO is in the process of selecting a candidate for our newest SRO position,” said WCS spokesperson Garrett Price. “When that position comes on board, we will no longer have any officer with more than two schools each. The new position will help to better distribute that workload.”

What does an SRO do?

In the mornings, Eller greets students, faculty and staff as they enter the schools as well as acknowledges parents. She makes rounds throughout the school for safety precautions, checks in with teachers to see if she’s needed and may sit in on disciplinary actions — like in the case of harassment or bullying — with school administrators, she said. She then goes to her other school and does the same.

At the high school, Absher may deal with situations such as calming down irate students to finding drugs or possible weapons. He has served in the SRO position the longest, starting his time in the role in October 2015. He came into the position after working as a patrol officer with Blowing Rock Police and WCSO for about 13 years.

“It got me thinking, ‘What if I could get to somebody earlier? What if I could help them and change their path? If I could just change one, that would be a great thing and I would feel like I’ve accomplished something,’” Absher said.

Eller also noted that being an SRO is a drastic change from her previous job as a Boone Police officer, where she would arrest adults for committing crimes. Now, she interacts with students from incoming kindergartners to outgoing middle school students before they go on to high school.

“It has really been such a blessing for me to be a part of hopefully keeping them from making bad life choices in the future,” Eller said.

Eller conducts a DARE class several times a week with Green Valley fifth-graders, just as she had with Parkway students in the fall. DARE classes use an evidence-based curriculum in which students discuss topics based around responsible decision-making, self-awareness, understanding others, relationship and communication skills as well as handling responsibilities and challenges, according to the DARE program. Eller had already discussed decision-making when encountering alcohol or tobacco use with the students, and on Jan. 24 talked with them about risky behaviors and making safe choices.

The students in Kirbi Bell’s class discussed risky situations — such as allowing a friend to copy a homework assignment or choosing to be around friends who are smoking — and the consequences that may follow. Eller talked with the students about positive risky behaviors — like trying a new sport — and how to determine if an action would have beneficial or harmful outcomes.

Absher said many students who enter the high school as freshman don’t know what to expect and may struggle with irregular behavior. He said he finds it rewarding to be able to talk with students about possible consequences of their actions and help set them on a different path, and then to befriend them and “walk with them as they go through these next four years.”

“Our school resource officers do so much more than act as law enforcement alone,” Elliott said. “In addition to the important security they provide, they spend the majority of their time helping students and families in need. Their primary goal is to keep our students safe and to help students make good choices.”

Heather Ward, a second-grade teacher at Green Valley, said that she works within the school system’s compassionate schools initiative and knows that many students in the building deal with trauma. This may mean that a student’s view of an officer in a personal setting may not be positive, as Ward knows there are some students who deal with legal issues such as restraining orders or custody issues with family.

“When (students) see law enforcement present in their personal life that means that something bad is happening,” Ward said. “Officer Kat does such an amazing job in being that positive and resilient figure to them and really bridging that gap to healing, and becoming a friend to these children. They see that she is there to help them and be a safe place for them.”

These are all tasks the SROs conduct during the regular school day. WCSO Major Kelly Redmon said that during the mid-year breaks, the SRO officers augment the WCSO patrol and civil division as needed, and then continue to monitor the schools once students return to school.

During the summer while students are not in school — from about mid-June to early August — SROs participate in trainings in addition to assisting daily sheriff’s operations. Redmon said SROs train on topics such as how to monitor social media posts for hints of harm, learning about popular smart phone apps that could be used for bullying or victimizing peers as well as rapid deployment/rescue task force training with local law enforcement agencies on the grounds of the schools.

“By the time that all of the listed activities are completed, they will begin preparing for the upcoming school year, which begins about two weeks prior to the first day of school,” Redmon said.

Sheriff Len Hagaman said that he and other WCSO staff were proud of the WCS and CCC&TI resource officers. Hagaman said the SROs, under the leadership of Morrison and Capt. Justin Wood, have proven to be a caring and engaged group who have the students’ best interests as their main focus.

“All of them have made strides in becoming a mentor and points of communication for students that may have a myriad of issues which may be impacting their academic successes,” Hagaman said. “Many students now feel 100 percent confident in being able to go to an SRO ... who will listen, and in some cases a literal shoulder to cry on.”