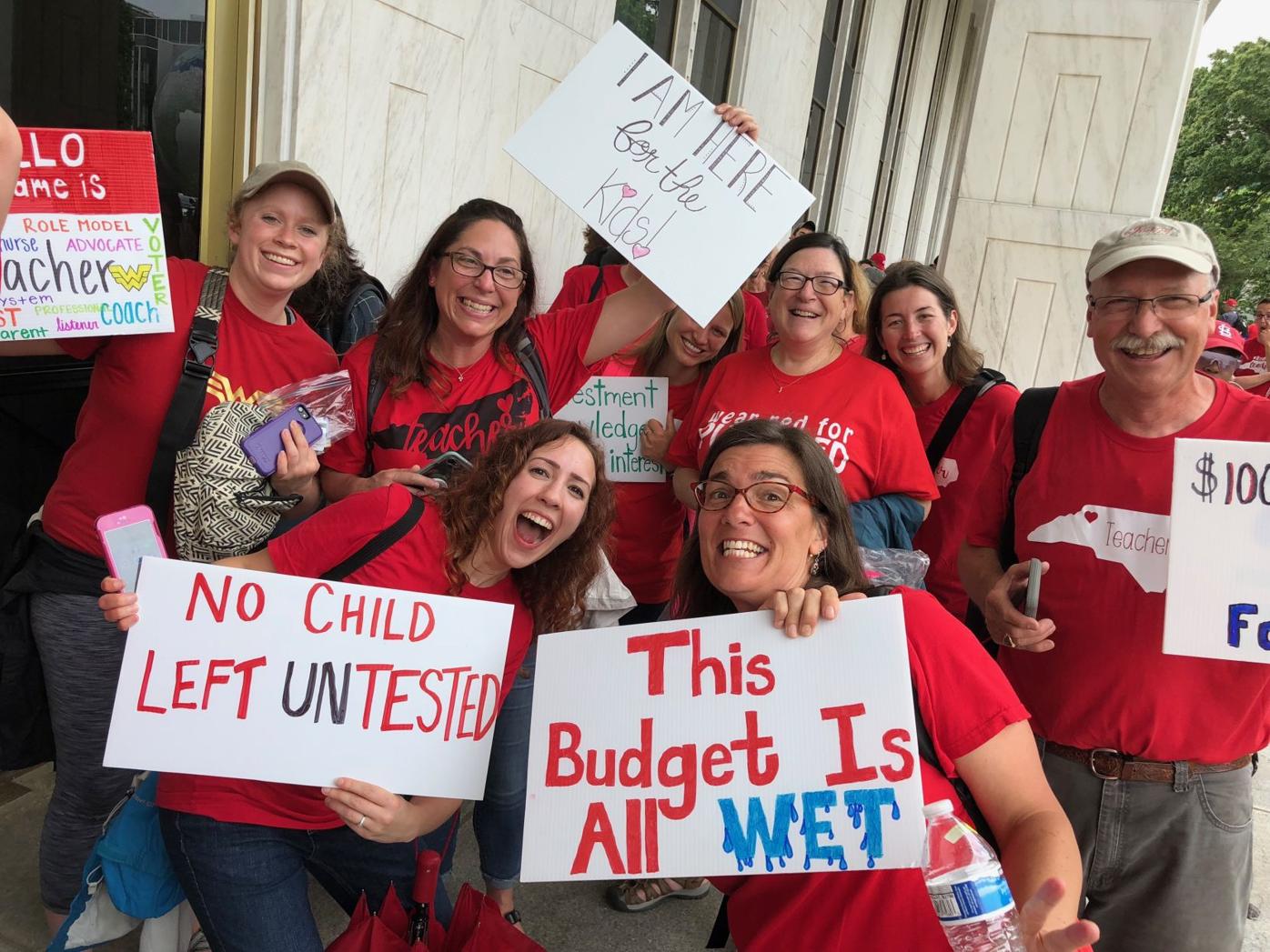 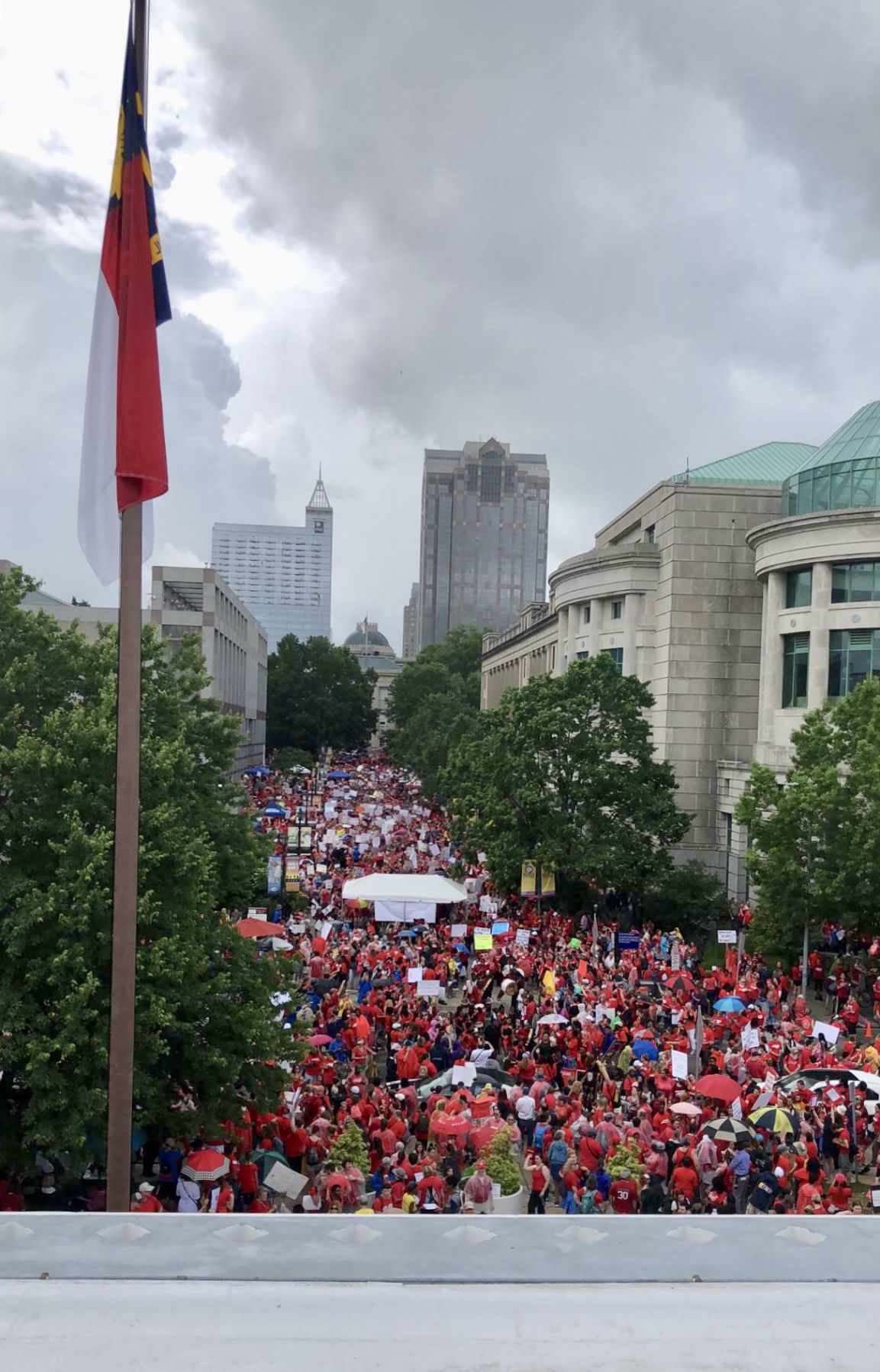 A sea of red could be seen in downtown Raleigh on May 16 for a teacher rally. 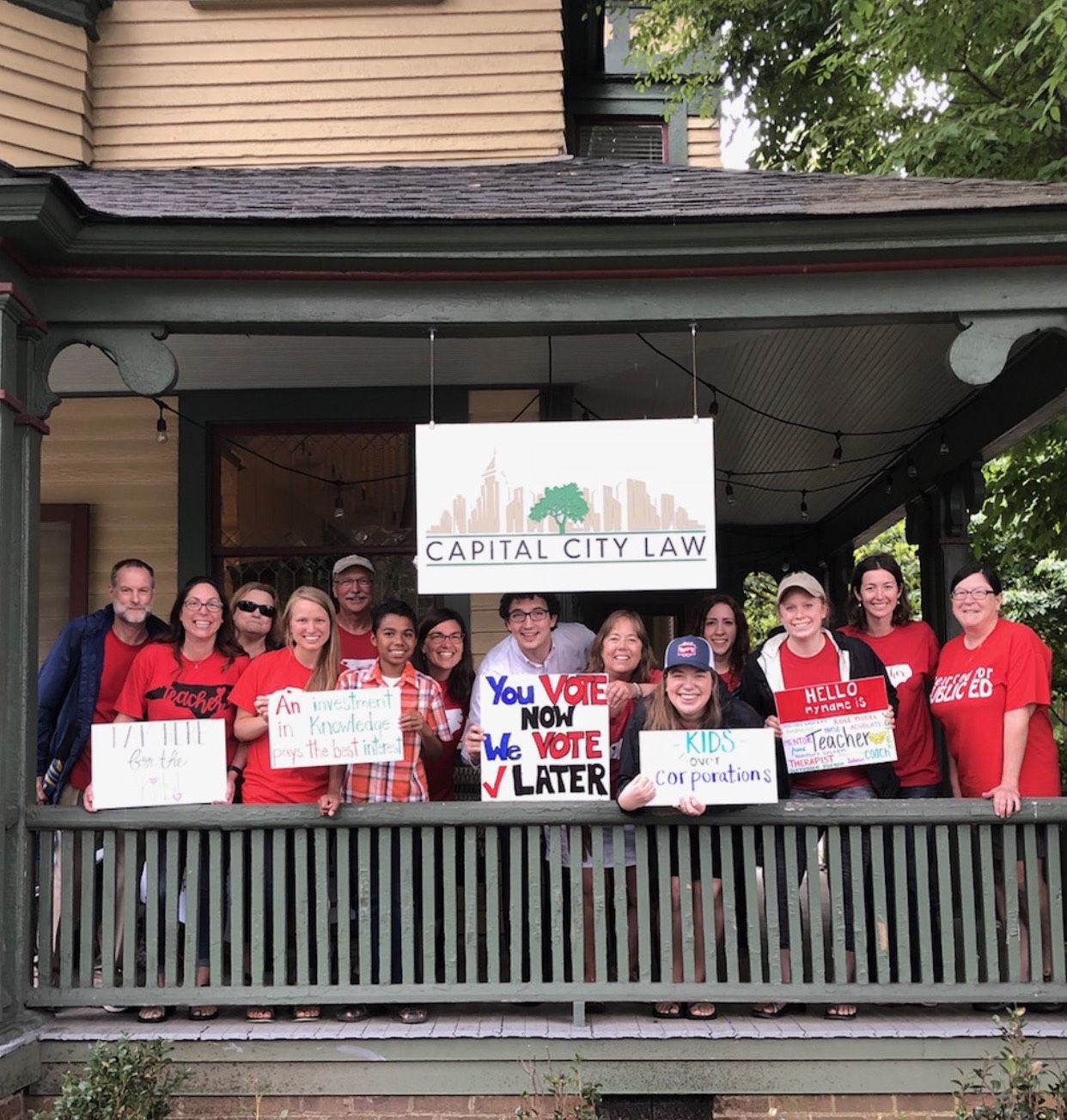 A sea of red could be seen in downtown Raleigh on May 16 for a teacher rally.

RALEIGH – A group of 12 Watauga County educators joined a sea of more than 19,000 people in red to “march for students and rally for respect” in Raleigh on May 16.

The group consisted of 10 teachers from Hardin Park and two retired educators. The 12 were part of a gathering of N.C. educators for an “Advocacy Day” — organized by the North Carolina Association of Educators. The event coincided with the first day of the 2018 North Carolina General Assembly short session.

The NCAE outlined legislative demands for the rally, including teacher pay raises; raising per-pupil spending to the national average in four years; hiring at least 500 more school nurses, social workers and counselors this year; enacting a multi-year pay and benefits plan for all educators (including things such as ending pay discrimination against veteran teachers and not tying pay to test scores); expanding Medicaid; lowering the class sizes; repairing schools with a statewide school construction bond; ensuring an instructional assistant in every K-3 classroom; bringing back Teaching Fellows; expanding and funding a solid elementary school literacy program; making pre-K possible for all families who want it; and funding mentoring programs statewide.

“It’s not all about the pay,” said Joni Horine, a K-8 math intervention specialist at Hardin Park. “It’s making sure the kids are in a safe environment and that the schools are solid and in good condition, and we have the supplies needed to support our students.”

Horine said even though Watauga County is lucky to receive funding from its county commissioners for education — as other counties don’t — the group of 12 wanted to attend the rally to show support for the cause.

“We wanted to show a united front,” Horine said.

According to the Raleigh News and Observer, approximately 42 school systems in the state closed for the occasion. Superintendent Scott Elliott said it was his decision not to close school for the rally, as WCS already has 20 missed days due to weather this academic year. With the school year closing soon, he felt students needed to be in school.

The 10 teachers who attended the rally did so by using their allowed leave with substitutes able to replace them. Elliott said the teachers did so knowing that with a small group attending, schools would still remain in session.

“I support our teachers who attended the rally and appreciate them for advocating for our schools,” Elliott said. “This is not just about teacher pay. This is about teachers asking for help and support at a time when they believe public education is under attack.”

The group left Watauga around 6 a.m. that morning to make it to the March for Students at 10 a.m. Jack Hellenbrand, an English as a second language teacher, said the march — full of teachers wearing red and holding signs — traveled to the N.C. State Legislative Building. There, the group waited outside to be able to enter alongside other rally attendees.

Some of the teachers who attended spoke about the unifying feeling they had while at the rally and a few said they had “chills” talking about N.C. teachers coming together for the cause. Many Hardin Park teachers who didn’t attend the rally still wore the color red to school to show support.

Second-grade teacher Anne Wilson said the atmosphere was very positive in the want for change, and was not at all negative or volatile.

“We need to unite as a state to show that we’re here for public ed,” said second-grade teacher Kelley Wilson. “It’s not just about Watauga County … it’s about public schools in general. That’s what we saw there and it was such an amazing experience to see all these teachers.”

Once inside the building, the group had the opportunity to speak with N.C. Sen. Deanna Ballard for about 15 minutes and Rep. Jonathan Jordan for a little longer, Wilson said.

The group said Jordan seemed very interested in what they had to say and they appreciated that he was interested enough to ask a lot of questions.

“Some of them are reading at a third- or fourth-grade level but we still have to test them on their (respected) grade level,” Herring said. “We talked about how that wasn’t fair. He didn’t know a lot about that so he asked quite a few questions to get more information.”

Jordan said he thought the meetings he had with the Watauga teachers and one Avery County teacher was very positive. He said it was interesting to see all the teachers at the General Assembly and he hopes they all got to meet with their representatives.

“It was good to hear them speak specifically on interactions with students,” Jordan said. “We had some great conversations. I’ll be meeting with them in the district, and they invited me to their schools.”

Elliott mentioned that he appreciated Ballard and Jordan for taking time to meet with WCS teachers and listening to their concerns and suggestions. He said he’s in constant contact with the state leaders about the schools’ needs, but that it was even more powerful for the legislators to hear directly from teachers.

“I talk a lot about our need to value the teaching profession,” Elliott said. “Giving teachers a voice and allowing them to influence public policy is vital to providing our children with the best possible education.”

Outside of the legislative building, legislators were invited to meet teachers on the Halifax Mall. Herring said it was during this time that part of the attendees came together to discuss what all happened that day and what were topics that were talked about.

Keynote speakers — such as Gov. Roy Cooper — also took time to speak to the crowd.

Horine compared the event to the Women’s March she attended in Washington, D.C. She said this march was just as impactful and seeing all of the red was very powerful.

“It’s not going to stop with that one march,” Horine said. “Everyone’s going to keep going. The movement is there.”