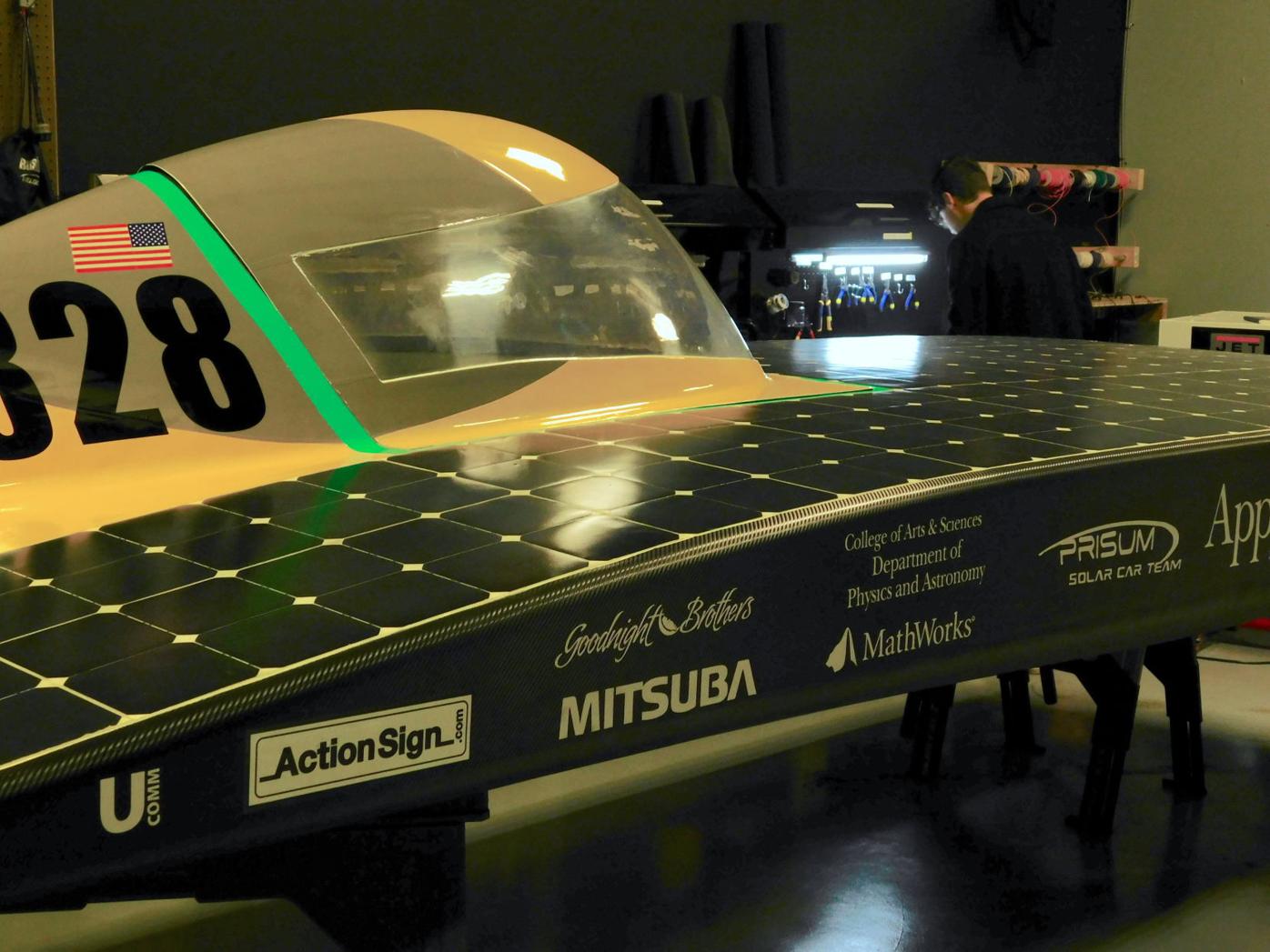 The team plans to continue using the first-generation model for training and testing purposes once the new Cruiser model is completed. 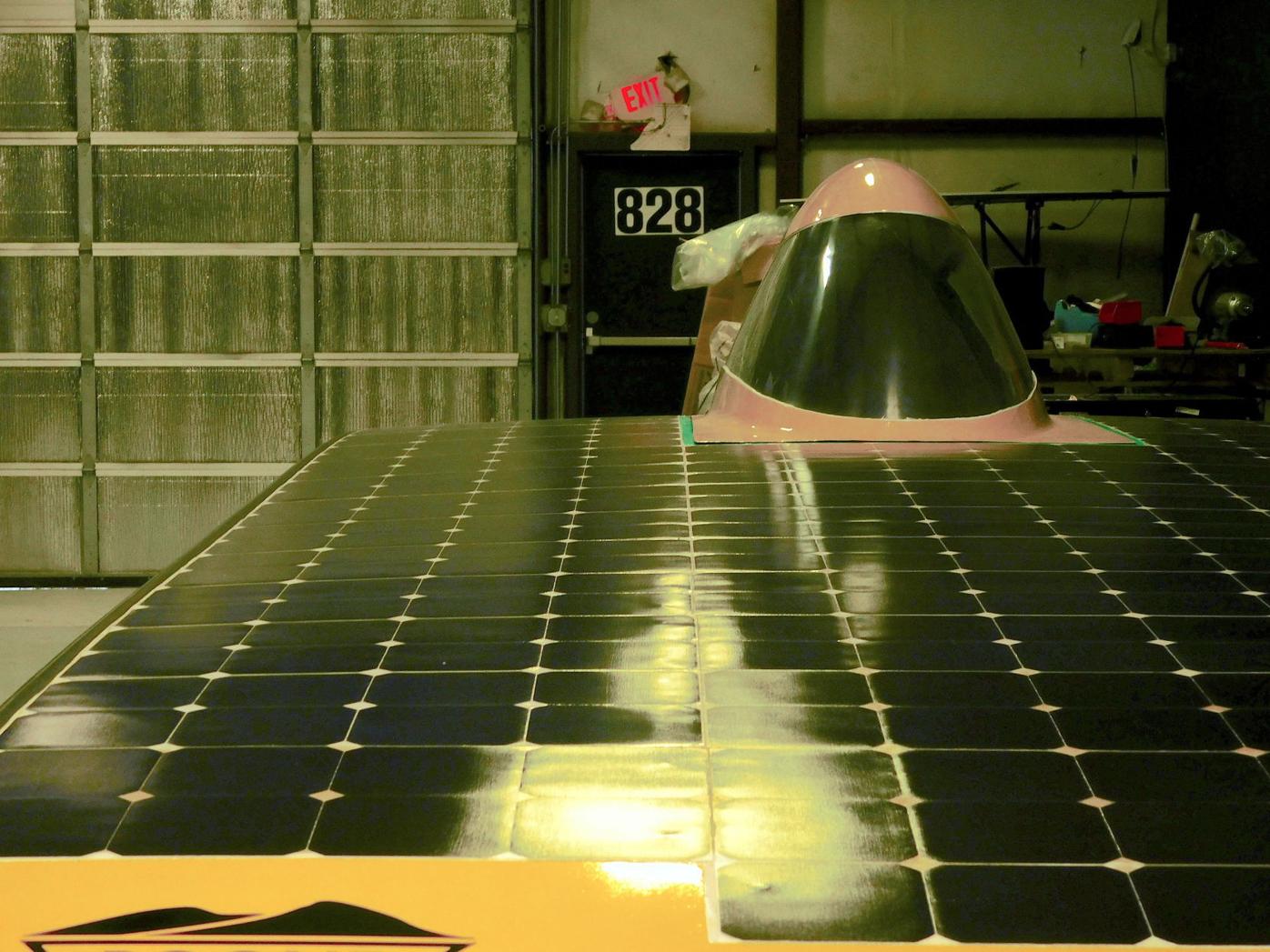 The first-generation vehicle – Apperion – got the team into second place on the leaderboard this past summer at the Formula Sun Grand Prix in Austin, Texas. 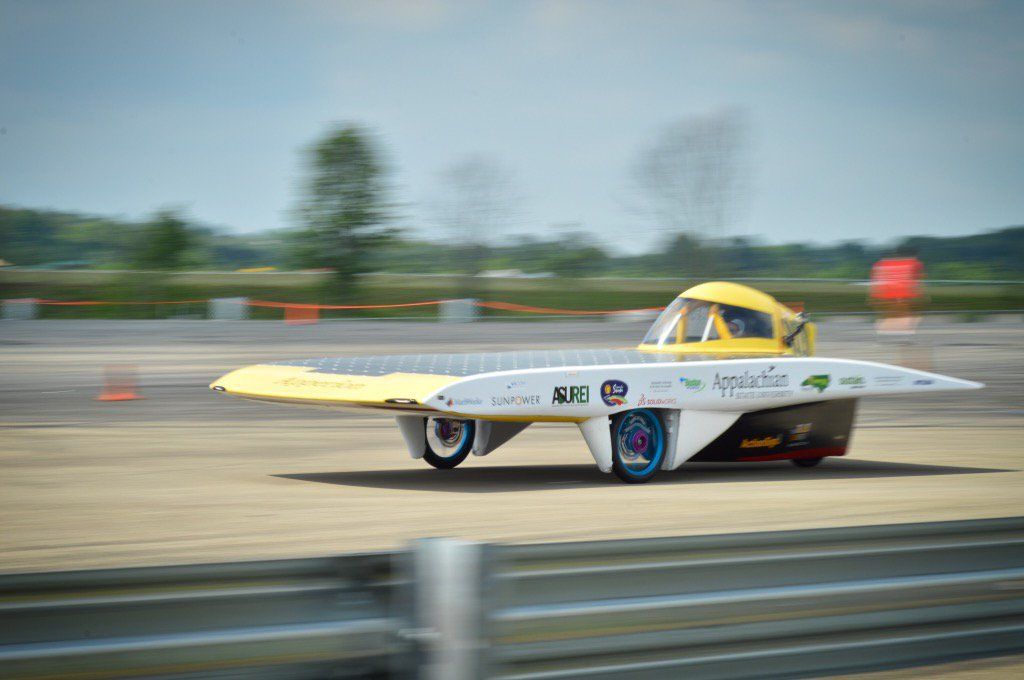 The Apperion is photographed in motion at the Formula Sun Grand Prix in Pittsburgh, Pa. 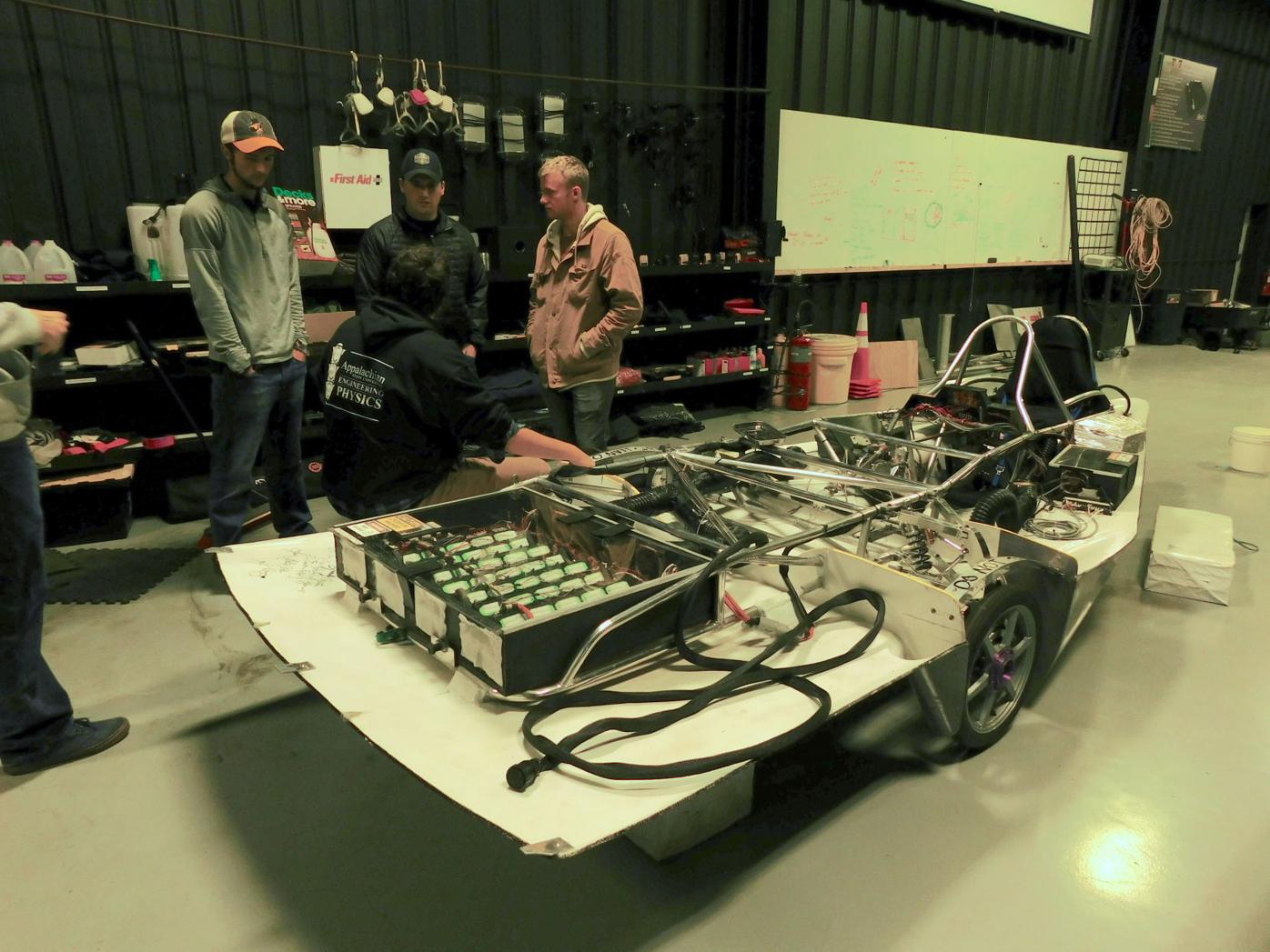 Members of the team review progress made during the week and talk about desired changes for the future. Pictured from left are Wyatt Bailey, Cody Waters, Dan Blakeley and James Furr.

The team plans to continue using the first-generation model for training and testing purposes once the new Cruiser model is completed.

The first-generation vehicle – Apperion – got the team into second place on the leaderboard this past summer at the Formula Sun Grand Prix in Austin, Texas.

The Apperion is photographed in motion at the Formula Sun Grand Prix in Pittsburgh, Pa.

Members of the team review progress made during the week and talk about desired changes for the future. Pictured from left are Wyatt Bailey, Cody Waters, Dan Blakeley and James Furr.

Pressured by a blooming reputation as well as changes to race regulations, the Appalachian State University Solar Vehicle Team is now finalizing designs for its second-generation vehicle.

The team began as a simple class project back in 2013. Now they’ve reached more than 70 members from a range of departments including physics, sustainable technology, business, music and computer science. Powered equally by photons as they are the energetic atmosphere of solar car racing, the team hopes to advance sustainable transportation technologies with the research they conduct along the way to the top of the leaderboard.

Team Sunergy made its presence known this past summer at the Formula Sun Grand Prix by coming in second place behind UC Berkeley. The surge of publicity that followed led to a large spike in interest, according to team Mechanical Director Cody Waters.

“Whether they’re just interested in cars, or sustainable tech, we’ve had tons of students reach out to us — all of them eager to help.”

Their first vehicle was intended for the Challenger Class, (emphasis on total efficiency) with only three wheels and just enough room for a single driver. Now the team wants to move into the Cruiser Class, which rewards efficiency but also requires an amount of practicality: room for passengers, grocery space, perhaps a sound system, and any other standard creature comfort expected in a consumer vehicle. But the transition to a Cruiser is not a trivial process.

“When it comes to racing, we feel very comfortable. We know how to plan, we’ve developed strategies, and we’ve learned a lot from other teams. But as far as the engineering and design of the new vehicle, we’re always flying by the seat of our pants. We’re not an engineering school, so it requires a lot of research. Sometimes that’s a handicap, but it can also be extremely helpful.”

Blakeley seems to embrace this extra work as an opportunity to rethink the norm, admitting, “A lot of other teams’ cars get over-engineered. It’s great that they’re trying to build certain systems from scratch, but when you’re putting hundreds of thousands of dollars into a project, if that new component fails, it can be a very big issue for that team.”

By simplifying systems and utilizing the electrical engineering skills of ASU’s physics graduate students, Blakeley believes that they can tap into their full potential.

“We’re keeping a good portion of the systems consistent with what worked for the first car. As far as innovation goes, the telemetry system and the user interface will be redesigned to display real-time data for the driver so they can make adjustments while they’re driving. We also want to transmit that data to the chase vehicle so that race strategists can use models to optimize the performance.”

Among the most exciting and ambitious of the new features is the added Smart-Grid Technology, which, Blakeley said, “uses the onboard battery in reverse to feed unused energy back into the grid. At someone’s home for instance, this could help stabilize the energy grid during peak hours like after work. Then the car charges itself either late at night, or very early in the morning while everyone is asleep.”

The new design will also rely on extensive weight trimming and increased aerodynamics.

There are plenty of obstacles ahead, but Blakeley seems to lead with a clear vision of their future.

But Team Sunergy has built more than just a vehicle at Appalachian State — they’ve built a community around the dream of a more sustainable future. They’ve fostered a movement at their school with a level of enthusiasm that, Waters said, “will someday rival that of the football team.”

“It’s a slightly different sport, but it comes down to this competition, it’s a race where we get to design the future.”