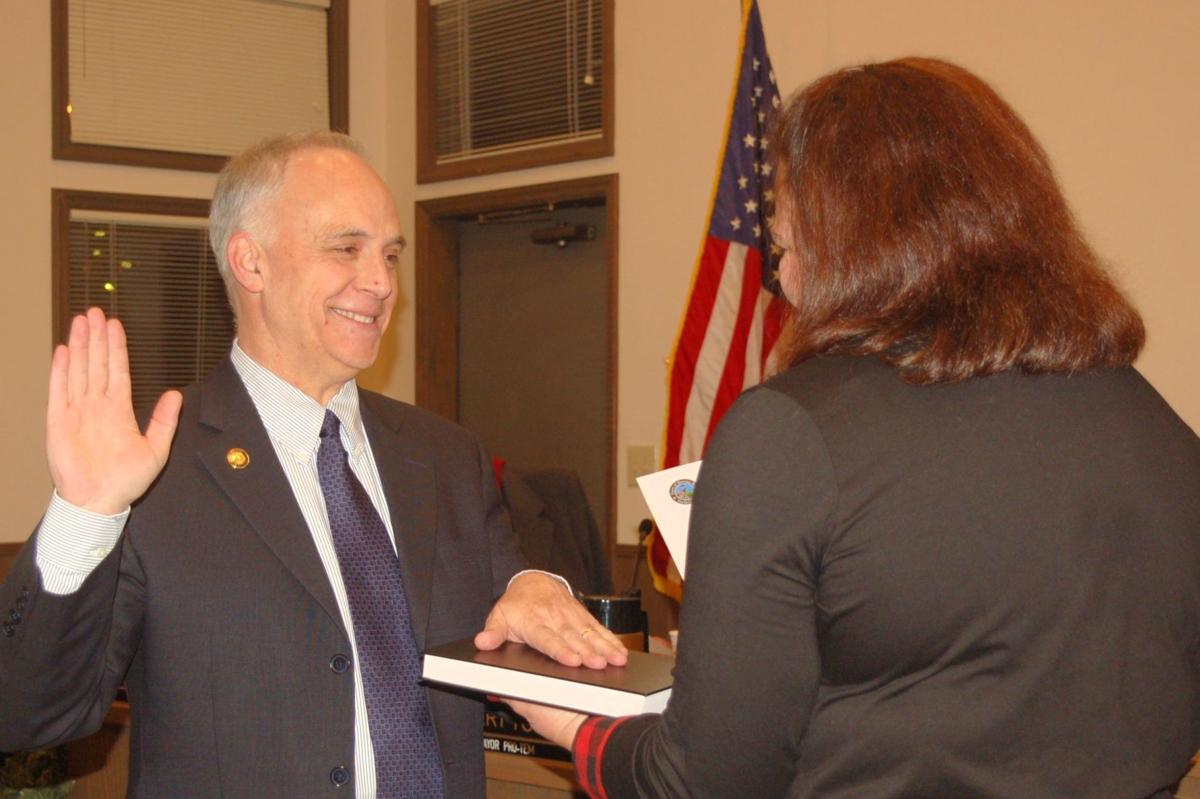 David Harwood, left, is sworn in for his first term on the Blowing Rock Town Council on Tuesday, Dec. 10, by Town Clerk Hilari Hubner, right. 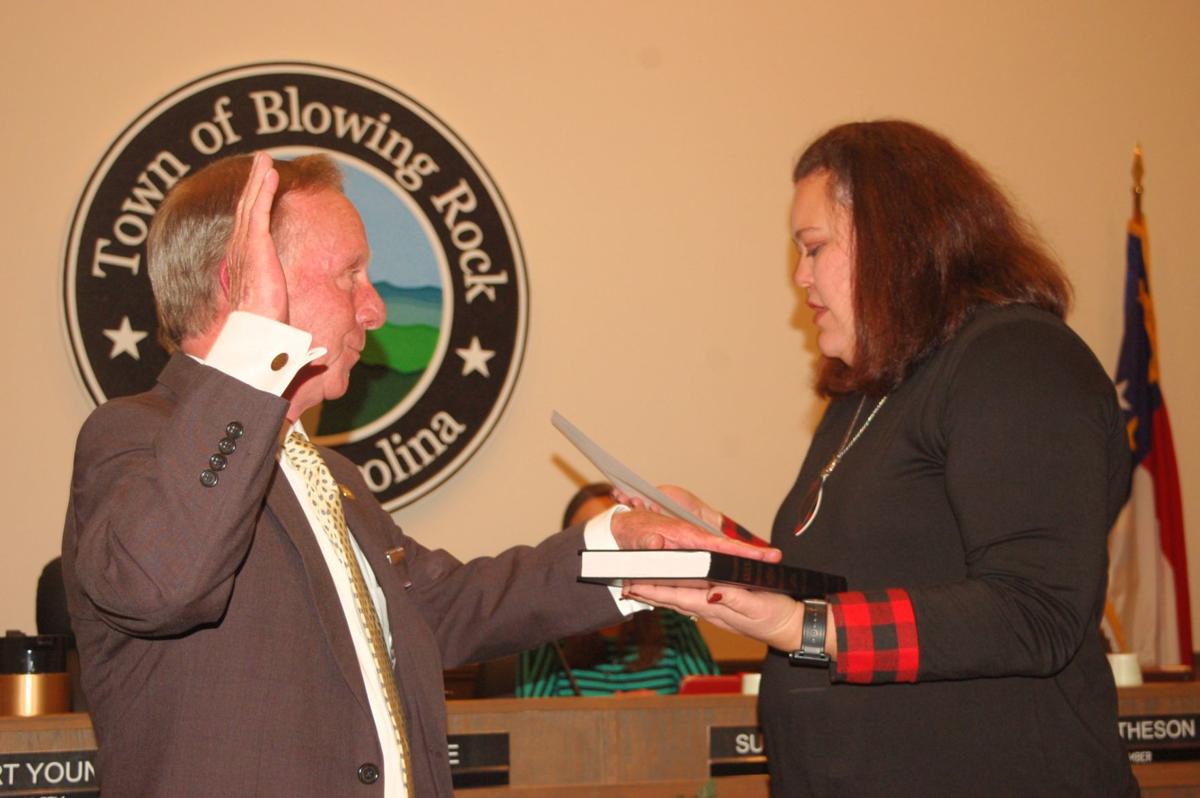 Mayor Charlie Sellers, left, is sworn in for his second term as mayor of Blowing Rock by Town Clerk Hilari Hubner, right, on Tuesday, Dec. 10. 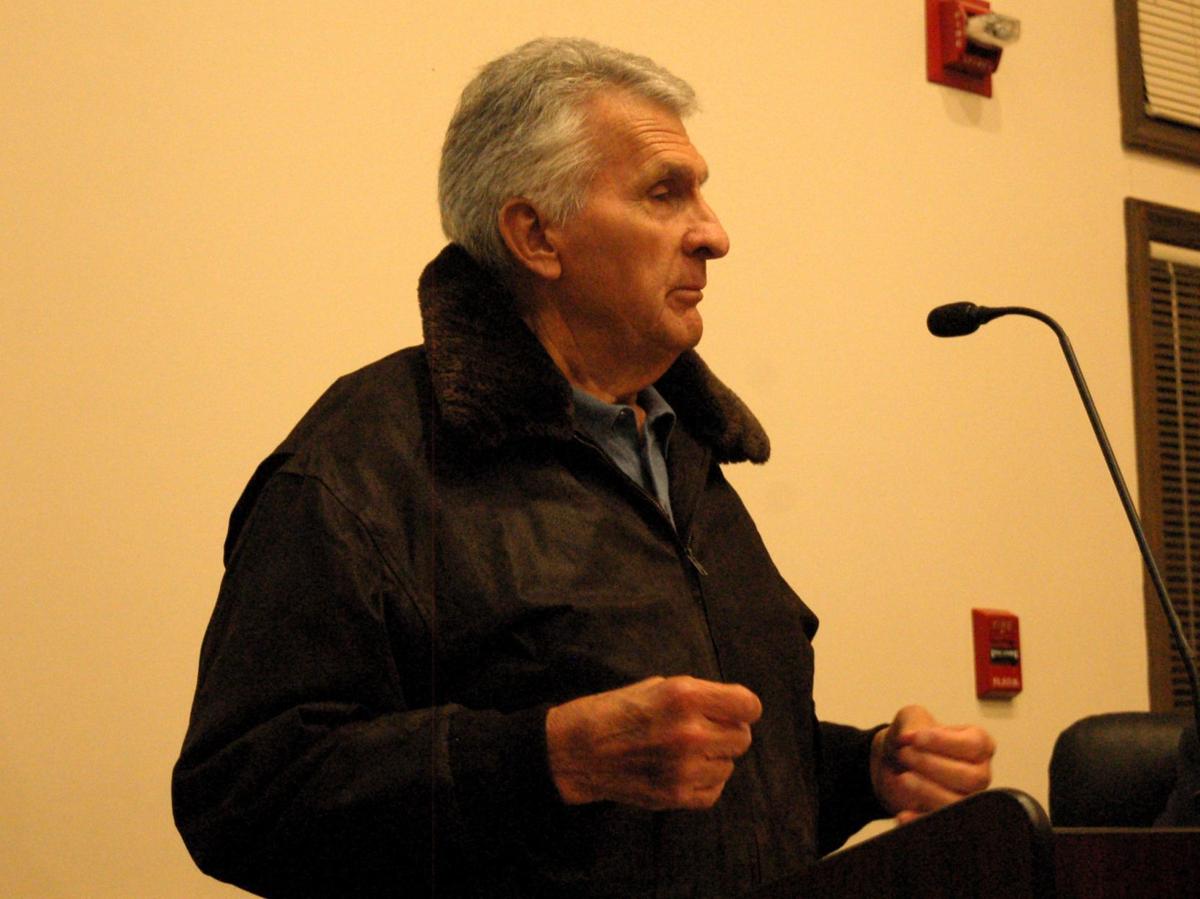 John Winkler talks to the Blowing Rock Town Council on Tuesday, Dec. 10, regarding his 12-room hotel proposal for Main Street. 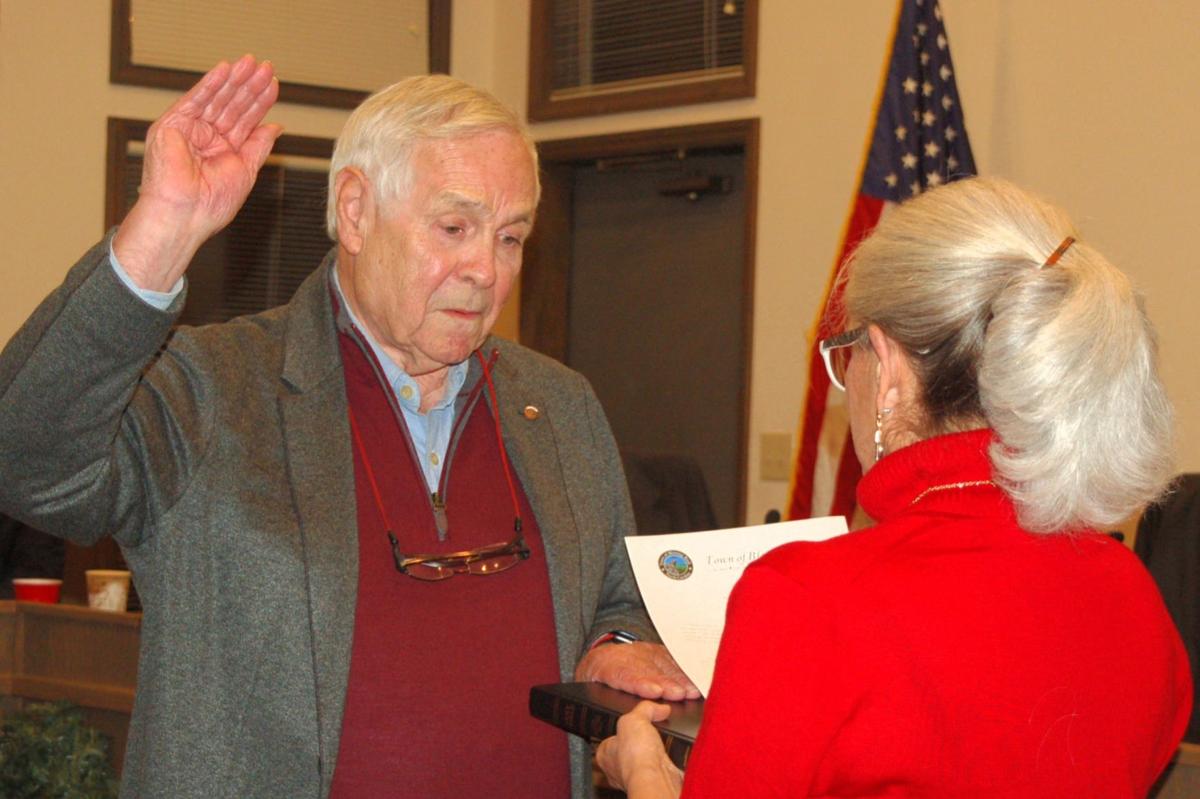 Albert Yount, left, is sworn in for a four-year term on the Blowing Rock Town Council on Tuesday, Dec. 10, by Greta Wilson, right. 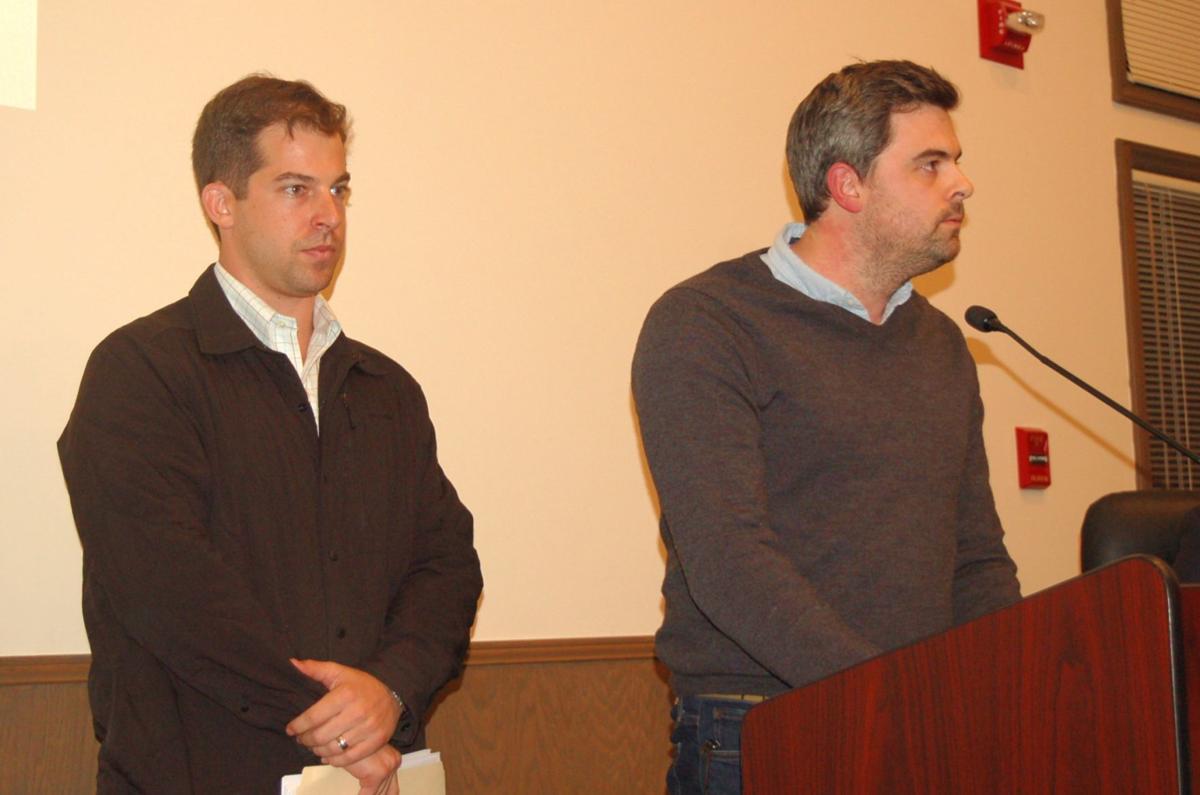 David Harwood, left, is sworn in for his first term on the Blowing Rock Town Council on Tuesday, Dec. 10, by Town Clerk Hilari Hubner, right.

Mayor Charlie Sellers, left, is sworn in for his second term as mayor of Blowing Rock by Town Clerk Hilari Hubner, right, on Tuesday, Dec. 10.

John Winkler talks to the Blowing Rock Town Council on Tuesday, Dec. 10, regarding his 12-room hotel proposal for Main Street.

Albert Yount, left, is sworn in for a four-year term on the Blowing Rock Town Council on Tuesday, Dec. 10, by Greta Wilson, right.

“It was a a joy to serve you all and serve with these people,” Steele said. “I’m sure glad I moved here 20 years ago.”

Steele was honored for his service to the town before departing. Following which, Harwood, Albert Yount and Mayor Charlie Sellers took their oaths of office.

Following the seating of the new council, Councilperson Sue Sweeting was voted to be the new mayor pro tem by a 3-2 vote over Yount, who has served as the previous mayor pro tem. Sweeting, Virginia Powell and Doug Matheson voted for Sweeting while Yount and Harwood voted for Yount.

Later in the meeting, the new-look council voted 3-2 to move the annual January retreat in town, instead of having it in Asheville as in years past. The retreat will take place Jan. 6-8, a Monday through Wednesday, at the Blowing Rock Art and History Museum.

Powell, Sweeting and Harwood voted in favor of moving the retreat to Blowing Rock while Yount and Matheson voted to keep the retreat in Asheville.

Yount has long been an ardent supporter of keeping the annual retreat in Asheville, saying he thinks it helps the council come together and away from potential distractions. Powell and Sweeting have said for two years they wanted to keep the retreat local to save the town’s money and be more transparent to the community.

The topics of the retreat, as well as the exact hours, will be determined by Town Manager Shane Fox by the week of Dec. 31, he said.

In a presentation to the council, Blowing Rock residents Sam Glover and Sam Hess spoke about an initiative to spruce up Memorial Park and its playgrounds in the next two years.

Glover said that the current park and playground is lacking in its appeal and is in need of significant change. Both men said the current playground and park’s state is something they have noticed as new dads and as lifelong Blowing Rock residents who said they spent hours in the park growing up.

“We want to show the community there’s a need for this,” Glover said.

In their presentation, Glover and Hess said a refurbished park and playground can increase nearby property values, promote health and wellness in the community and can be an economic driver among other positives.

The duo’s proposal was to accelerate $500,000 from the town’s capital improvement plan for the 2020-21 budget cycle and apply for a state Parks and Recreation Trust Fund grant. Another idea presented was to create a five-person residential committee to work with the town manager and Blowing Rock Parks and Recreation on the plans.

Hess said the plan would be to leverage up to $1.2 million for the construction of a new playground and refurbish Memorial Park.

The aim would be to start construction in the fall or winter of 2020, according to the presentation.

The council decided to hold off on creating a committee until they hear from town staff at the council’s retreat in January, but many noted they liked the ideas.

In a step toward having a new hotel in downtown, the council unanimously approved the conditional rezoning of the former Blue Ridge Motor Court property in the 800 block of Main Street, which includes the construction of a 12-room hotel on the site.

The project was proposed by local developer John Winkler, whose company The Winkler Organization owns and operates hundreds of student apartments in Boone and the boutique Inn on Cornish hotel that is nearing completion several hundred yards away from the new site.

According to the plans, the 12 rooms would each have two stories and include a kitchenette, a living area, two bathrooms, one shower, a patio and balcony. Six of the spaces would face North Main Street and the other six would face the back of the property toward Sunflower Lane.

The plans include 15 parking spaces and a new entrance into the property on Main Street, which Winkler said would be level to the road.

Powell asked if the property was subject to the 75 percent green space requirements that is in the code for certain units. Rothrock said this property is not subject to those rules as it has front-facing parking.

Sweeting initially contested the idea that the structure was a hotel and said when she called the Watauga County Health Department, they would classify the building as a condominium and it would thus subject to lesser safety restrictions than if it was classified as a hotel.

“I just don’t know if we need to approve it for a hotel when it’s a condo,” Sweeting said.

Rothrock said the specific use of the property as a hotel is one of the conditions the Blowing Rock Planning Board stipulated on its approval.

Winkler said that even though the plans don’t have a lobby or service desk, his organization’s maintenance department would take care of the guests’ needs. Winkler also said that he will own the property, but it will be run by his daughter, Amber, and her husband.

1BR CLOSE IN TO BOONE!