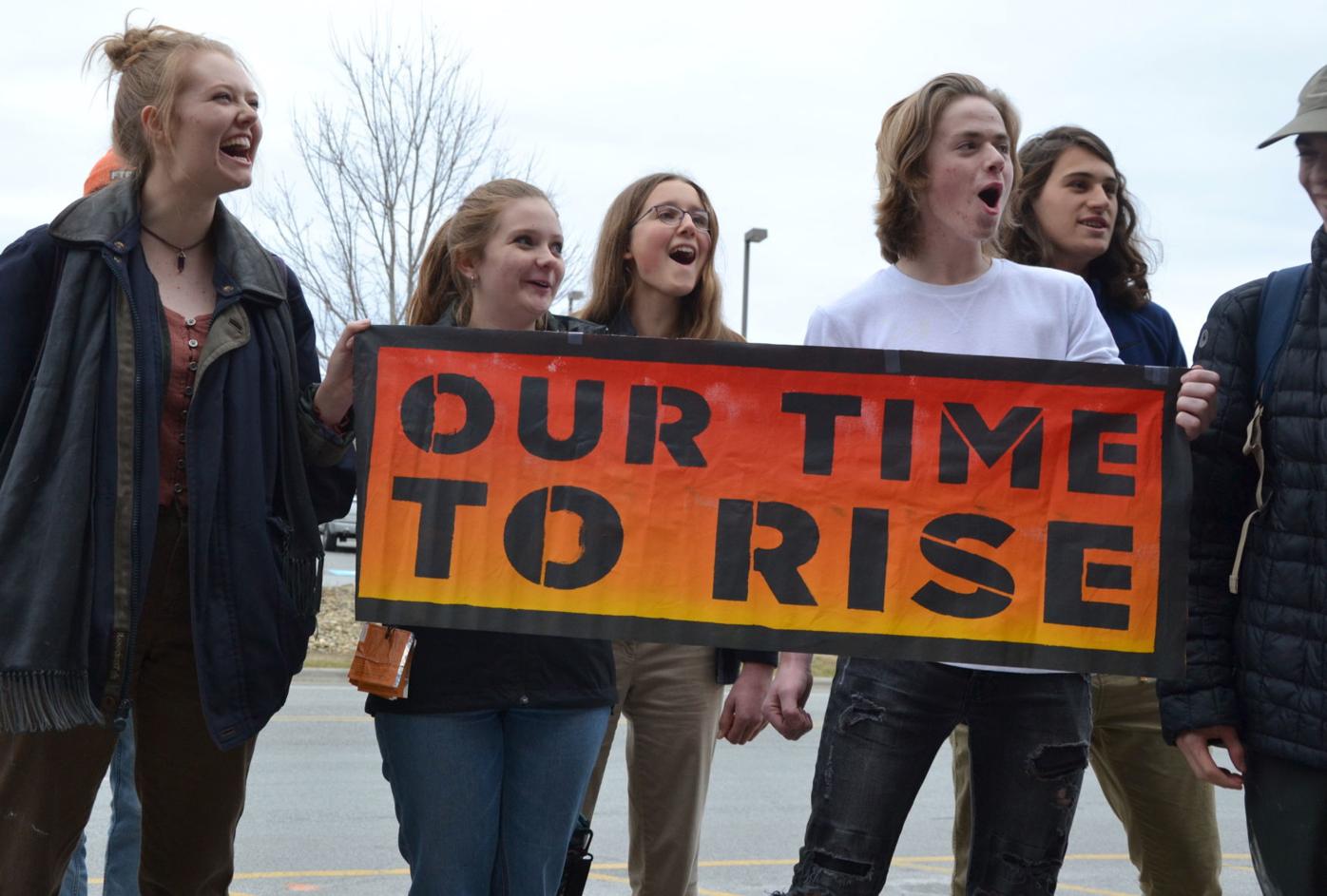 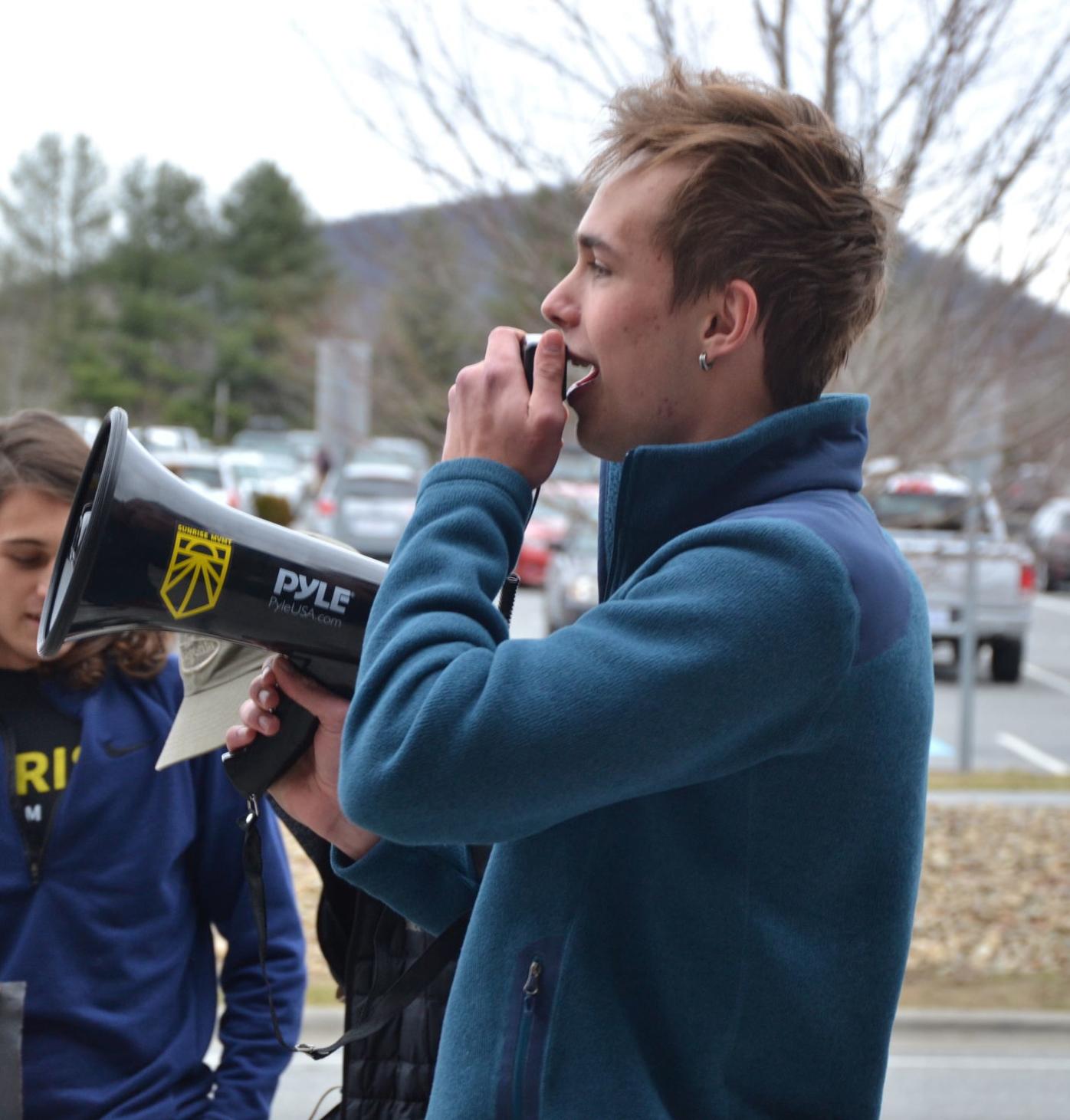 Galen Miller speaks to students during a climate strike on Dec. 6. 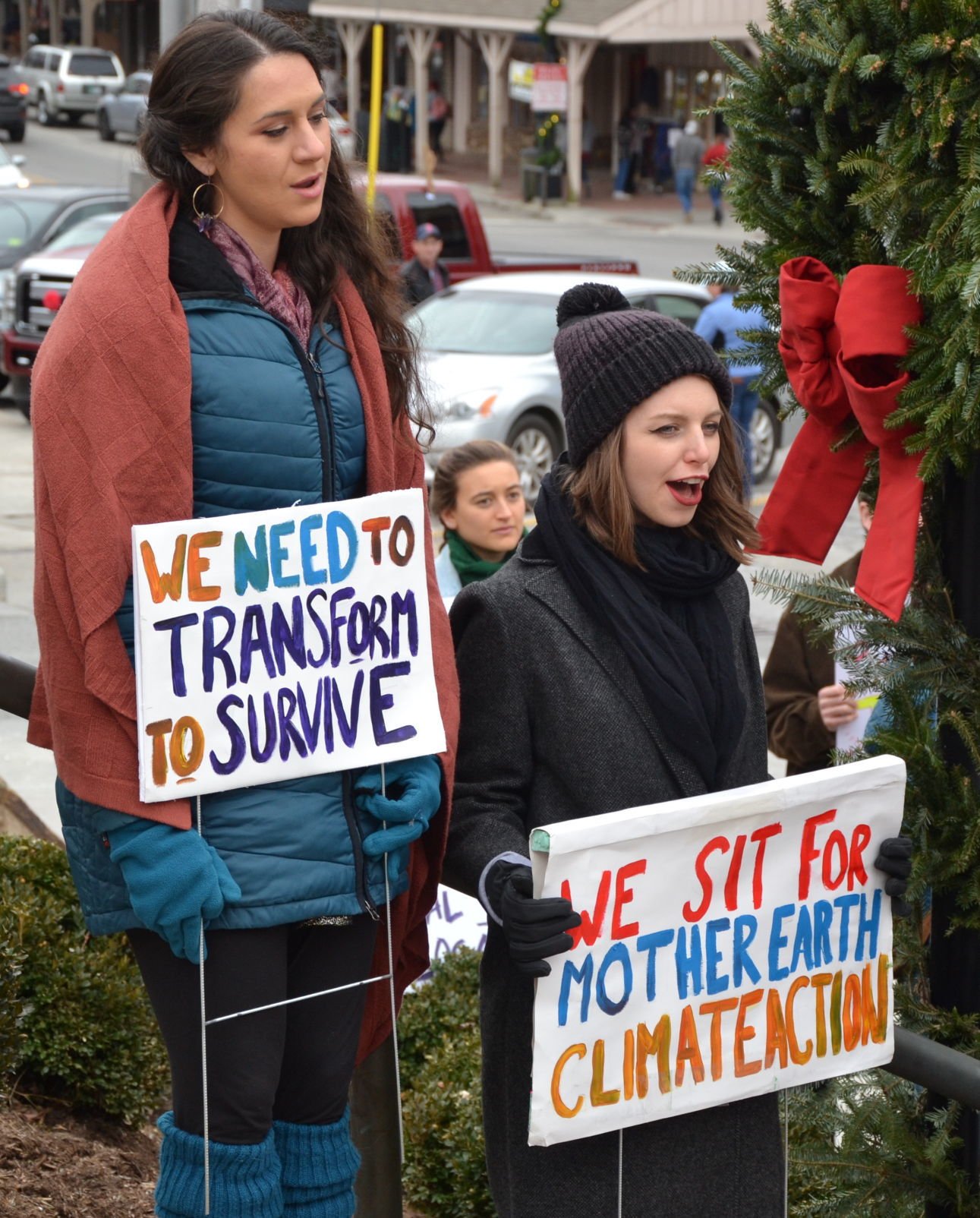 Beatrice Murray and Abby Helton attend a climate strike outside of the downtown Boone Post Office on Dec. 6. 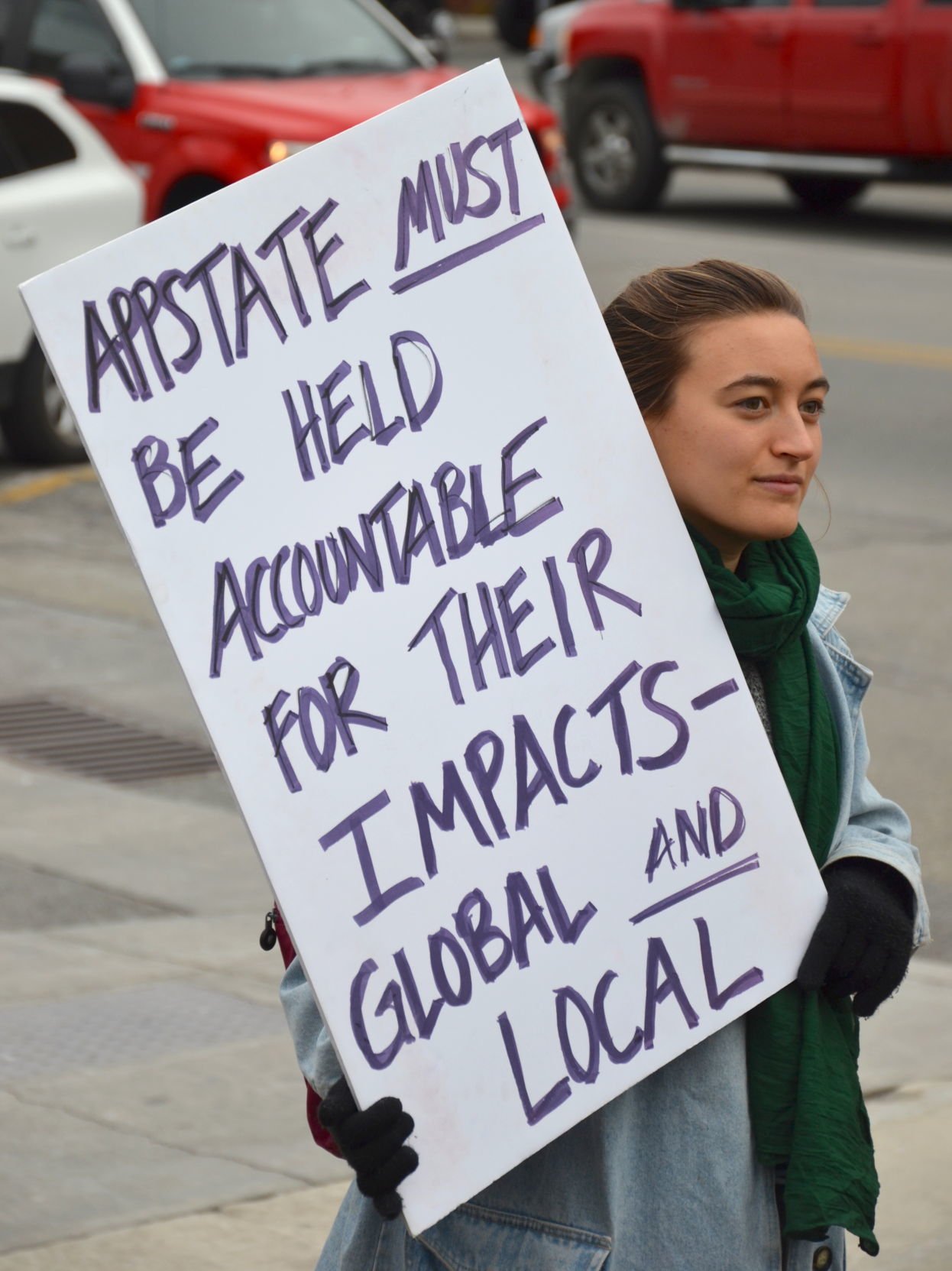 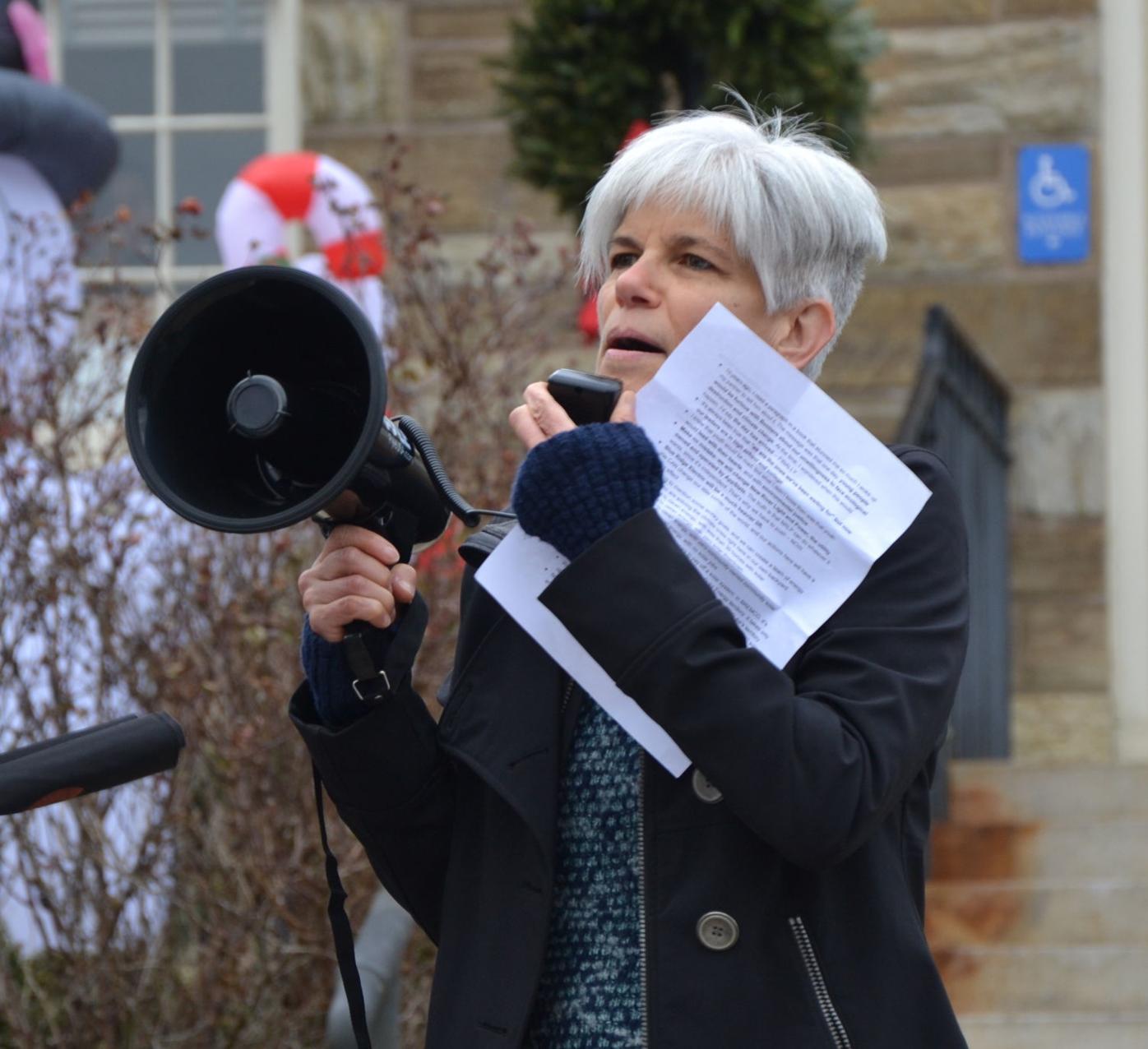 Nancy LaPlaca, a newly elected Boone Town Council member, speaks to a crowd on Dec. 6 for a climate strike.

Galen Miller speaks to students during a climate strike on Dec. 6.

Beatrice Murray and Abby Helton attend a climate strike outside of the downtown Boone Post Office on Dec. 6.

Nancy LaPlaca, a newly elected Boone Town Council member, speaks to a crowd on Dec. 6 for a climate strike.

BOONE — A group of Watauga High School students participated in an organized Climate Strike by walking out of school on Dec. 6 while other students across the nation did the same.

Students were called to action by the Sunrise Movement — a national group of young people asking peers to make climate change an urgent priority. WHS student Galen Miller, co-founder of the Boone Sunrise Movement hub, met with a crowd of students outside of the high school to rally against what he said was a lack of action on climate change.

“As young people, we say ‘enough,’” Miller said. “It’s time for us to take back our government through strong, unified, political actions.”

Sunrise Boone, along with the Sunrise Movement as a whole, advocates for the Green New Deal — a plan to move the American society to 100 percent clean and renewable energy by 2030. WHS students who are eligible to vote were encouraged to vote for political officials who championed the Green New Deal.

“We’ll show them that if they don’t do what we need, we’ll vote them out,” Miller said.

Sunrise Boone meets monthly, and notifications about meetings can be found on the group’s Instagram feed at SunriseBooneNC or by contacting sunriseboone@gmail.com.

Worried about the environment? Check out the woman that clear cut here property off Shull’s Mill Rd...near hound ears. It looks like an act against God!

Wow. Now we have students and teachers parading as atmospheric scientists. He teaches, try teaching them how to employ critical thinking rather than liberal ideology indoctrination. Talk about their cellphones, iPods, and glutinous consumerism.

BFrank - They may not be scientists yet, but I would dare venture to say they are very capable of recognizing proven facts and the truths of global climate change. They and those like them will make the needed changes in America that you and so called critical thinkers like you have failed to make. The dinosaurs are dead and the times they are a changing! You need to change your critical thinking or risk being dinosaur of the future! It's not so hard as you might think! Go kids! Go!

Your attempt at contempt is hampered by your inability to form a halfway coherent thought, coupled with a limited vocabulary. Glutinous? Yes, I too, try and avoid bread when possible, but I fail to see the connection here...

Get back to class for more indoctrination

Andy - You mean like that on FAUX NEWZ, the far right entertainment news channel?

Go crawl back under your rock, Andy. Your consistent need to come on here anytime there's a climate-related story involving students just so you can attempt to insult them is truly disturbing.