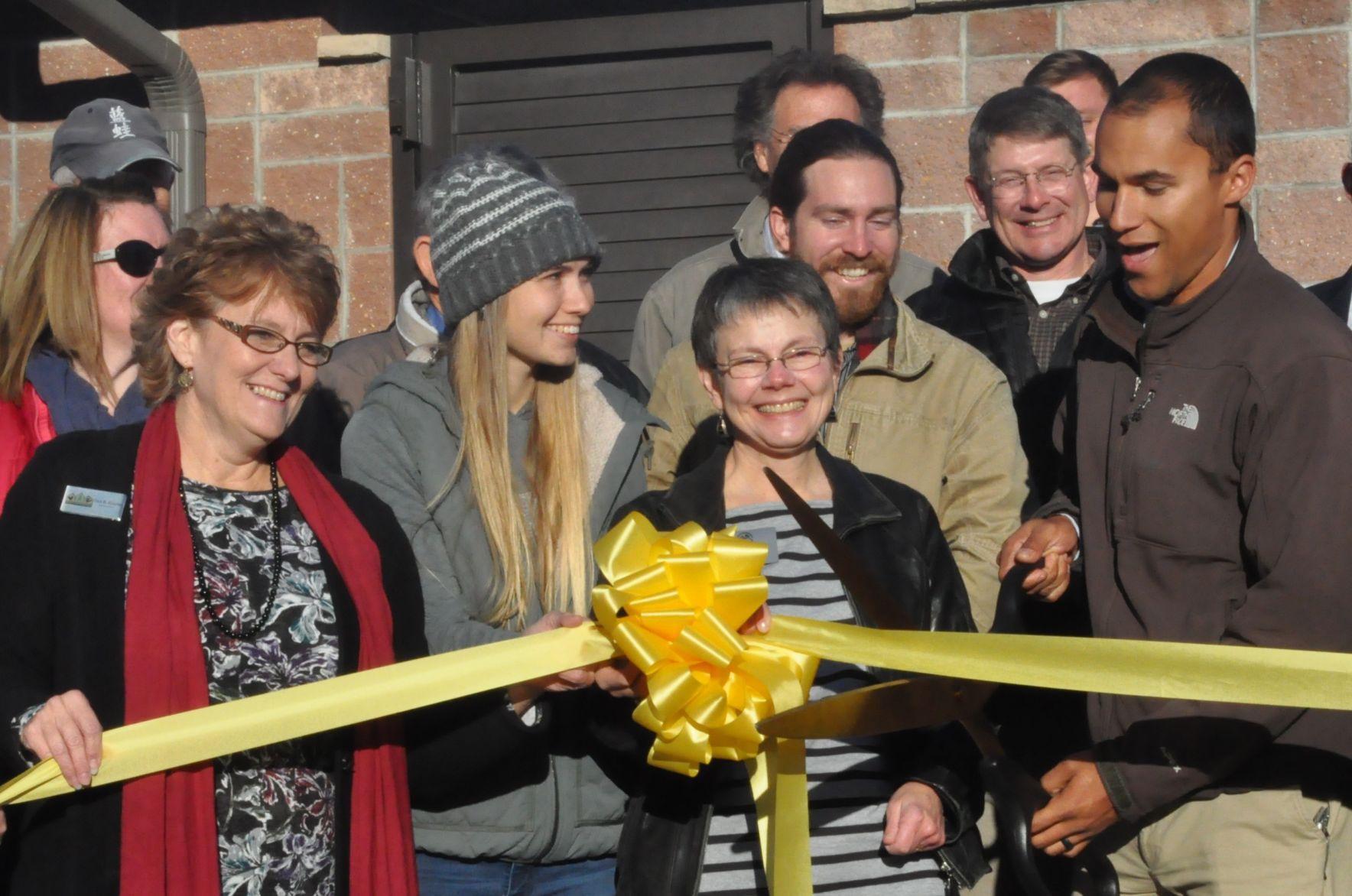 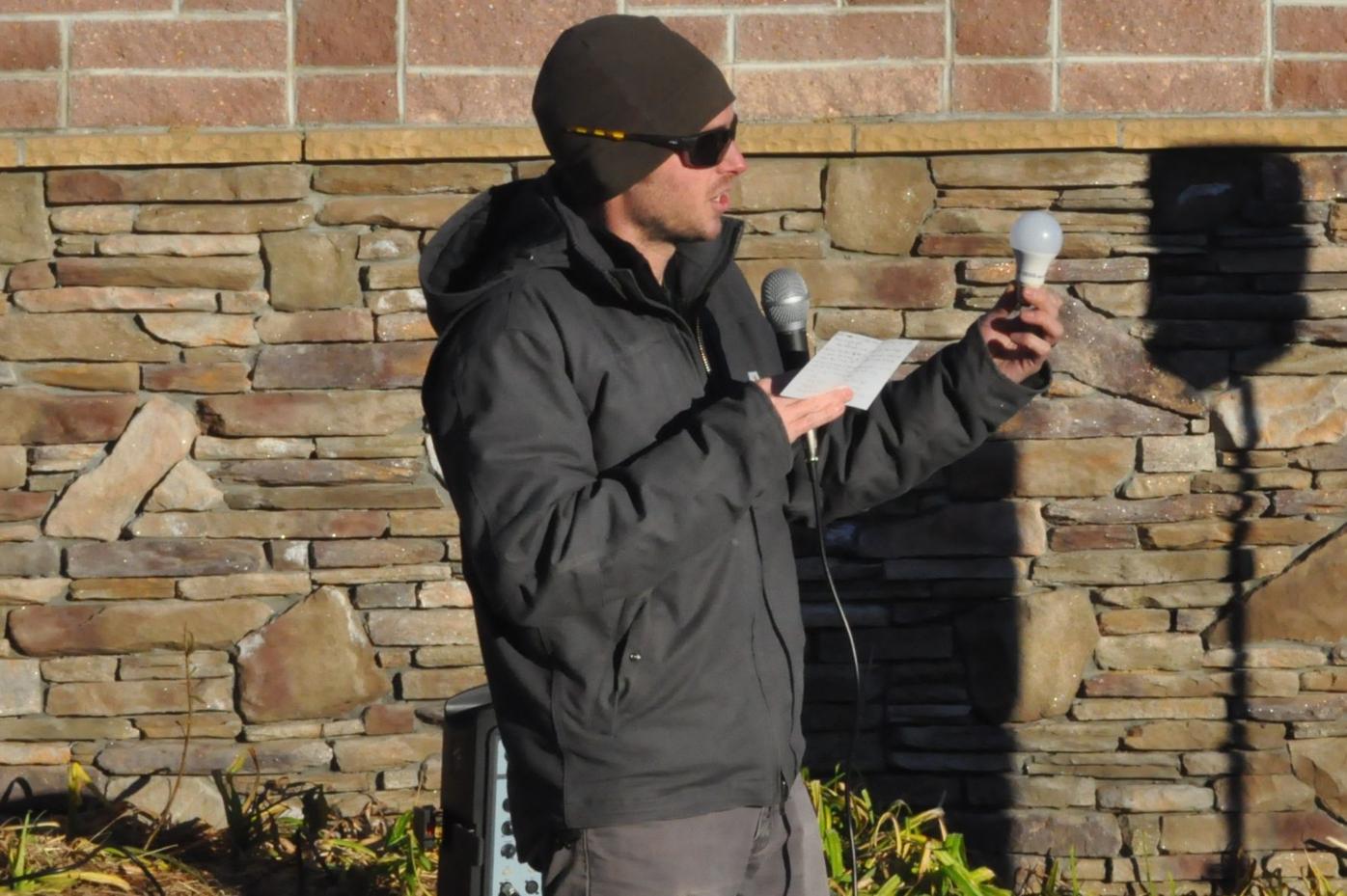 Zach Sprau holds up a 10-watt LED light bulb, noting the new solar energy grad at Hospitality House can power 1,300 of those bulbs at once. 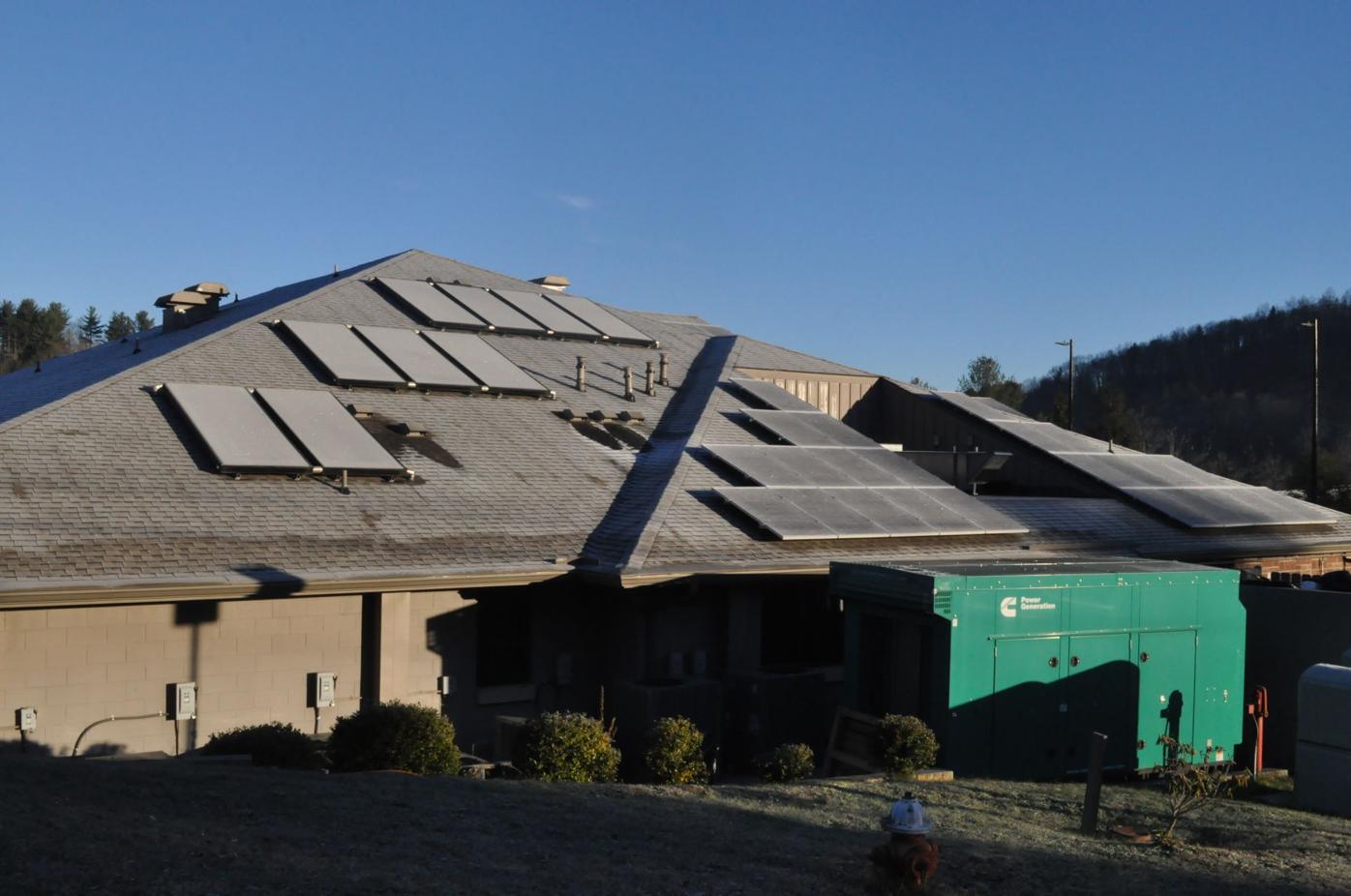 Still covered with a layer of frost, the new photovoltaic solar panels on the roof of the Hospitality House. 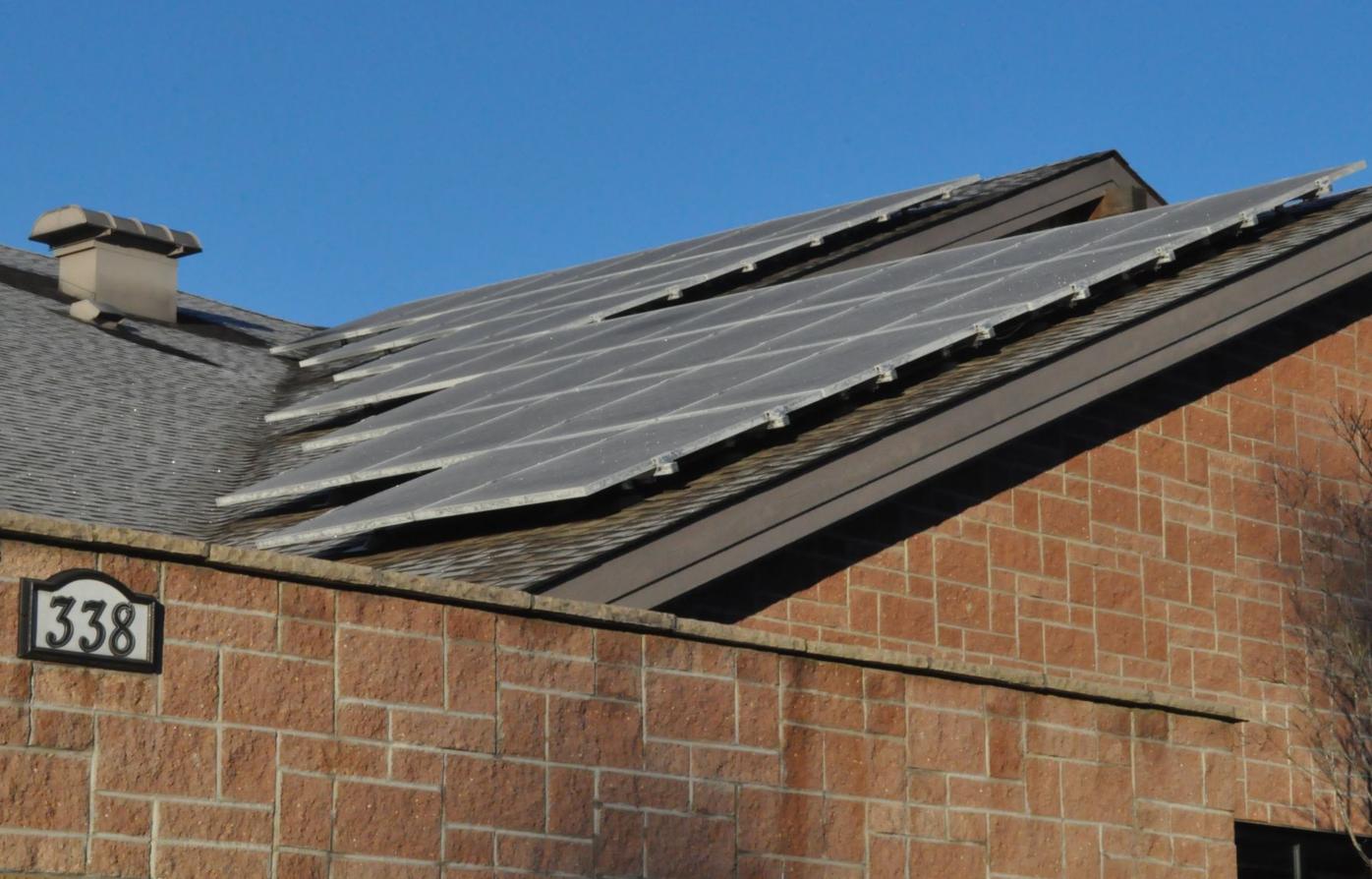 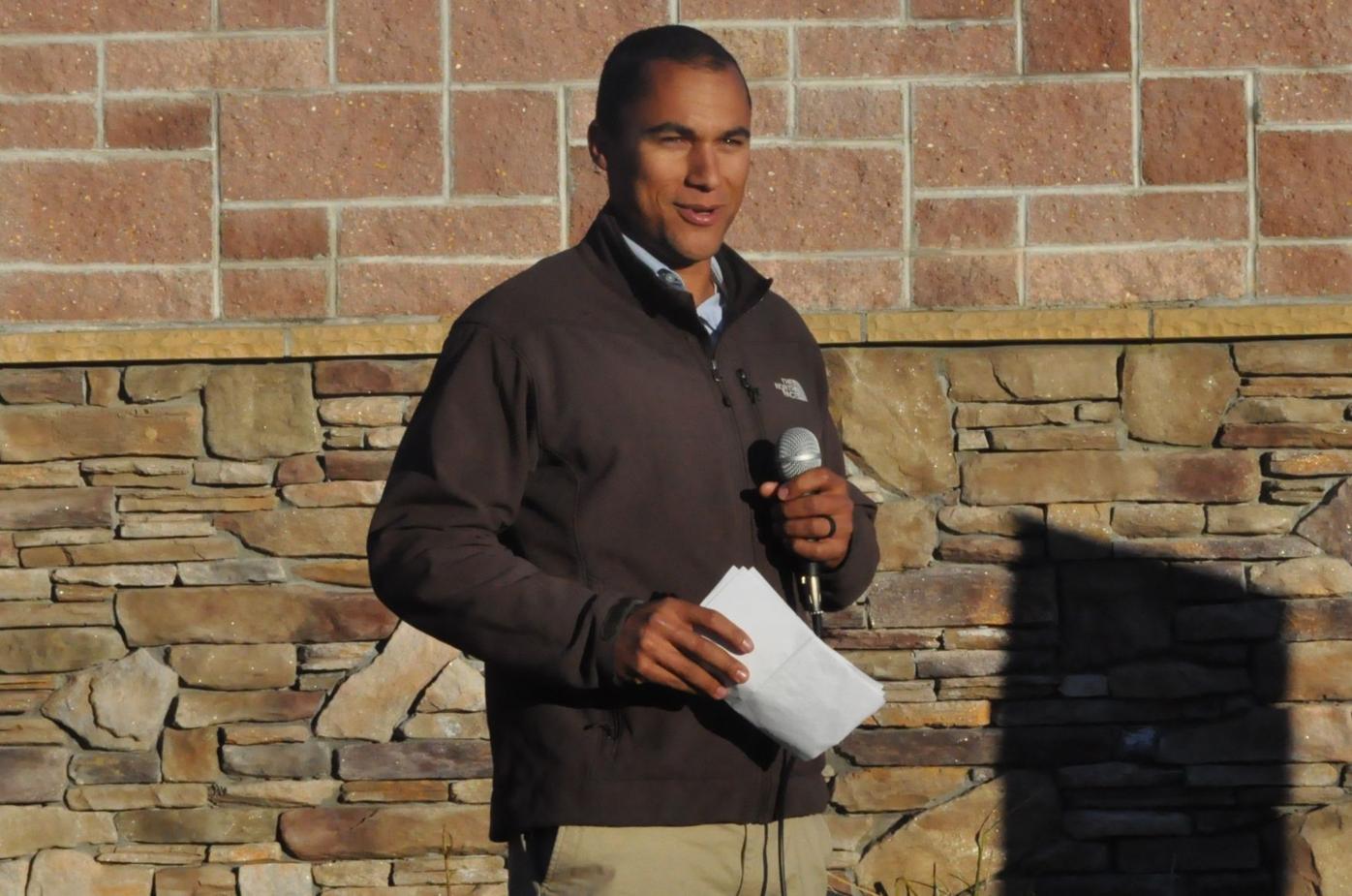 Zach Sprau holds up a 10-watt LED light bulb, noting the new solar energy grad at Hospitality House can power 1,300 of those bulbs at once.

Still covered with a layer of frost, the new photovoltaic solar panels on the roof of the Hospitality House.

The Hospitality House of Boone cut the ribbon early Tuesday morning on its new solar panel system with 54 photovoltaic panels, becoming what it says is the first homeless services facility in the United States with solar power.

“This is the perfect marriage of the business community, the university community and the nonprofit community,” Hospital House Director of Development Todd Carter said. “In addition to respect, dignity, compassion and integrity as our core values, we also believe in sustainability of life, community and the environment.”

The 54-panel system creates at most 13 kilowatts of electricity at once, which Zach Sprau — project manager with United Solar Initiative, a solar-energy solutions company based in Chapel Hill that worked on the project — noted can power 1,300 10-watt LED light bulbs.

“Every time that this system produces enough energy to power 100 (lightbulbs), the Hospitality House gets a credit, which then decreases their electric bill,” Sprau explained.

Tina Krause, the executive director of the Hospitality House, said the savings should come to about 20 percent a month on the electric bill, which she noted can be “a little astonishing” in January and February, and how it can free up funds to help with the core missions.

“That translates to 21 additional people being able to come in, each month, and receive services,” Krause explained, noting that the kitchen makes between 11,000 and 12,000 meals every month.

Sprau noted the United Solar Initiative funded “a majority” of the project, working with panels originally donated by Strata Solar, based out of Chapel Hill. Hospitality House noted that USI raised $35,000 with Appalachian State University’s Appalachian in the Community Together service group committed to $5,000.

Depcom Power, a solar energy solutions company based out of Arizona, also donated a large sum of money to make the project happen, Sprau noted, as well as Enterprise Rent-a-Car, which provided a grant. City Electric Supplies was credited with supplying the tools needed to install the panels and Schletter, whose American headquarters is in Shelby, provided the infrastructure for the panels to stay on the roof. Sprau also noted that Brian Revell with Sunvolt Electric and Renewable Energy provided his own expertise to the project.

“This project is so special to me because of all the help I received along the way,” Duke said. “This will support us for the next 50 years.”

Duke noted that this particular solar energy system is only one of three like it in America. Duke also thanked several groups in attendance, including United Solar Initiative, Sunvolt Renewable Energy and Electric, ASU’s ACT service group and Blue Ridge Energy.

Sprau said the project came about “a few summers ago” when Duke invited him over to the Hospitality House and shared with him the ideas for putting photovoltaic panels on the roof.

Sprau said when he got involved with United Solar Initiative, which normally works in third-world countries, they broached the idea of domestic projects, and Sprau’s Hospitality House idea took off in 2016.

Kate Johnson with ASU’s ACT service group spoke about how the group raised $20,000 through its “Don’t Throw It Away” and bake sale events, with portions of those funds going to the Hospitality House.

“Even we can’t believe it, and we run it,” Johnson said of the dollar amounts raised.

Tomiwa Olufolabi with ASU’s Renewable Energy Initiative and Student Government Association presented a donation to Carter for $92.59 for a future solar panel as a match to what ACT had given. Carter explained that when the food pantry is expanded, there will be more roof space for more solar panels, so the work isn’t done yet.

Krause said that the building sends a message to the community that you can provide services in a way that is part of the community and “making a dollar stretch.”

“We always work to keep these doors open,” Krause said of the building. “We’ve worked so hard to make our building a place where we can provide warmth, a home and provide food and make it available for those who come in that door.”

David Jackson, president of the Boone Area Chamber of Commerce, noted that Hospitality House has been a pillar for philanthropic activity in the High Country for years and is in line with what the town of Boone and Watauga County is looking for in terms of green initiatives.

“This is a great step forward for one of our nonprofits to say ‘We’ve done our part, now who’s next?’” Jackson said.