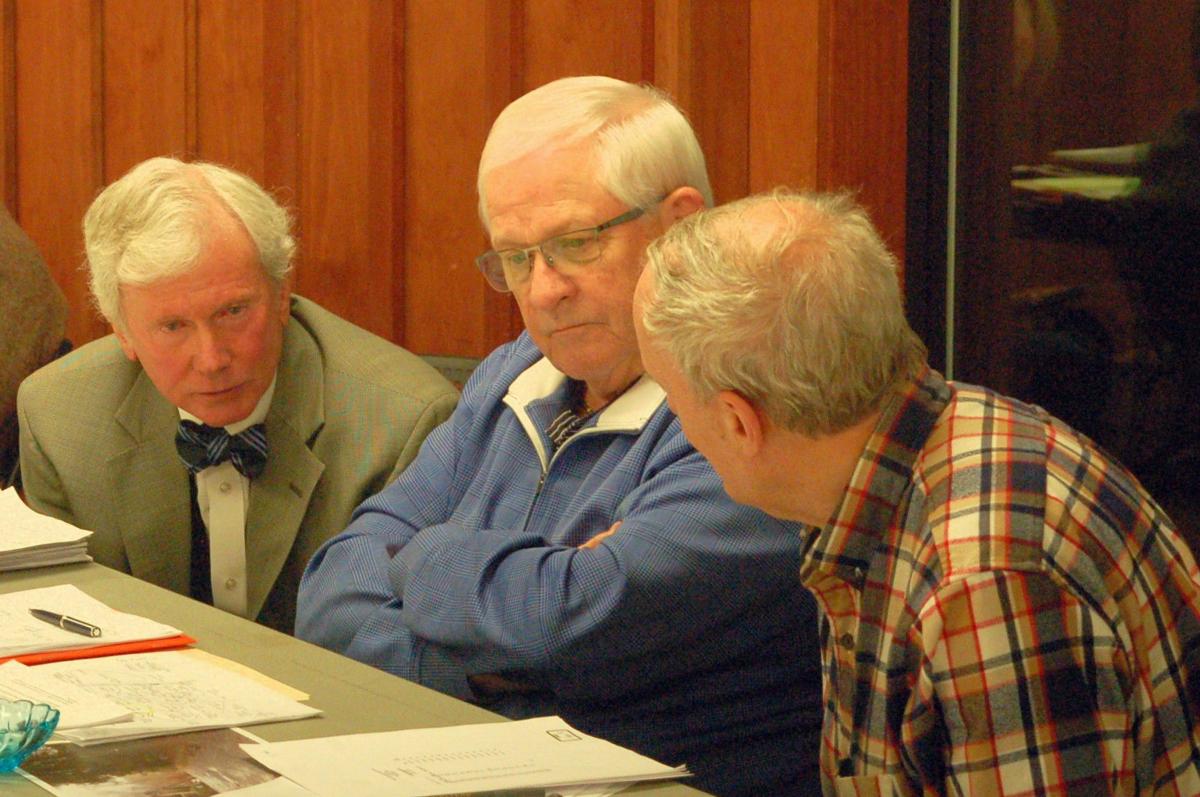 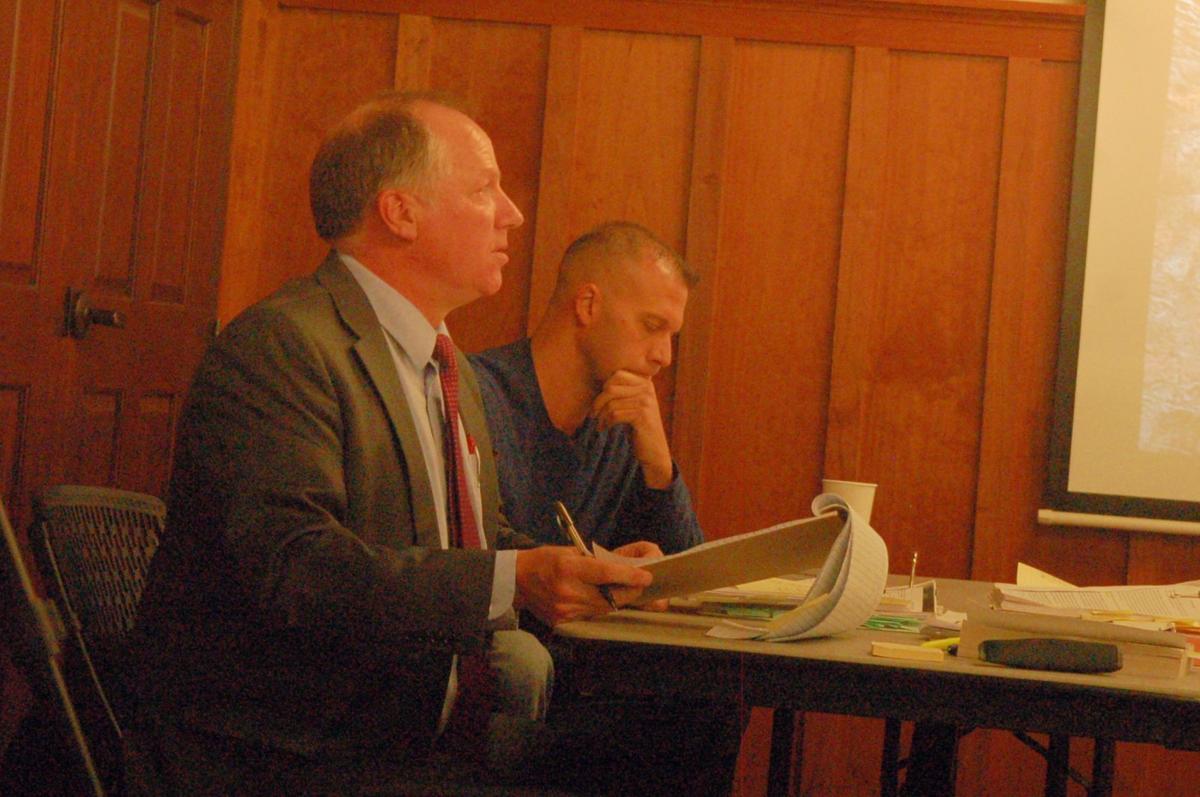 Attorney David Pokela, front, and his client, Chad Frazier, back, listen during the Blowing Rock Board of Adjustment’s Wednesday, Feb. 19, hearing on Frazier’s property. 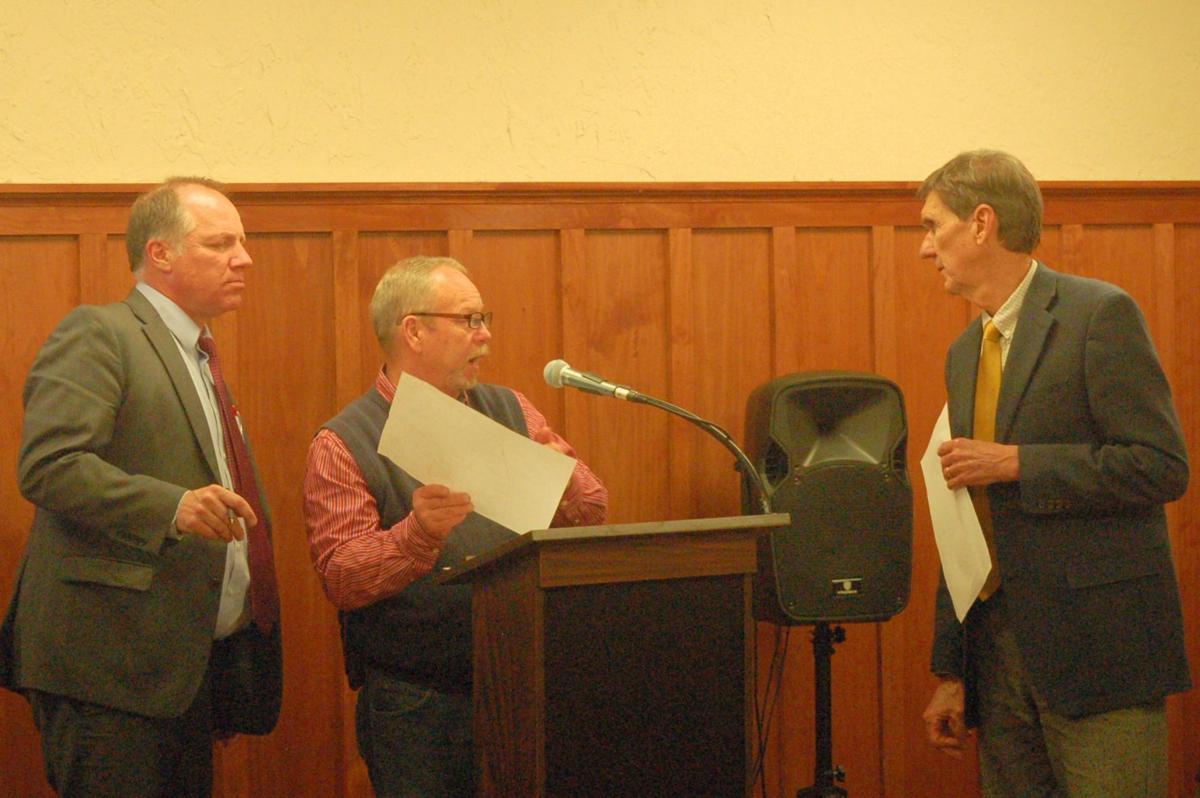 Doug Matheson, center, points to a map during his testimony during a Blowing Rock Board of Adjustment hearing on Wednesday, Feb. 19. Also pictured are attorneys Allen Moseley, right, and David Pokela, left.

Attorney David Pokela, front, and his client, Chad Frazier, back, listen during the Blowing Rock Board of Adjustment’s Wednesday, Feb. 19, hearing on Frazier’s property.

Doug Matheson, center, points to a map during his testimony during a Blowing Rock Board of Adjustment hearing on Wednesday, Feb. 19. Also pictured are attorneys Allen Moseley, right, and David Pokela, left.

BLOWING ROCK — Short-term rental violations levied against a Blowing Rock residential neighborhood dwelling were unanimously upheld by the Blowing Rock Board of Adjustment on Wednesday, Feb. 19, after two dates of hearings.

After more than 11 hours of evidence and arguments were presented on Jan. 23, 2020, and Feb. 19, a total of 43 findings of fact and 16 conclusions read by interim Chair E.B. Springs were unanimously agreed upon by the five-member board, which found in favor of the town.

The hearing concerned Chad Frazier, who has owned 163 Wilmot Circle since June 2016, and whether to overturn Blowing Rock Planning Director Kevin Rothrock’s final notice of violations issued to Frazier in 2018.

In his closing arguments, Moseley tried to convince the board of adjustment that it’s clear that renting 163 Wilmot Circle is not a permitted use and that the 1984 and 2000 town codes were valid and prohibited short-term rentals at the property in question.

Frazier and his lawyer David Pokela of Greensboro argued that the “ambiguity” of the 1984 and 2000 town code amendments meant that the only town code changes that could apply to Frazier were the ones made in 2018-2019, thus invalidating the town’s argument in the notice of violations.

“Despite the best efforts of the 2000 ordinance, it did not regulate short-term rentals,” Pokela said.

Pokela claimed that there was no substantive testimony that the property lost its grandfathered status.

“There was evidence from folks making observations from out in the streets, not what’s really going on in the units,” Pokela said.

The property is zoned R-15, which according to the Blowing Rock town code is “intended to be a low-density residential district in which single family residences constitute the predominant use.” Multi-family dwellings and mobile homes are prohibited in the R-15 district, according to the town code.

However, 163 Wilmot Circle has been used for multi-family housing since before zoning was established in Blowing Rock, according to the minutes of a prior hearing, and thus was grandfathered in as a legal non-conforming use, Rothrock previously said.

Prior to Frazier’s purchase, the property went through periods in the ‘80s, ‘90s and 2000s where up to five different apartments were rented for periods of six to 12 months at a time by previous owner Dan Wilson, who lived in a sixth unit, according to the findings of fact. Later, the five long-term rentals were converted into three units.

In the 2010s, the property was not used for long stretches of time, including periods in excess of 180 consecutive days, Moseley argued, when Frazier purchased the property in 2016.

The hearing was the second for Frazier. In January 2019, the Blowing Rock Board of Adjustment first heard the case. After a two-hour hearing, the adjustment board upheld Rothrock’s decision. On appeal to Watauga County Superior Court, according to Rothrock, the parties mutually decided in mediation to start the adjustment hearing process over again, since the 2018-2019 short-term rental ordinance changes had not been finalized by the town.

The second hearing started Jan. 23, 2020, with a five-hour session in which Rothrock and Kevin Wilson, son of Dan Wilson, were called as witnesses.

The continuation of the hearing on Feb. 19 had Rothrock resume his testimony that was started Jan. 23. Intervening in the case were neighbors Jack and Morgan Horner, represented by their attorney Jonathan Green of Boone, who were arguing in favor of the notice of violations being upheld.

Kim Jenkins Rogers, owner of Jenkins Realtors, and current town of Blowing Rock employee and former property manager Tammy Bentley both testified for the town on managing the property from the ‘80s until 2004, when Wilson decided to evict the tenants and renovate. Rogers said that the leases went at a minimum six months and that the units weren’t viable to be rented as vacation rentals at the time in her professional opinion. Neighbor and current Blowing Rock Councilperson Doug Matheson also testified on behalf of the town on his experiences as a neighbor to the Wilmot property.

Neighbor Jonathan Commander, who is in Florida for the winter, testified via phone about his time in Blowing Rock from May 2010 to December 2015, saying the property in question was “definitely not a short-term rental situation.”

“It got so overgrown you couldn’t even see the ‘for sale’ sign,” Commander said.

Commander testified that in recent years, he’s noticed a lot of different vehicles and that the road going to the property in question is now in bad shape.

Rothrock testified about the zoning and permitting history of the property and the recent notice of violations letters for the short-term rentals, which Frazier admitted had been ongoing. Rothrock said that based on his interpretation of the town code, that the property in question would require new zoning to comply with town code.

Rothrock said that once the written decision is delivered, the appellant has 30 days to appeal to Watauga County Superior Court.