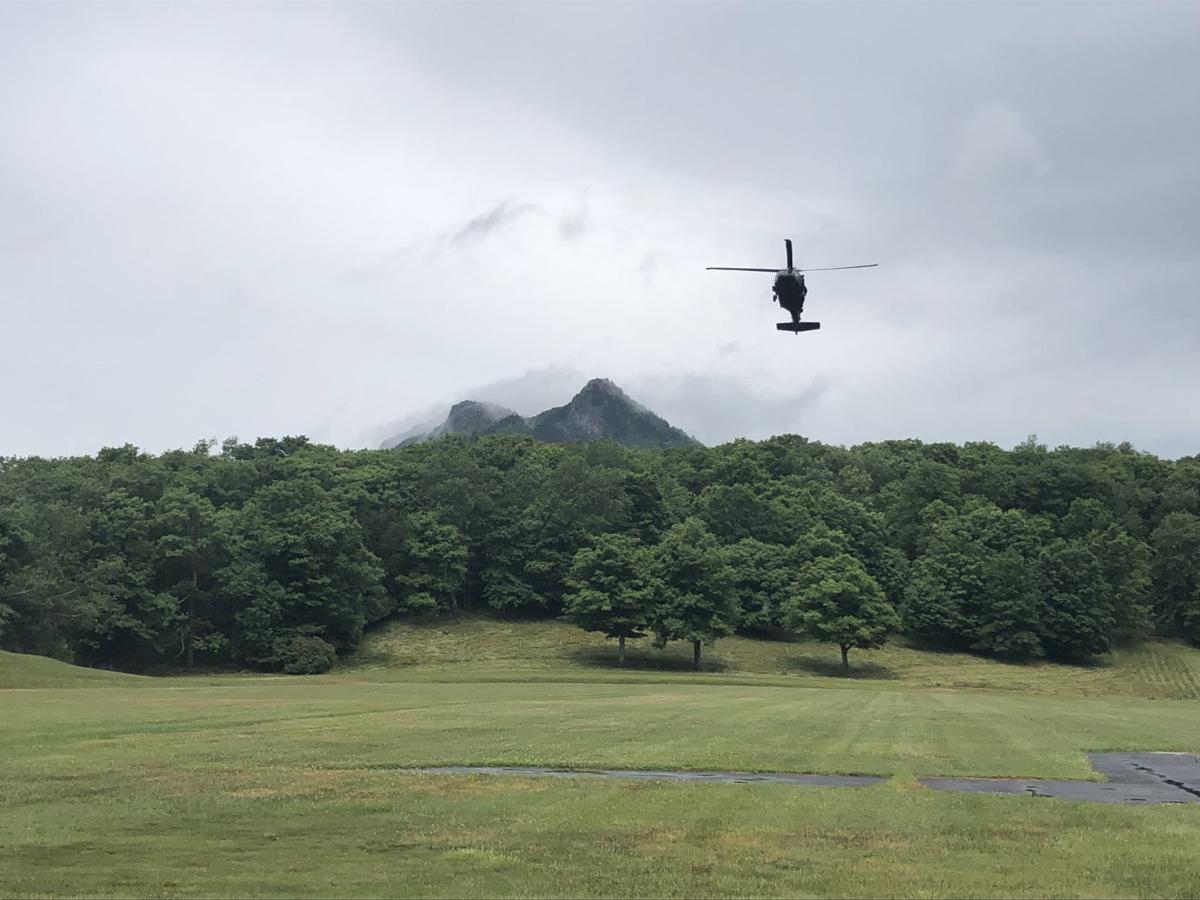 A Black Hawk helicopter approaches MacRae Meadows during a rescue operation from Grandfather Mountain, pictured in the background, on Wednesday, June 5. 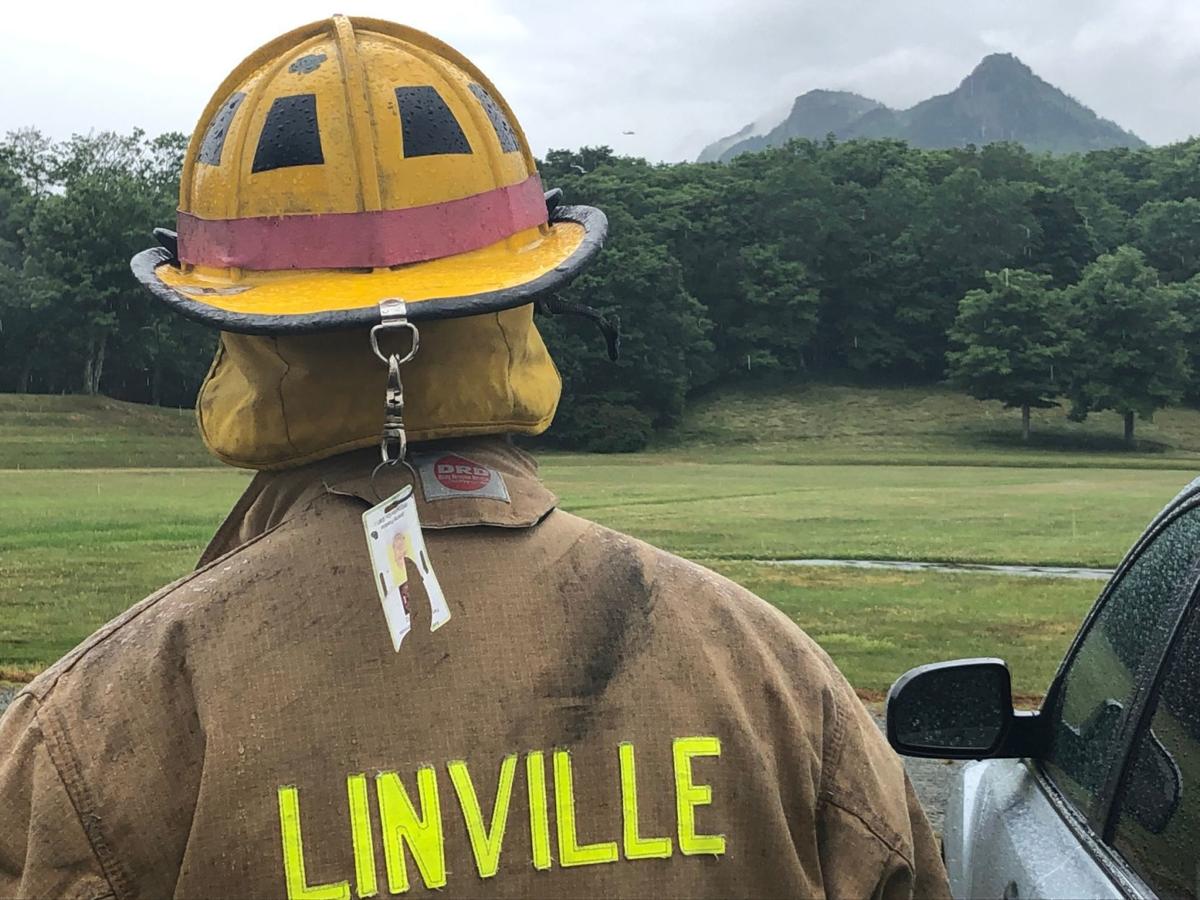 A Linville firefighter waits for a Black Hawk helicopter at MacRae Meadows during a rescue operation from Grandfather Mountain, pictured in the background, on Wednesday, June 5. 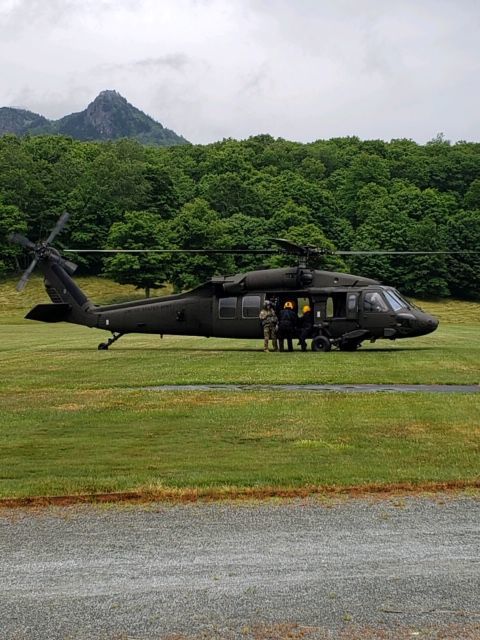 A patient is unloaded from a Black Hawk helicopter at MacRae Meadows on June 5, following a mountaintop airlift.

A Black Hawk helicopter approaches MacRae Meadows during a rescue operation from Grandfather Mountain, pictured in the background, on Wednesday, June 5.

A Linville firefighter waits for a Black Hawk helicopter at MacRae Meadows during a rescue operation from Grandfather Mountain, pictured in the background, on Wednesday, June 5.

A patient is unloaded from a Black Hawk helicopter at MacRae Meadows on June 5, following a mountaintop airlift.

LINVILLE — A second Black Hawk helicopter rescue in 11 days took place near one of the peaks in the Grandfather Mountain State Park after a hiker suffered a broken ankle on June 5.

Watauga County Emergency Management’s Taylor Marsh, who assisted in the rescue, said the call came at 11:30 a.m. for an injured 24-year-old male. According to Frank Ruggiero of the Grandfather Mountain Stewardship Foundation, the hiker suffered the injury in the Attic Window area.

Brandon Townsend, a full-time firefighter at Linville Volunteer Fire Department, said the patient was stable but was unable to walk or apply any weight to his ankle. With potential severe weather nearby, Townsend said the patient had found some shelter underneath some rocks.

“Local rescuers from Watauga and Avery counties hiked in and treated the patient on site,” a June 5 statement from the N.C. Department of Public Safety said.

Marsh said the patient was located 1.5 miles away from the nearest parking lot. Due to the rugged mountain terrain, a carryout would have taken six-plus hours, Marsh said.

Additionally, Townsend said the responders were receiving reports from the National Weather Service of storms producing heavy rain and lightning moving through the area, which posed an increased risk for rescue workers who would have had to perform a high-angle rescue without the airlift rescue.

“He wasn’t exactly where we thought he was going to be but he was close, so we’re looking at the map and we know that we’ve got so many sets of ladders that we’re going to have to negotiate, so we know off the top that’s going to be a high angle,” Townsend said.

Marsh said his department contacted N.C. Emergency Management and requested the assistance of the North Carolina Helo-Aquatic Rescue Team for an airlift rescue.

“While avoiding fog rolling over the mountain, the N.C. HART crew hoisted the injured hiker into the aircraft, flew to a nearby landing area and transferred him to a waiting ambulance for transport to a local hospital,” the N.C. DPS June 5 statement said.

The Black Hawk landed at MacRae Meadows and the man was transported by Avery EMS, Ruggiero said.

N.C. DPS said that since N.C. HART was established in 2004, the first of its kind in the nation, the team has saved hundreds of lives.

A similar incident occurred on May 26 when a hiker suffered an ankle injury in the MacRae Peak area, which neighbors Attic Window. The hiker was airlifted by N.C. HART to MacRae Meadows, where he was transported to Cannon Memorial Hospital in Linville, where he was released later in the day.

Carl Blankenship contributed to reporting for this story.