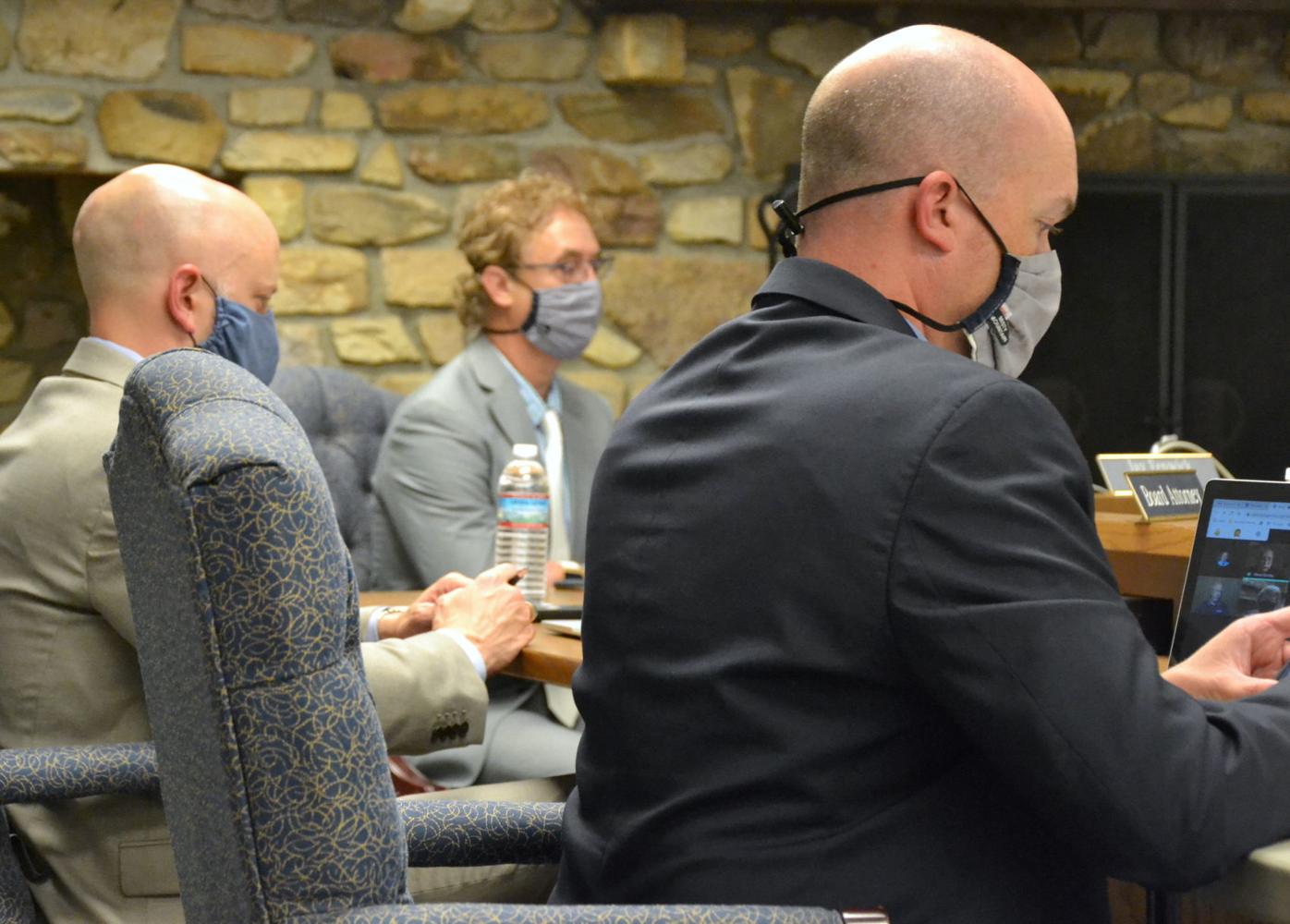 Watauga Board of Education attorney John Henning of Campbell Shatley PLLC, board member Jay Fenwick and Superintendent Scott Elliott meet with other board of education members and Watauga County Schools staff for a July 13 meeting. 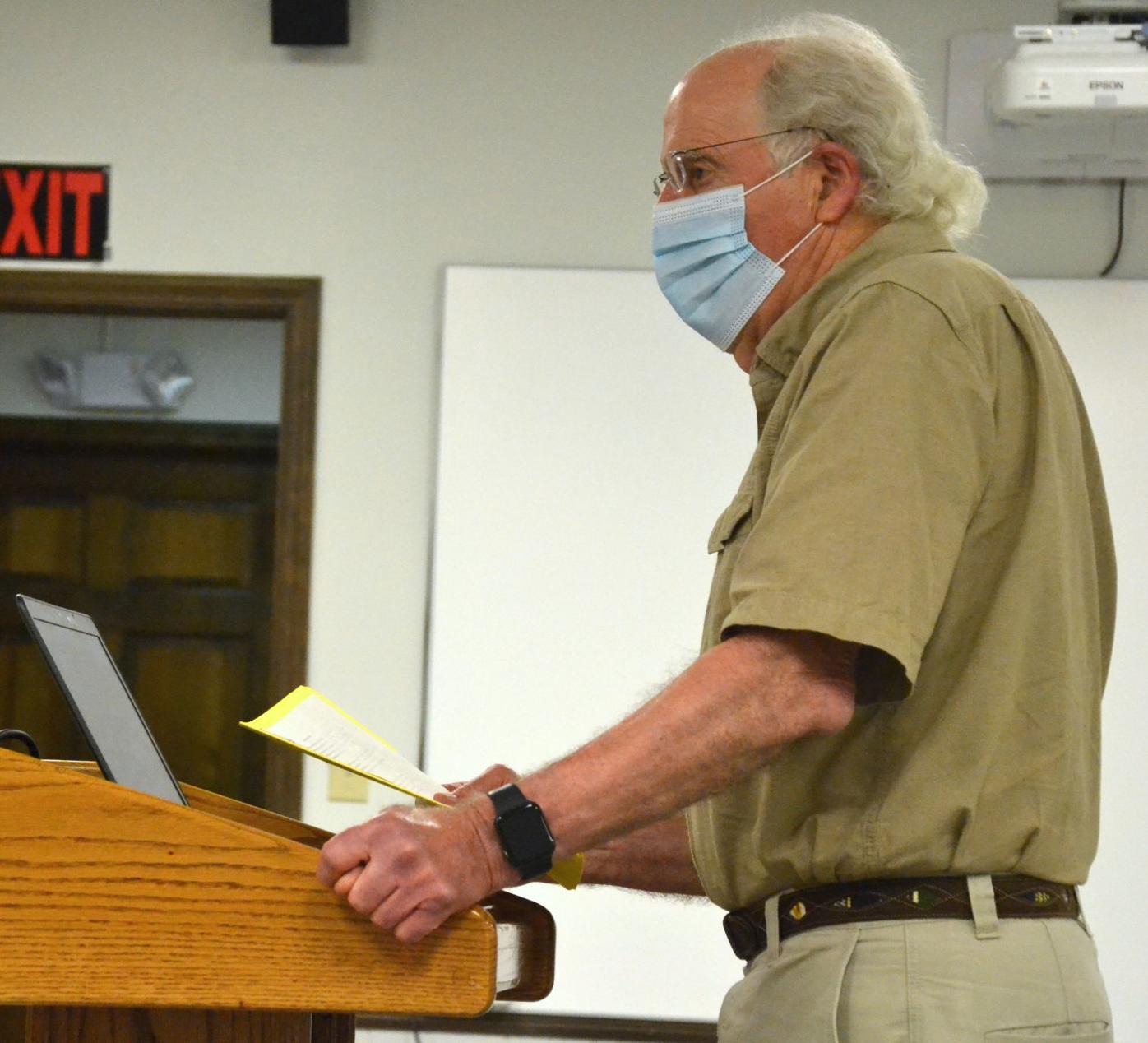 Lyle Schoenfeldt speaks to Watauga Board of Education members on July 13. 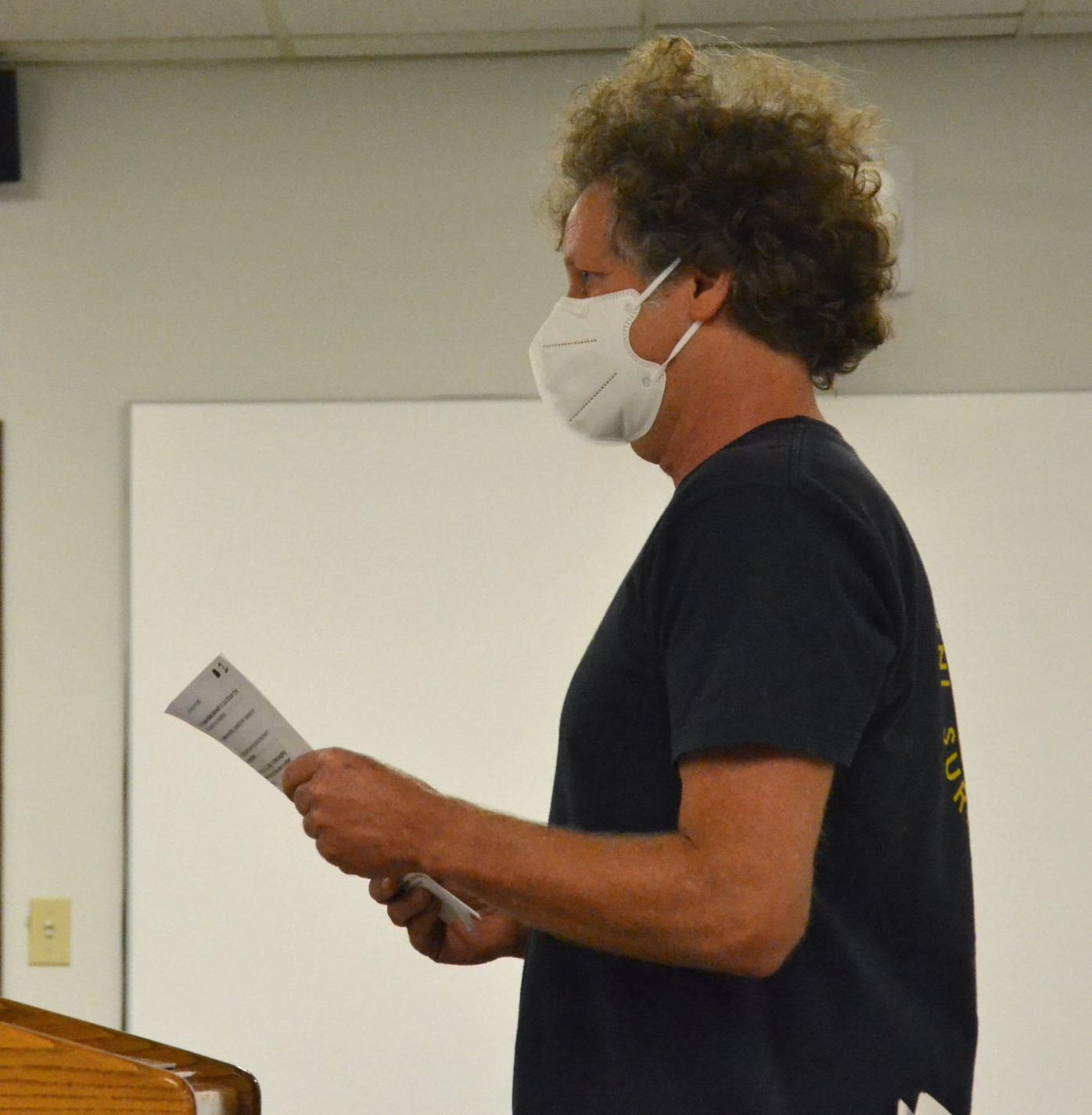 Bill Pressly speaks during a public comment period of the July 13 Board of Education meeting. 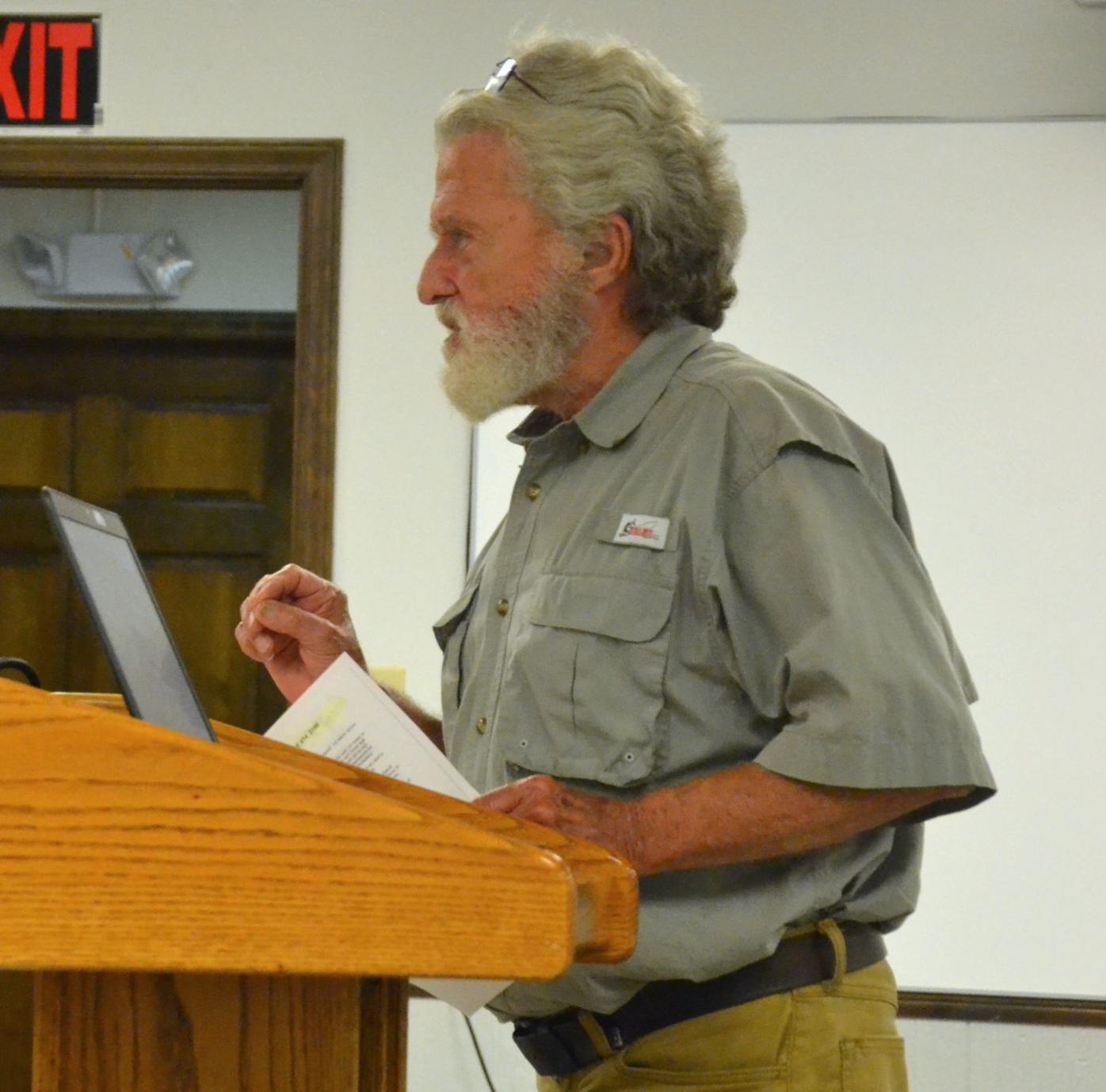 Larry Ingle discusses a property in Valle Crucis during the July 13 meeting of the Watauga Board of Education.

Watauga Board of Education attorney John Henning of Campbell Shatley PLLC, board member Jay Fenwick and Superintendent Scott Elliott meet with other board of education members and Watauga County Schools staff for a July 13 meeting.

Lyle Schoenfeldt speaks to Watauga Board of Education members on July 13.

Bill Pressly speaks during a public comment period of the July 13 Board of Education meeting.

Larry Ingle discusses a property in Valle Crucis during the July 13 meeting of the Watauga Board of Education.

BOONE — The Watauga County Board of Education unanimously approved a resolution on July 13 supporting the purchase of property in Valle Crucis to build a new school.

The property is a 14.4-acre tract of land that has been referred to as the Hodges property, situated along Broadstone Road approximately one-quarter mile from the existing school. The board approved a contract for purchase of the property in March 2019 and has been in a due diligence period to conduct testing ever since.

The work put into the due diligence process “went above and beyond” and was the “most extensive process we’ve ever gone through,” said project architect Chad Roberson with Clark Nexsen. These sentiments were echoed by board attorney John Henning, who said he has been involved with 25 to 30 investigations for school sites during his time as a school attorney.

“I know of nothing anywhere remotely like the level of thorough investigation, questioning and study that you all have done,” Henning said.

Roberson explained that more than 15 different investigative reports were conducted on the site, including preliminary program analysis based on Department of Public Instruction standards, soil investigations, environmental assessments, conversations with the Department of Transportation, wetland delineations, a preliminary zoning analysis and the drilling of a well for a domestic water system.

Additionally, Roberson said a review of other properties throughout Valle Crucis was conducted to determine if the Hodges property was the most viable site for a school. At the end of all of the research, Roberson said the Hodges property was determined to have the ability to support a school of somewhere between 70,000 to 75,000 square feet, which would include parking. The due diligence process concluded with the issuance of an improvement permit and site plan approval from AppHealthCare on June 9.

The board’s resolution requests that the Watauga County Board of Commissioners enables the use of the property as a school site in as “expeditious (of) a manner as possible.” Once the zoning matter is handled, the board will approve the final purchase of the property, according to the resolution. The county has agreed to the $1,105,000 purchase price for the property, of which the county already has $25,000 put toward the purchase.

Three individuals spoke to the board in opposition of the purchase of the property — all three who had spoken at previous meetings with the board or at past commission meetings. Lyle Schoenfeldt, the chair of The Steering Committee of Residents and Friends of Historic Valle Crucis, expressed eight concerns from community members who had signed a petition created almost a year ago by www.vallecrucis.net. The site is maintained by those who oppose the placement of the school on the Hodges property.

Concerns read by Schoenfeldt ranged from the status of the National Rural Historic District designation, the cost of the property being “overpriced,” the flow of vehicles on Broadstone Road, the school structure being a “detriment” to the community’s historic character and water runoff.

Before the vote was taken to approve the resolution, board member Jay Fenwick explained why he was voting in support of the property purchase and addressed concerns stated by the speakers. He said his decision process over the last year has been influenced by four factors: a desire to keep the school in the Valle if possible, finding a suitable site to meet current and future needs, ensuring the decision is financially responsible and the want to listen to community members.

Fenwick explained that the current Valle Crucis School was a cornerstone of the original National Historic District Registry application due to its about 200-year history in the area.

“Taking the school out of the Valle seems a greater threat to the Valle’s historic character than moving it a quarter mile up Broadstone Road,” Fenwick said.

Fenwick said the Historic District commission will be involved in the school’s design aesthetics to ensure the character of the area remains. He also stated that he understands that some people seem to think that the purchase price for the property is too high, but said that other properties are selling and listing in the area for higher per-acre amounts.

Fenwick added that some community members have suggested waiting to purchase property due to the current economic climate. He said that the need for a new Valle Crucis school is immediate, and to delay the project any further “borders on irresponsibility.”

Bill Pressly addressed the board and said that the “single-minded pursuit” for the purchase of the Hodges property has been flawed since its inception. Pressly also stated that traffic in the area will be a problem, and that the placement of the school on the property will increase flood risk, water displacement and runoff.

“Sadly, the students, the community and the environment will suffer the consequence of your action today (and) for generations to come,” Pressly said.

Fenwick said he, along with others on the board, are concerned about flooding. For this reason, he said the board sought out experts to ensure the area would be suitable for a school.

“These experts ... building to safe and smart regulations, in my mind, should be trusted,” Fenwick said.

The board also heard from Larry Ingle, who opposed the purchase of the property; Mitch Mayhew spoke in support of the property purchase. Additionally, the board received a letter of support from the Valle Crucis School PTA.