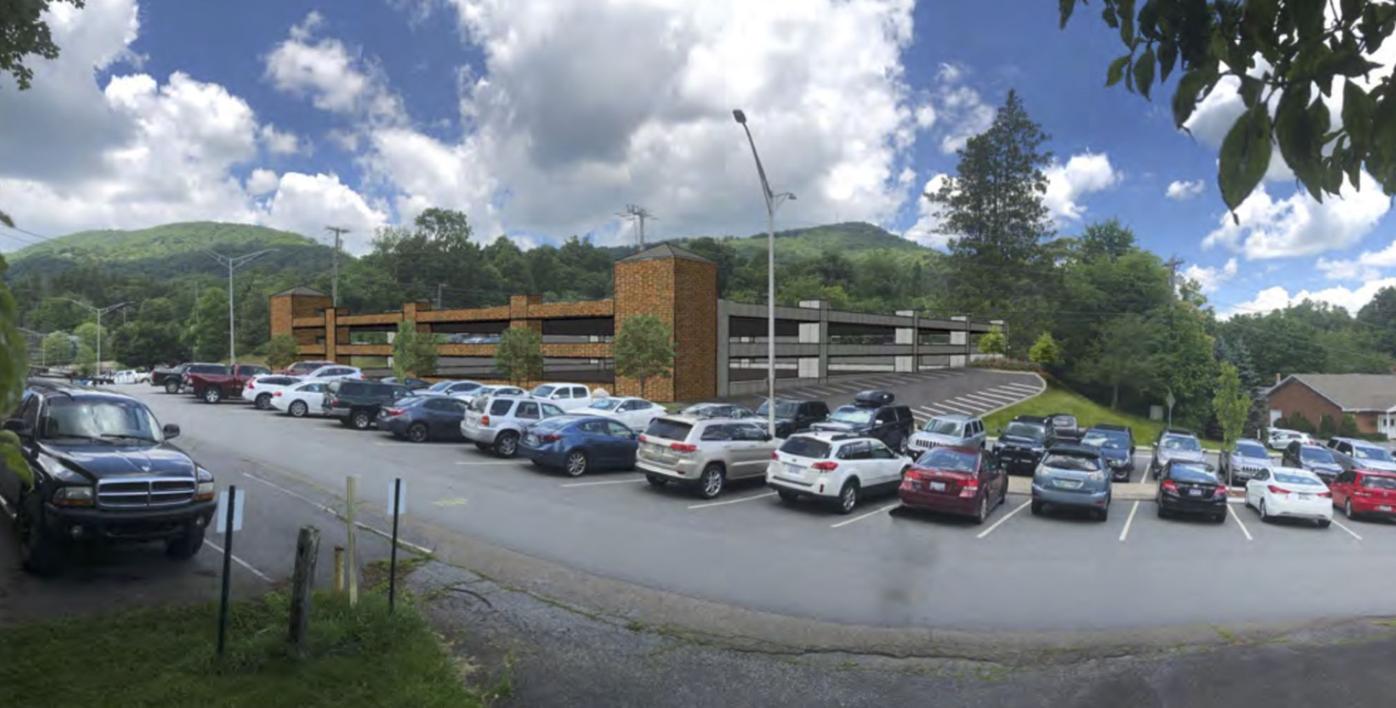 A conceptual rendering by McGill Associates imagines a 450-space, three-level parking deck at the site of an existing Queen Street surface parking lot. 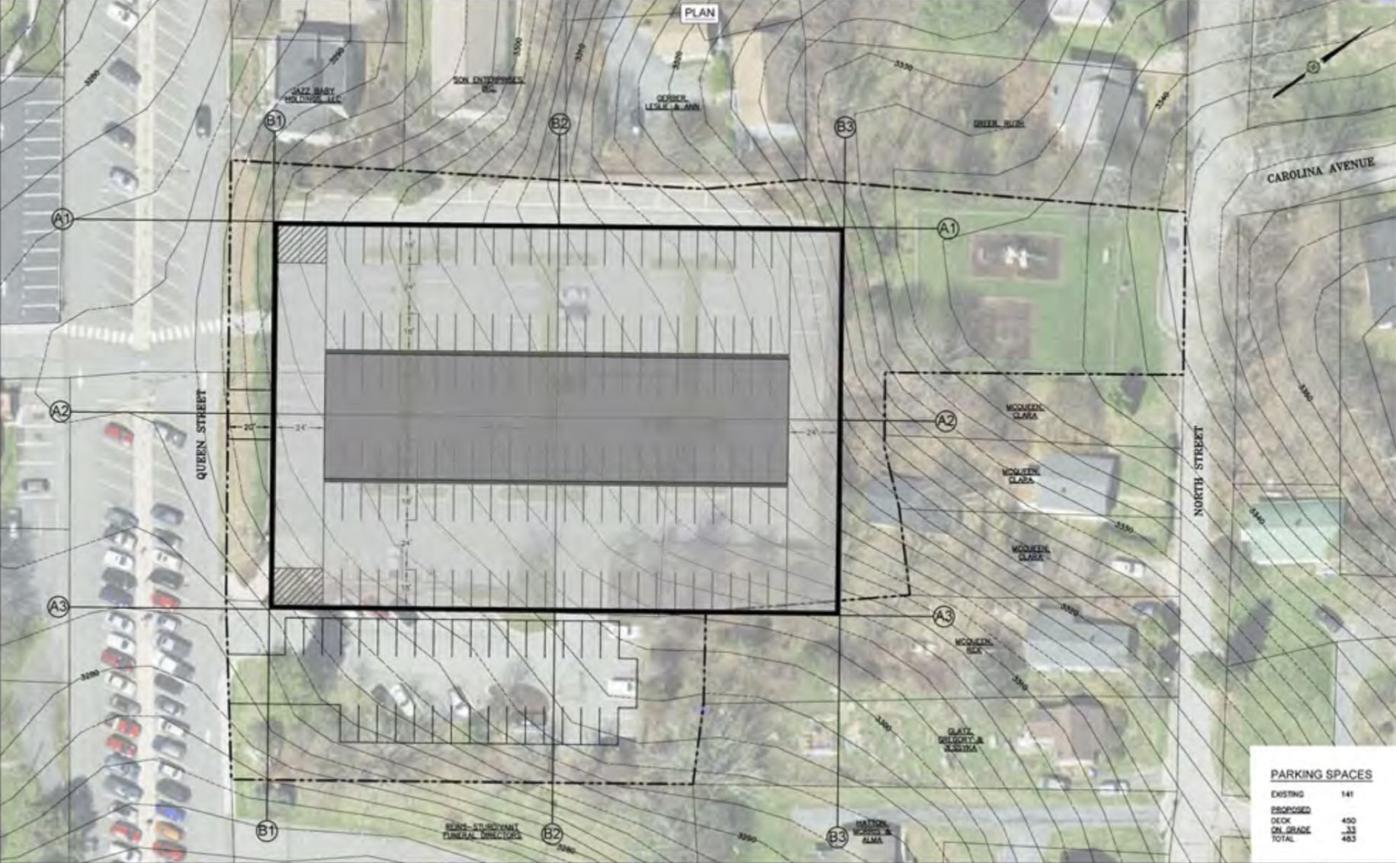 The footprint of a proposed Option 1 for a parking deck on Queen Street is superimposed over the existing surface parking lot. 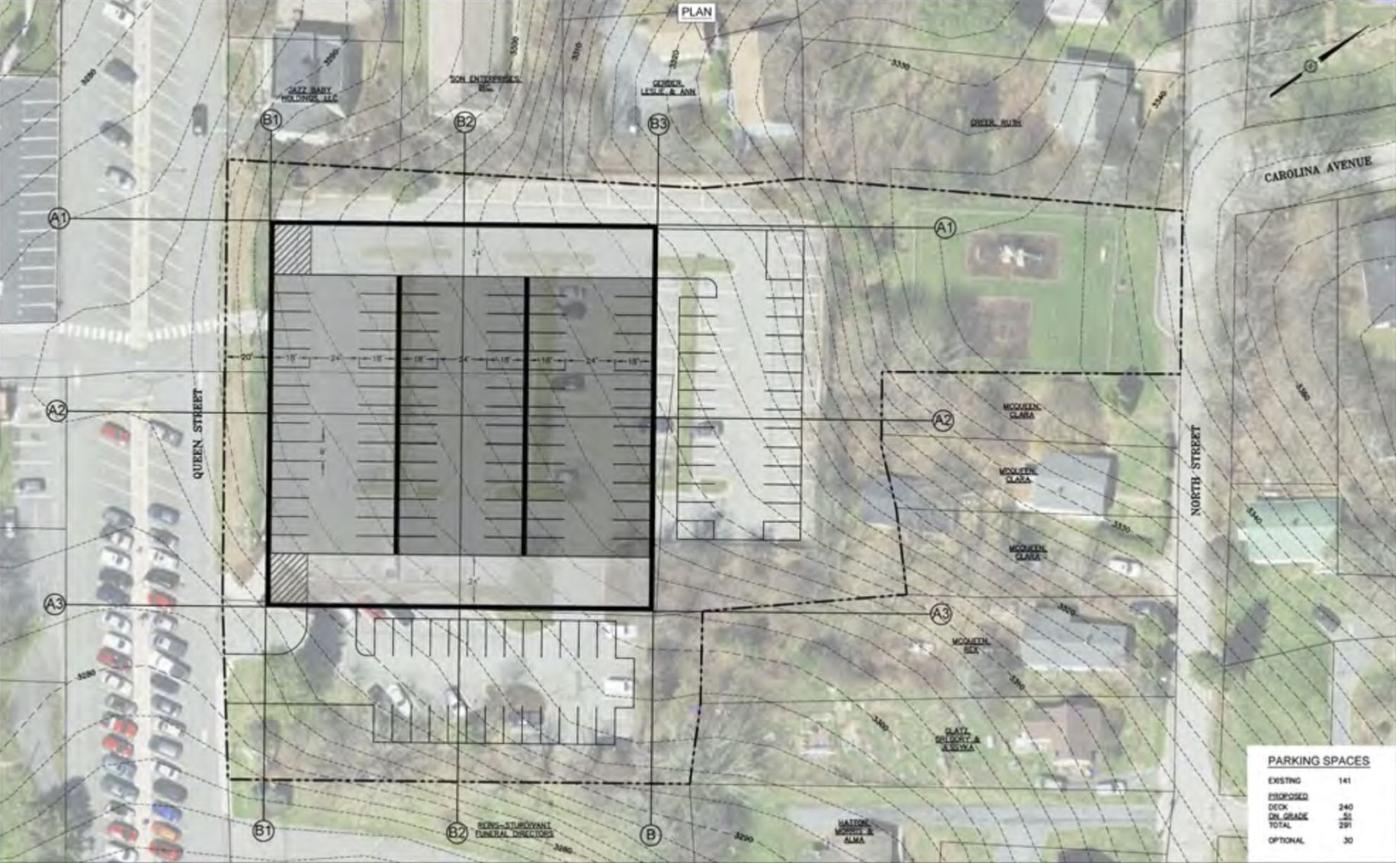 The footprint of a proposed Option 2 for a parking deck on Queen Street is superimposed over the existing surface parking lot.

A conceptual rendering by McGill Associates imagines a 450-space, three-level parking deck at the site of an existing Queen Street surface parking lot.

The footprint of a proposed Option 1 for a parking deck on Queen Street is superimposed over the existing surface parking lot.

The footprint of a proposed Option 2 for a parking deck on Queen Street is superimposed over the existing surface parking lot.

The exploration of the joint parking deck project came out of discussions between the town and county about the fate of the Hardin/Turner House at 136 N. Water Street.

The county owns the house and had planned to demolish it to make room for additional parking in the area of the Watauga County Courthouse. After learning of the county’s plans, several Boone Town Council members and local historic preservation advocates expressed concerns about the loss of one of the downtown area’s oldest residential structures.

Watauga County Manager Deron Geouque said in February that the county could potentially donate the house to the town, with the cost that the county paid for the home to be credited toward the county’s investment in the potential parking deck.

Boone Town Manager John Ward, speaking July 16, said that the next step in evaluating the project’s potential will be exploring potential business models for the parking deck.

Ward noted that the town’s existing Queen Street parking lot provides permit parking for employees of downtown businesses, and that the town would have to be creative in providing parking to permit holders during the construction of a parking deck.

Councilperson Sam Furgiuele said he believed that the project partners should be aiming for Option 1, as future parking needs will only increase. He also said he wanted to bring adjacent neighborhoods into the discussion.

At its meeting on June 18, the council unanimously approved Furgiuele’s proposal to create a Police Committee consisting of the mayor, the five council members and six other members recruited by the council to discuss police issues and make recommendations if warranted, starting with consideration of the “8 Can’t Wait” proposals.

Boone Police stated last month that a “vast majority” of the 8 Can’t Wait measures were already included within its use of force policy.

“I have great confidence in the Boone Police and the department’s leadership,” Furgiuele said in June. “They have diversified their workforce and have focused training on de-escalation and the avoidance of deadly force. They have been active in community outreach. I nevertheless believe it is important that we continue our conversation and the increased transparency which discussion facilitates. Such a conversation is the starting point for any change which might be needed and beneficial.”

Appointments to the committee were on the agenda for the July 16 meeting, with descriptions of Furgiuele’s and Councilperson Loretta Clawson’s nominees, Dana Folk and Tonia Coles, included in meeting materials.

During the meeting’s public comment period, Reggie Hunt, pastor of Cornerstone Summit Church in Boone and student-athlete leadership coordinator for App State Athletics, voiced concerns about the process established for forming the committee, stating that committee selections by council members might not be the best way, and urging the council to engage in a more in-depth process of listening to Black and brown students, community leaders and residents about what the criteria for a Police Committee should be.

“I was pretty disturbed by the approach for this,” Hunt said. “It was insulting for you to consider this review board without talking to people of color. I have never heard from many of you on this call.”

The council later agreed to postpone deliberation on the Police Committee until the August meeting.

The council on July 16 agreed to direct staff to develop language for a new E4 zoning district, which would allow for university uses such as a child care center.

The direction came after the town’s Planning Commission voted to recommend denial of Appalachian State University’s request to rezone property at 538 Poplar Grove Road from R1 Single-Family Residential to E1 Educational District. The university also sought annexation of an adjacent 2.27 acres and requested E1 zoning for that parcel as well.

Appalachian State seeks the annexation and zoning amendments to allow for the expansion of the Lucy Brock Child Development Center. The center currently serves 68 children, and the expansion would allow for 54 additional children to be served.

The Planning Commission expressed concerns about the E1’s broad allowable uses and incompatibility with the adjacent residential neighborhoods. Furgiuele said he would be more comfortable if the university instead requested a conditional district rezoning, which ties the zoning amendment to a site-specific development plan.

“If we could hold the university to the plan that it has specified, I would have no hesitation at all about accepting this,” Furgiuele said at the council’s July 14 meeting.

The council did not vote on the rezoning, however, because the first of two required motions on July 14 failed to garner a second.

Matt Dull, associate vice chancellor for student affairs at Appalachian, said on July 16 that conditional district rezoning would require approval from the State Property Office and Council of State, which could delay the project for up to a year. He proposed the E4 district as a solution to create a zoning district with limited uses allowable by right, such as child care centers.