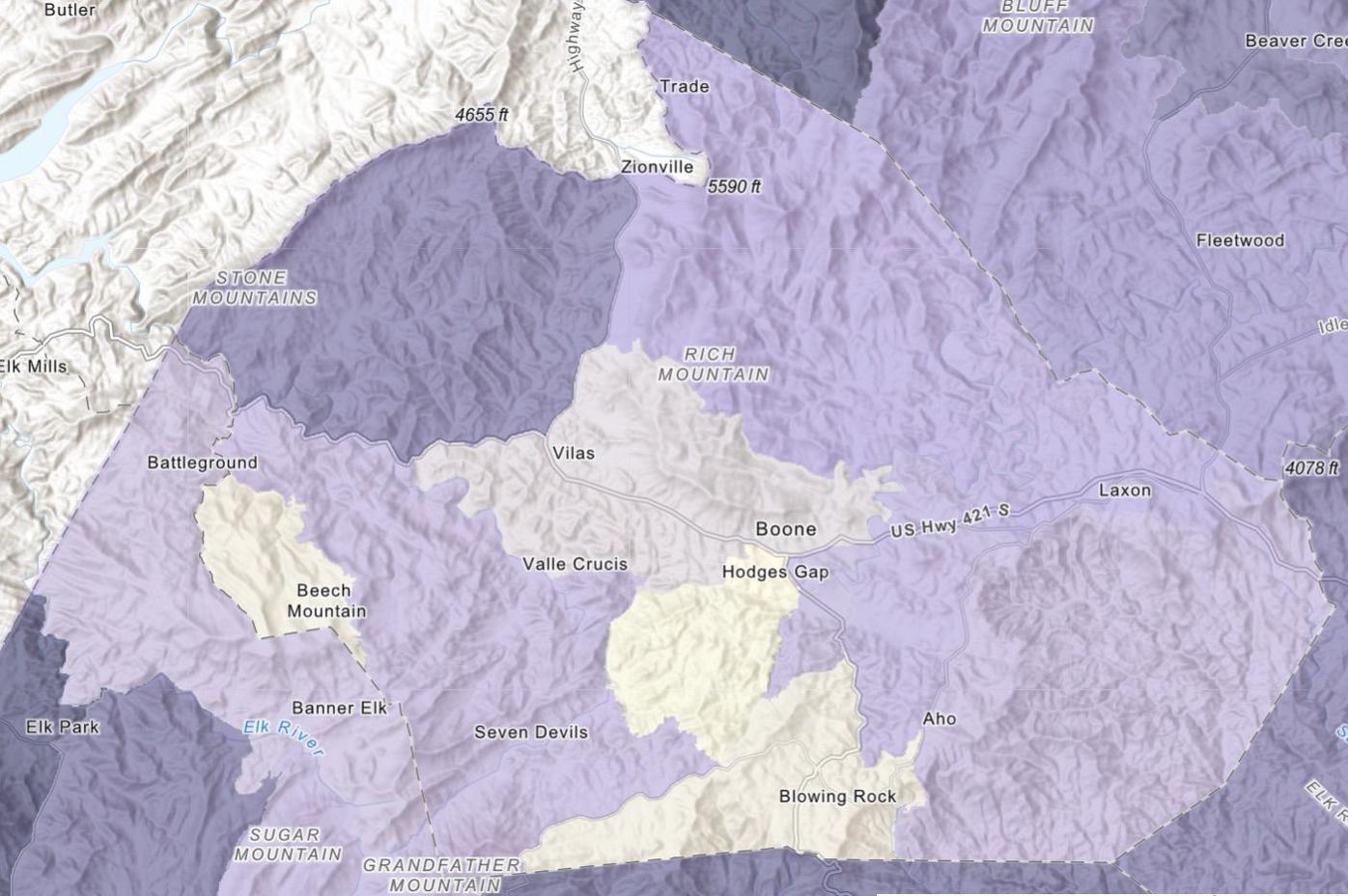 A map of Watauga can be seen from the North Carolina Department of Information Technology depicting the percentage of households without internet — white being less than 7 percent and the darker purple representing more than 31 percent. 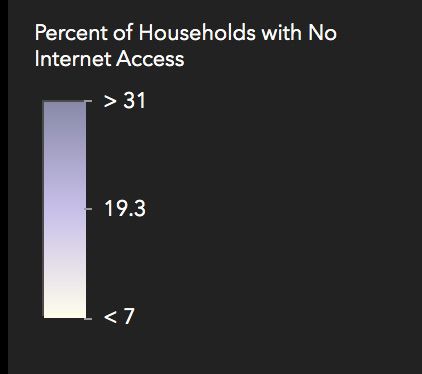 Information from the North Carolina Department of Information Technology depicts the percent of households without internet access in an area.

The NC North Carolina Department of Information Technology’s Broadband and Infrastructure Office creates a map showing the estimated homework gap in the state.

A map of Watauga can be seen from the North Carolina Department of Information Technology depicting the percentage of households without internet — white being less than 7 percent and the darker purple representing more than 31 percent.

Information from the North Carolina Department of Information Technology depicts the percent of households without internet access in an area.

The NC North Carolina Department of Information Technology’s Broadband and Infrastructure Office creates a map showing the estimated homework gap in the state.

In a time of “digital divide” when rural areas were already struggling to expand broadband access based on income and geography, Watauga Planning and Inspections Director Joe Furman said the COVID-19 pandemic has underscored the need for high-speed internet.

While progress has been made in Watauga in the last 10 years towards internet connectivity, Furman said more broadband is badly needed. The eastern side of the county is still significantly lacking, as Furman said digital subscriber lines (DSL) — using copper wire — are the primary broadband medium there. This was an issue when a lot of the North Carolina workforce was asked to work from home during the pandemic.

“People working from home need (broadband) in order to work, and if it is lacking or inadequate, they can’t work,” Furman said.

North Carolina students switching to remote learning from home also demonstrated the holes in North Carolina’s internet access, as students were asked to connect to the web for many assignments.

“That has a profound effect on rural public school students who are expected to do their homework and other things online, or with the aid of online resources, and don’t have broadband because of affordability or availability,” Furman said. “That puts them at a disadvantage.”

The North Carolina Department of Information Technology’s Broadband and Infrastructure Office published a report called “The Homework Gap in North Carolina” in March. According to the report, a gap occurs when students are assigned homework requiring internet access, but they don’t have access at home.

The report included 8,485 surveys from North Carolinians, and 10 percent stated they didn’t have internet at home. The survey asked parents where their children visited to complete homework that required the internet a least once a week or more — 20 percent answered with someone else’s home, 12 percent said restaurants and 9 percent answered with the library. This could pose a problem for some during a pandemic when restaurants and libraries are closed, and citizens are urged to be socially distant.

Watauga officials aided students during the last portion of the school year by allowing them to pick up and drop off materials that didn’t require internet, and wifi hotspots were placed in school windows so students could work from their vehicles in school parking lots.

Nancy Zeiss, the current Watauga County Schools director of technology, said the school system purchased three wifi hotspots to use on buses — a common practice across the state — but the school system chose not to use them. The hotspots were deemed not as helpful, as the buses needed to be running in order to power them, but WCS have since received hard-wire kits that have the potential to work for a while after the bus is turned off.

Even with the innovative ways educators were trying to reach students, many agreed that the end to the school year was just not the same.

“Should the Homework Gap not be addressed in a systematic, comprehensive way, it will continue to grow,” stated the BIO report. “If its growth continues unhampered, an increasing number of students impacted by it will not be prepared for the work of the 21st century.”

To view the full homework gap report and recommendations the group made to address the gap, visit tinyurl.com/ybh5bavb.

The Watauga County Board of Education passed a resolution at its June 8 meeting that stated that the lack of broadband in Watauga creates “significant educational inequalities for students and teachers.” The resolution called for national, state and local authorities to publicly find or incentivize private funding for the “rapid deployment of these needed broadband services.”

Cooper signed Executive Order 90 on March 14 that established a task force with duties such as identifying ways the state can promote broadband connectivity and coordinating efforts to seek federal funding. Executive Order 90 also promoted the expansion of access to high-speed internet, and removing barriers to broadband infrastructure. The Watauga school board’s resolution endorsed support of the executive order.

Broadband expansion has been a hope for many in Watauga County over the years, but lack of funding or companies willing to do so in the area have stalled any progress.

North Carolina law currently prohibits counties to own or operate broadband facilities, Furman said. House Bill 431, known as the FIBER NC Act, was filed in March 2019 with the hopes of eliminating the state’s restrictions. It would have allowed local governments to invest in broadband infrastructure and become more involved in the process. The bill was referred to the committee on finance in August 2019 and has not had any action since.

“If the N.C. statutes are amended to permit local governments to be more involved in broadband provision, I think Watauga County would have a chance at those funds, especially if the tier system is not used as a factor in making awards,” Furman said.

The economic tier rankings — created by the N.C. Department of Commerce — were previously an issue in Watauga receiving broadband funding. As a Tier 3 county, it is considered one of the state’s “least-distressed counties.”

According to Carolina Public Press, some pushback on HB 431 came from large cable and telecommunications companies who didn’t want to compete with the public sector. This was a topic of discussion brought up during the Watauga County Board of Commissioners budget workshop on May 14. County Manager Deron Geouque expressed frustration with the law, as he said larger companies seek out urban areas and don’t make investments in rural areas.

“The General Assembly said they were going to limit municipalities and counties in their ability to get into the internet business. That’s fine if they want to do that, but then they need to step up to the plate and start providing internet service up here so that our people can utilize it for telemedicine and tele-education,” Geouque said.

N.C. Rep. Ray Russell (D-Boone) joined Rep. Scott Brewer (D-Rockingham), Rep. Rachel Hunt (D-Charlotte) and Rep. Joe Sam Queen (D-Waynesville) as primary sponsors of HB 1122 to Provide Affordable Broadband Access to NC, filed on May 14. The bill has 46 sponsors and co-sponsors, according to Russell. HB 1122 was referred to the committee on rules on May 18.

The group hosted a press conference on May 21 to promote the bill, which is proposed to establish a $5 million Homework Grant pilot project, invest $85 million in the Growing Rural Economies with Access to Technology (GREAT) program, expand health benefit coverage of telehealth services and allow local governments more authority to expand broadband to citizens.

Sen. Deanna Ballard (R-Blowing Rock) said she is certainly supportive of broadband expansion efforts, and looks forward to hearing if HB 1122 comes out of the House for Senate consideration. In recent years, Ballard said she had voted in support of increased funding for the GREAT program on several occasions.

“Not having discussed this bill with Rep. Russell, I anticipate there will be sections of the bill I would be supportive of, such as closing the homework gap and expanding the GREAT program,” Ballard said. “I know there is more work to do and I continue to explore options to help our citizens in hard-to-reach areas.”

Not only are conversations about broadband taking place at the local and state levels, the federal government is also making plans. A June 3 statement from the U.S. Senate Committee on Commerce, Science and Transportation discussed the Federal Communications Commission’s plans for the Rural Digital Opportunity Fund Phase I.

According to the statement, the FCC created the RDOF to support broadband deployment in unserved areas by distributing $20.4 billion over 10 years. The FCC plans to begin RDOF Phase I this October, which will make $16 billion available for broadband services.