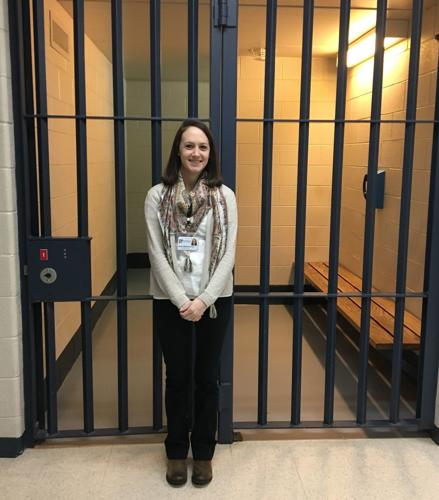 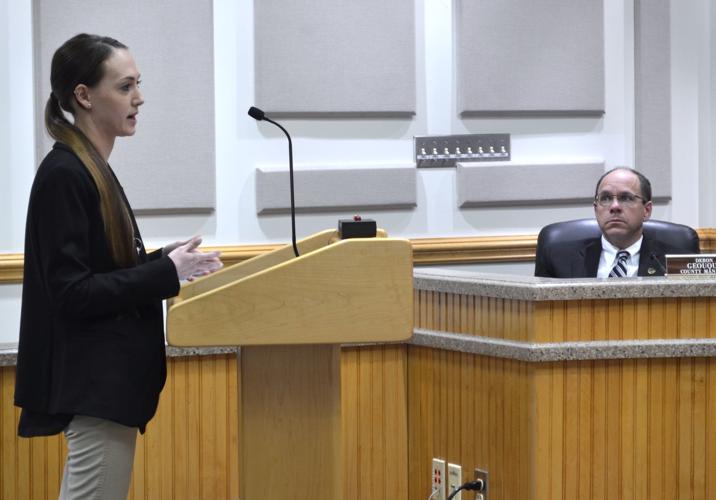 Mollie Mellishrencken, during her time as a Watauga County Sheriff’s Office intern, talks to the commissioners in March 2018 about data she collected during her research. Also photographed: County Manager Deron Geouque.

Mollie Mellishrencken, during her time as a Watauga County Sheriff’s Office intern, talks to the commissioners in March 2018 about data she collected during her research. Also photographed: County Manager Deron Geouque.

BOONE — A new initiative to reduce recidivism at the Watauga County jail is already receiving positive feedback, with one inmate calling it an “inspiration” and a “blessing” in a handwritten letter to Sheriff Len Hagaman.

The letter was written to Hagaman in spring 2018 after an intern studied inmate recidivism — the cycle of coming in and out of incarceration on multiple occasions. Mollie Mellishrencken started her internship with the sheriff’s office in January 2018 as a social work graduate student at Appalachian State University.

One inmate wrote the letter, with the signatures of 23 inmates on the back. The name of the writer was withheld by the sheriff’s office to protect the person’s privacy.

The writer said that during a previous incarceration at the jail, he didn’t have the opportunity for personal growth that Mellishrencken had offered through her work.

“I’m in the process of signing on with a one-year (residential substance abuse) program all because of the inspiration she had brought to this jail,” the letter states. “If it wasn’t for her taking the time to help me and the other good hearted men in this jail, we would be aiming to do more bad than good when we are released.”

The letter requested bringing on Mellishrencken to detention staff full time to continue the work she had started as an intern “so she could not only be a blessing to me, but to all the men in the future that is in jail here.” With the help of grant funding, this request became a reality.

Jennifer Greene, health director at AppHealthCare, said the health department partnered with the sheriff’s office to obtain a grant to fund Mellishrencken’s position as the corrections treatment specialist. The North Carolina Opiate Action Plan grant, for $15,000, was awarded in June for the detention center position as well as other programs such as post overdose response and a syringe exchange program.

Mellishrencken resumed her work at the jail in August. Through this position, Mellishrencken is hired through AppHealthCare to increase treatment and recovery support for those involved in the justice system.

“She serves as the missing link for the people who otherwise would fall through the cracks and return to the same environment, and ultimately come back to detention,” Hagaman said.

In this role, Mellishrencken helps inmates obtain resources, such as substance abuse treatment, while navigating through hurdles like pending court cases, probation or facilities who won’t accept inmates. She can also help inmates in obtaining food vouchers, employment applications and housing resources.

Mellishrencken started a life skills program in the jail during her internship to help give inmates skills to cope with transitioning back into the world. Mellishrencken said she hopes the program — given the name “recovery on the inside” — will grow to where inmates can complete the program and receive a certificate.

All of this work started after Hagaman and Capt. Kelly Redmon approached Mellishrencken at the beginning of her internship with the concern of recurring inmates, who were “often with no direction and little or no hope,” Hagaman said.

Mellishrencken spent the semester interviewing 50 chronic or habitual offenders who were arrested in Watauga County on three or more occasions. She would interview each individual for roughly an hour to “understand their biggest barriers and challenges” on what was keeping them from being successful, she said.

Through her research, Mellishrencken found the largest commonalities among the inmates were substance use, poor mental health, unstable housing and traumatic events from childhood.

“As law enforcement, we now find ourselves as societal problem solvers as well as (in) our law enforcement missions,” Hagaman said. “With that understanding, we’ve seen the same people cycle in and out of incarceration, struggling with the same issues. Law enforcement has a particular advantage because we’re able to reach the people who normally wouldn’t come into contact with treatment and health professionals in the community (and) who are in the most need of this focus.”

As part of the research process, the inmates were asked to take a standard Adverse Childhood Experiences assessment to address trauma.

This research found that 96 percent of those interviewed grew up in some sort of household dysfunction (a parent was mentally ill, parents abused drugs or alcohol, parents had been incarcerated, domestic violence was present in the home or parents were divorced); 65 percent grew up in abusive homes; and 57 percent were in a home that was neglectful.

Those who experience childhood trauma are more likely to be incarcerated, have mental health issues, be involved in domestic violence or have general health concerns, Mellishrencken said. When talking with the inmates, Mellishrencken said she would explain how traumatic childhood experiences can carry over into adulthood. When some of the inmates would realize that their experiences may have altered the way they think and act, “you see a light come on in a lot of their eyes,” she said.

Mellishrencken said that 86 percent of the detention center population is housed at the Watauga County Detention Center less than 30 days, with 11 percent housed between one and six months and 3 percent housed more than six months. Mellishrencken said that during this time, people lose financial security, employment or housing and then are released back into the world.

“We’re not solving anything by just locking people up and throwing away the key,” Mellishrencken said. “Virtually all of our population will be released back into the community at some point; most of them will be released dealing with the same issues that got them arrested in the first place. If we truly value community safety and preventing future crime, detention is an excellent intervention point to start solving problems.”

After Mellishrencken had collected all of the data, she then piloted programs. One of the programs consisted of the life skills groups in three of the four pods in the detention center. Lessons in these groups would help inmates with topics such as anger management or how to maintain healthy relationships. She also would bring color pencils and other materials to allow time for art therapy for inmates to write or draw what was on their mind.

With the grant money AppHealthCare and the sheriff’s office was awarded, Mellishrencken said two substance abuse curricula were purchased to continue these programs — one for women and one for men.

Local agencies — such as OASIS or the Children’s Council — would visit the jail and talk with inmates about their services. Mellishrencken would also have “peers” talk with the inmates; these were people who had been arrested before and could talk about their experience and how they became successful outside of incarceration.

“It’s really exciting to be out in the community and see people that you’ve worked with that are doing really well and want to come up and tell you about the job that they have, how they’re taking care of their elderly mother now or how they’re spending more time with their kids,” Mellishrencken said.

Mellishrencken found her passion in helping those in incarceration with her social work skills as a person in recovery herself. She said she’s been seven years sober and decided to dedicate her life to helping others. Mellishrencken discovered that people were wasting their lives in jail “because of a system that either doesn’t acknowledge or doesn’t know how to address addiction and mental illness.”

“(Inmates are) the easiest to blame for their circumstances, they receive the fewest resources and they’re the quickest to be forgotten about,” Mellishrencken said. “Once you’ve gotten a couple of charges and have been labeled as a troublemaker, people give up on you.”

Mellishrencken said it is not currently part of detention procedure to follow up with inmates once they’ve been released. She does follow up with agencies to ensure an inmate has made it to treatment if the person wished to go, as well encourage people to call the jail and talk with her if they need a little direction, she said.

AppHealthCare has recently posted a peer support person position and is looking to fill it in the coming months. When the position is up and running, this person will be able to follow up and continue to work with people outside of confinement to ensure their plan is working smoothly, Mellishrencken said.

“I think Mollie has done an incredible job to give hope and link people to resources,” Greene said. “We’re very grateful to her and her passion for helping others.”

The grant funding Mellishrencken’s position will expire in June. Greene said the health department and the sheriff’s office will be looking at ways to make all of its initiatives sustainable while also hoping the position can be refunded through another grant or additional dollars.

BOONE — AppHealthCare and the Mediation and Restorative Justice Center received a three-year federal allocation in excess of $550,000 to re-es…

Thanks to modern technologies, you and more people are reading the Watauga Democrat than ever before. Freedom of the press is essential to preserving democracy: But a free press isn't free. It takes significant resources for Mountain Times Publications' 8 full-time journalists and editors to provide credible, fact-based and ethical journalism in the High Country. So, we are asking you to join our advertisers and print subscribers in supporting local journalism with your dollar. Your financial support will help sustain these services that you use to inform your decisions and engage with your community.

This offer is currently unavailable.