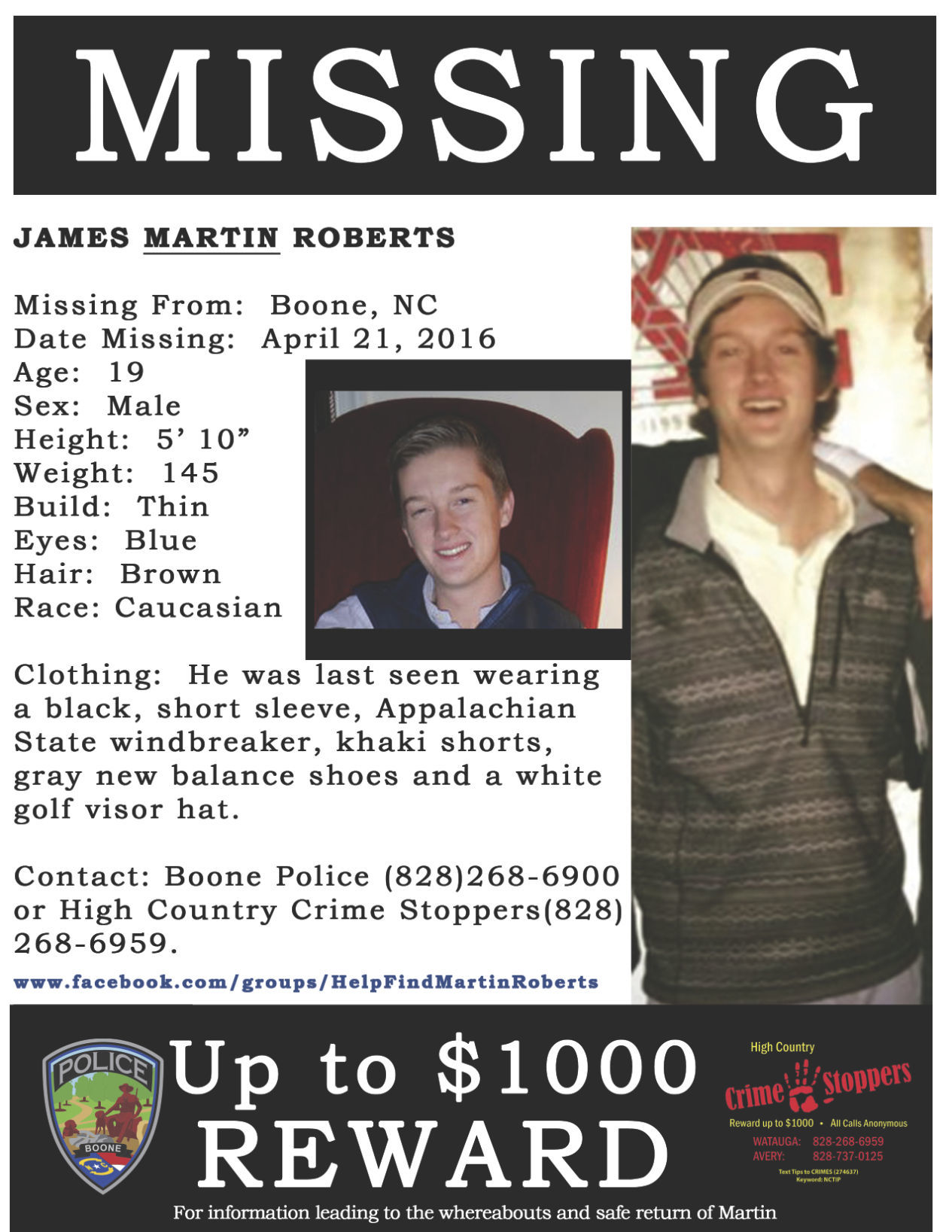 This flier was circulated last year in the search for James Martin Roberts.

This flier was circulated last year in the search for James Martin Roberts.

BOONE — According to his father, missing student James Martin Roberts left a note for friends and family before disappearing on April 21.

Roberts, a Caldwell Community College and Technical Institute student, was last seen around 12:30 p.m. near the Holmes Convocation Center that day, and police reported that he was missing on April 22.

Boone Police have led the investigation of his disappearance — searching area trails and wooded areas and sharing information across the state — but thus far have been unable to locate the missing 19-year-old.

Martin’s father, John Roberts, said the note his son left was vague and ambiguous, but led him to believe his son may have desired to “go off the grid” for a period of time.

“Since the note is pretty generic, it does give us hope that this is just a scenario of him not knowing what he wanted to do — just that where he was wasn’t it, and he didn’t know how to get out if it,” Roberts said. “That happens to people in all walks of life and at all ages. They get into situations they don’t know how to get out of and sometimes they don’t handle it the best way. Like this — they just disappear.”

Roberts said that it was extremely out of character for Martin to go without contacting his friends and family. He said his son is a “very social, friendly and tuned-in person.”

“He is very engaged as far as being in contact with family and friends,” Roberts said. “He didn’t necessarily post something on Facebook every time he did something, but he was engaged socially with the world. It is out of character for him to walk away from the grid — to not watch something on Netflix or play an online game with his friends. To just walk away from it all is just very unusual — very concerning.”

Roberts said his last conversation with his son was a hopeful, forward-looking talk about budgeting and saving money. He said Martin only possessed funds for day-to-day living expenses and there was no evidence to suggest he had a large amount of cash on hand when he went missing.

Roberts said his family has been hesitant to overplay the note in the past weeks so as not to sensationalize the story, or to complicate Boone PD’s search with false leads. The note, Roberts said, contained no real detail as to Martin’s intentions.

“We’ve tried to downplay the note a whole lot because it wasn’t like he said, ‘I’m going to do this, or I’m going to go there,’” Roberts said. “It is very vague and very general. The average person reading it wouldn’t say, ‘Well, you know this is the worst-case scenario, and it is only a matter of time before you find out what happened.’ It wasn’t that way at all. The note is pretty much ‘I’m starting some journey — I’m going somewhere.’”

Roberts said he is hopeful that as news of Martin’s disappearance continues to spread, there will be a sighting of his son. He said Martin is familiar with the coast, especially with Ocean Isle Beach.

According to Roberts, police have provided information on Martin to Wilmington and Myrtle Beach law enforcement.

Capt. Andy Le Beau of the Boone Police Department said that his investigation has distributed information on Martin to several homeless shelters around the state during the past days. Places, Le Beau said, where someone might be able to live off the grid or lay low.