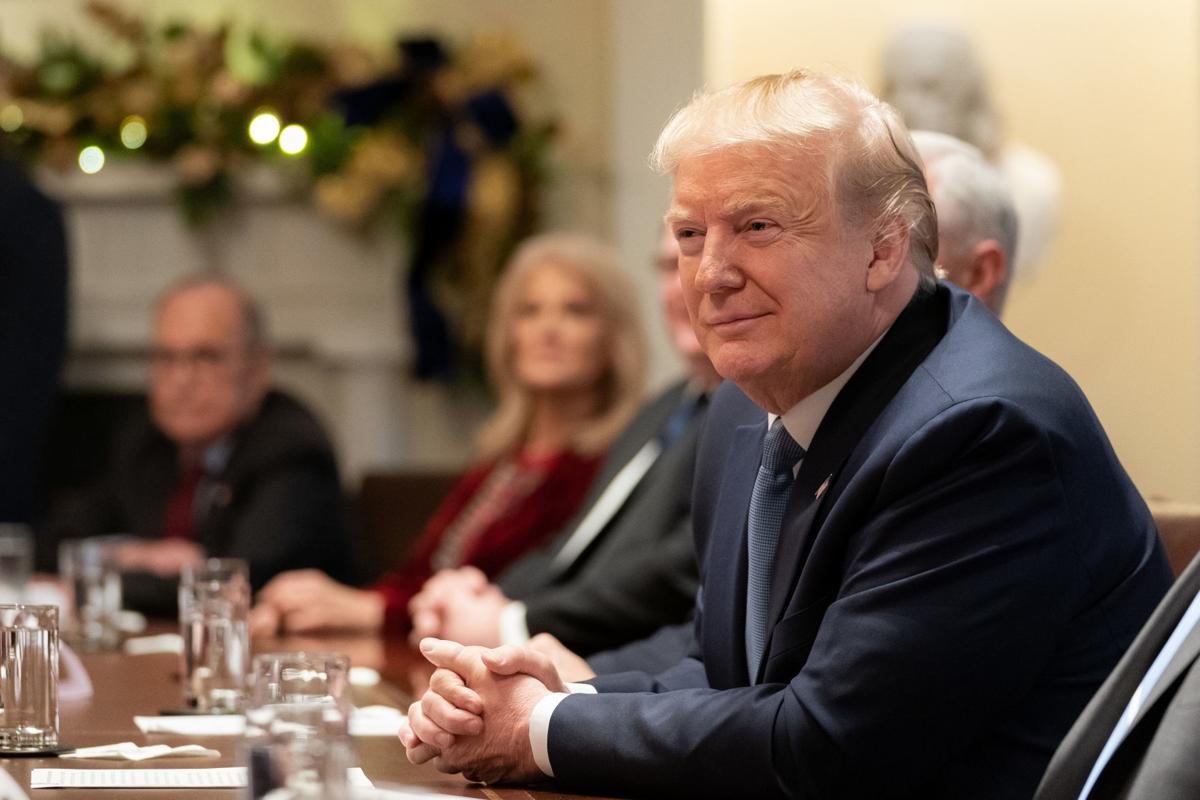 President Donald J. Trump, joined by Vice President Mike Pence, participates in a roundtable discussion on the Governors’ Initiative on Regulatory Innovation Monday, Dec. 16, 2019, in the Cabinet Room of the White House. 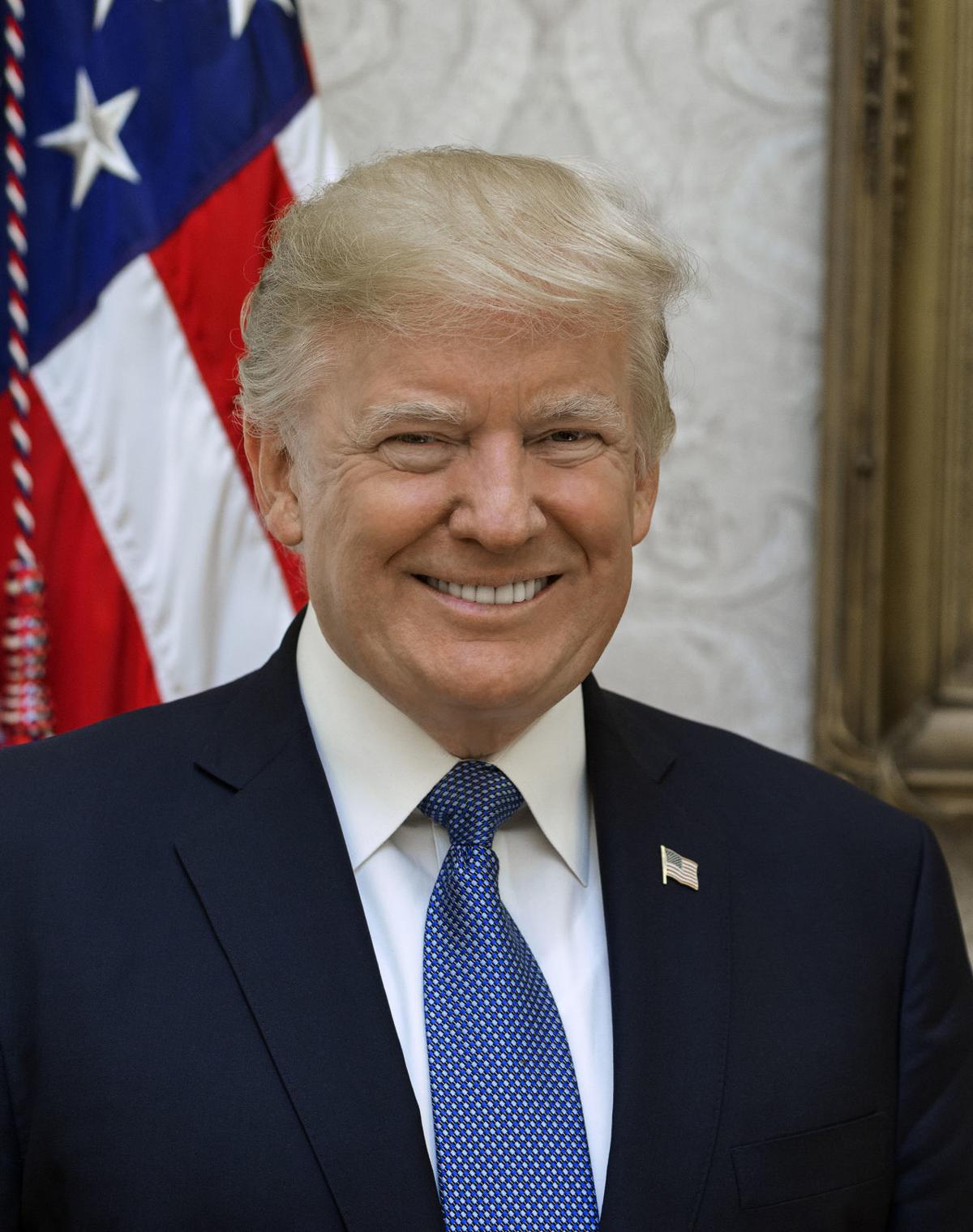 President Donald J. Trump, joined by Vice President Mike Pence, participates in a roundtable discussion on the Governors’ Initiative on Regulatory Innovation Monday, Dec. 16, 2019, in the Cabinet Room of the White House.

WASHINGTON, D.C. – For the third time in American history, the sitting president of the United States was impeached, or formally charged with crimes, by the U.S. House of Representatives as two articles of impeachment were approved on Wednesday, Dec. 18, against Republican President Donald Trump.

The two articles, abuse of power and obstruction of Congress, passed the Democratic-controlled House along partisan lines 230-197 and 229-198, respectively, with one “present” vote for each article. A simple majority was required to pass.

The charges allege that Trump solicited foreign interference from Ukrainian leaders to help his 2020 re-election bid, then told officials in his administration not to comply with Congressional subpoenas when asked to testify.

The N.C. delegation to the U.S. House voted along party lines, with the three Democrats voting in favor while the 10 Republicans were against.

U.S. Rep. Virginia Foxx, a Banner Elk Republican and steadfast supporter of Trump, spoke on the floor of the U.S. House against the impeachment articles before the vote.

“When Congress sees fit to exercise its solemn power of impeachment, it is imperative that it does so in genuine pursuit of justice: fairly, transparently and objectively,” Foxx said in a Dec. 18 statement. “This partisan impeachment has fallen far short of that. After years of investigations, hearings and millions of taxpayer dollars, Democrats found no proof that the president committed a crime, as the vague accusations in the articles of impeachment clearly reflected. These empty, baseless articles exposed for the American people what this is — a desperate, partisan attempt to avenge the loss of the Democrats’ preferred candidate in 2016.”

On Dec. 19, the Watauga Democrat reached out on Facebook for local comments on the impeachment. More than 100 comments were submitted in the first two hours.

“President Trump violated the law on national television by encouraging foreign powers to interfere in a U.S. election in violation of federal law,” said Matthew Robinson, an unaffiliated voter from Boone, when asked. “Even though it’s pointless to impeach him due to Republican control of the (U.S.) Senate, it was appropriate to charge him with high crimes and misdemeanors through impeachment.”

“Totally against the impeachment; I stand for those who support Israel,” said Donna Pennell, a Republican from Zionville.

“(I’m) ambivalent about impeachment. Trump is a symptom, capitalism is the disease,” said Elliott Triebenbache, a registered Democrat and “ideological socialist” from Boone, on Facebook. “The impeachment is absolutely warranted but won’t cure the problem at large. The partisanship the impeachment seems to have elicited is likewise unhelpful to our democracy. It’s easy to take up your pitchforks and vilify the other side but such activity is unproductive.”

“Totally ashamed of our government,” said Betty Ford Graybeal, a Boone Republican, on Facebook. “Democrats are mad they are not in control and here we are. What bothers me is the amount of ‘money’ that has been wasted on this witch hunt.”

“President Trump clearly used the power of his office to solicit an investigation from a foreign government into a debunked conspiracy theory to benefit himself and his political campaign,” said Pete Stephen, a Boone Republican, on Facebook. “U.S. intelligence agencies affirm that Russia, not Ukraine interfered in our elections. Using the power of political office to solicit political and personal gain is clearly an impeachable offense.”

“I’m not sure how I feel about the articles of impeachment,” said David Atkins Jr., a Boone resident who is unaffiliated, on Facebook. “I don’t think it’s as clear cut as some want to believe, and President Trump is definitely not as innocent as others want to believe. Oh, how we should all hope and pray that bipartisanship actually existed.”

“I do not believe it is acceptable for the president of the U.S. to ask Ukraine to investigate a political rival,” said Diane Tilson, chair of the Watauga County Democratic Party. “His actions set a precedent for future presidents to abuse the power of office for political gain and invites foreign powers to meddle in our elections. Our founding fathers, for obvious reasons, included this concern in the Constitution. It is the responsibility of Congress, and every citizen in the United States, to uphold the Constitution.”

“The U.S. House of Representatives voted in a purely partisan fashion to impeach our president, the president that the voters of America put in office,” the Watauga County Republican Party said in a statement. “The articles of impeachment that were voted on tonight fail to even allege a crime like previous impeachments. These weak articles are nothing more than an attempted coup by the Democratic Party to overthrow the will of the American people. Americans can now see what happens when the Democrats are in charge of the U.S. House which is nothing but sham investigations and hearings without due process. We are proud of U.S. Rep. Foxx for her bi-partisan vote against these sham articles. The Democrats in the U.S. House have wasted hundreds of hours and millions of dollars for nothing. Thankfully this attempted coup will die in the U.S. Senate.”

“Wednesday was a sad day for the country, but the N.C. legislature, where I serve, has no connection to yesterday’s events in Washington, D.C.,” N.C. Rep. Ray Russell, a Boone Democrat, said. “However, I witness N.C. legislative leaders abusing power, breaking N.C. House rules and deceiving the people of North Carolina every week. My focus is on shining a brighter light on misdeeds in Raleigh.”

N.C. Sen. Deanna Ballard, a Blowing Rock Republican, did not respond to a request to comment as of press time.

The impeachment charges now go the Republican-controlled U.S. Senate, which will hold a trial on whether to remove Trump from office. A two-thirds vote (67 of 100 senators) is required for removal from office. Republicans hold 53 of the seats and Senate leader Mitch McConnell, a Kentucky Republican, has stated there is “no chance” Trump is removed from office, according to media reports.

“House Democrats ran this blatantly partisan impeachment process like a kangaroo court, presuming the president was guilty and shamefully denying the president and the minority basic due process rights,” said U.S. Sen. Thom Tillis, a North Carolina Republican. “In spite of the lack of evidence they gathered and the facts not being on their side, they still voted to impeach the president to pander to their fringe base.”

North Carolina’s other U.S. Senator Richard Burr, a Republican, has not released a statement on the impeachment, previously stating he would withhold his opinion until a trial, according to media reports.

If the U.S. Senate votes to remove Trump from office, it would be the first time in American history it would have happened to a sitting president. The two previous U.S. Senate trials on presidential impeachment articles did not receive the two-thirds majority needed to convict.

The 17th U.S. president, Andrew Johnson, a Democrat, was impeached in 1868 on 11 counts of “high crimes and misdemeanors” by the Republican-controlled U.S. House for breaking a recently-passed law designed to protect cabinet members from being removed from office without congressional approval. Three of the articles went to a vote, with the Republican-controlled U.S. Senate falling one vote short of removal on all three accounts, 35-19, with several senators abstaining.

The 42nd U.S. president, Bill Clinton, a Democrat, was impeached by the Republican-controlled U.S. House on Dec. 19, 1998 for perjury and obstruction of justice stemming from a sexual harassment lawsuit and denying an affair he had with a White House intern. However, in February 1999, the Republican-controlled U.S. Senate votes to remove Clinton from office failed 45-55 and 50-50, respectively.

The 37th U.S. president, Richard Nixon, a Republican, had impeachment proceedings started against him by the U.S. House in late 1973 and early 1974 for his role in impeding the Watergate hotel break-in investigation. However, Nixon resigned the presidency on Aug. 9, 1975, after party support for him had evaporated, avoiding a formal impeachment vote.

To not call Trump on his rampant and blatant corruption would be to condone it like McConnell and the rest of the spineless GOP politicians.

I wouldn't bet on that, Boomer.