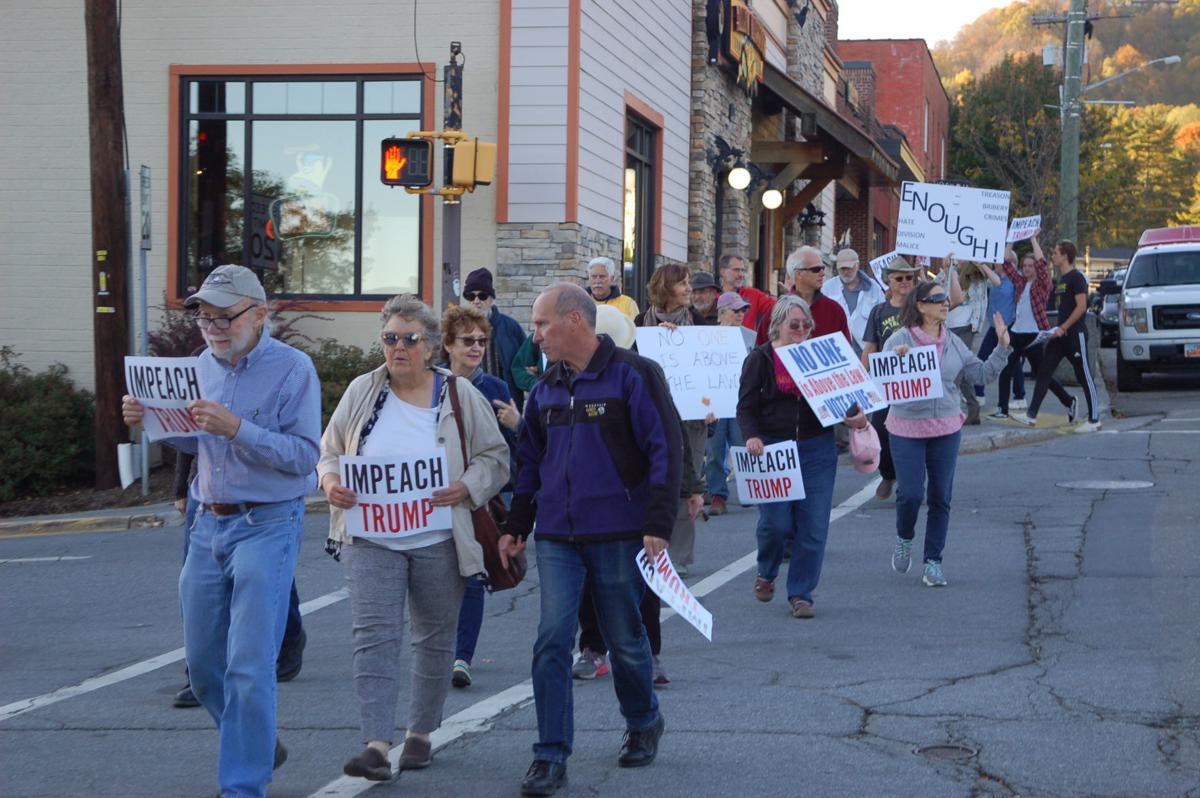 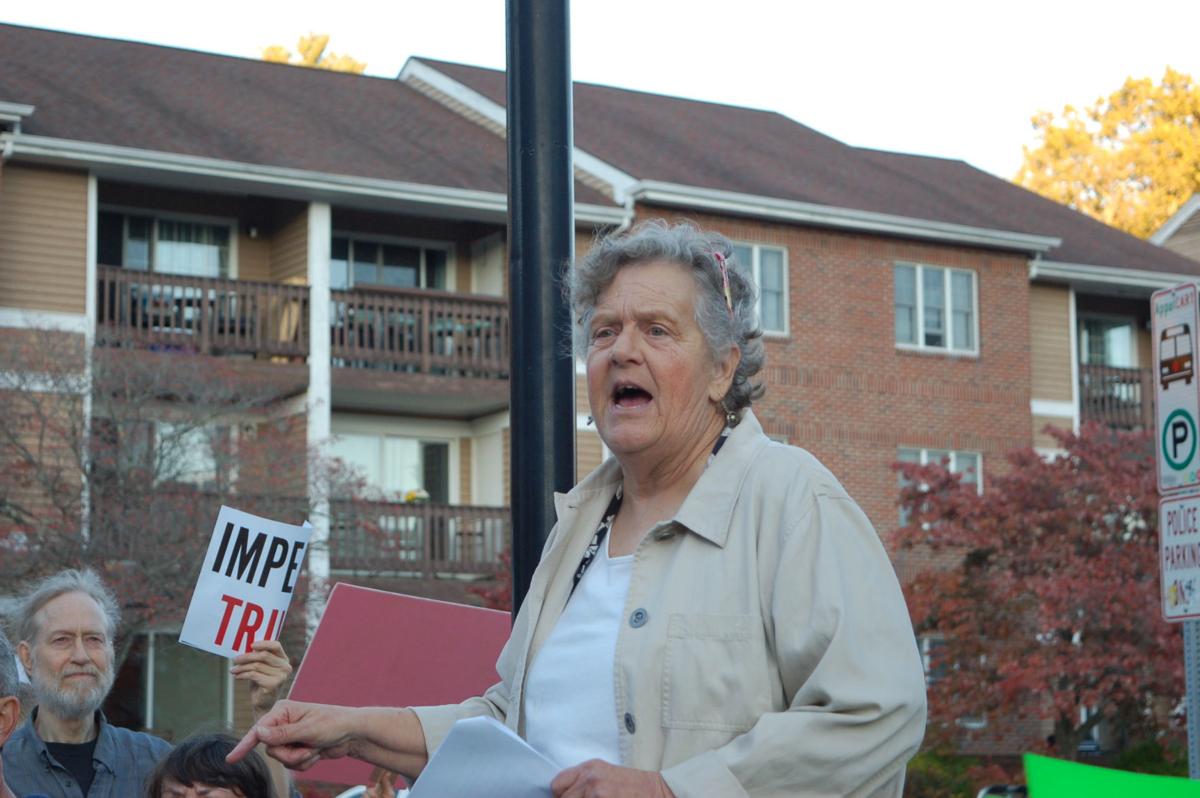 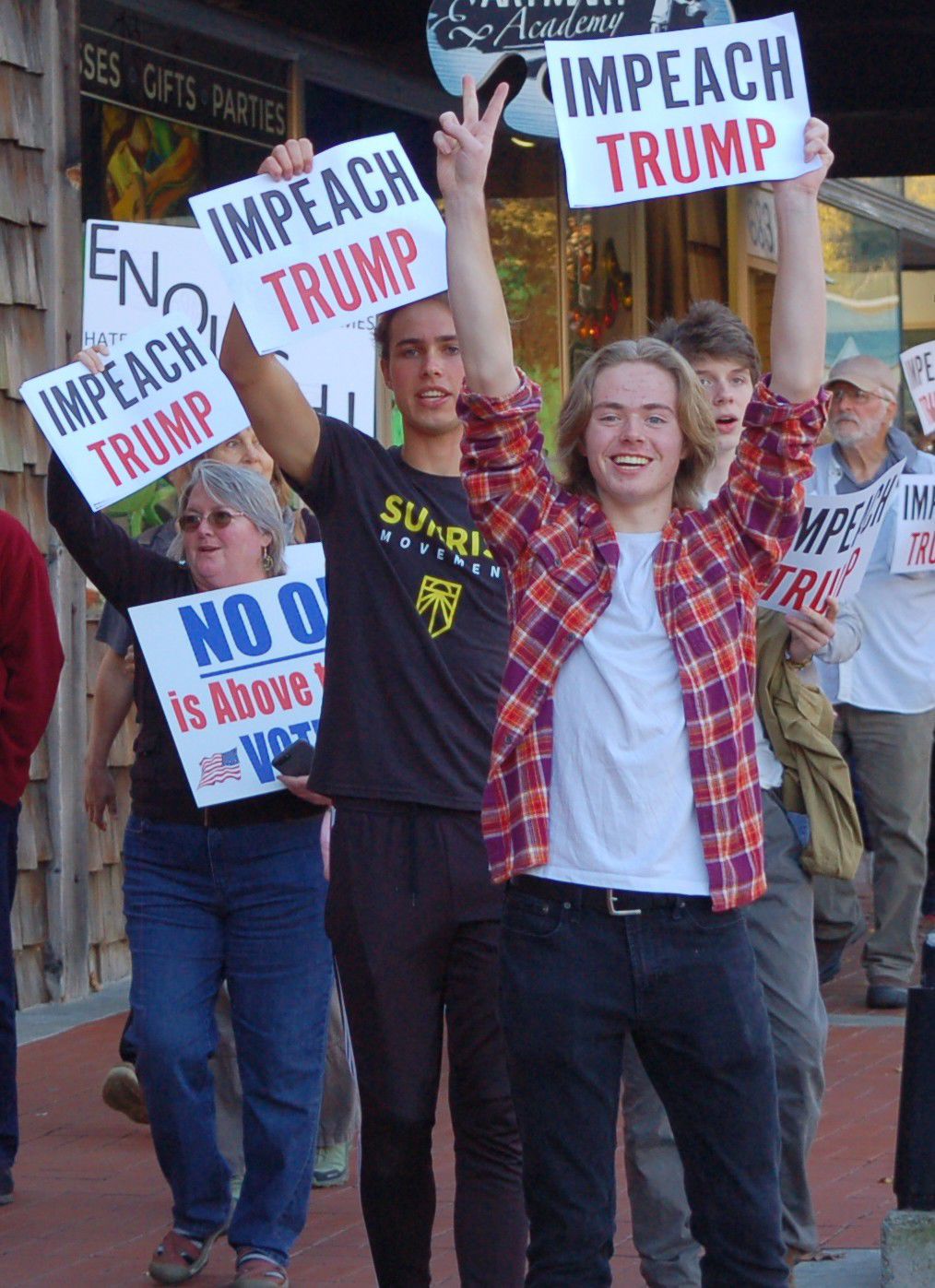 BOONE — Between 30 and 40 people marched along West King Street in downtown Boone demonstrating in favor of impeaching President Donald J. Trump in the late afternoon of Sunday, Oct. 27.

The event was organized by retired Appalachian State University professor and environmental advocate Harvard Ayers, who briefed attendees on the status of the U.S. House’s impeachment inquiry against Trump, which started Sept. 24 after a whistleblower’s report on what they claimed was Trump’s attempt to have foreign leaders investigate his political opponents. Current Boone Town Council candidate Nancy LaPlaca and Watauga High School student and Sunrise Movement of Boone leader Galen Miller spoke prior to the march.

Holding up signs that read “Impeach Trump” and other slogans that decried the president’s actions, protestors marched south on Depot Street to West King Street, going west to the Watauga County Administration Building, then east to Boone Town Hall. At Boone Town Hall, longtime local Democratic activist Pam Williamson spoke to the crowd about the case against the president and why he should be impeached, calling it the most deserved case of impeachment against a sitting U.S. president ever.

“Restraining presidential power has got to be the top priority for conservatives and liberals,” Williamson said.

The protest drew many reactions from passing motorists. Many shouted or honked in favor of the message, while others decried the protestors in support of the president as they drove by.

Confess to Impeachable offenses, you get impeached… It’s not Rocket Science.

Yup. But try getting that through the dense layers of cognitive dissonance his supporters are so skilled at manifesting. The headaches some of these poor folks must suffer from in their endless mental gymnastics has got to be exhausting.

Some of Boones sorriest to walk our streets

What is it that you hate so much about our country and constitution that you feel the need to run down your neighbors in this way? Shouldn't you be celebrating your neighbor's right to freedom of expression, freedom of speech, and freedom of assembly? You know, those rights at the very foundations of this country. Or do you only feel that way when it's folks that you already agree with?

Willful ignorance. Keep the students out of it. Allow them to speak for themselves.

You must not hang out with the younger generation much. These students *are* speaking for themselves. You clearly just happen to disagree with them. Boo hoo for you.

And what about this is in any way shape or form "willful ignorance." Please do explain. Bonus points for including citations.