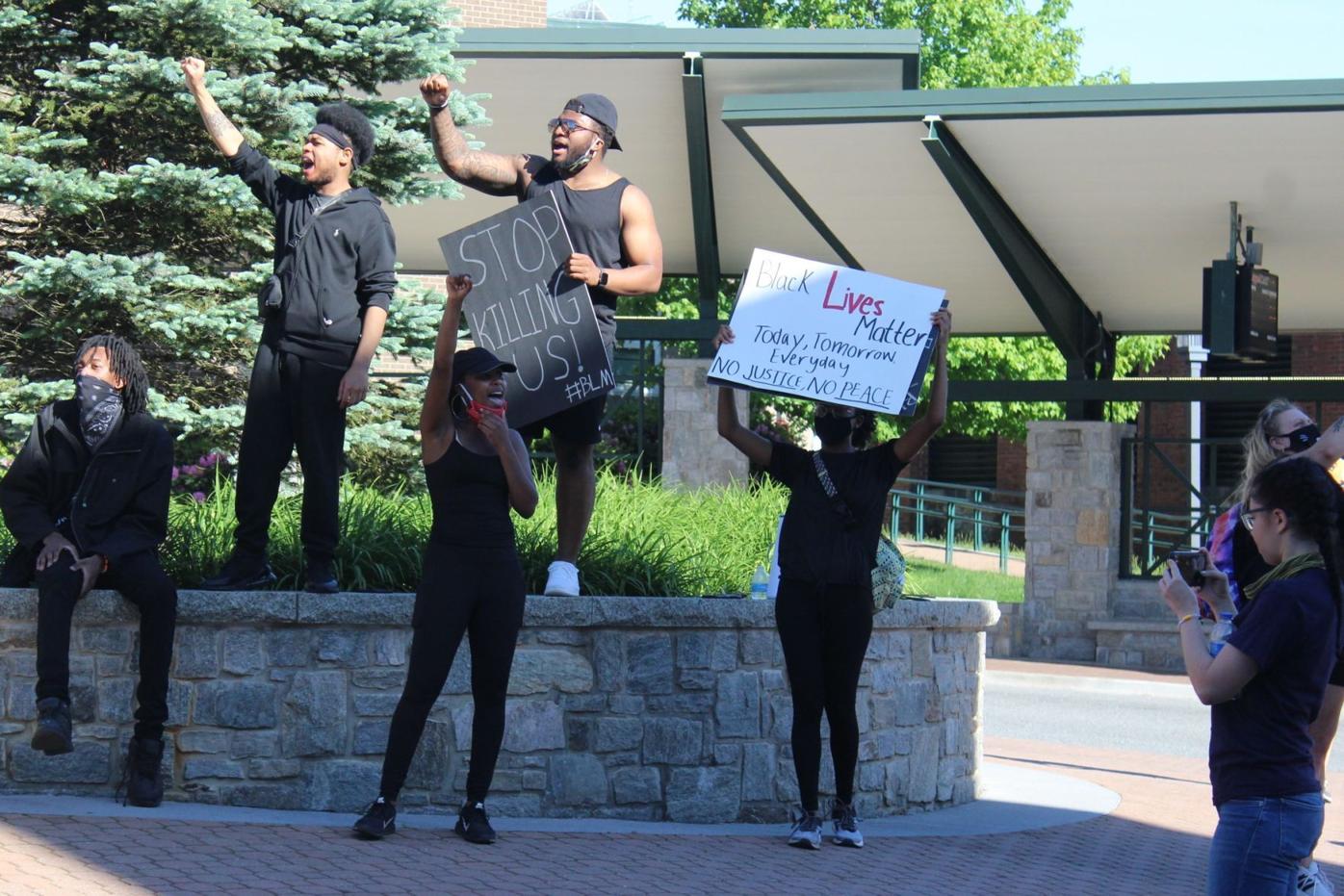 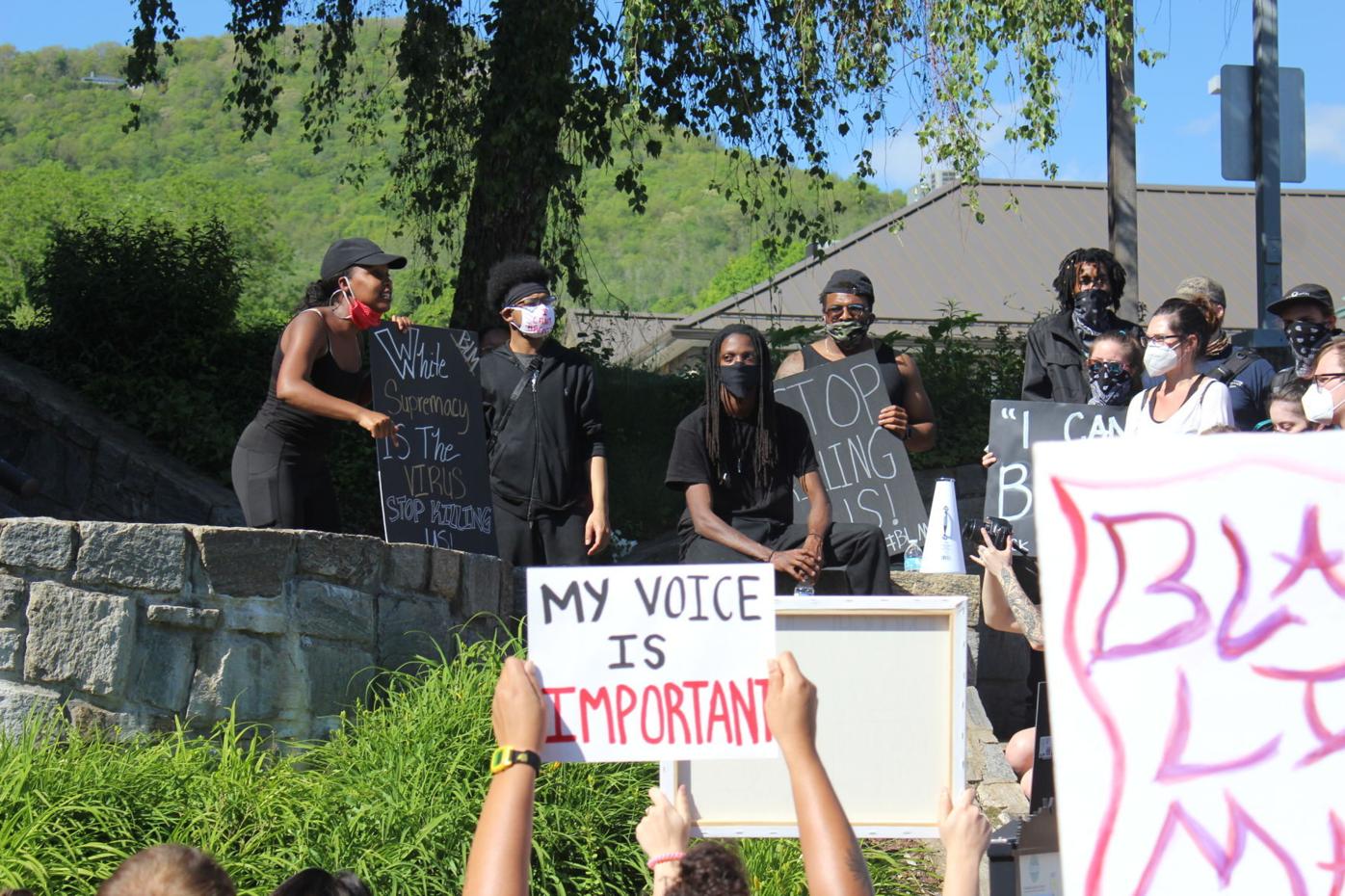 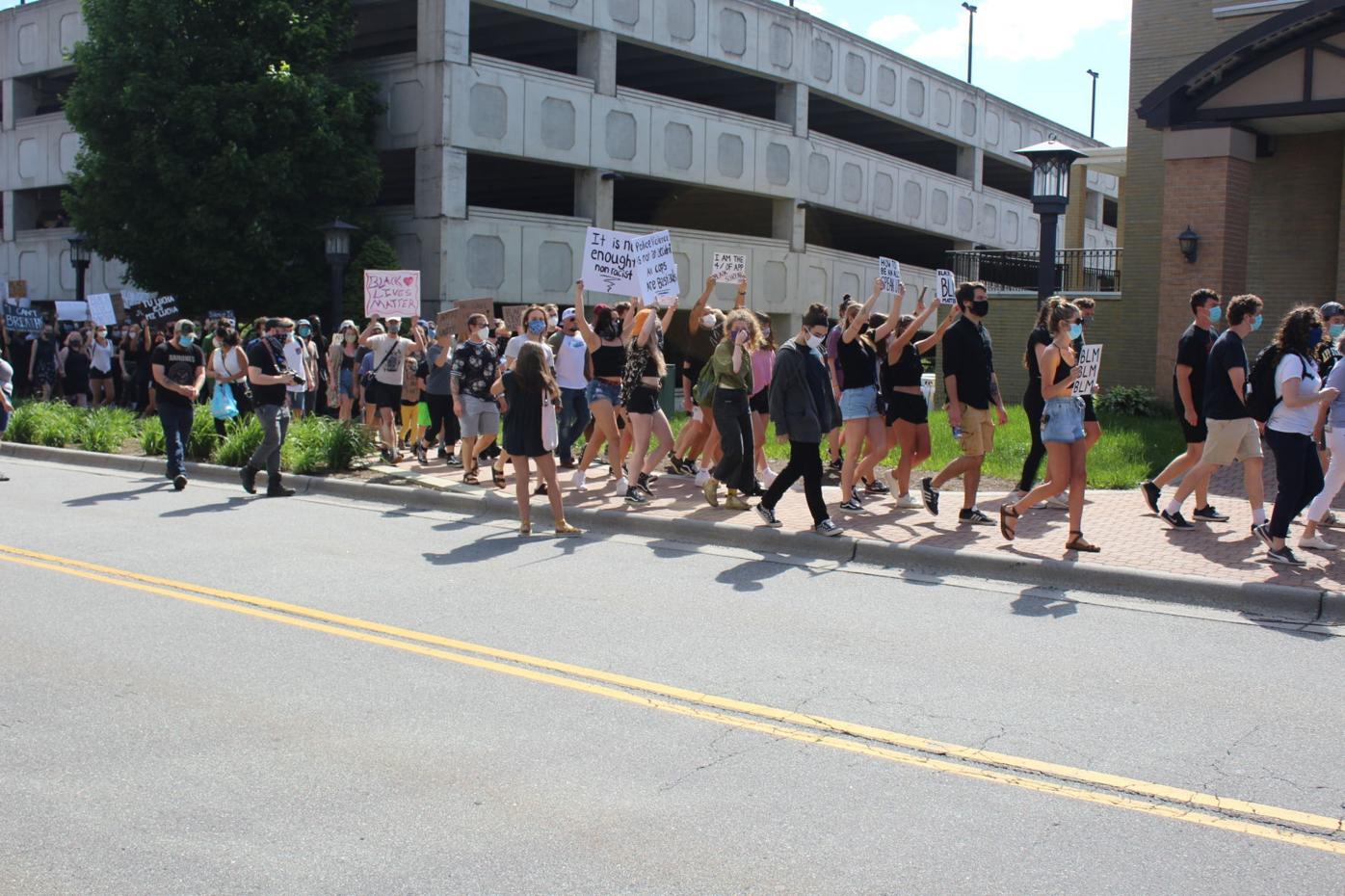 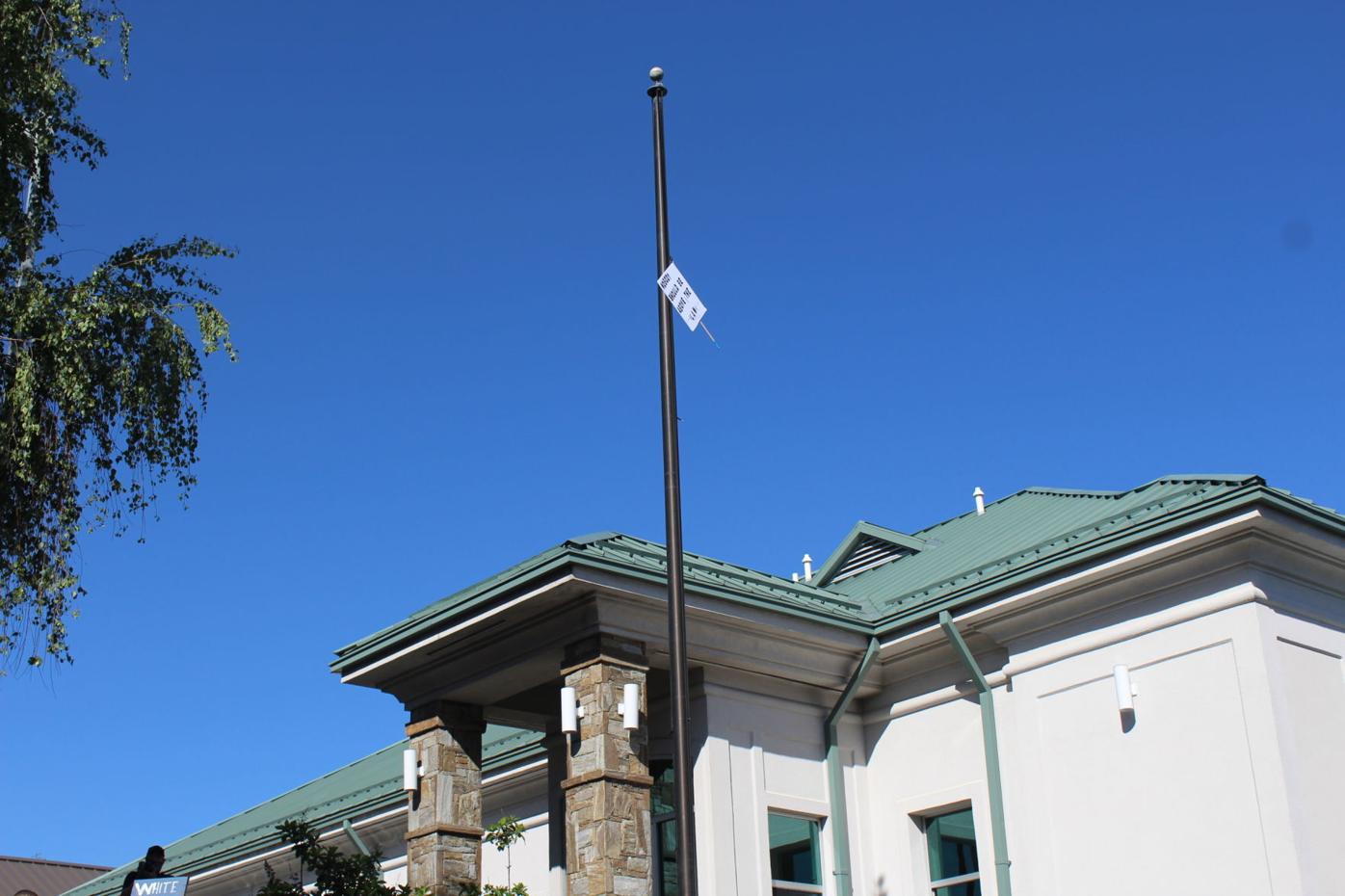 Gallery photo/Flag pole One protester at the May 31 march hoisted their sign on the flag pole beside of the Watauga County Courthouse. The sign reads, ‘Nobody should be above the law.’ 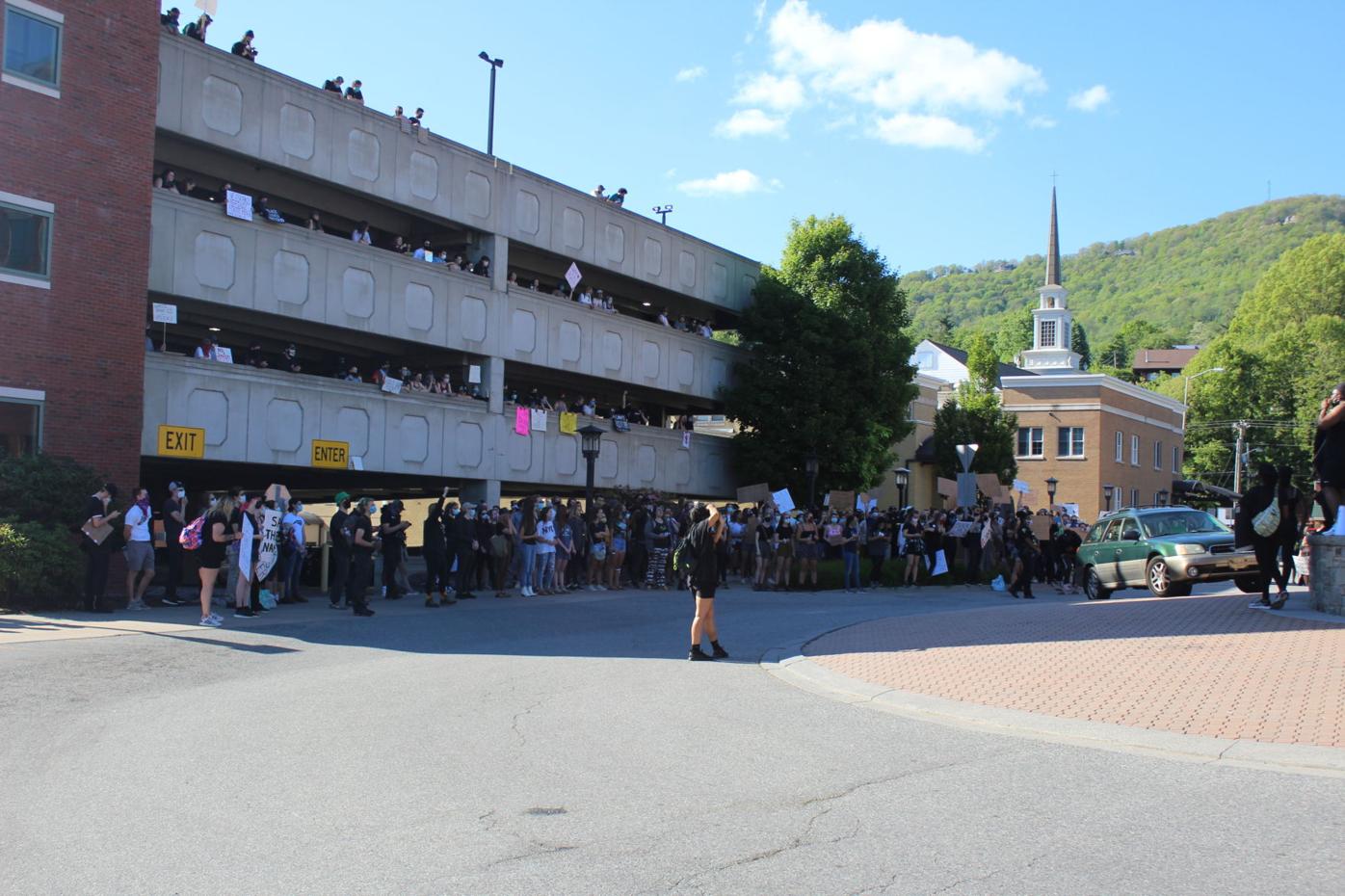 Upon the return to the App State Library Circle, protesters took to the parking deck to show their signs and support. 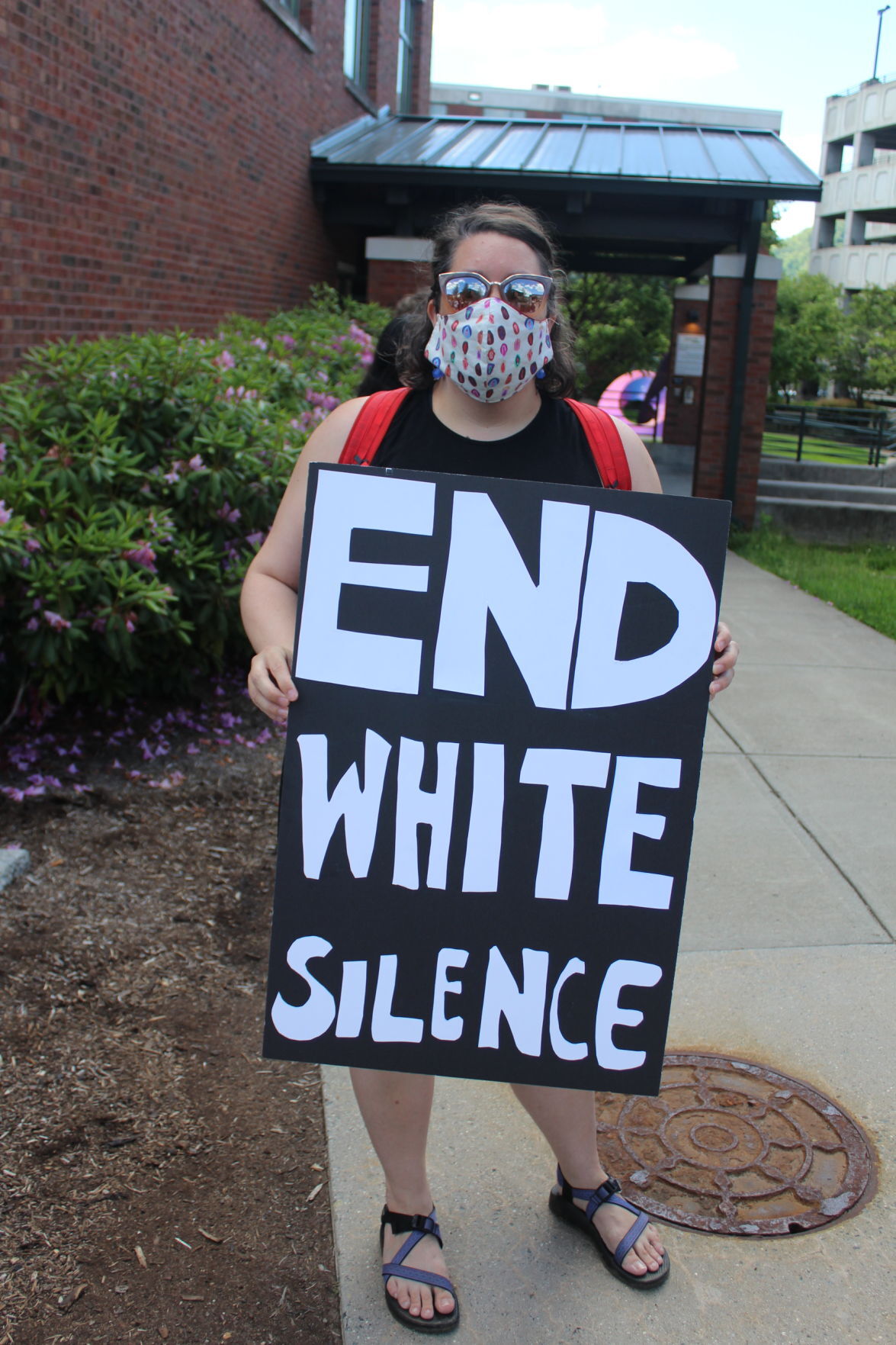 Sarah Hoffert marches with a sign that reads ‘End white silence’ during the May 31 BLM protest in Boone. 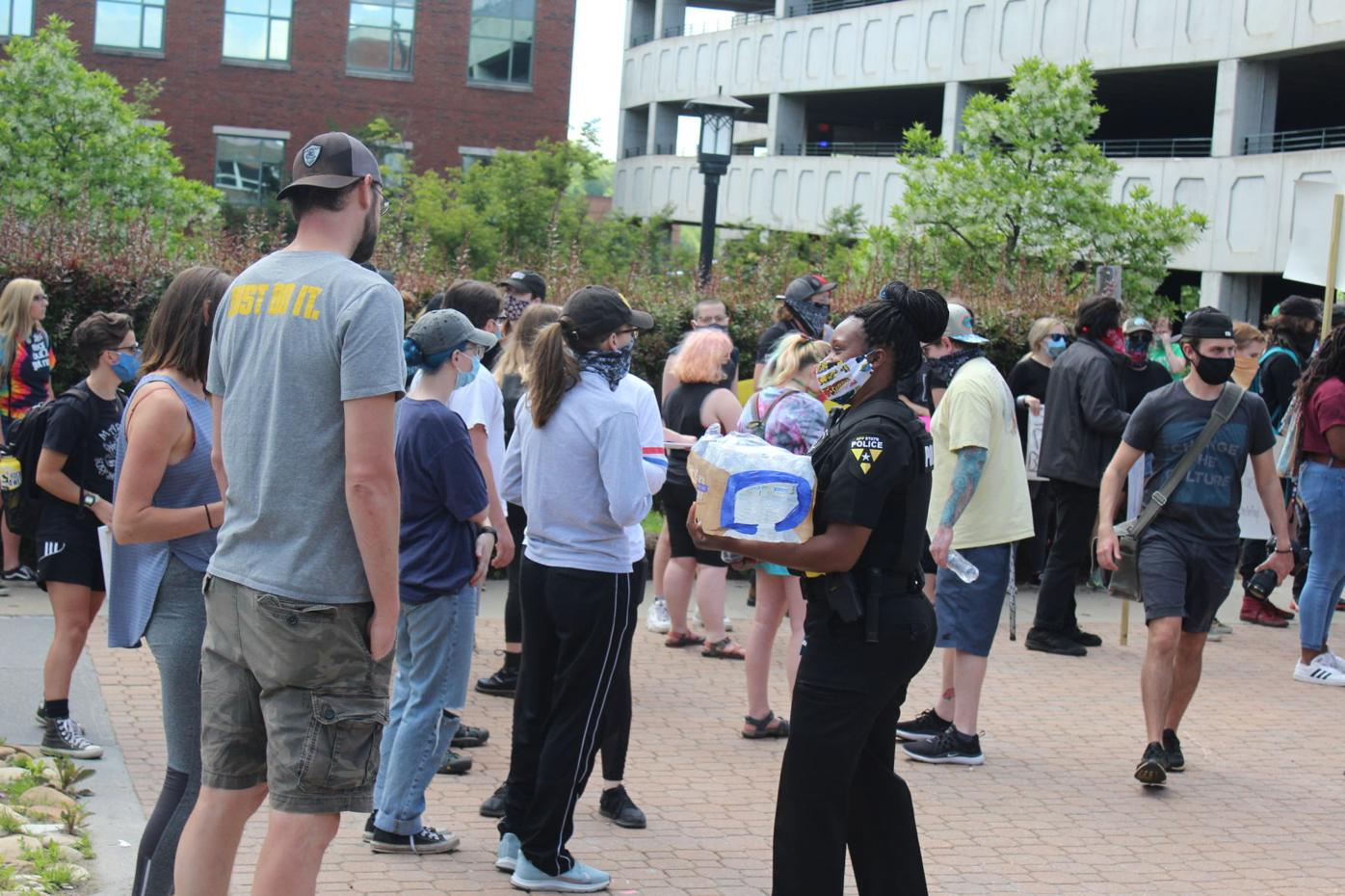 An App State Police Officer distributes water to protesters before the march begins. 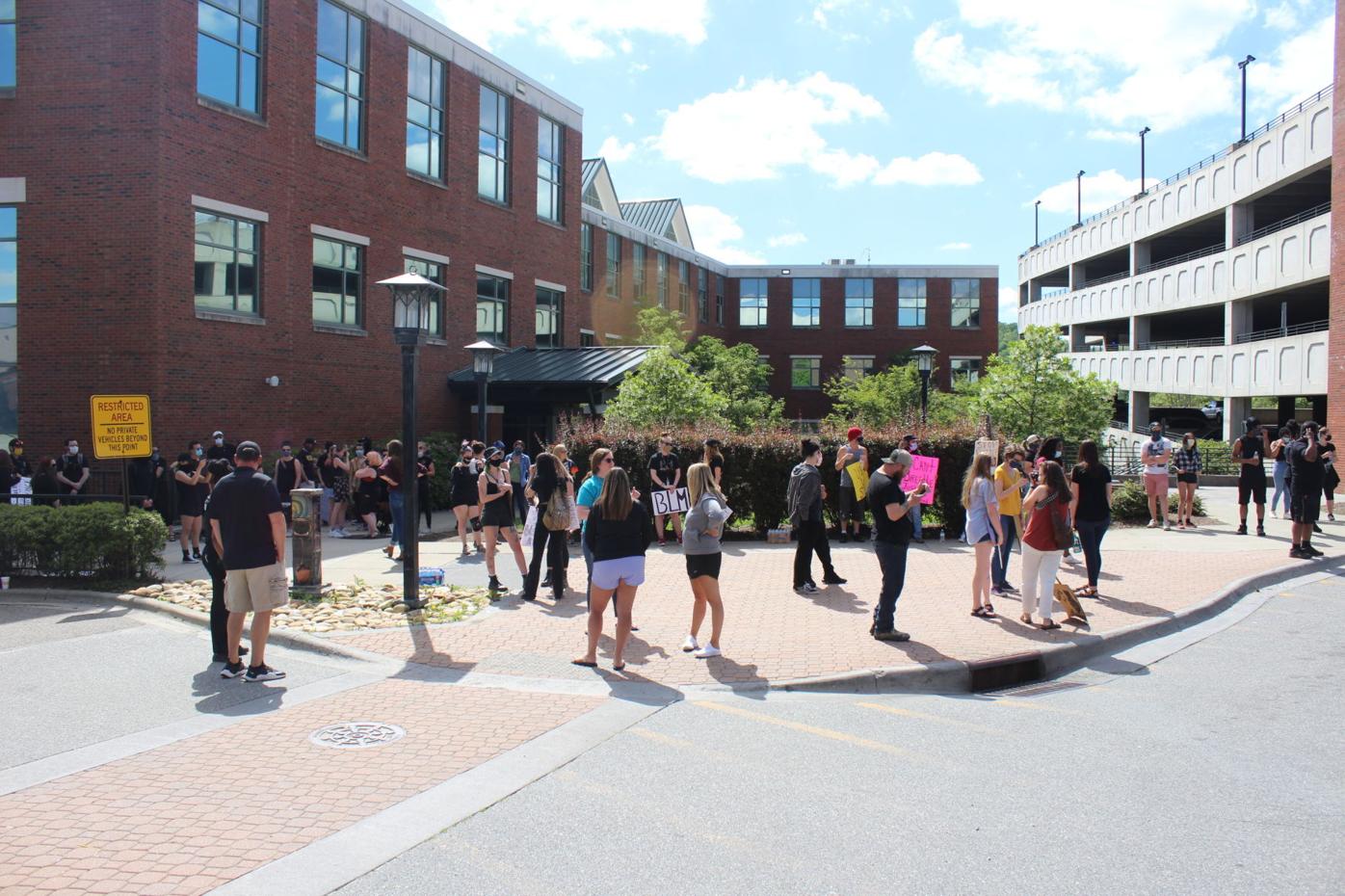 Protesters meet at the App State Library Circle to march down King Street to the Watauga County Courthouse. 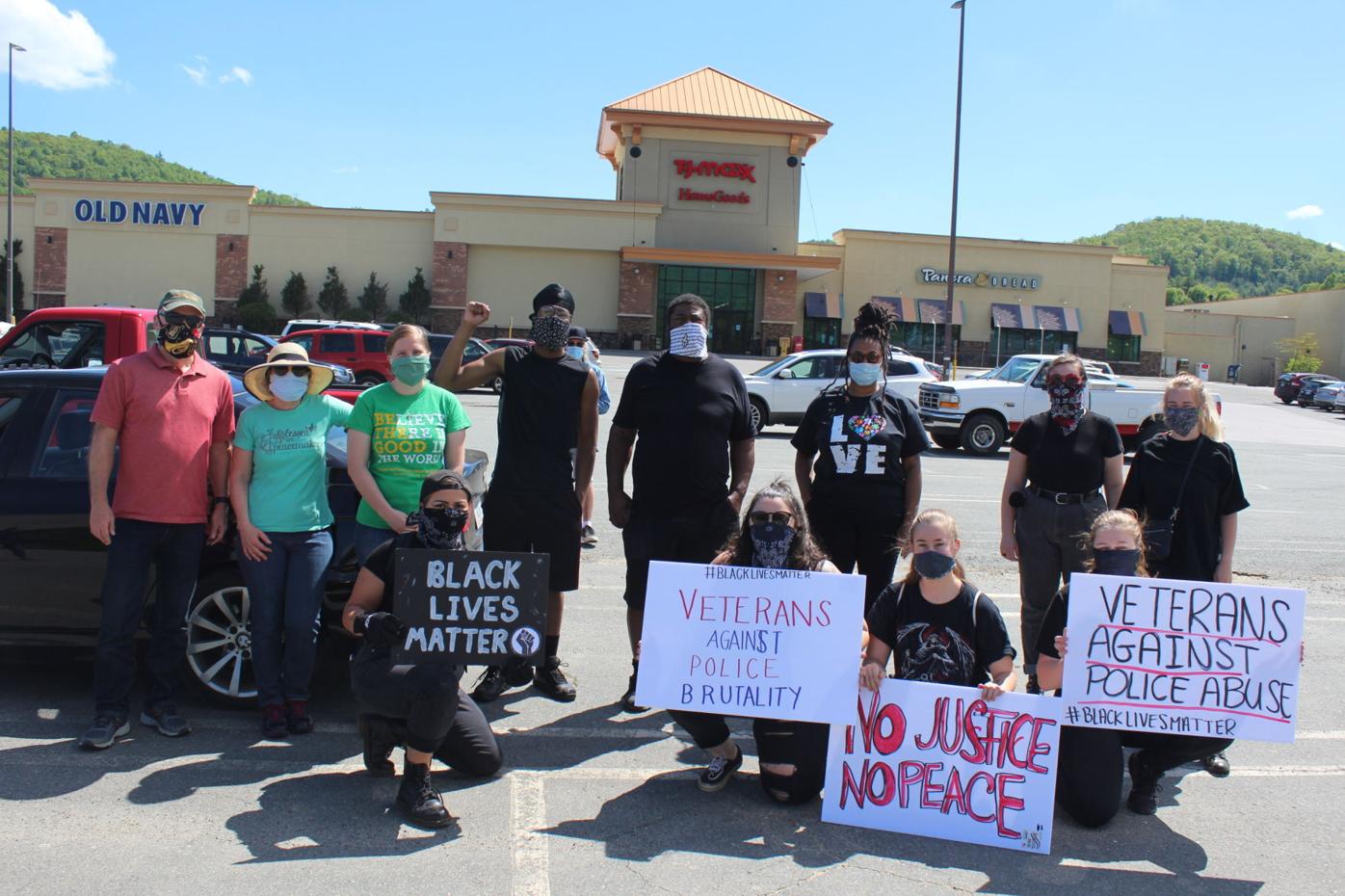 A group of protesters met at Boone Mall on May 31 to talk and then travel to the App State Library Circle together. 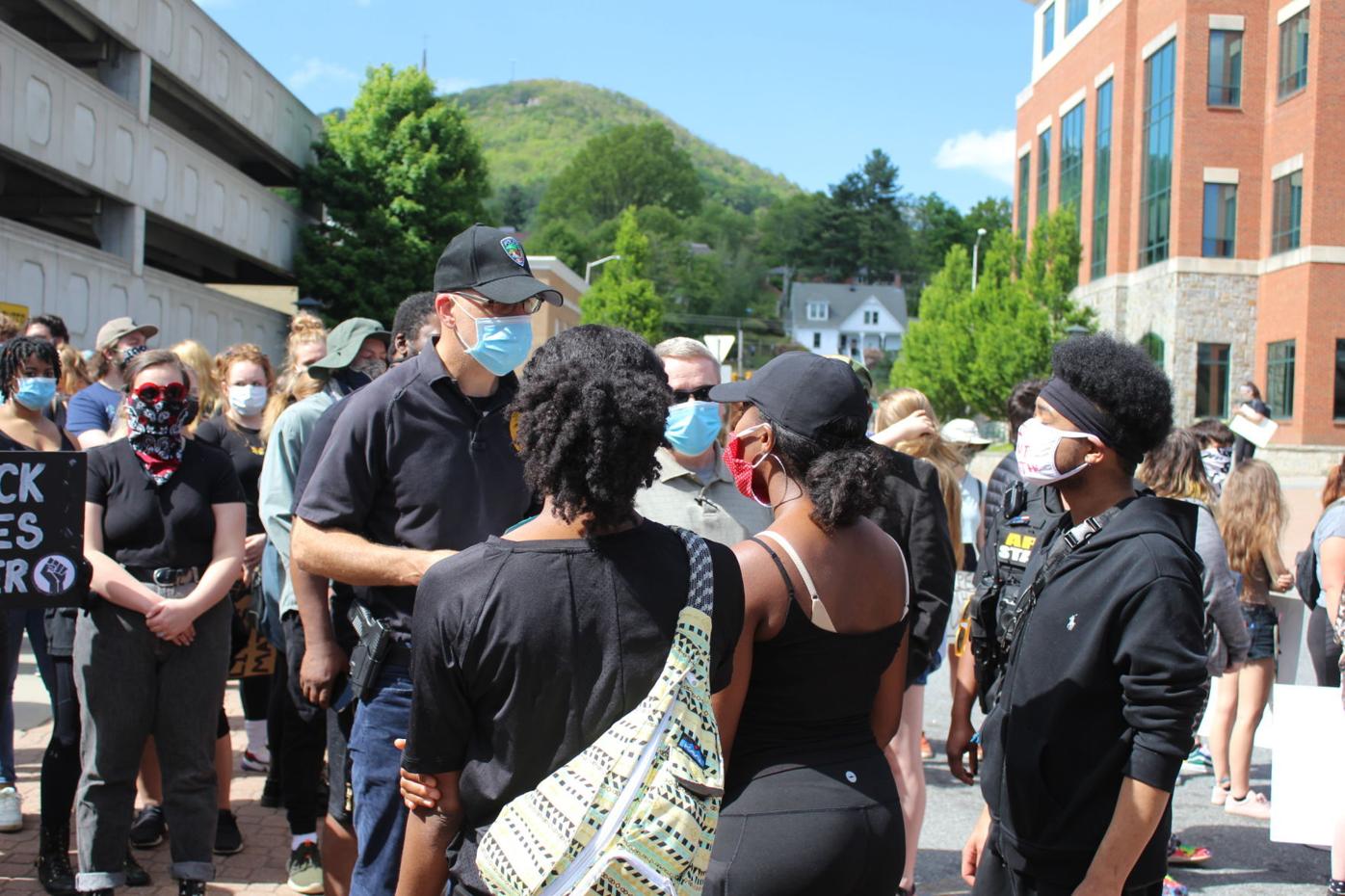 Interim Andy Le Beau talks to Kyndavee Bichara before the march begins on May 31. 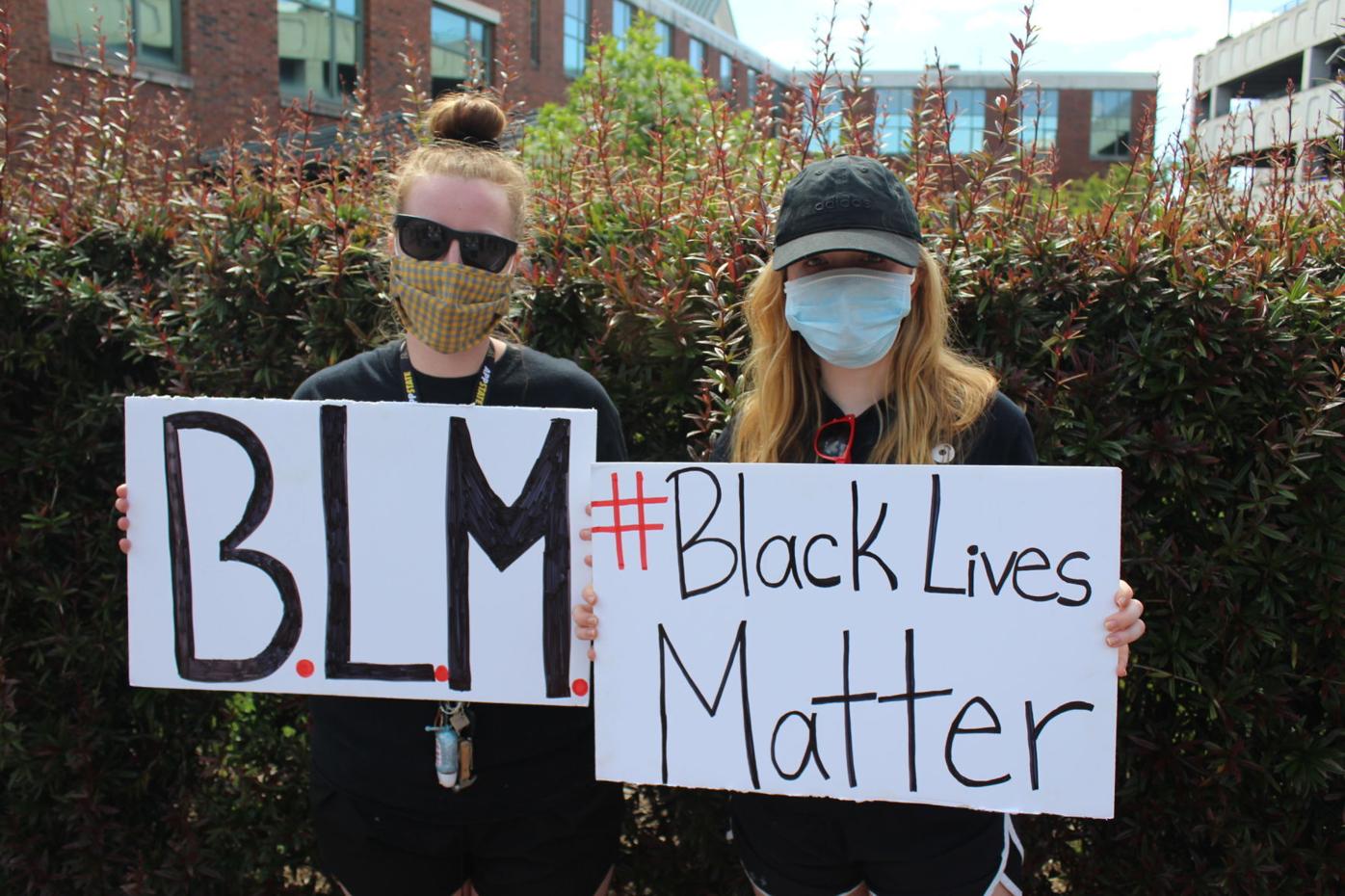 Bailey Witherspoon and Rachel Weaver participate in the BLM march. 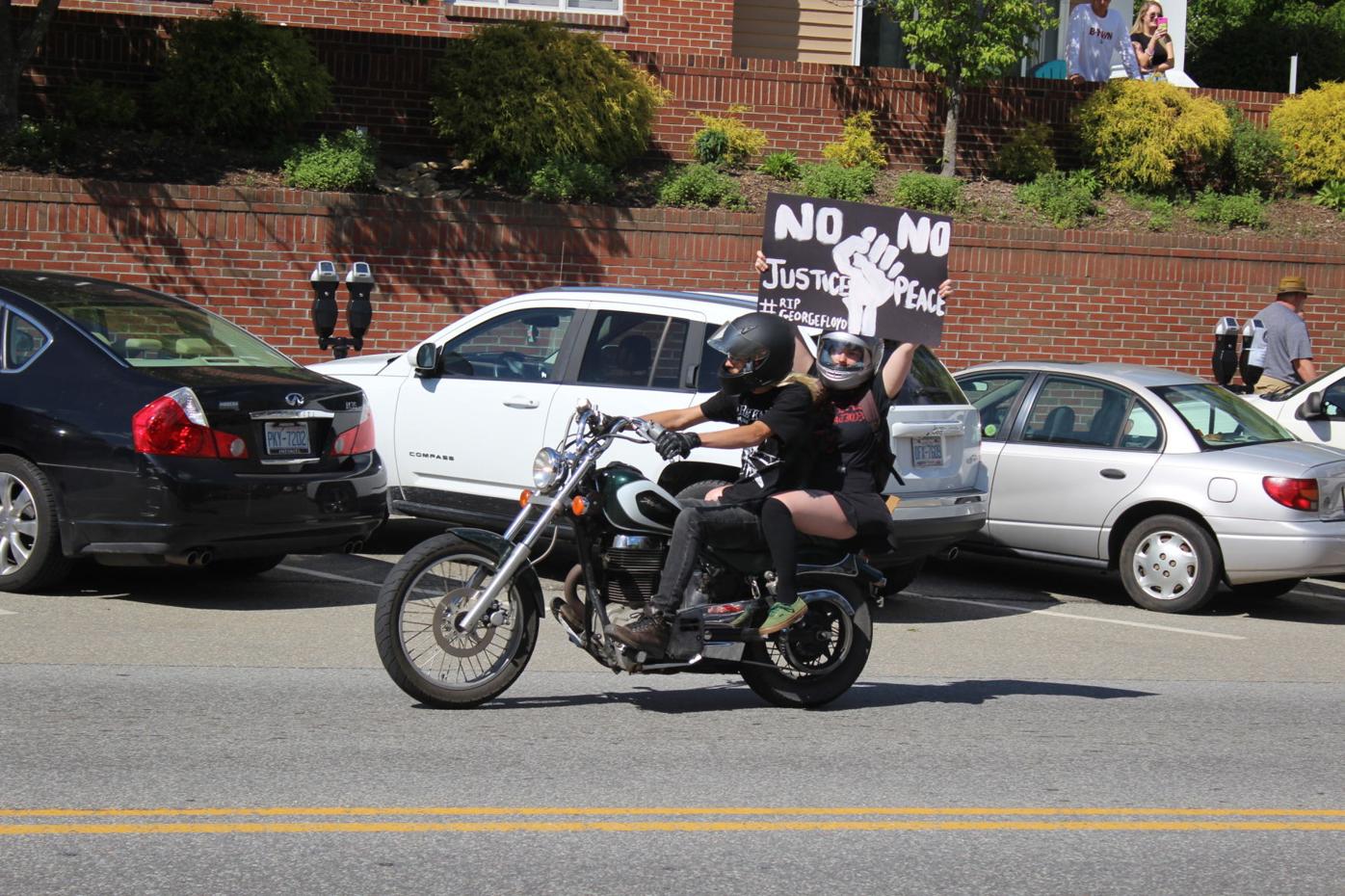 Several drivers on King Street during the march, including this motorcycle, showed their support through signs, honking or chanting along from their vehicles. 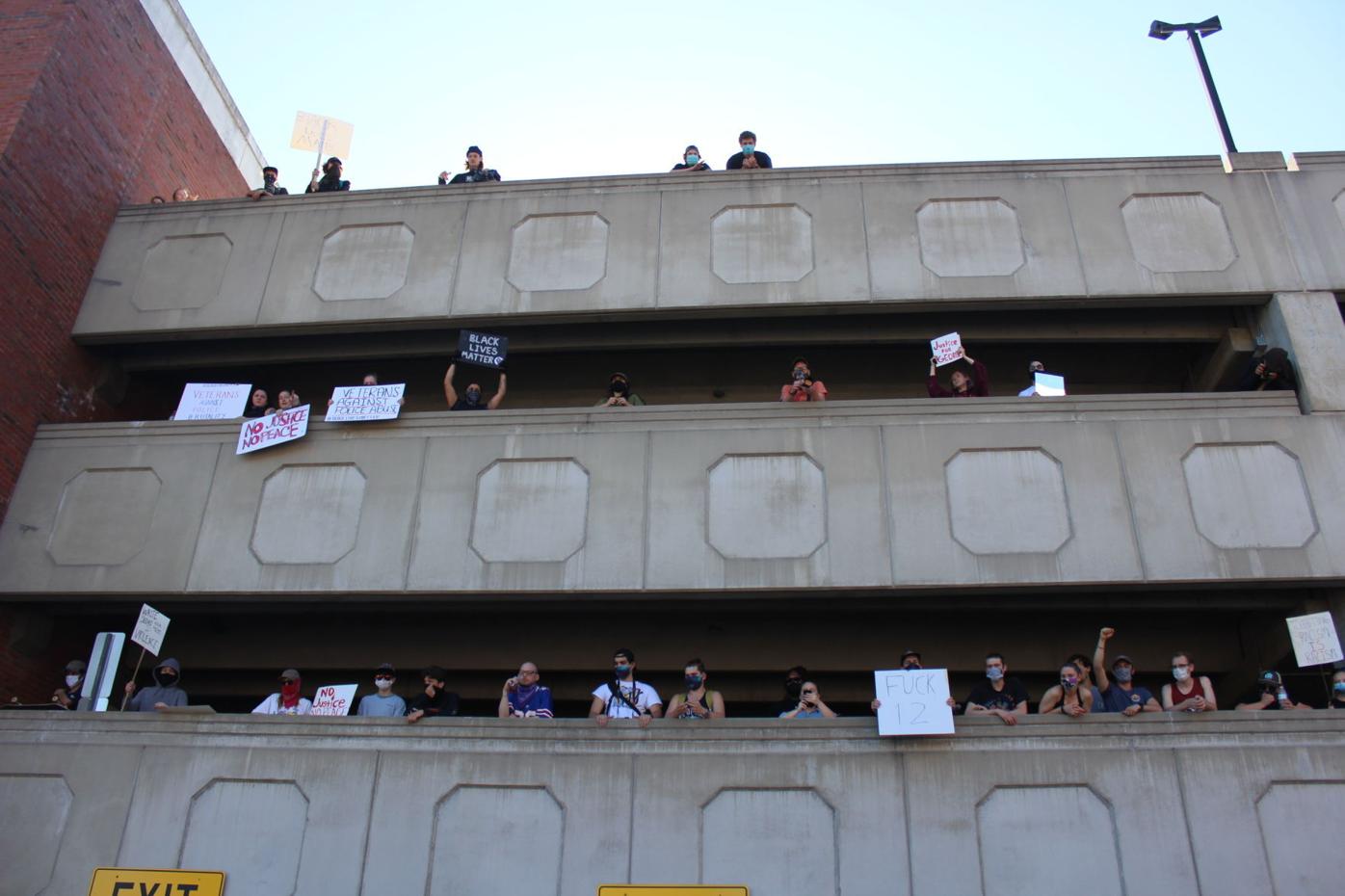 A Black Lives Matter demonstration and march organized by black students in Boone begins at the library traffic circle on the Appalachian State campus at 4:30 p.m. on Sunday, May 31, 2020. Video by Abby Whitt

BOONE — Hundreds marched in a Black Lives Matter protest in downtown Boone May 31, holding signs and chanting to protest racism and injustice in the wake of the May 25 death of George Floyd in Minneapolis.

The Boone event is one of many protests that have erupted across the country after a video circulated of Floyd being held on the ground by police officers, with Police Officer Derek Chauvin kneeling on his neck for over eight minutes while Floyd repeatedly told officers that he couldn’t breathe, according to the Hennepin County Attorney’s office. The 46-year-old Floyd, whose underlying health conditions included coronary artery disease and hypertensive heart disease, became unresponsive and was later pronounced dead at a hospital, according to the office. Chauvin was charged with third-degree murder and second-degree manslaughter.

The march began at College Street on the Appalachian State University campus and proceeded along King Street to the Watauga County Courthouse.

“We’re all here today because we have witnessed the wrong killing of too many black people. We need to stand up, no matter who you are, against injustice,” said Kyndavee Bichara, one of the events’ organizers, before the march. “So today we’re going to walk King Street in solidarity with all of the African-Americans across the country who are protesting against the killing — the murdering — of black people.”

The organizers, who are students at App State, had a moment before the protest to talk with law enforcement officers, who assured them that the protest had their full support.

“We’re with you on this,” said Andy Le Beau, interim police chief of Boone Police Department, who then asked if it would be alright if “some of us walk with you.”

Markell Clark, one of the leaders of the march, said, “There were so many people that played a role in organizing this. Some of them weren’t able to be present or were more involved with the crowd.”

Mary Lyons — a BLM activist who organized a protest in 2014 in Boone as a student at App State because of the deaths of Michael Brown and Eric Garner — was a prominent voice at the courthouse. Lyons also founded the Solidarity and Appalachian Social Justice Educators group at App State.

“This is just the first of a long line of steps. This is not easy, but we can do more. More of Boone than what’s out here cares about this fight,” Lyons said, noting that “we’re still in a global pandemic” and not everyone who wanted to attend was able to.

Bichara told the gathered protesters that she has younger siblings — two of which are young black men.

Also at the courthouse, Lyons read the names of black Americans who have been killed by law enforcement, including Tamir Rice, Trayvon Martin, Eric Garner, Breona Taylor and Tony McDade, along with others. The crowd chanted the names back to her three times before moving on to the next one.

The group then kneeled, some on King Street, others on the adjacent sidewalks, to observe eight minutes of silence, a reference to the amount of time Floyd struggled to breathe due to the knee on his neck.

Following the march to the courthouse and upon the completion of speeches, protesters marched back to the App State library traffic circle, where the group continued to gather even after the organized protest was over. Some activists held their signs on the various levels of the library’s parking deck while more names of killed black Americans were once more read and echoed.

“It went amazing, a lot of people showed out, a lot of people showed support. We kept it a peaceful protest as we planned, and we didn’t have any hecklers or anything like that happen. I think we got our point across,” said Bichara at about 6:30 p.m., when the protest was winding down. “The work still goes on; we still need to continue. It doesn’t stop here — it doesn’t stop with the protest. We’re going to continue to be out here, we’re going to be continuing to do what we need to do in order to make this country more equal. Until we have equity, we can’t have equality, so we’re going to work on equity right now.”

Lucinda Bowers, 57, has lived in Boone for 30 years. She attended the May 31 protest, saying she believed history was being made.

She said she was angry for many years about racist actions against her family and other injustices she had witnessed and experienced, but her faith in God changed her heart.

“My grandmother told us that you never see color in anyone,” Bowers said. “It’s time for us to come together because God loves us all no matter what color our skin is or who we are.”

Organizer Colbie Lofton said, “In the midst of other protests going on and a lot of confusion, I think a lot of people were here for the right reasons. I’m happy there were no counter protests going on, which is one thing we were kind of worried about before we came out … We want people to acknowledge their privilege and use it for the better to assist the community. It’s not just about today, and it’s not just about showing up to these events. It’s about creating change, changing the mindsets of people and, also if we can, voting in numbers to change legislative rule.”

At the end of the protest, Le Beau said, “I was happy that so many people turned out, determined to have a peaceful event but get their points across that events like what happened in Minneapolis are unacceptable. I always tell people that I can’t necessarily control what happens in the rest of the country, but I can have a big influence on what happens in Boone.

“We do training for racial bias, and we work on issues so that what happened in Minneapolis never happens in Boone,” he said. “We have a long history of working with groups like the Watauga County NAACP chapter … and in the wake of this, we’re committed to working with all people groups because it’s our job to serve everybody, no matter what their color, religion or sexual orientation. That’s what Boone Police Department is all about.”

To assist in the effort of continual change and achieving true equality, Lyons has created a Facebook page titled “Black in Boone,” which is a “Black-led advocacy group for racial justice and black flourishing in our communities.”

There are also goals set up for the page, including “developing a black-led community advocacy group for racial justice and black flourishing,” “implementing anti-racism training and strategic structures in every church, school, agency and business in our local communities,” and “launching a black barber/beauty shop and support other black cultural expression in Boone.”

The page can be found at https://www.facebook.com/BlackInBoone.

This isn't a local community rally. Why? Where did all these people come from?

Dude...what? The heck you goin' on about?

Yeah, the irony of "sickofstupid" posting something so stupid hasn't been lost on us. That they are surprised so many people of color live in Boone (and yes, just about everyone there was a resident) suggests they really need to get out a little more (well, a lot more really - but wear a mask, OK?).