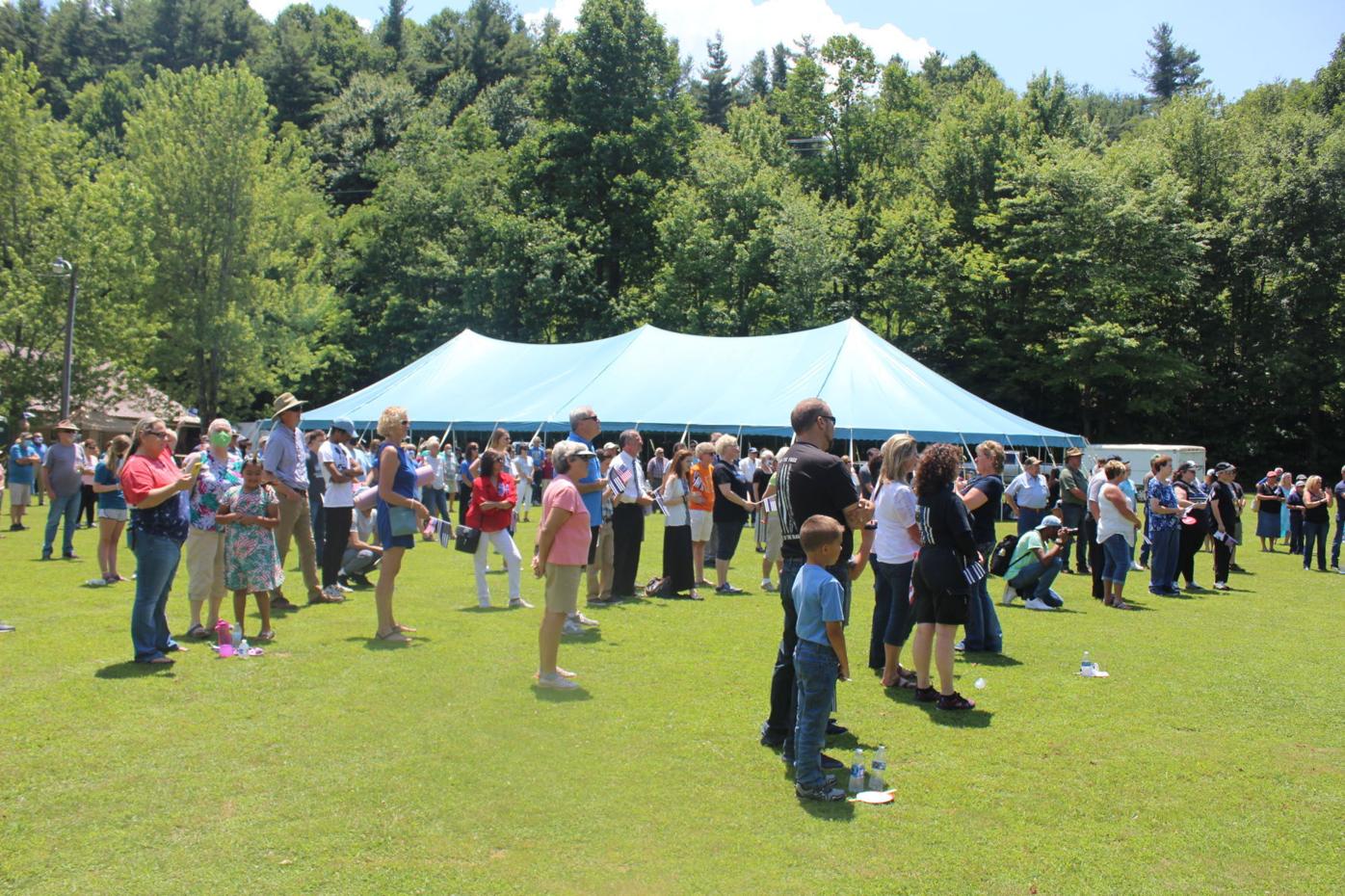 Hundreds gather on the lawn of Bibleway Baptist Church in Boone on July 18 for a Back the Blue event to show support for local law enforcement. 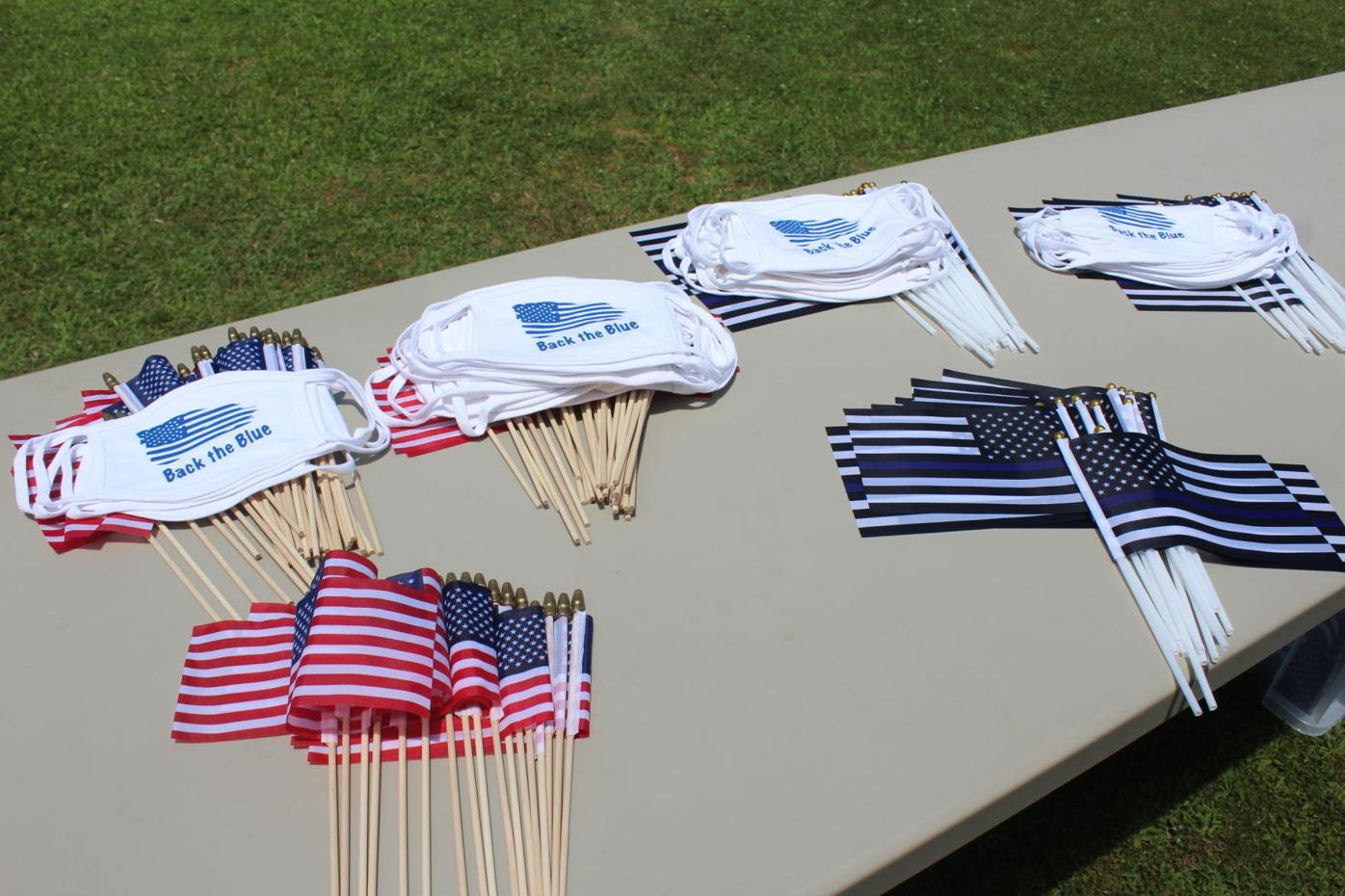 American stick flags, Thin Blue Line stick flags and white, cotton ‘Back the Blue’ face masks were available to attendees of the Back the Blue rally in Boone on July 18. 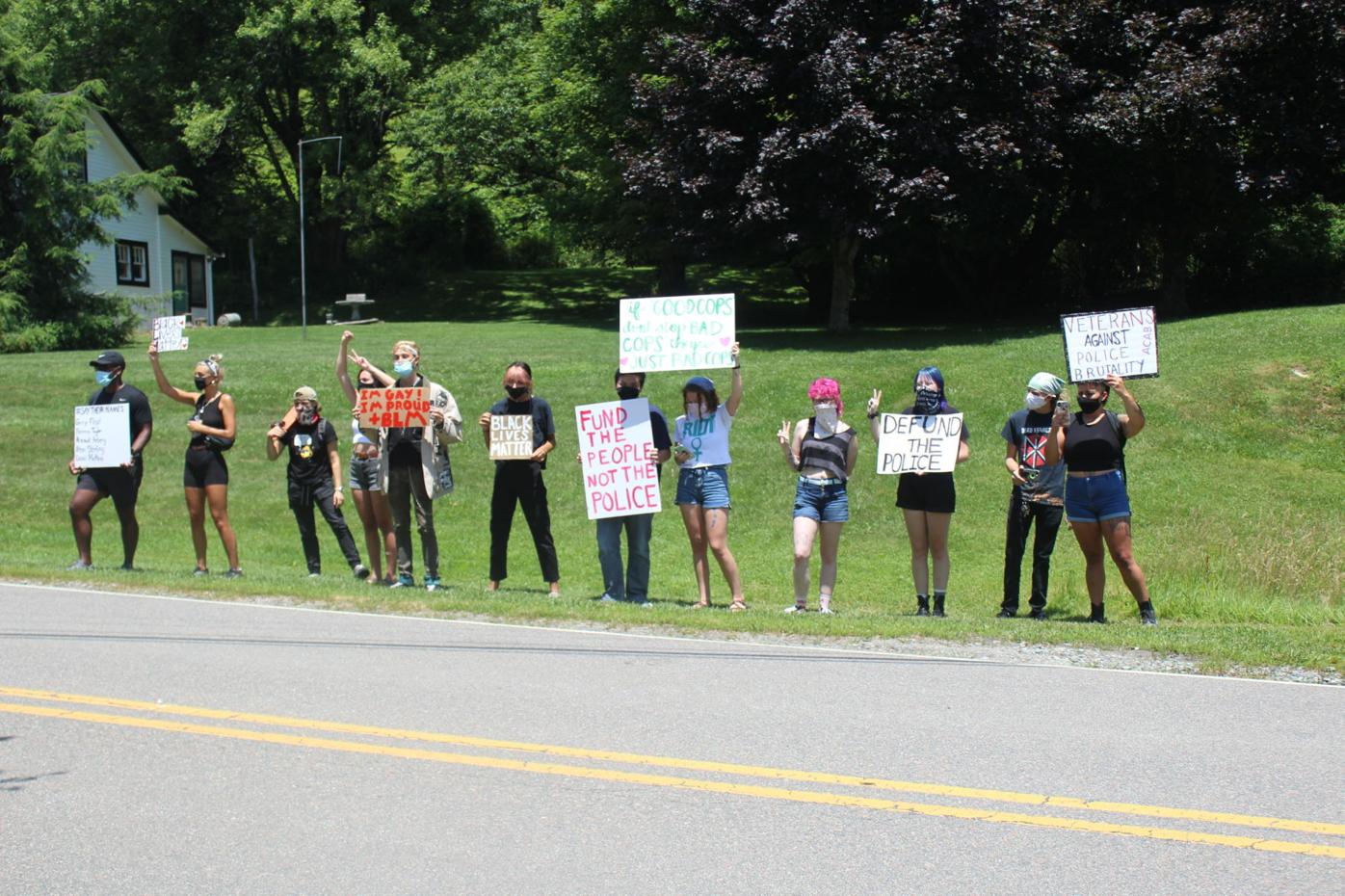 Protesters stand across the road from Bibleway Baptist Church in Boone during the Back the Blue rally on July 18. 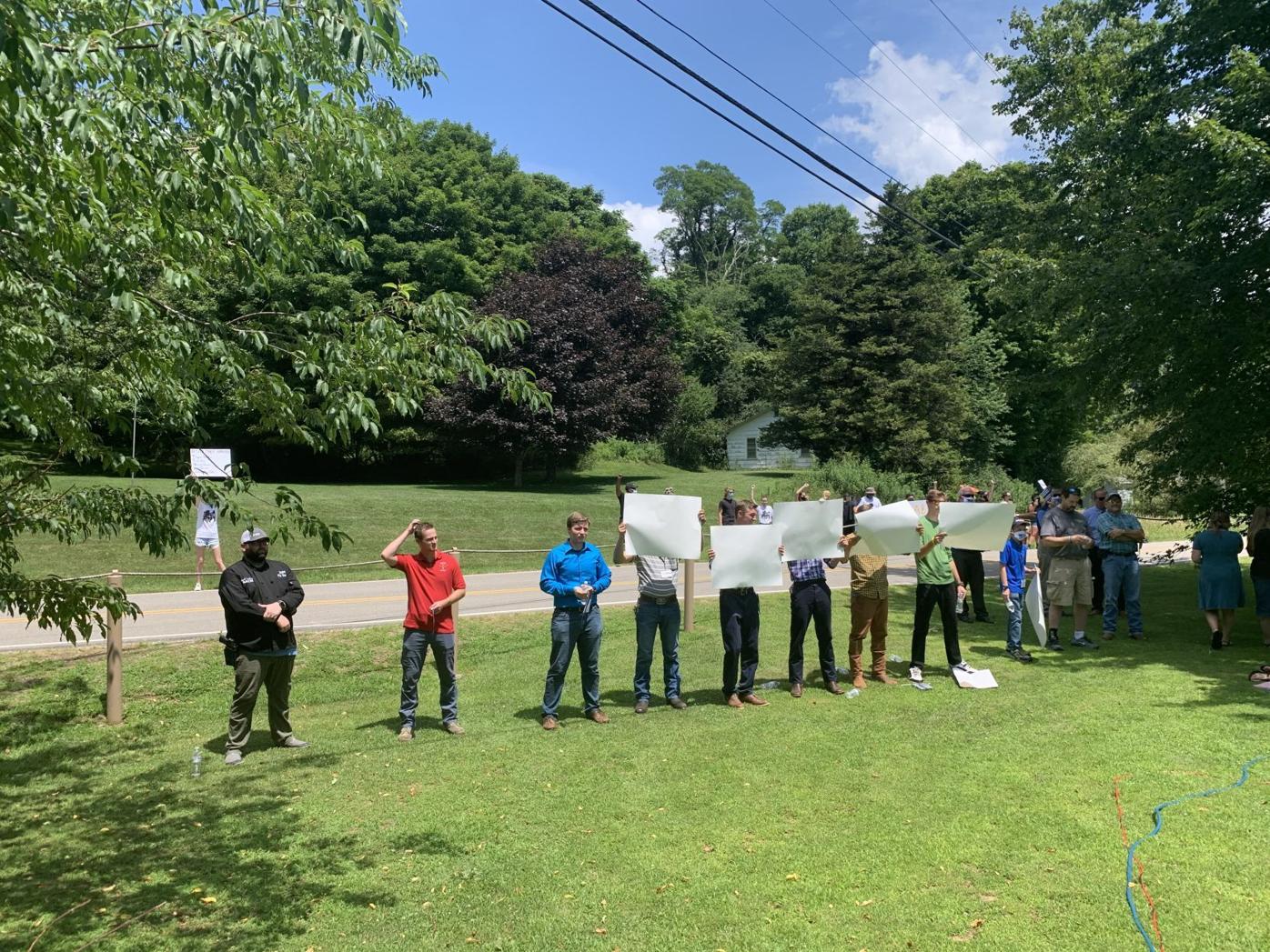 Rally attendees and members of the security team hold blank pieces of paper over their heads to block out protesters. 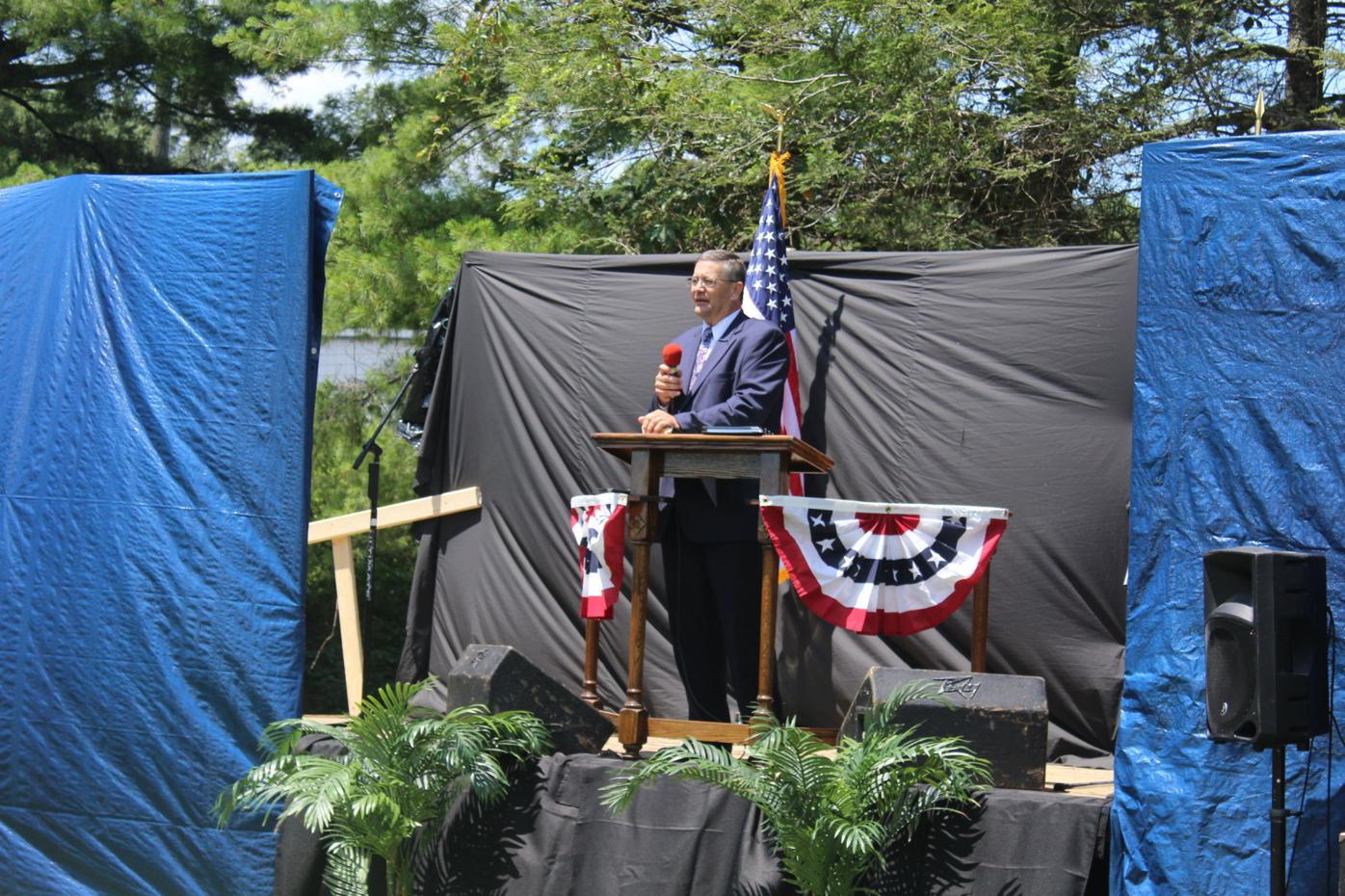 Pastor Michael Greene of Bibleway Baptist Church welcomes community members to the church’s lawn for the July 18 Back the Blue event. 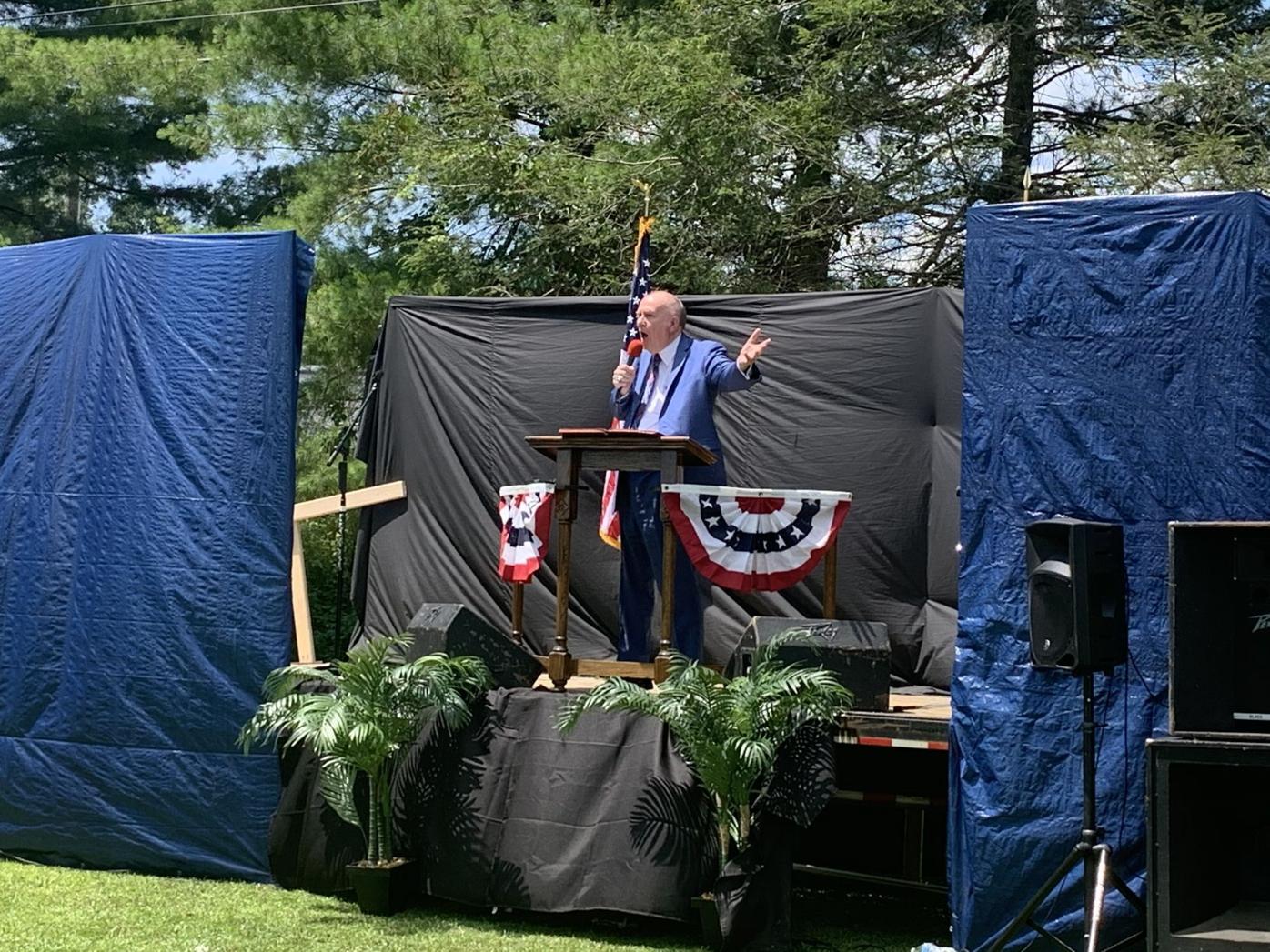 Ron Baity, chaplain for the Winston-Salem Sheriff’s Office, founder of Return America and pastor for more than 50 years, is the keynote speaker of the Back the Blue rally in Boone on July 18. 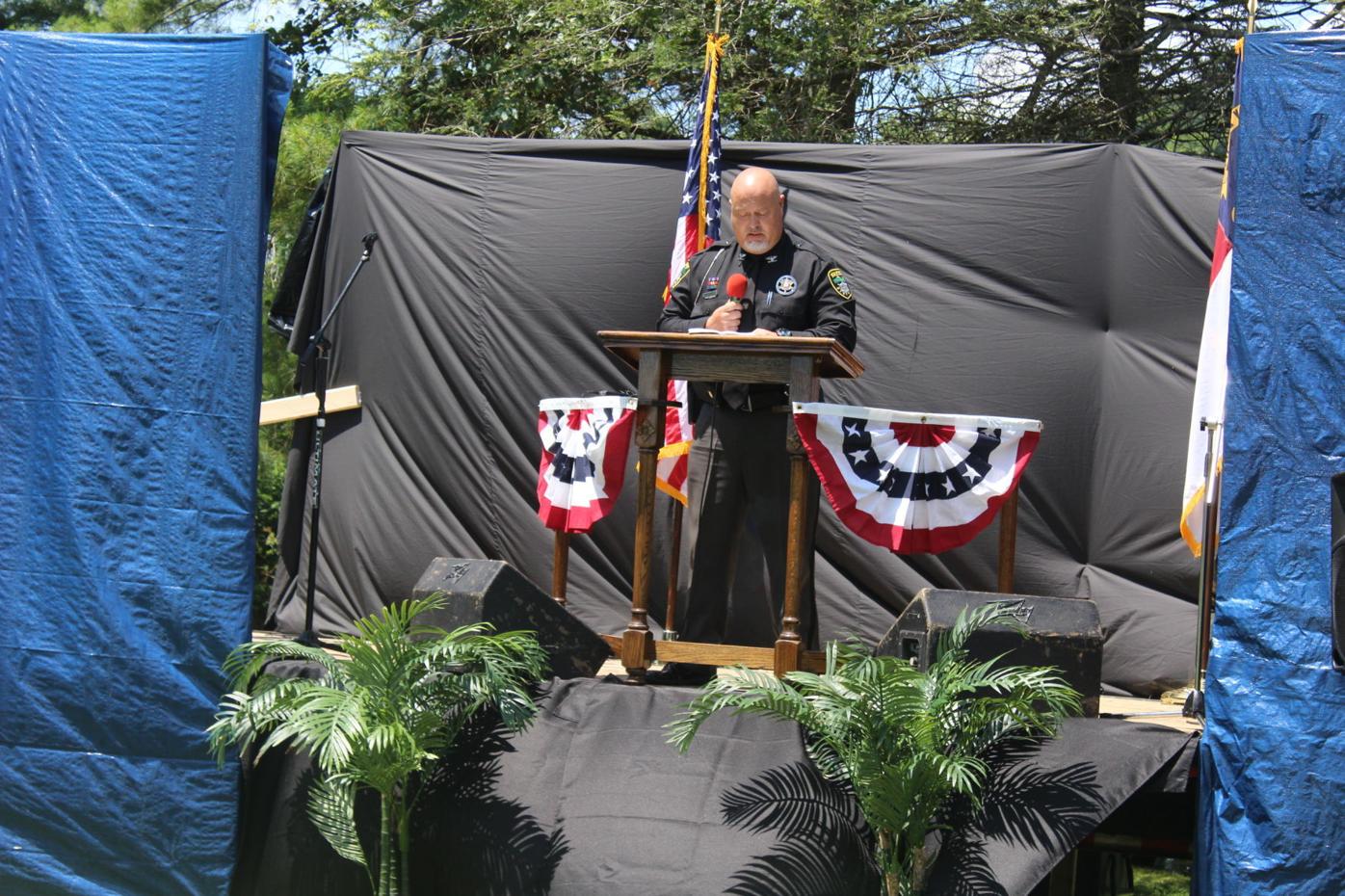 Avery County Sheriff’s Office Chief Deputy Lee Buchanan speaks at the Back the Blue rally in Boone on July 18.

BOONE — The lawn of Bibleway Baptist Church in Boone filled with several hundred people on July 18 for a Back the Blue rally to show love, support and prayer for the area’s law enforcement.

While a few dozen attendees indicated they were law enforcement or retired law enforcement and military, the majority of the crowd was made up of family members of law enforcement, including the families of officers who have been killed in the line of duty, such as Watauga County Sheriff’s Office Deputy William Mast Jr., who died in 2012.

Michael Greene, pastor of Bibleway Baptist Church, opened the rally by saying, “We’re not here to flatter them, we’re here to back them.”

“We’re here to show our support… I was thinking about the fact that our nation is a civilized nation because it’s built on laws, but a law is only as strong as those that enforce them. I’m grateful for those who are willing to put on the uniform each and every day to keep us safe. We do believe it to be a Biblical calling.”

“When God began to burden my heart over this, I began to realize that there’s some strange narratives going around in our day,” Greene said. “In fact, it defies even common sense. ‘Defund police’? Do away with police? I mean, how ignorant … Who’s going to come? Who’s going to show up when you call 9-1-1?”

A small group of protesters arrived on the other side of the road at the beginning of the event, most holding signs stating “Black Lives Matter” and “Defund the Police.” No protesters crossed the road onto Bibleway Baptist Church property. A security team, made up of mostly men who are retired law enforcement and teenagers who assisted with parking, stood on the Bibleway Baptist Church lawn and held blank paper over their heads to block out the protesters.

“Are we going to give our nation to the rapists? To the murderers? To child abductors? To the kidnappers? To the drug dealers?” Greene said to the crowd, who responded with a “no” to each question.

“These men and women get up each and every day and put on a uniform so that we might live with protection and have the peace and civility in our nation that no other nation on earth gets to enjoy,” said Greene. “There’s not a vocation on earth that doesn’t have its bad apples. The ministry, media, even law enforcement, the medical field — but we civilized, sensible people do not gauge a bucket of great apples over one or two bad ones.”

Protesters responded in various ways throughout the event, especially during lulls and pauses from the speakers, often questioning claims and statements made on the stage. Several vehicles drove by during the rally, some honking for an extended amount of time and some passing with American and Thin Blue Line flags displayed behind their vehicles.

Avery County Sheriff’s Office Deputy Sheriff Lee Buchanan was introduced by Andrew Greene, who said that Buchanan was awarded the Medal of Valor from President Donald Trump for a heroic action in June 2016 in Tennessee, when he and another officer pulled a motorist from a burning vehicle.

“The difference? Buchanan was off duty, out of uniform. How many know that our law enforcement officers, no matter when they clock out, go home and lay the badge aside, they’re never truly off duty. He, like so many others, responded to the call of duty, and rescued this motorist, saving their life,” Andrew Greene said.

Buchanan said that his speech was more for “the group across the road” than it was for the people on the lawn.

Arielle Chambers, national assistant director of BLEXIT, a co-sponsor of the event, explained the importance of using conservative values to repair conflict, which earned applause from the crowd.

“I want you to all see that we have a culture problem. I’ll go one step further: It is a sin problem. This is not about white and Black, this is about there is a problem with conservatives and liberals in this country not doing enough for people,” said Chambers. “This is not a white issue here. This is not a Black issue here. There is a problem with crime,” she said. “Clearly there is an issue when more Black people are killed in our inner cities by other Blacks than any other demographic group in the entire country. I have a problem with that. I love my people, and I want what’s best for them. I love the color of my skin, and I’m tired of people looking at me and saying I’m racist … because I believe that Black people shouldn’t be killing other Black people.”

Baity also recalled a particular instance when he had to deliver the news of an officer’s injury to the officer’s family in the middle of the night.

“Without this group of people, it wouldn’t be safe for your wife or your daughter to leave the house and go down the street. When evil men are trying to break into your house at midnight, you don’t pick up the phone and call the psychologist … You call someone with a badge on their chest, and they’re coming in the name of the law because they’re the only ones qualified and put in place by God to be able to do so,” Baity said.

A number of other pastors from across the region, including from Avery County, Butler, Tenn., and Zionville, prayed for law enforcement and the state of the country before the rally’s close.

Dawn Trivette, a Boone resident and one of the protesters, said that she was there trying to bring awareness to what the “defund the police movement really entails.” Riot gear costs $500 per suit, Trivette said, and horses that are used in bigger cities cost thousands of dollars just to purchase.

“That’s funding that, if those things were funded less, could go to schools or health care,” she said.

Another protester, Samantha, said that she was “practicing her First Amendment right” and “using her voice as a veteran to take a stance on police violence.”

“Cops aren’t trained to do what they always need to do,” she said.

Why do you never even attempt to contribute anything of value on here? All you ever do is come on here and insult folks with whom you disagree. In all the time I've seen you on here you've never had single, even half-way, intelligent thing to say. You're just another belligerent troll. Get lost.