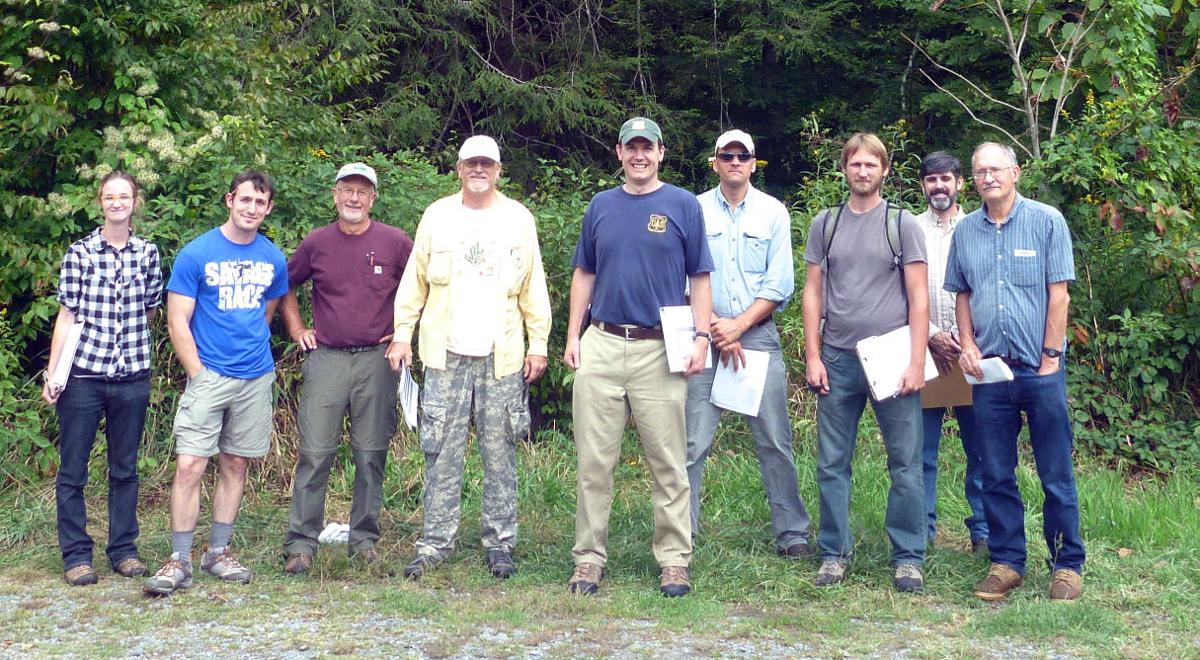 Hemlock woolly adelgid biologists stand in front of an Eastern Hemlock that was saved by introduced beetles during a workshop for biologists held at Lees-McRae College to solidify research protocol for monitoring hemlock health. 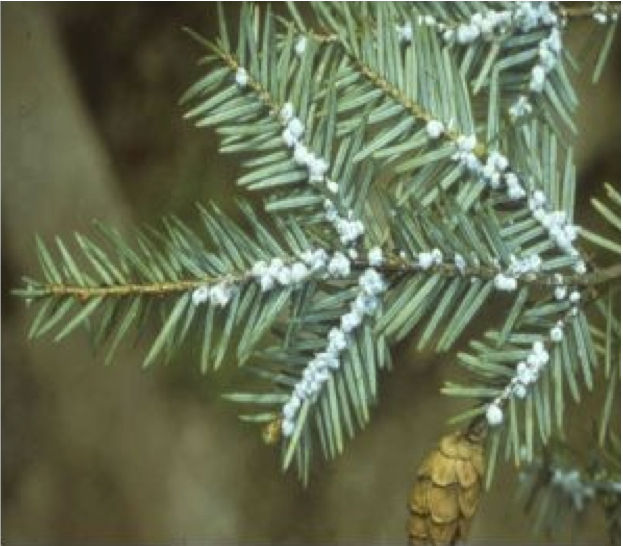 The hemlock woolly adelgid feeds at the base of hemlock needles. 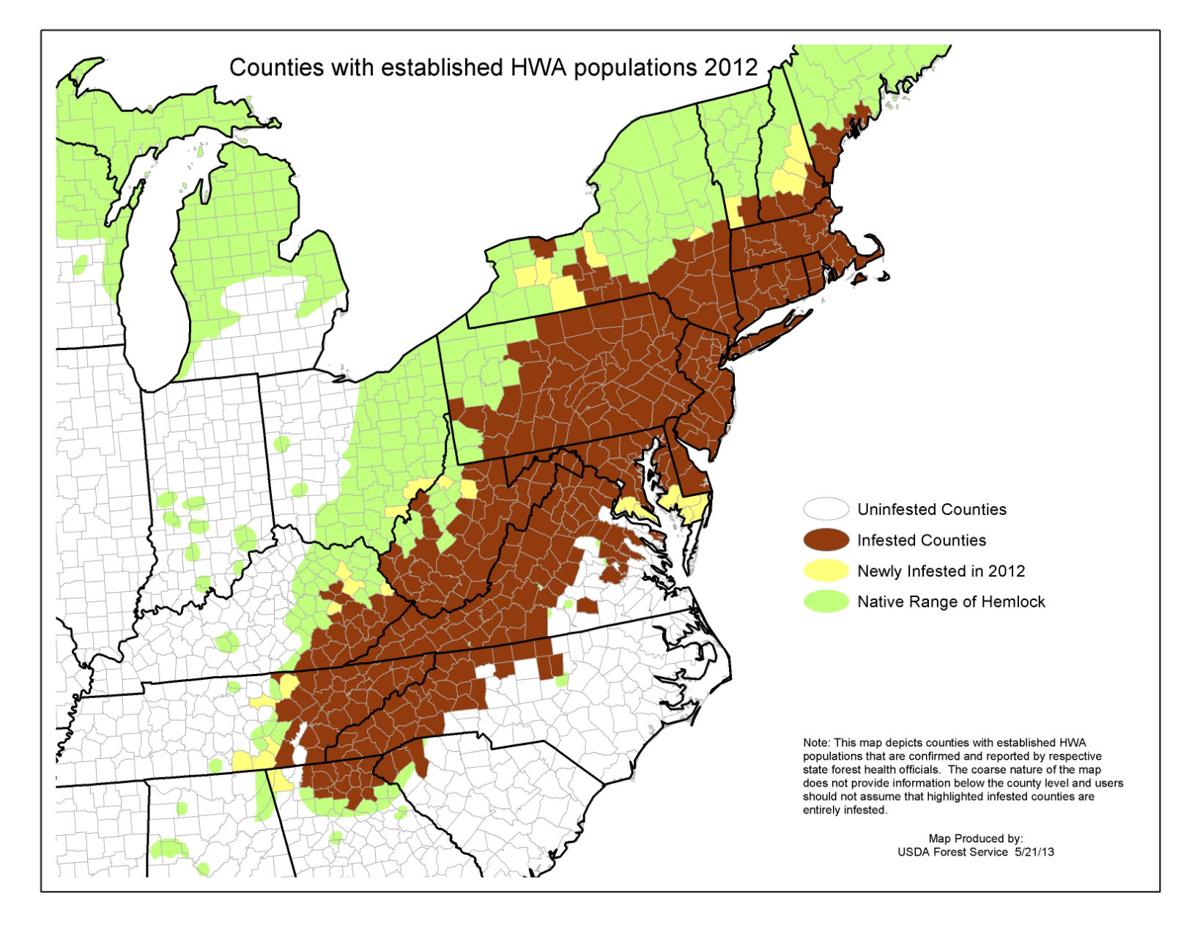 Hemlock woolly adelgid biologists stand in front of an Eastern Hemlock that was saved by introduced beetles during a workshop for biologists held at Lees-McRae College to solidify research protocol for monitoring hemlock health.

The hemlock woolly adelgid feeds at the base of hemlock needles.

Visitors to the Linville Gorge and other mountain forests have all witnessed the carnage. The gray ghosts of a once thriving hemlock population stipple the steep hillsides, falling victim one by one to the hemlock woolly adelgid.

Biologists, researchers, forest and wildlife advocates have been waging what may look like a losing battle against the invasive insect for more than a decade, but efforts are ongoing and recent successes are spawning renewed optimism.

A native of Asia, the hemlock woolly adelgid is a tiny, aphid-like insect that has decimated hemlock trees across Western North Carolina since it was discovered in the state in 1995, according to the N.C. Wildlife Resources Commission. The insect settles at the base of a needle and sucks out juices, causing bud mortality, twig dieback and defoliation. Under high infestation rates, the adelgid can cause tree death in as little as four to seven years, the WRC said.

“Hemlocks play an important ecological role in providing shade and temperature regulation for trout streams, songbird nesting and cover for a variety of wildlife,” said Joe Tomcho, WRC conservation technician, in a statement. “Hemlocks also are an important nursery and landscaping species and add to the diversity of trees seen from the many viewsheds across the mountains.”

But thanks in large part to the efforts of a Watauga County scientist — Richard McDonald of Sugar Grove — some stands of hemlocks are showing signs of recovery.

McDonald, of Symbiont Biological Pest Management, observed that hemlocks in the Pacific Northwest were not succumbing to the hemlock woolly adelgid because of the presence of a natural predator — the Laricobius nigrinus, or Lari beetle. He has spent the last decade studying the effects of Lari beetles on adelgids in several study plots across the High Country.

The Lari beetle controls adelgids well because it is a voracious predator that feeds exclusively on woolly adelgids, according to the WRC. Lari beetles are winter feeders and can eat up to six adelgids per day before laying 200 to 400 eggs in the adelgid egg sacs. Each larva can consume 200 to 250 adelgid eggs or crawlers before they pupate in June. Once established, Lari beetles can advance up to two miles per year.

Since the initial release of 300 lab-reared Lari beetles in 2003 on Hemlock Hill in Banner Elk, 10 generations of beetles have spread some 45 miles from the Lees-McRae College Elk Valley Reserve.

According to the WRC, McDonald is seeing good regrowth of adelgid-infested hemlocks at several of the earliest release sites. Since 2008, hemlocks have stopped dying in the 5,000-square mile release area around Grandfather Mountain.

“Even better, McDonald’s research is showing that the trees actually have been growing since 2008,” Tomcho said.

Last month, the WRC released 50 Lari beetles at the Sandy Mush Game Land north of Asheville as part of the Hemlock Restoration Initiative, a cooperative effort launched by the N.C. Dept. of Agriculture and Consumer Services in March 2014 to restore North Carolina’s hemlock trees to long-term health.

The goal of the initiative is to use three primary treatment and restoration methods to control the woolly adelgid: chemical treatment to stabilize the trees; predator beetle releases for long-term adelgid control; and a search for trees that are either naturally resistant to the impacts of the adelgid or can tolerate mild infestations so they can survive to maturity.

Funding of last month’s beetle release came from a $75,000 grant to WNC Communities, an Asheville-based nonprofit selected by the N.C. Dept. of Agriculture and Consumer Services as its primary partner for the Hemlock Restoration Initiative.

McDonald has been working with the council, based in Bakersville, to educate the public about predator beetle programs, including proper collection and release techniques.

“It is vitally important that we do all that we can to protect this precious hemlock ecosystem,” McDonald said in the WRC press release. “We need to get the word out about the program, and get people trained correctly on the proper collection and release techniques and begin making strategic releases.”