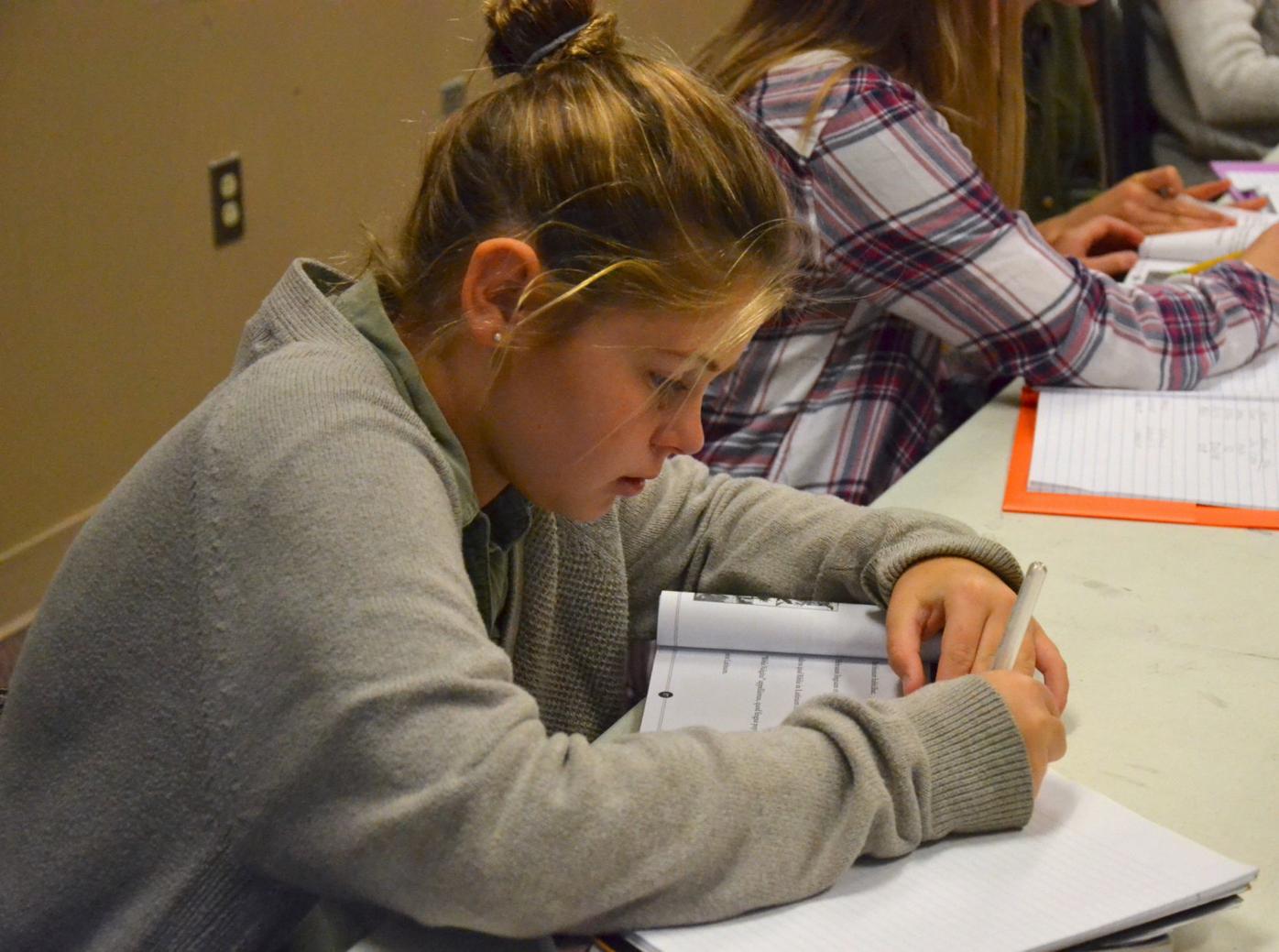 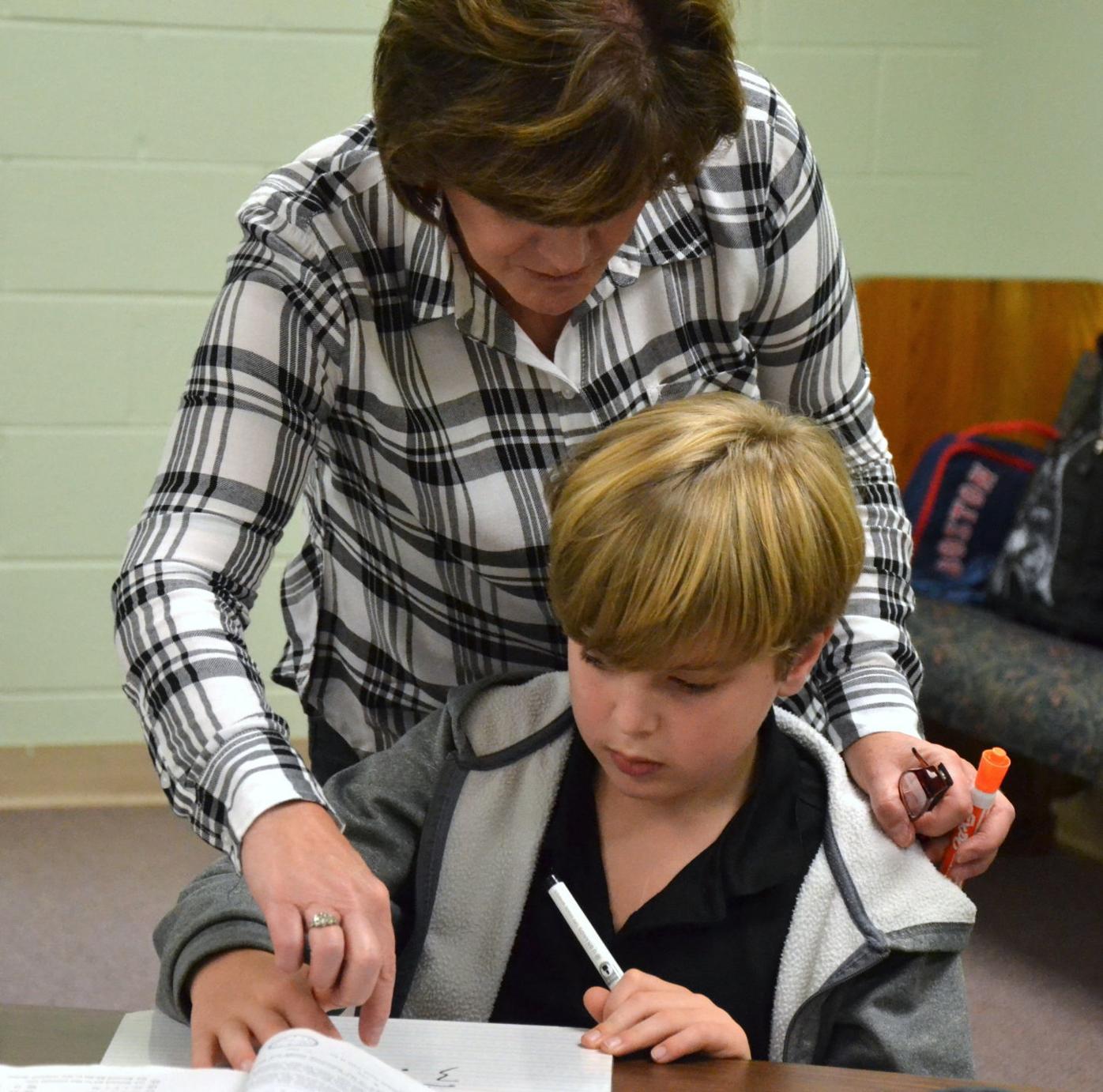 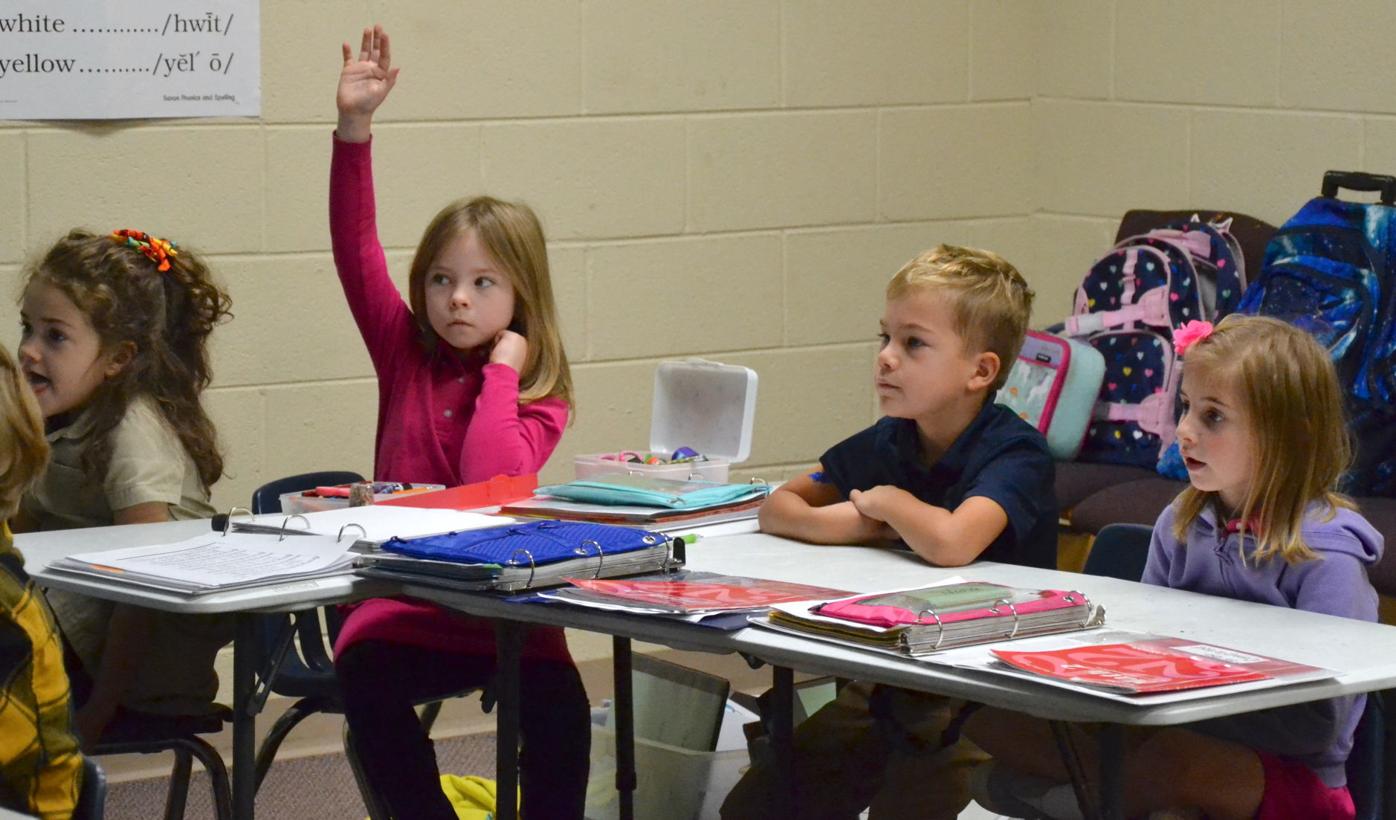 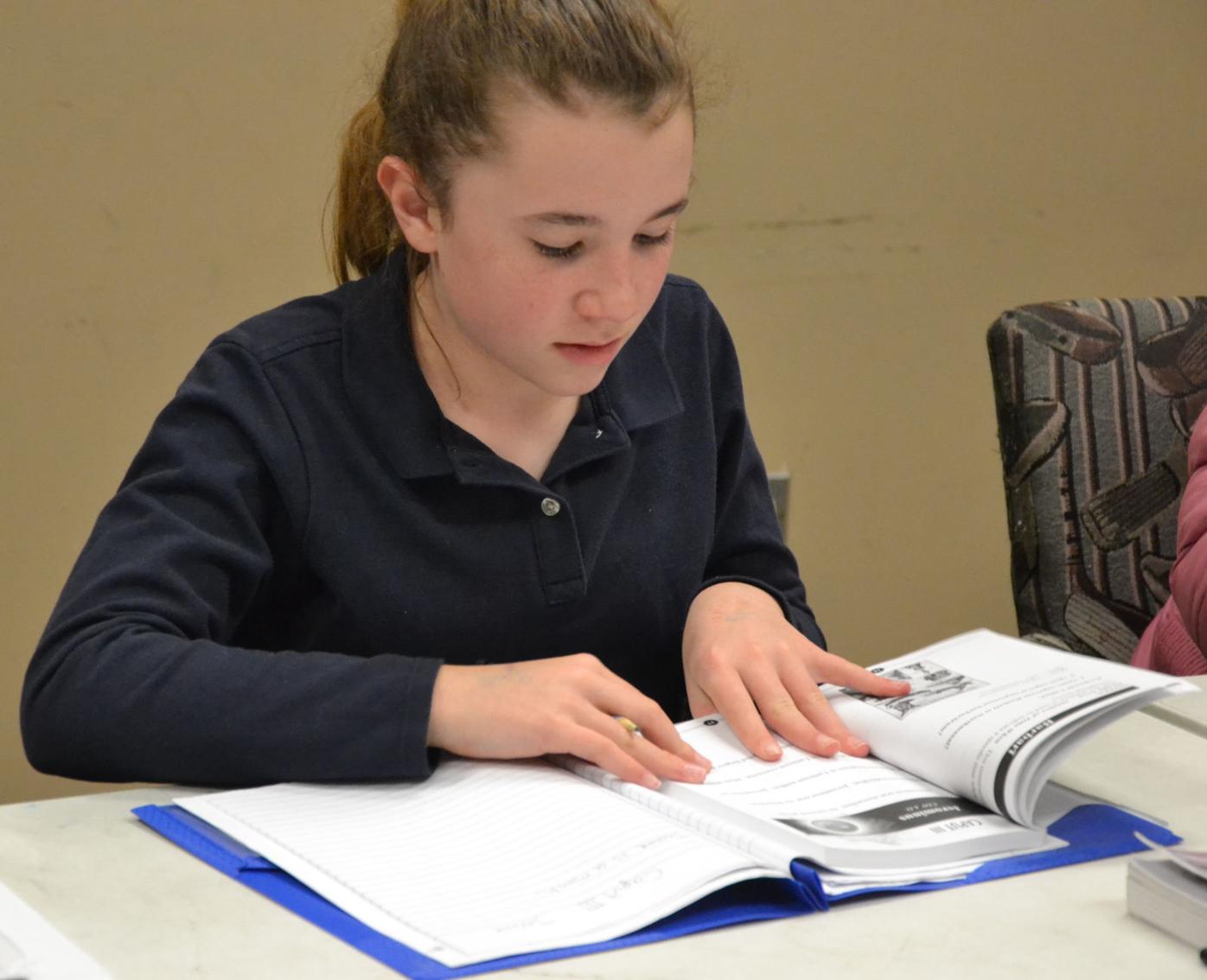 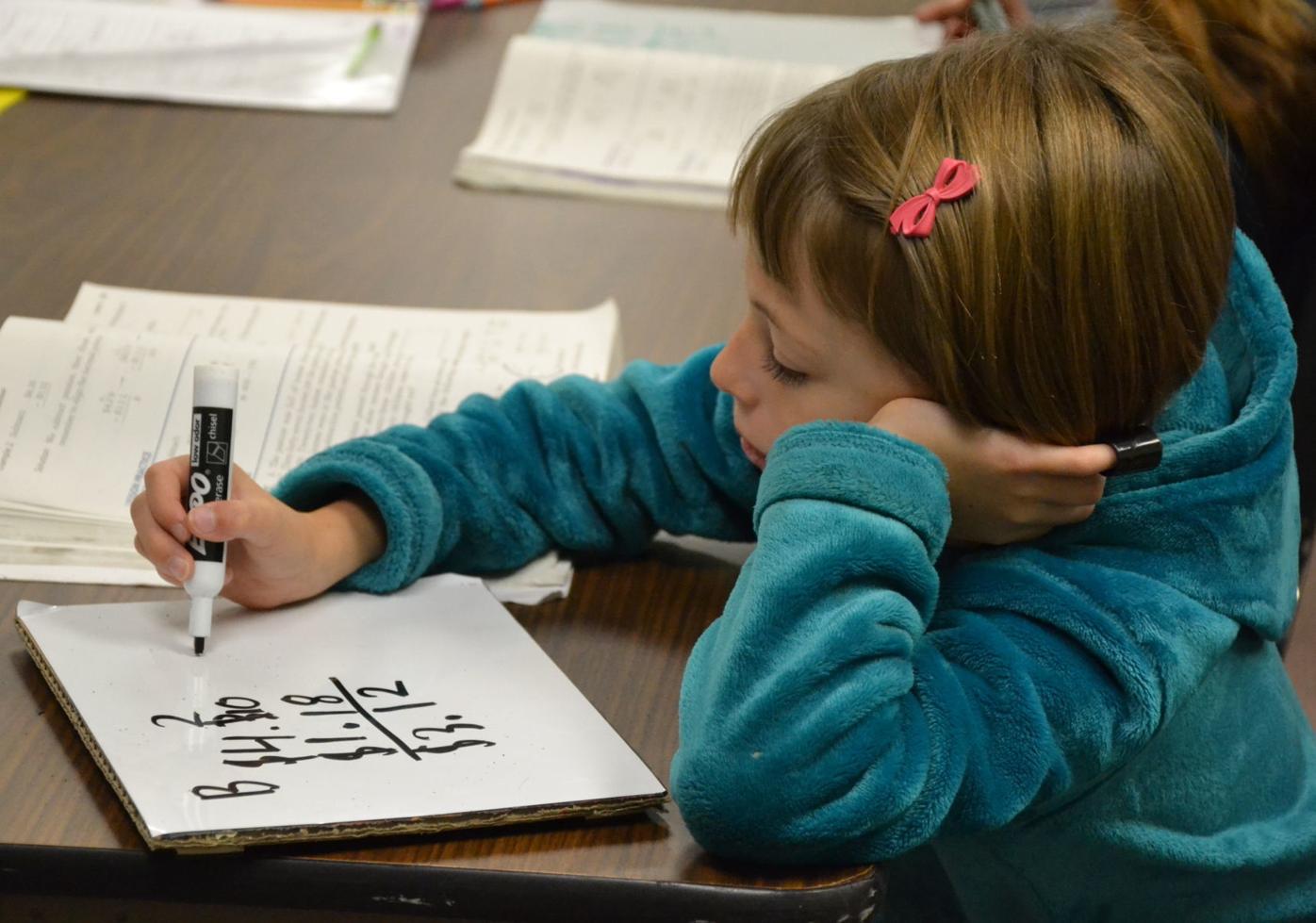 Wendy Prewitt, a student at Grace Academy, works to solve a math problem. 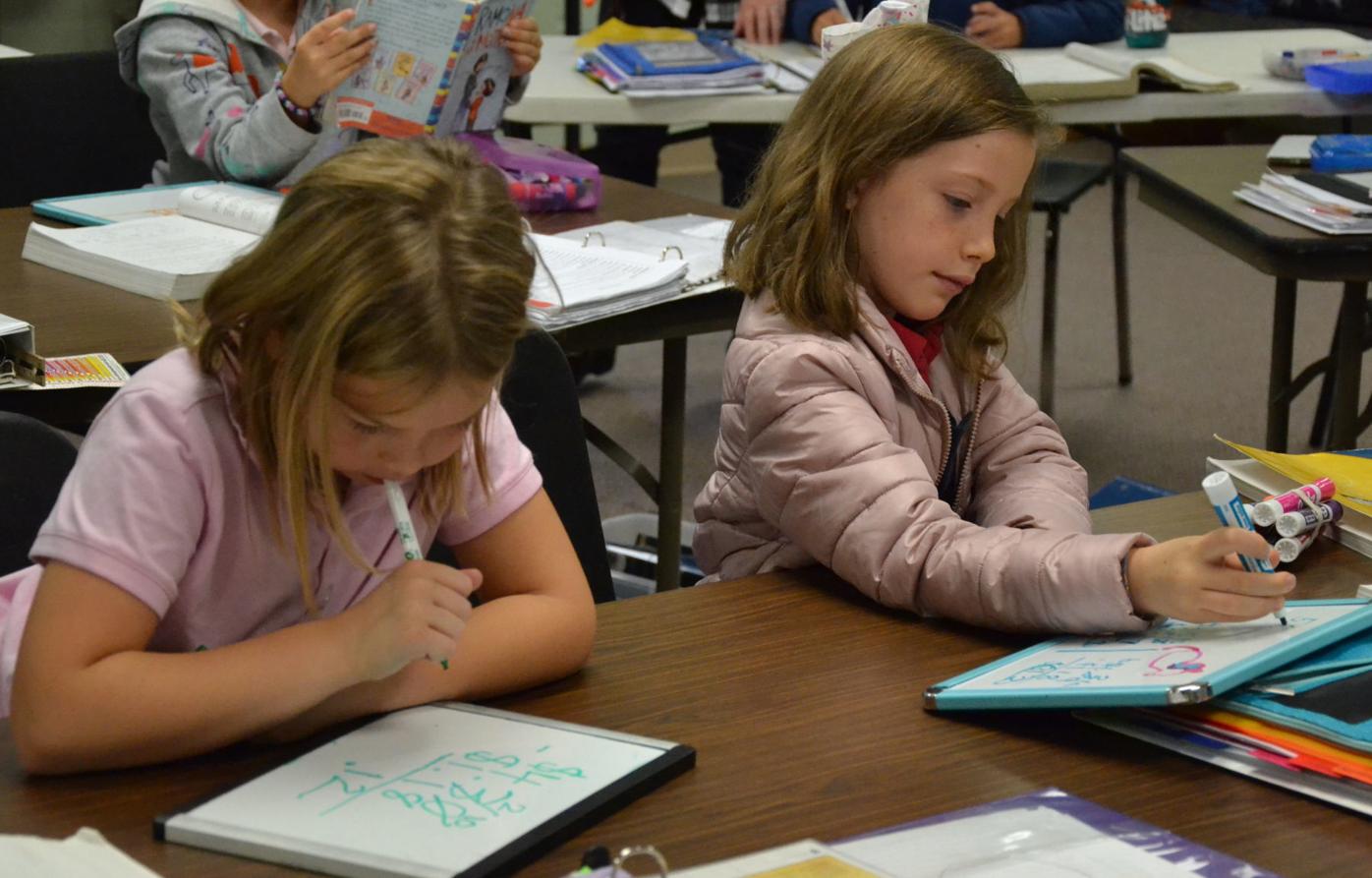 Wendy Prewitt, a student at Grace Academy, works to solve a math problem.

BOONE — Grace Academy, Boone’s only Christian school, is looking to become accredited, expand into high school grades and obtain its own physical building in the coming years.

These are the goals that the board of Grace Academy had when it hired Roy Andrews as headmaster a year and a half ago, and have been discussed by the board for many years, according to Board Chair Jason Kimak.

In its 12th year, Grace Academy is a Christian classical school that is based on the campus of the Boone United Methodist Church. The school currently serves about 115 students in grades K-8 with 18 faculty and staff members, Andrews said. Students meet with teachers on Monday and Wednesday to go over curriculum and do school work either at the school or at home on Tuesday, Thursday and Friday.

Andrews is the first headmaster the school has hired full time, as before then it was a part-time position filled by volunteers or teachers. To meet the needs of the growing school, the board wanted to invest in administrative leadership that could also conduct fundraising and vision-casting efforts, Andrews said.

While each of the three goals will be years in the making, the work behind each of them has begun.

During the summer, Grace Academy joined the Association of Christian Schools International. ACSI is an accreditation body that can provide resources to Grace Academy once an accreditation has been achieved. In order to accomplish this goal, Grace Academy must first enter into a self study phase, and record what it is doing in terms of curriculum, finances, safety standards and programs. The self-evaluation process can take one to two years, Andrews said.

The second phase of the accreditation process is a site visit by ACSI staff that would give the school a basis for an action plan of what it needs to do to achieve accreditation, a process that could take another few years. Grace Academy would then respond with a written report explaining how it would comply with the ACSI recommendations, to which ACSI would then make a decision.

The accreditation could provide Grace Academy with additional resources such as training or legal aid. Kimak said the goal of accreditation is to further validate the educational experience that students receive at Grace Academy.

“If we get more credibility or more notoriety in the community, it creates opportunity to get more student enrollment,” Andrews said. “It’s very easy for me to see us doubling our population in five years if we just worked at it a little bit.”

Andrews added that the lack of accreditation doesn’t mean the school isn’t credible, but the accreditation would keep Grace Academy from drifting into complacency or overlooking gaps.

The school operates on a classical model, in which instructors teach subjects such as Latin and consider the development of a child in three stages, according to Andrews. The first is the grammar stage (for grades K-5), and it is devoted to the learning of fundamental facts and rules of each subject. The second is the dialectic stage (grades 6-8), which teaches students how to analyze, reason, question, evaluate and critique. The third is the rhetoric stage (grades 9-12) which gets into more debate, speech and essay writing.

In order to expand into high school grades, Andrews said the school is focusing on strengthening its middle school program. The school has done so by changing the middle school culture for students to give them new opportunities. Middle school students in the past would stay in one classroom as teachers rotated through. To provide the students more responsibilities, grades 6-8 are now given lockers, rotate classrooms while the teacher is stationary and are given service-learning opportunities in the community.

Grace Academy is also trying to expand its extracurricular activities offered to middle schoolers. The school has a cross country team that participates with the Tailwind Track Club and in years past have had a Student Council. Starting in January, the school hopes to offer a club that would provide information on manners and Godly-character, Andrews said.

Andrews said there has been talk of potentially creating basketball, volleyball or swimming teams in the future. If the school were to acquire its own space, Andrews said there’s a potential to have a school band as well.

Once it has created a sturdy foundation in its middle school, Andrews said Grace Academy could start by adding a freshman class. The school would likely add on one grade level — sophomore, junior and senior — each year over the course of four years.

Andrews and Kimak both expressed gratitude towards BUMC for allowing the school to be hosted on at the church. However, Andrews said Grace Academy is at the point where it can’t continue its growth as well as there are some activities the school can’t pursue in the space.

Andrews said Grace Academy could potentially find property to build a new facility — a vision he sees for the school — or moving into existing infrastructure. The school could either move all of its operations into a different building, or operate out of BUMC as well as a separate building, he said.

“Our own space could happen in the next couple years while we’re doing accreditation and adding a high school,” Andrews said.

In the near future, Andrews will be meeting with donors and applying for grants to try to get these goals off of the ground. He said it likely will take funding from multiple avenues — private and public — to reach these accomplish the school’s mission.

The school does require tuition from participating families. Tuition for elementary school is $3,000 while Middle school is close to $4,000 for the full school year, according to Brittnee Sutherland, Grace Academy’s enrollment and financial manager.

Sutherland is also a Grace Academy parent of a first-grader. She said she chose the school because it allowed her to work with her student independently at home while the school provides rigorous curriculum. Andrews added that the school believes when the home, church and school can have a consistent message, it provides stability for children.

“The board has a vision for the children of Grace Academy to grow both spiritually and academically,” Kimak said. “Our future decisions will be to best support the deepening of our students commitment to the gospel and discipleship all while providing an excellent education.”