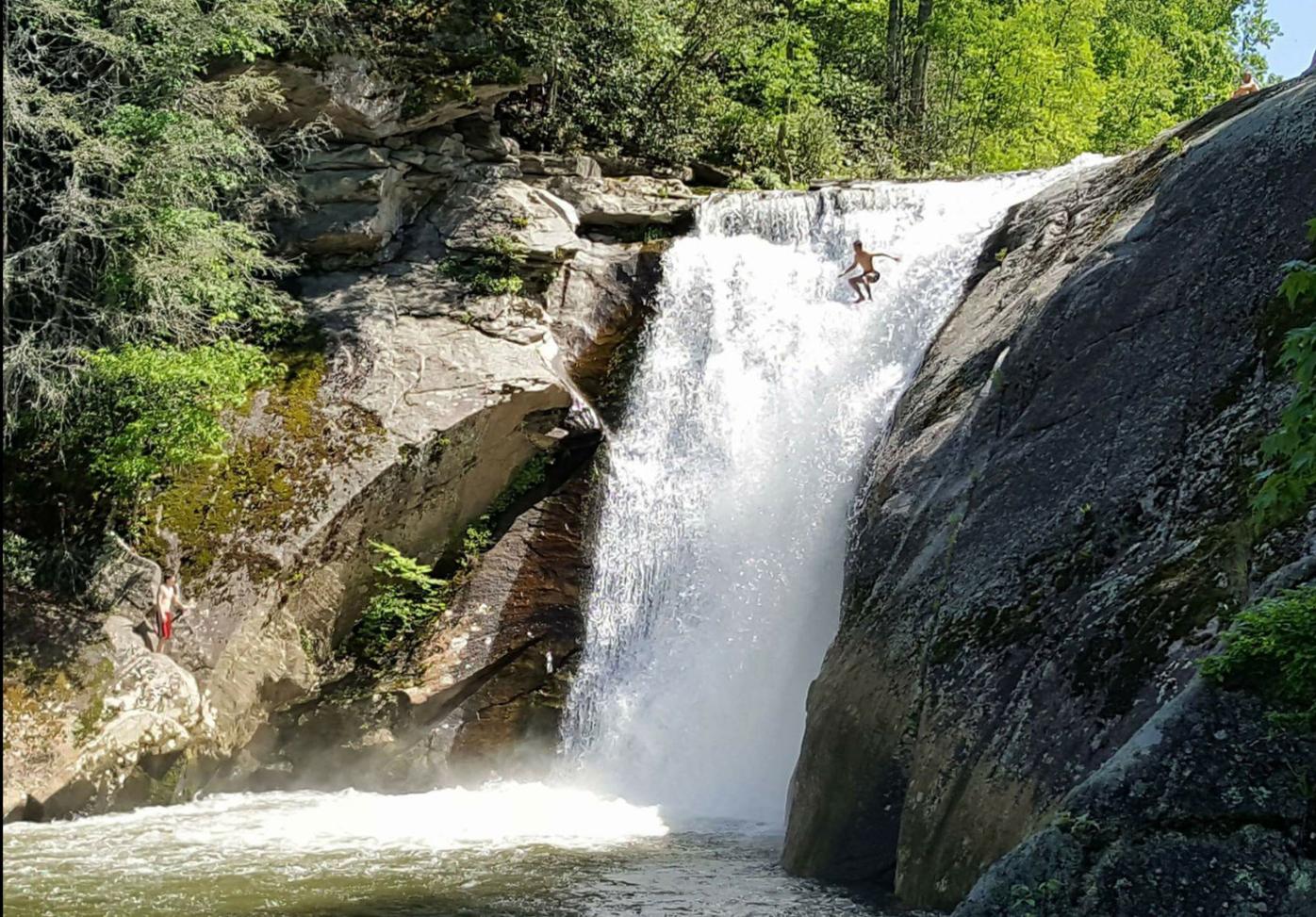 A jumper leaps from the top of Elk River Falls in this photo taken earlier this summer. While the person pictured emerged from the bottom of the falls unharmed, Alexandria, Va., native and professional cliff jumper Alex Vocature became the latest to suffer a serious injury at the falls on the afternoon of Saturday, Sept. 23. 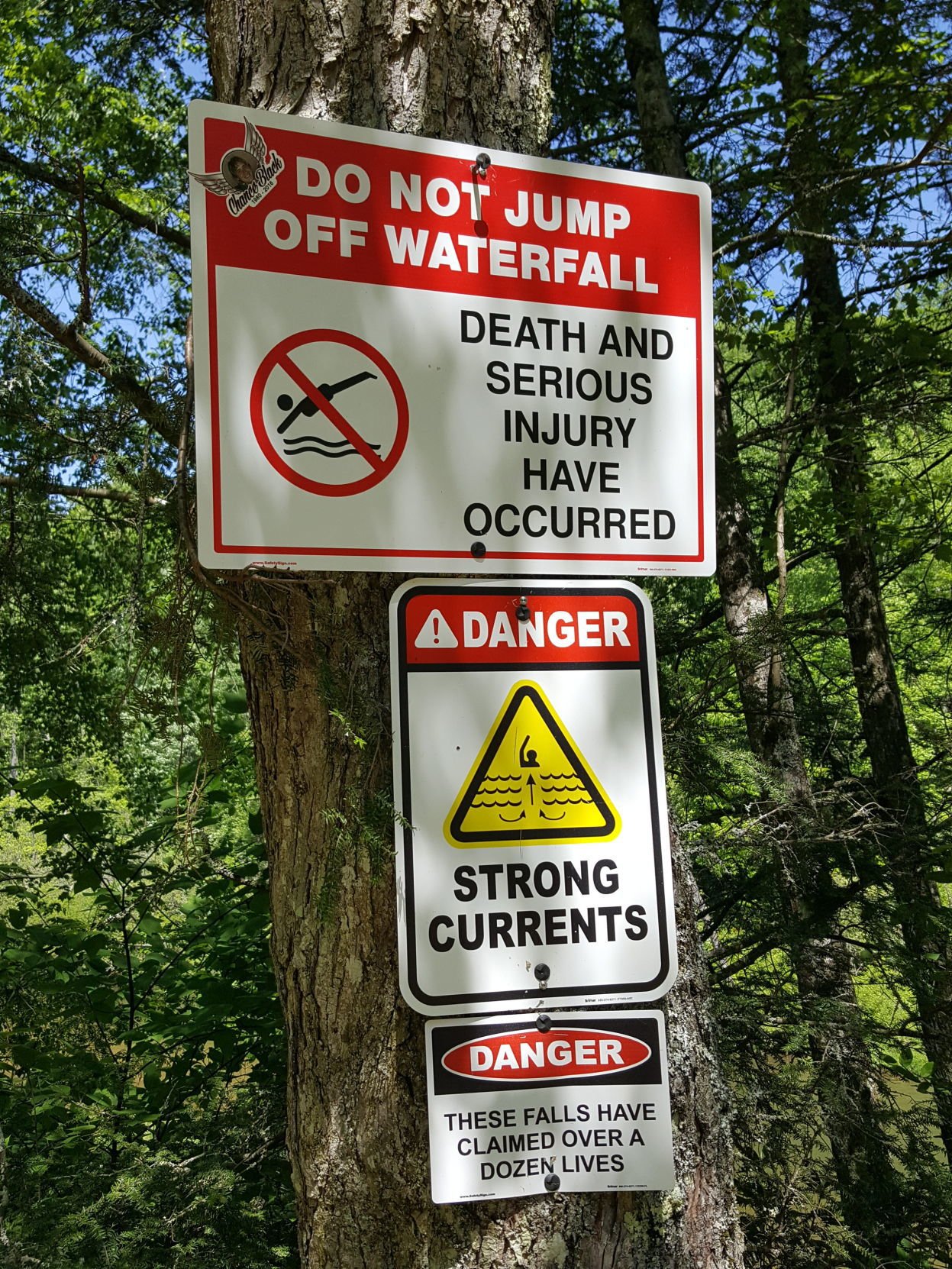 Signs purchased and installed by local individuals such as Rob Farber, Twana Blair and Blue Blair have warned visitors against jumping from Elk River Falls since late last summer. While these signs have served as a deterrent, some of them have been vandalized and covered with graffiti.

A jumper leaps from the top of Elk River Falls in this photo taken earlier this summer. While the person pictured emerged from the bottom of the falls unharmed, Alexandria, Va., native and professional cliff jumper Alex Vocature became the latest to suffer a serious injury at the falls on the afternoon of Saturday, Sept. 23.

Signs purchased and installed by local individuals such as Rob Farber, Twana Blair and Blue Blair have warned visitors against jumping from Elk River Falls since late last summer. While these signs have served as a deterrent, some of them have been vandalized and covered with graffiti.

ELK PARK — It’s a tragic story that’s been told far too many times in Avery County. A visitor to Elk River Falls arrives for a day of fun and swimming at one of the area’s most majestic waterfalls, and leaves in an ambulance, a helicopter or, worse yet, a body bag.

For the latest casualty of the waterfall, it was the former.

Shortly after 1 p.m. on Saturday, Sept. 23, emergency services responded to a report of an injury at Elk River Falls. According to Elk Park Volunteer Fire Chief Mike Ellenburg, a young man had to be carried out from the bottom of the falls after jumping and suffering severe pain in his back and lower extremities. Avery EMS Director Jerry Turbyfill confirmed the patient’s identity as Alex Vocature, and said that the young man gave an address in Alexandria, Va.

After the incident, Vocature spoke to Watauga Democrat‘s sister newspaper, the Avery Journal-Times, and shared what attracted him to the falls.

“I’m a sponsored cliff jumper and have been all over the country cliff jumping,” Vocature said in a conversation via Facebook. “I was scouting this place for the first time, and I jumped three times. The first two were good, but the third one I missed the landing zone and hit a big rock just below the surface.”

As Vocature was being carried out from the bottom of the falls, Ellenburg said emergency personnel established a landing zone at a predetermined location on Elk River Road. Vocature was airlifted to Johnson City Medical Center by PHI Air Medical, where he was released on Sept. 25.

“I am so blessed compared to what could have happened,” Vocature said.

For Vocature, the ordeal at Elk River Falls ended with life and limb intact. For others who have not been so lucky, however, this has not been the case. While hundreds of people visit Elk River Falls without incident each year, there have been countless serious injuries and fatalities at the location.

“I would like this story to be read so that people don’t make the same mistake I did,” Vocature said. “Honestly I am not some first-time cliff jumper. I did all the safety protocols and still hit a hidden rock here at this falls. So people should be made more aware for this location.”

The last fatality to occur at the falls took place on July 16, 2016, when local resident, 39-year-old Jacques Downing, jumped from the top of the falls and didn’t resurface. It took dive teams from Charlotte and Washington County, Tenn., two days to recover his body from the hazardous waters beneath the waterfall.

In the days following Downing’s passing last summer, the question of how to start a conversation on Elk River Falls weighed heavily on local authorities and the U.S. Forest Service. The result, nearly a month later, was a public service announcement filmed at the falls and posted on YouTube.

Bringing together representatives from the USFS, Elk Park VFD, Linville Central, Avery Emergency Management and the ACSO, the video shares some of the dangers of jumping from the falls, as well as experiences of the emergency workers who have to pick up the pieces when something goes wrong.

Since being uploaded to YouTube on Aug. 30, 2016, the video has been viewed 830 times. By comparison, there are dozens of videos on the site that show individuals jumping off of the falls with no consequence, many of which have been viewed thousands of times.

For Interim Appalachian District Ranger Tim Slone, meaningful change at the site can only come through cooperation with local people and authorities. While Slone commented on the awesome beauty of the place, he also saw the need to shift the public perception of the falls.

“I think there has to be a broad group of people who are saying the same thing and pulling the rope in the same direction and making it culturally uncool to do it,” Slone said.

Prior to Downing’s death, many tourism websites had little to no information about the waterfall’s danger. In the time since, sites such as www.romanticasheville.com and www.ncwaterfalls.com have updated their pages to reflect the dangers inherent at the falls.

The state tourism website, www.visitnc.com, has yet to make any changes to the listing for Elk River Falls.

When Rob Farber lived on Elk River Road, going to Elk River Falls was a daily ritual. A professional lifeguard and competitive swimmer, Farber, who now lives in Foscoe, makes use of the plunge basin at the bottom of the falls as a workout area, swimming against the river’s powerful currents. While Farber visits the falls both to exercise and enjoy the tranquility of the area, he has also witnessed six serious accidents at the location.

“You sit there and you watch people jump, and there’s the fun and excitement and smiles on people’s faces, and that’s a good day,” Farber said. “But the next day you go and you have to swim out for a girl who landed on her side and has a broken rib and possibly collapsed lung. There’s nobody else there, so I took it on myself, when I’m going five days a week, to lifeguard and bring a first-aid kit. They’re just going to sit there and film it and smile, and then their friend doesn’t come out of the water. That’s just a heartbreaking look on those people’s faces.”

On the day that Downing died, Farber was there. After that incident, Farber, along with other locals such as Twana Blair and Blue Blair, chipped in to purchase and put up new signs at the top of the falls warning about its dangers. Visitors are now greeted by signs with very clear messages, such as “Do not jump off waterfall: death and serious injury have occurred,” and “Danger: These falls have claimed over a dozen lives.”

“It’s a tangible thing,” Farber said. “That was the only thing I could think of that would maybe deter people. I know people will continue to jump and continue to see a natural challenge in front of them and want to take that. But there’s tons of places for that, and this is not the place.”

In the time since the signs were erected last year, they have been vandalized and painted with foul language. While these signs, and conversations with people like Farber, may have made some think twice, others continue jumping off the Falls with reckless abandon. Although every jumper must pass by the memorial cross erected in Downing’s memory, some still resolve to take their lives into their own hands.

For Ellenburg, who has worked countless accidents at the falls during his time with the ACSO and the Elk Park VFD, the USFS bears some responsibility for making a change at the site, perhaps including increased patrols during the peak season.

“The only way I could see that place changing by preventable measurements would be if the forest service hired somebody down there at the peak season through the summer months to kind of patrol and stay at that location,” Ellenburg said. “They patrol the area, but of course, they’re never there when people jump. There’s some places where they have gates and they kind of monitor what’s going on inside the park. That’s the only way I think they would ever be able to prevent that, is to have employees on hand.”

While everyone has an opinion on what should be done at Elk River Falls, from dynamiting the rock face to closing the area entirely, the solution on how to prevent deaths and serious injuries at the falls remains elusive.

I have seen several of the videos, but I don't believe I have ever seen the official one put together on its dangers. Do you have a link to it? Thanks so much