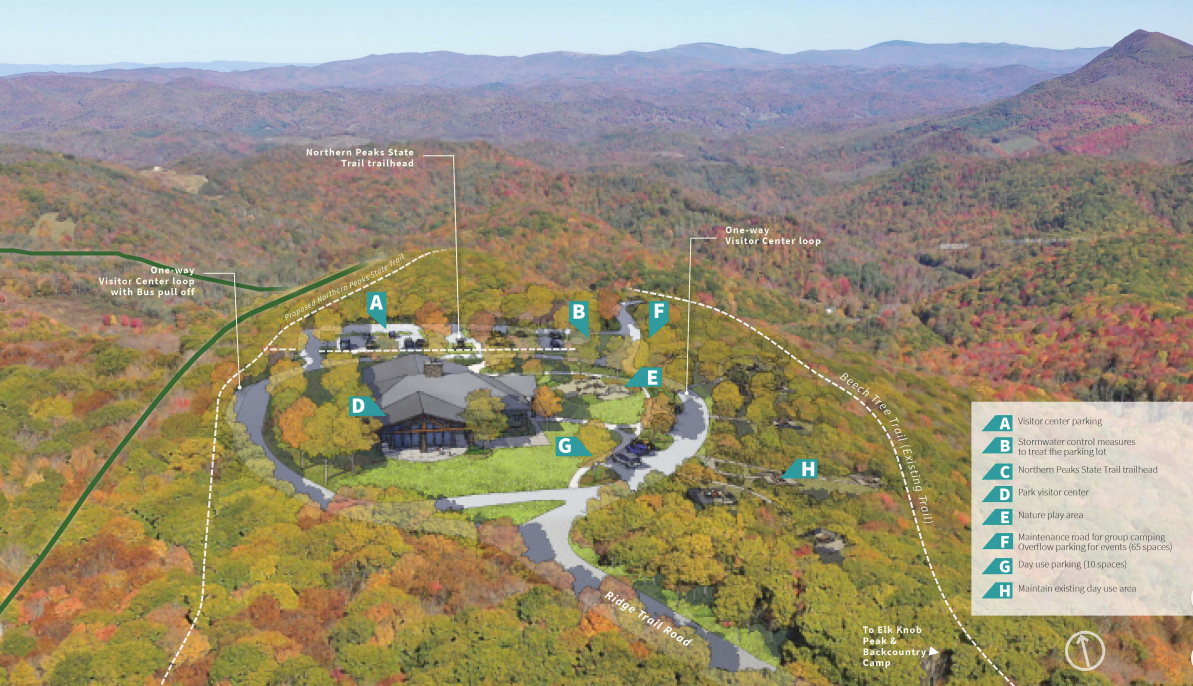 This rendering of the proposed visitors center for Elk Knob State Park shows the position of the visitor center to both existing and planned trails. 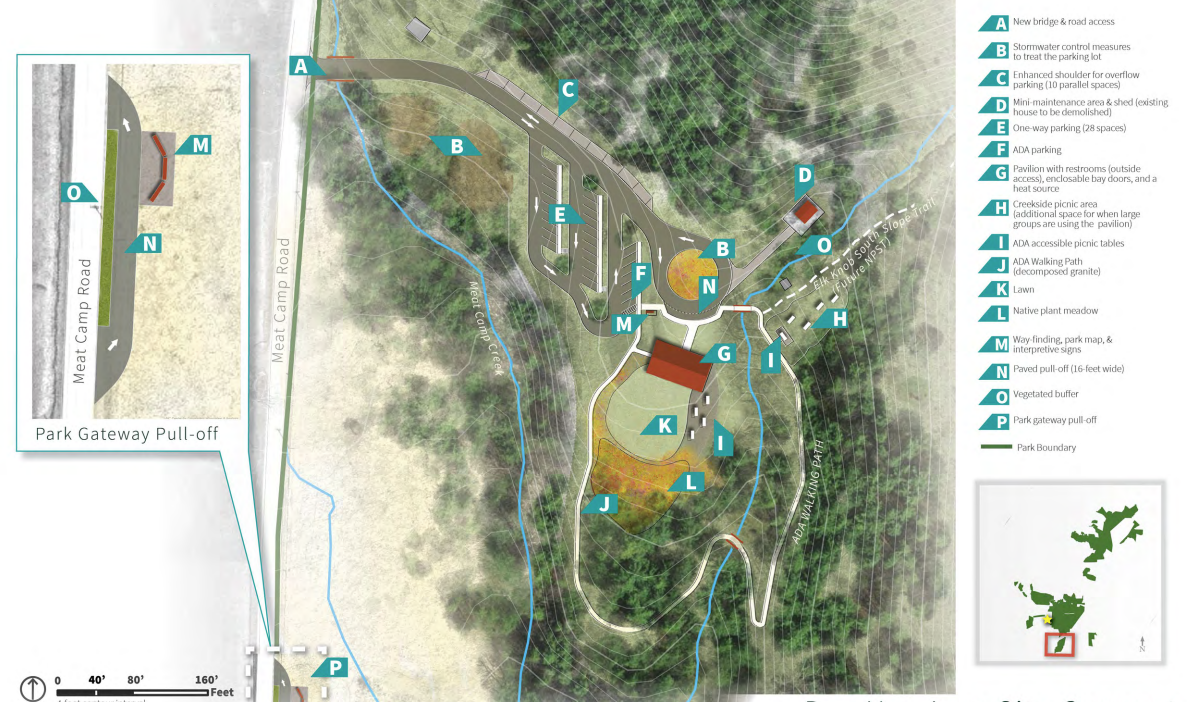 A day use area is proposed in the Elk Knob State Park, located southeast of the proposed visitors center site. This site is planned to include a parking area, a pavilion, an ADA-accessible trail and ADA-accessible picnic tables. 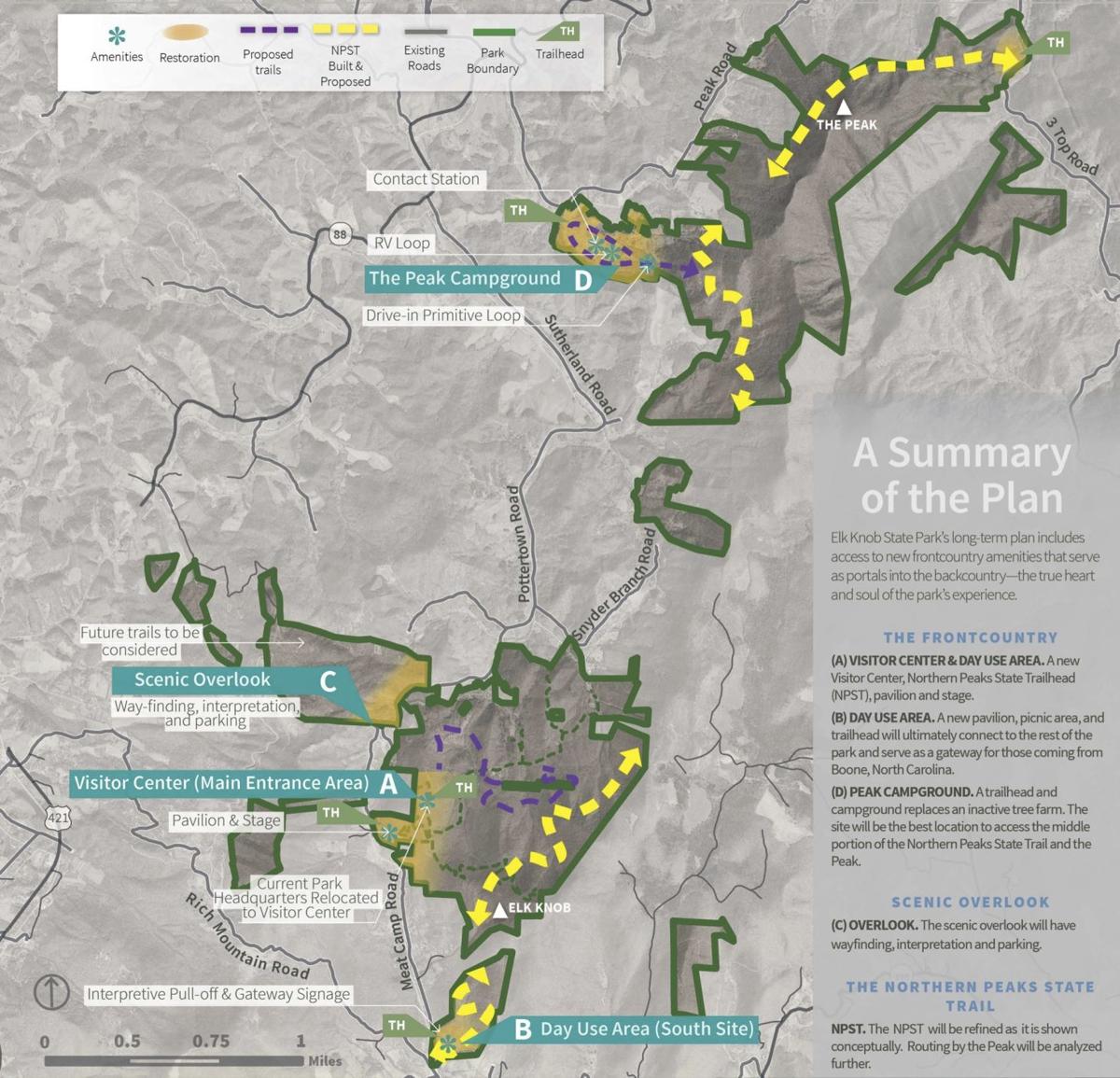 This map indicates proposed sites for amenity additions to Elk Knob State Park, including a day use area, campground at The Peak and a scenic overlook. 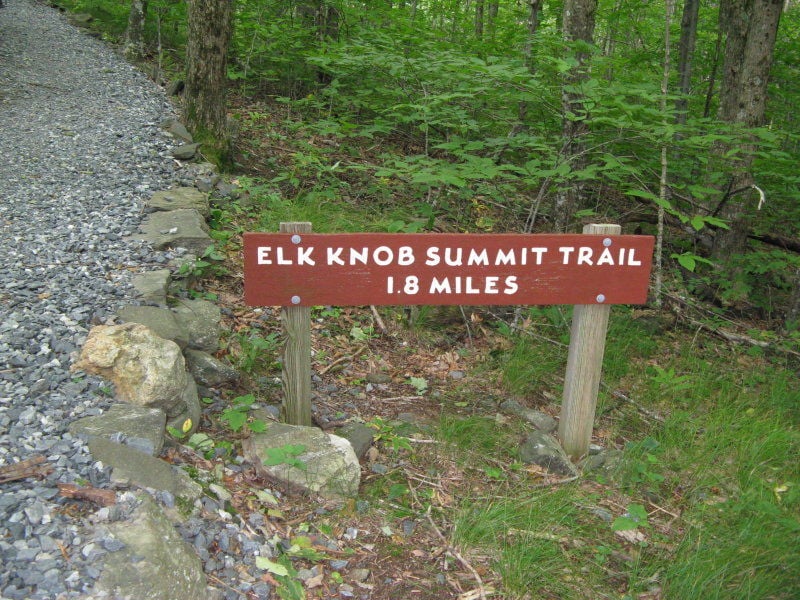 Summit Trail is one of the four trails offered at Elk Knob State Park.

This rendering of the proposed visitors center for Elk Knob State Park shows the position of the visitor center to both existing and planned trails.

A day use area is proposed in the Elk Knob State Park, located southeast of the proposed visitors center site. This site is planned to include a parking area, a pavilion, an ADA-accessible trail and ADA-accessible picnic tables.

This map indicates proposed sites for amenity additions to Elk Knob State Park, including a day use area, campground at The Peak and a scenic overlook.

Summit Trail is one of the four trails offered at Elk Knob State Park.

BOONE — On Tuesday, June 23, the North Carolina Division of Parks and Recreation released its final master plan for development at Elk Knob State Park after being in the planning process since July 2018, according to past Watauga Democrat reports, and the plan is open to public comment until July 10.

In the master plan, the executive summary detailing the park’s development states that “a major focus of the park is expansion and land acquisition to increase connectivity of the non-contiguous parcels, conservation of critical resources and to connect the (planned) Northern Peaks State Trail” to the park.

Located in both Watauga and Ashe counties, “the park is likely to implement one of the first sections of the planned 40-mile NPST that will connect the region,” the plan states.

Detailed in the plan are the proposed attractions to establish Elk Knob State Park’s recreational facilities and trails, which include two pavilions, grills, picnic tables, an established scenic overlook and a visitor center, along with environmental and tourism-based statistics.

One of the “top priorities of the plan” is to increase the size of Elk Knob State Park by 1.5 times its current size of 4,303 acres, in cooperation with nearby landowners, “for the purpose of trail connectivity and resource conservation.” The existing park includes a patchwork of acreage around Elk Knob, Snake Mountain and another mountain, The Peak.

According to the master plan, 94 percent of current park lands will be preserved, including a number of existing meadows, and the remaining 6 percent, which consists of lands that have been previously disturbed and have a lower conservation value, will be used for park amenities.

Planned amenities include about 11 miles worth of the NPST, along with five new trailheads that offer access to the trail. At least one mile of the trail is planned to be ADA-accessible.

A campground near The Peak is set to provide group camping activities, including both primitive and RV camping, and two pavilions are planned to be constructed, “one of which is proposed to be enclosable for year-round use.”

Noted in the master plan are “proposed backcountry opportunities,” which would include shelters and primitive campsites, but the number and locations of these amenities are yet to be determined.

Additionally, a visitors center “with a warming foyer and a community room” is proposed to be built at the entrance to the park, just off of Meat Camp Road, where an amphitheater, vault toilet and maintenance garage already exist. Farther south on Meat Camp Road, a new day use area is planned, with a picnic area, pavilion and trailhead.

A pavilion and stage are planned to be amenities added to the area surrounding the visitor center, which will be between Beech Tree Trail and the planned NPST.

The Elk Knob Master Plan states that “the Nature Conservancy and the Blue Ridge Conservancy have both been critical partners in helping to acquire lands for Elk Knob State Park. Conservation organizations continue to actively partner in conserving land for and around the park.”

It also includes that park officials are considering several additional camping options, including cabins and a shower house.

The total estimated cost of the Elk Knob State Park project laid out in the state’s Division of Parks and Recreation plan is nearly $27 million.

Community members who are interested in providing feedback to the Elk Knob Master Plan should email the North Carolina Division of Parks and Recreation Planning and Program Manager Dave Head with comments at dave.head@ncparks.gov.