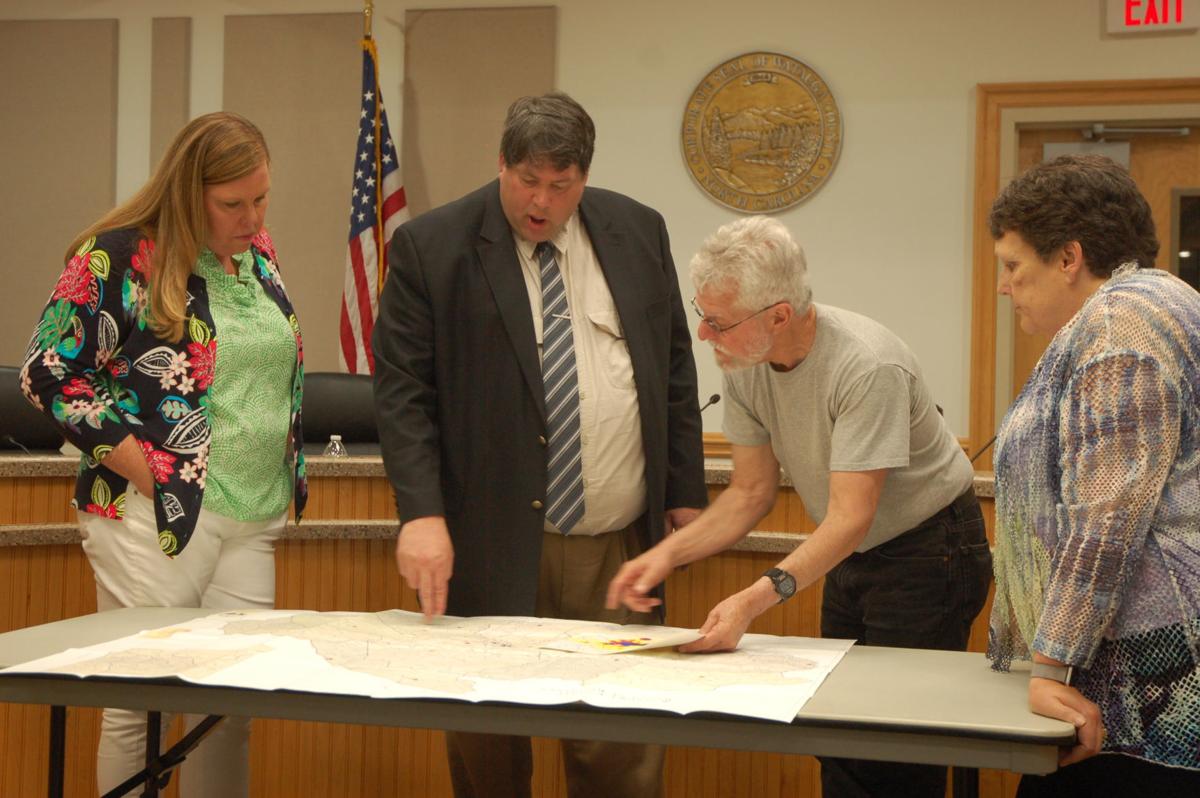 Watauga County Board of Elections members, from left to right, Nancy Owen, Eric Eller, Richard Rapfogel and Jane Ann Hodges debate over voting locations on a map of Watauga County on Wednesday, July 18. 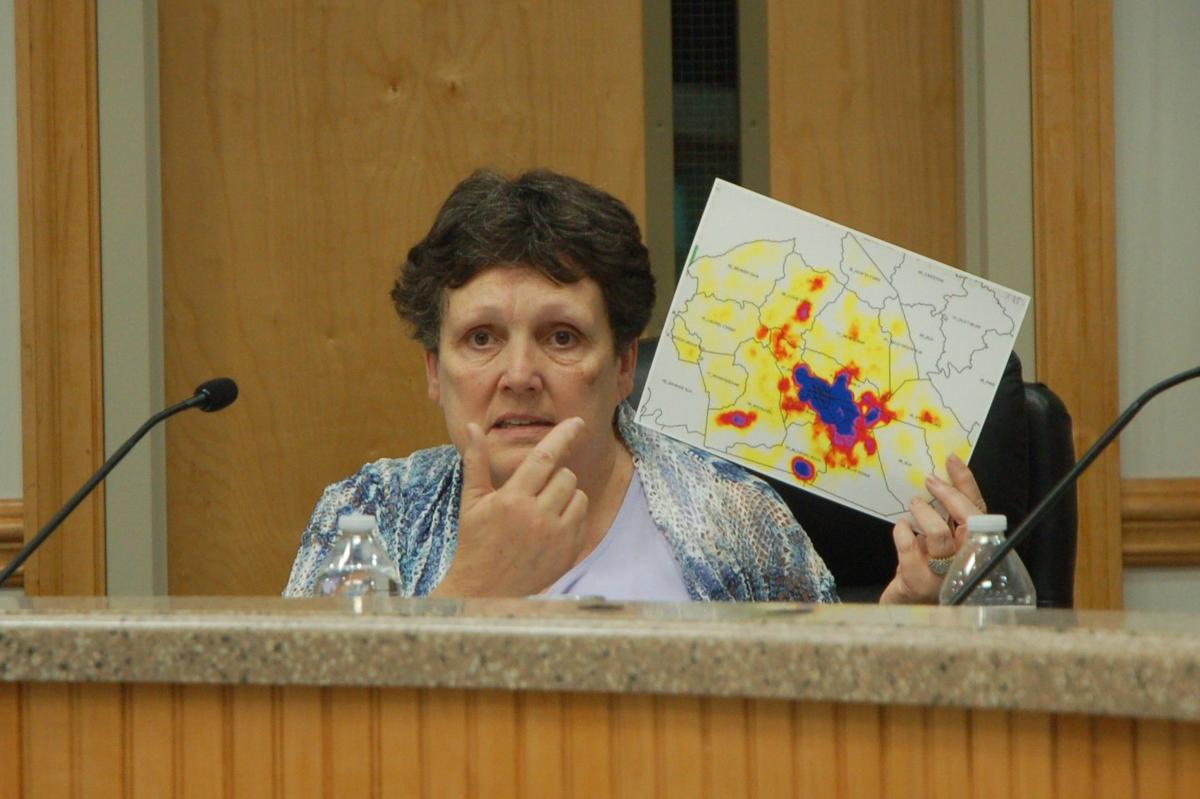 Watauga County elections board member Jane Ann Hodges shows a heat map of population density in Watauga County during a meeting on July 18, 2018. 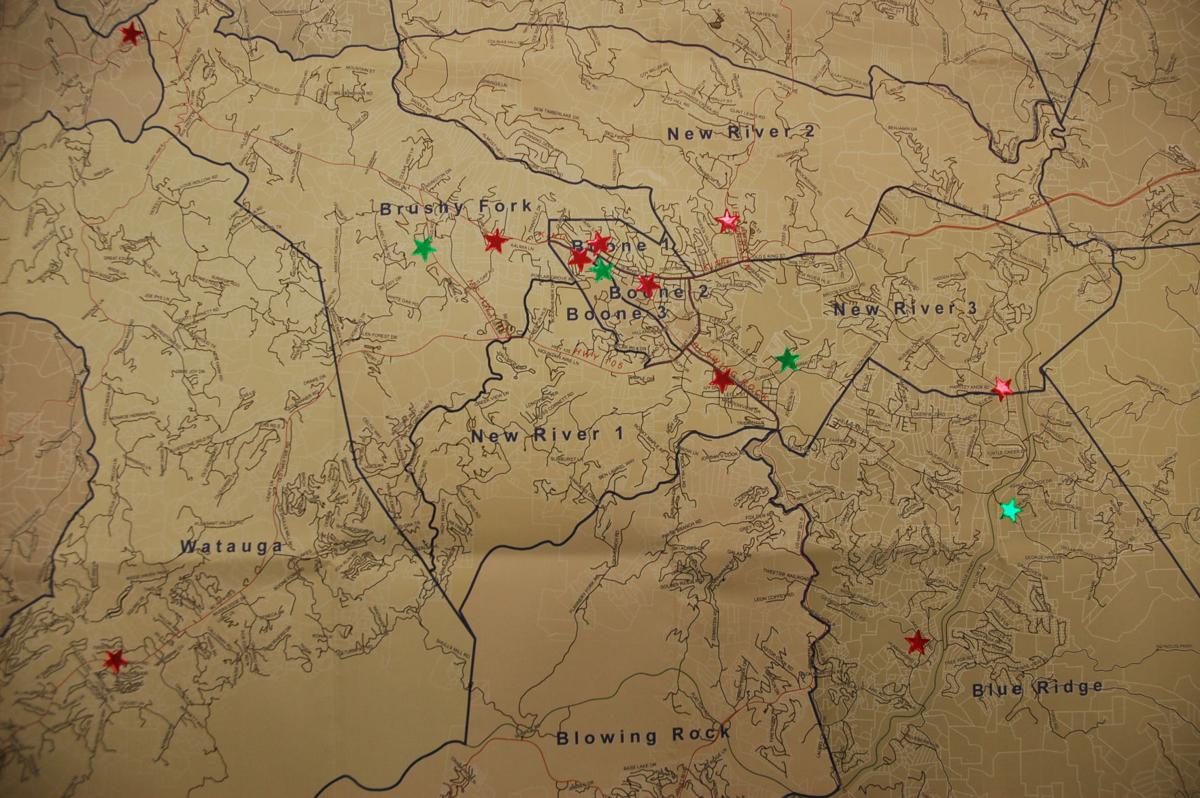 Watauga County Board of Elections members, from left to right, Nancy Owen, Eric Eller, Richard Rapfogel and Jane Ann Hodges debate over voting locations on a map of Watauga County on Wednesday, July 18.

Watauga County elections board member Jane Ann Hodges shows a heat map of population density in Watauga County during a meeting on July 18, 2018.

BOONE — An early-voting plan using six early-voting sites was unanimously approved by the Watauga County Board of Elections on Wednesday, but five precinct Election Day polling location changes were struck down 2-2 in a vote that required unanimous approval.

The early-voting plan was approved during the meeting with minimal discussion, but after the meeting, Democratic board members Jane Ann Hodges and Richard Rapfogel refused to sign off on the plan, with debate going back to the precinct polling locations that were just voted down. Watauga County Board of Elections Director Matthew Snyder asked the board members to refrain from discussing board matters outside of a public meeting.

Rapfogel said after Hodges left that he would wait until talking to Hodges before signing.

The early-voting sites approved during the meeting were the Watauga County Administration Building, the ASU Plemmons Student Union, Blowing Rock Town Hall, Deep Gap Fire Department, Meat Camp Fire Department and the Western Watauga Community Center. The sites will be open Oct. 16-19, 22-26 and Oct. 29 — Nov. 2 from 7 a.m. to 7 p.m., plus Saturday, Nov. 3 from 8 a.m. to 1 p.m.

The board thanked the Watauga County Commissioners for their support in appropriating the elections board more money in order to comply with the state law.

As explained by board member Nancy Owen, a Republican, in order to keep all six sites open concurrently as required by recent state law changes, they eliminated one site worker per site in the plan. Owen said included in the compromise with the commissioners was the option to fund more workers at a site if there were long lines observed.

Board member Eric Eller, the board’s other Republican, said that the state legislature put the county commissioners between a rock and a hard place with the new early-voting regulations, but that it gives the voters more opportunities and hours to vote.

Hodges and Rapfogel voted in favor of the changes while Owen and Eric were against the changes.

A subsequent motion by Rapfogel to change just Boone 2 from Legends to the student union was tabled until the next meeting on Thursday, Aug. 9.

Hodges spoke about the challenges of having polling locations at churches, noting that the elections board office has a handshake agreement with the churches not to campaign on their property and also mentioned possible scheduling conflicts for second primaries, which Watauga did not have in 2018. Hodges said, according to conversations with county officials, the North Carolina National Guard Armory would be turned over to the county and/or town in the next “two to three years.”

“I feel that is just a perfect site,” Hodges said of the Boone Armory.

In regards to combining Boone 2 and Boone 3 into a single location at the student union, Hodges said the turnout in Boone 3 is low and that she was “embarrassed” about having voting at Legends, saying ASU is planning to tear it down, and that she has major allergy problems going there due to past flooding issues.

“I feel in each of those, we would be increasing voting,” Hodges said of the proposed polling location changes.

Hodges said that the student union is the most handicap-accessible location in the entire county and has more than 50 parking spaces.

Eller spoke about his research on the subject, using figures from the 2010 U.S. Census to say that while Boone is the major population center, there’s more households out in the county and in general, was against moving polling locations closer to Boone at the expense of people living further out in the county, mentioning the proposed new polling locations for Brushy Fork and New River 3 in particular.

“As we move these things in, we take them away from rural areas,” Eller said. “It’s not perfect, but we’re taking an imperfect situation and making it worse.”

Rapfogel displayed a heat map of population density in Boone, using it for his argument in favor of the polling location changes and having it as close to as many people as possible.

Much of the discussion of polling place changes centered on how ASU students are counted in the U.S. Census and how many of the more than 18,000 ASU students should count.

On the combined Boone 2 and Boone 3 polling location idea, Eller said it would be one site serving the two largest precincts in terms of registered voters. Hodges said there’s a lot of “dead wood” in former students who no longer live there but are still registered in Watauga.

Eller said he has heard a lot of vehement opposition from Boone 3 voters to an ASU site.

“I was somewhat inclined to go along (with the ASU student union),” Eller said,” “I was surprised at the number of (Boone 3) callers who absolutely do not want to go to the ASU campus. It kind of surprised me.”

Eleven public speakers gave their opinions on the potential issues. Many who spoke were in favor of moving the New River 3 polling location and the ASU “mega-precinct.”

“I would like us to see New River 3 go back to the armory,” said Charlotte Mizelle. “It’s the best for disabled, elderly voters.”

Lory Whitehead said the fog at Mt. Vernon gets “as thick as pea soup” and said it’s unsafe and that people going there to vote are confused.

“The board’s job is to make voting as easy as possible,” said John Callahan, resident of New River 3. “It had to be moved (from the armory) for renovations, but it can be moved back now.”

ASU student and student government member Lee Franklin said that the west side of campus is part of the Boone 3 precinct and it would make sense for them to be able to vote at the student union.

Others wanted the precinct locations to stay the same.

“We have to think of the older citizens who might be used to going to these polling places,” Billy Norris said. “We need to think fairly of what is best for everyone.”

“I feel like the Republican-dominated polling places are taking a hit,” said Watauga County Republican Party Chairwomen Karen Lerch. “It’s going to be foggy any day. And you never know when there’s going to be a flood at the armory.”

In other meeting news, as mandated by state law, new board officers were appointed. Owen was elected chair, Hodges as vice chair and Eller as secretary. State law mandates that a Republican chair all county election boards in even-numbered years and Democrats be the chair in odd-numbered years.

An earlier version of this story misidentified the date of the next Watauga County Board of Elections story. The next meeting is Thursday, Aug. 9 at 4 p.m.