BOONE — The Watauga County Board of Commissioners presented the fiscal year 2020-21 proposed budget for a public hearing on May 19, with no changes made from the recommended budget by county staff.

The commissioners scheduled roughly 11 hours spanning May 14-15 to deliberate upon the budget, as the two-day budget work sessions typically take many hours of discussion. The commissioners finished their deliberation in approximately four and a half hours. There wasn’t much debate among the board on many of the budget items, as the budget is “mainly a continuation budget with small funding amounts allocated to critical infrastructure and services,” according to County Manager Deron Geouque’s budget summary.

The commissioners hosted the 5:30 p.m. meeting on May 19 virtually. In order to speak during the public hearing, community members were asked to call (828) 265-8000 by 5 p.m. on May 18. Comments from the public hearing were unable to be included by presstime. Check www.wataugademocrat.com for updates.

The proposed budget doesn’t include the third year and last phase of the county’s commitment to the Appalachian Regional Library to increase staff salaries as discussed during the commissioners’ budget retreat in February. The county has increased the library’s allotment by $47,600 for the past two years, and the 2020-21 increase would have been $699,960. The library allocation will remain at $652,360, which Geouque said is “flat” and is the same amount the library received in the current fiscal year. 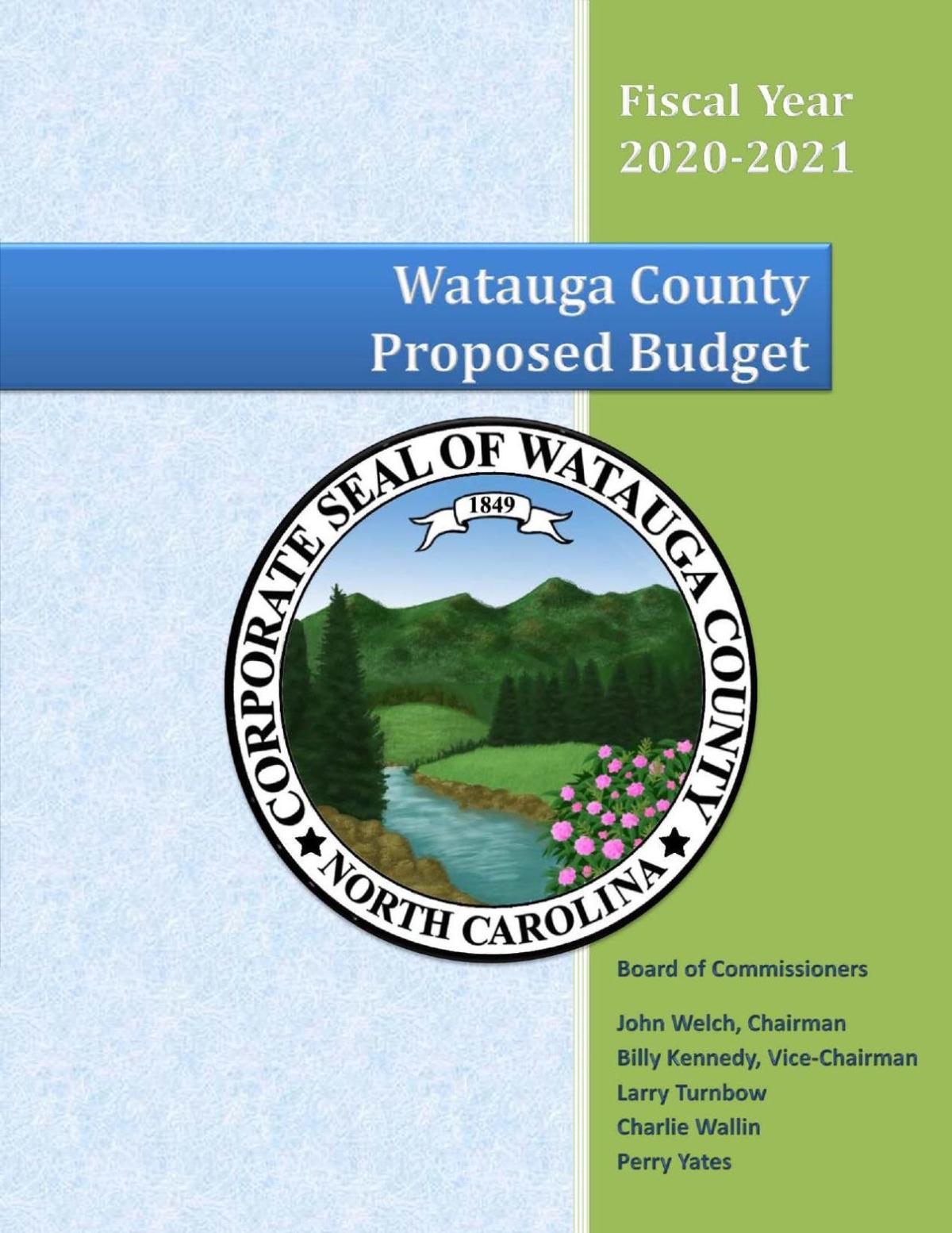 The proposed budget does include the third year of its recovery plan for AppHealthCare, in which the agency is allocated $66,209 more than the $746,920 the agency received in the current fiscal year, for a total of $813,129.

The agency serves Watauga, Ashe and Alleghany counties, and Geouque said it was rumored that Alleghany was in talks of decreasing its funding to the agency. However, Geouque said the last he heard, Alleghany officials were potentially going to increase funding for AppHealthCare, but not at the full amount originally planned for its third phase of a recovery funding plan.

During the commissioners’ May 5 meeting, Geouque mentioned that even though this would complete phase three of the county’s planned increase to AppHealthCare, that the county may likely need to continue to increase funding in the coming years. He added during the May 14 portion of the budget work session that AppHealthCare probably still needs another $1 million to $1.5 million to be sustainable. It would be key for all three counties the agency serves to examine how to provide that additional funding in the future, he said.

According to the proposed budget, $15,114,674 is planned to be allocated to Watauga County Schools — a $4.5 million drop from the $19,657,868 approved for 2019-20. Geouque said the county is keeping the school system’s current expense budget allocation the same, and is including $450,000 in funding for current capital projects for the school system along with $500,000 in capital improvement plan funding.

Superintendent Scott Elliott and members of the Watauga Board of Education joined for part of the May 14 budget discussion, and said the school system understands the difficult decisions the county and school board must make at this time.

Elliott recognized that the approximate $4 million reduction comes largely from the allotment for WCS’s long-term capital fund, and that some capital projects may need to be put on hold as a result. He also mentioned that some current expense items are out of the school system’s control — such as money for employee benefits or retirement.

“Even if our local current expense budget is held to the same, there will be something we’ll need to cut in order to make up for those increases in health care and retirement,” Elliott said.

Often during budget discussions, commissioners will mull over how much in special appropriations funding to give to area nonprofits. Hardly any objections were made to the recommendations for fiscal year 2020-21. The proposed budget is recommending to keep the allotments “flat” — meaning the same — to 19 of the 21 budget items in special appropriations, according to Finance Director Misty Watson.

Geouque said the town had not indicated to him whether they were going to maintain that SRO position or not. If the town chose not to, he said Blowing Rock School would be placed on a rotation among the other remaining SRO positions.

Watson said the county will take a “huge hit” to its sales tax revenues. County staff reviewed sales tax collection rates during the recession, and found there was almost a 24 percent reduction during that time.

Geouque added that staff have been on conference calls with other counties, and other officials have estimated anywhere from a 2 percent to 30 percent reduction in their sales tax revenue. Sales tax distribution to counties from the state has about a two to three month lag currently, so the county could experience a delay in receiving that money, he said.

Watson said the county was also planning to receive an increase in recreation revenues, largely due to the $420,000 it has budgeted from memberships to the Watauga County Community Recreation Center. She said the budget was set for a full year of operations at the center.

Geouque said the county will want to monitor how other larger recreational facilities will be operating and how others may implement social distancing measures. Commissioner Billy Kennedy questioned how the budget would reflect numbers if the center can’t open until mid-summer.

“If we end up opening at a later point in the year, the expenses would also not be as expected so those would be reduced so they should correspond with each other,” Watson said.

Comments on the public hearing may also be submitted, through Wednesday, May 20, by emailing public.comments@watgov.org or by mail to Clerk to the Board of Commissioners, 814 West King Street, Suite 205, Boone, NC 28607. The budget is planned to be adopted by the board at the June 2 meeting, according to previous information from the county.