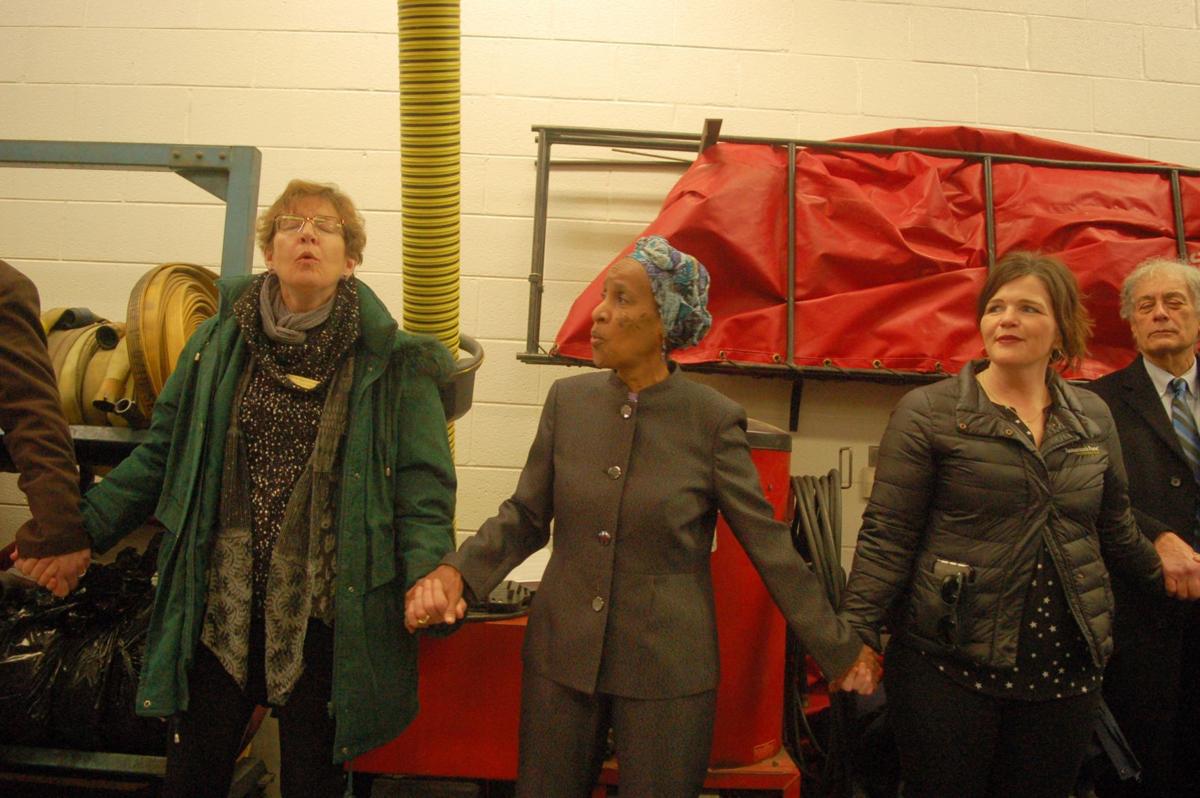 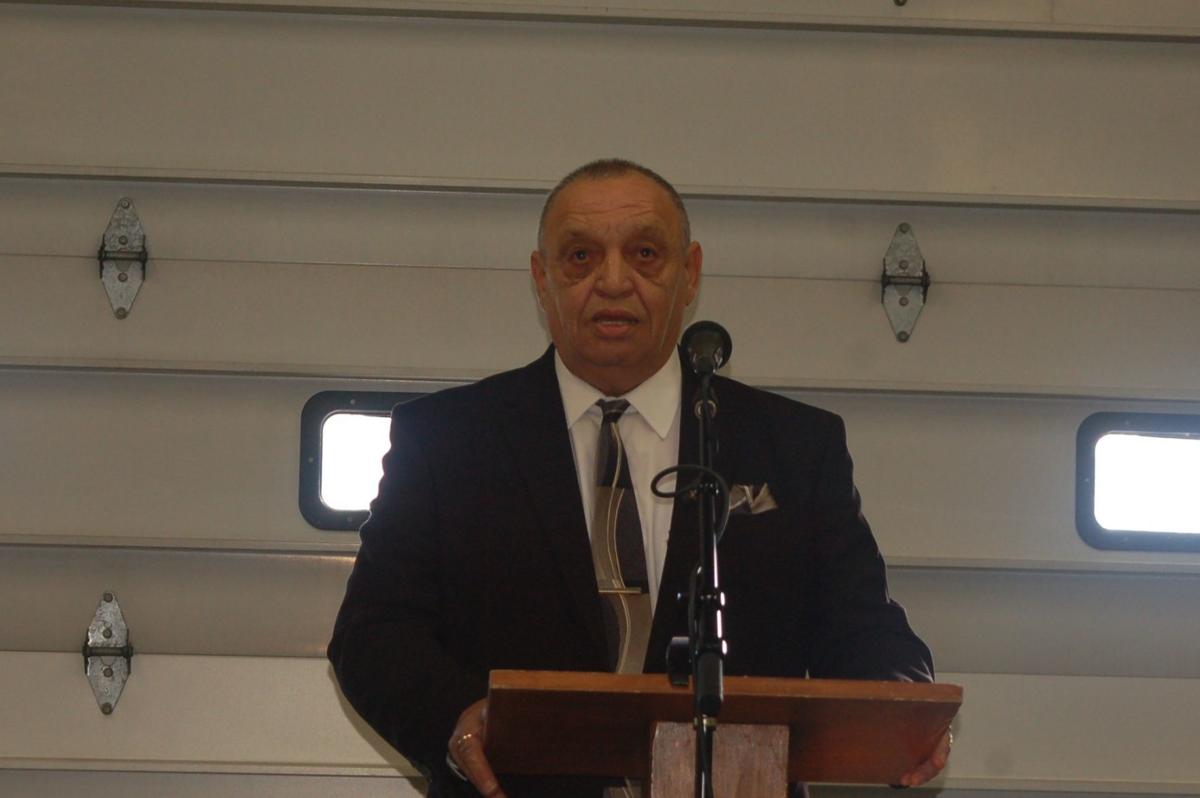 Boone Mennonite Bretheren Church Pastor Mike Mathes speaks to a crowd gathered at Boone Fire Station No. 2 at the dedication of Martin Luther King Jr. Street in Boone on Jan. 20. 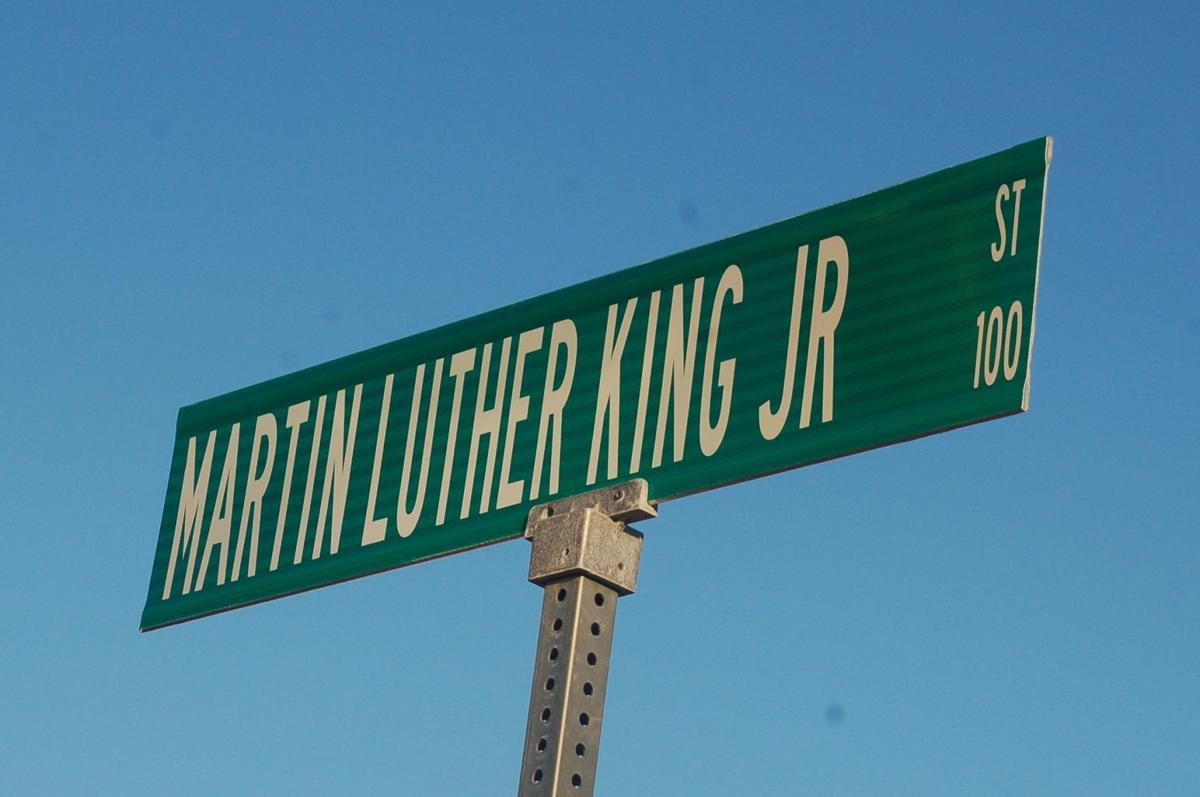 The newly erected Martin Luther King Jr. Street sign in Boone is visible at the intersection with State Farm Road. 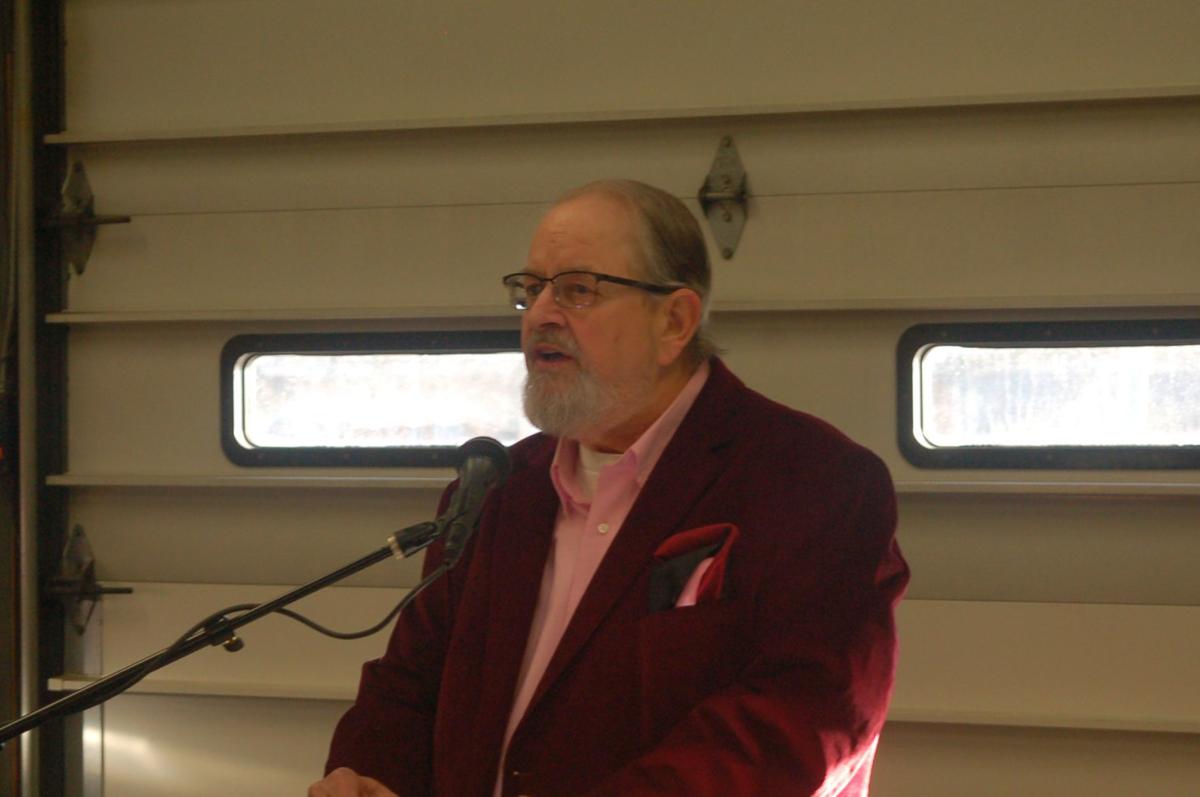 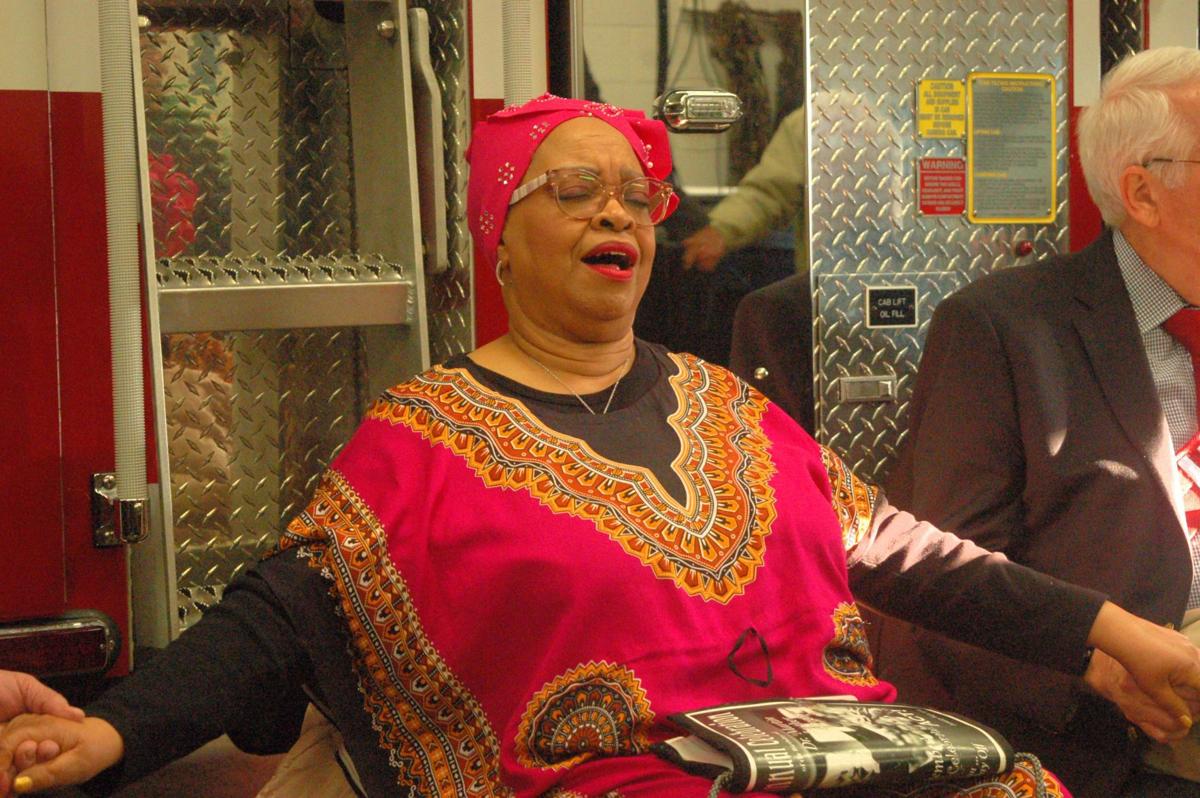 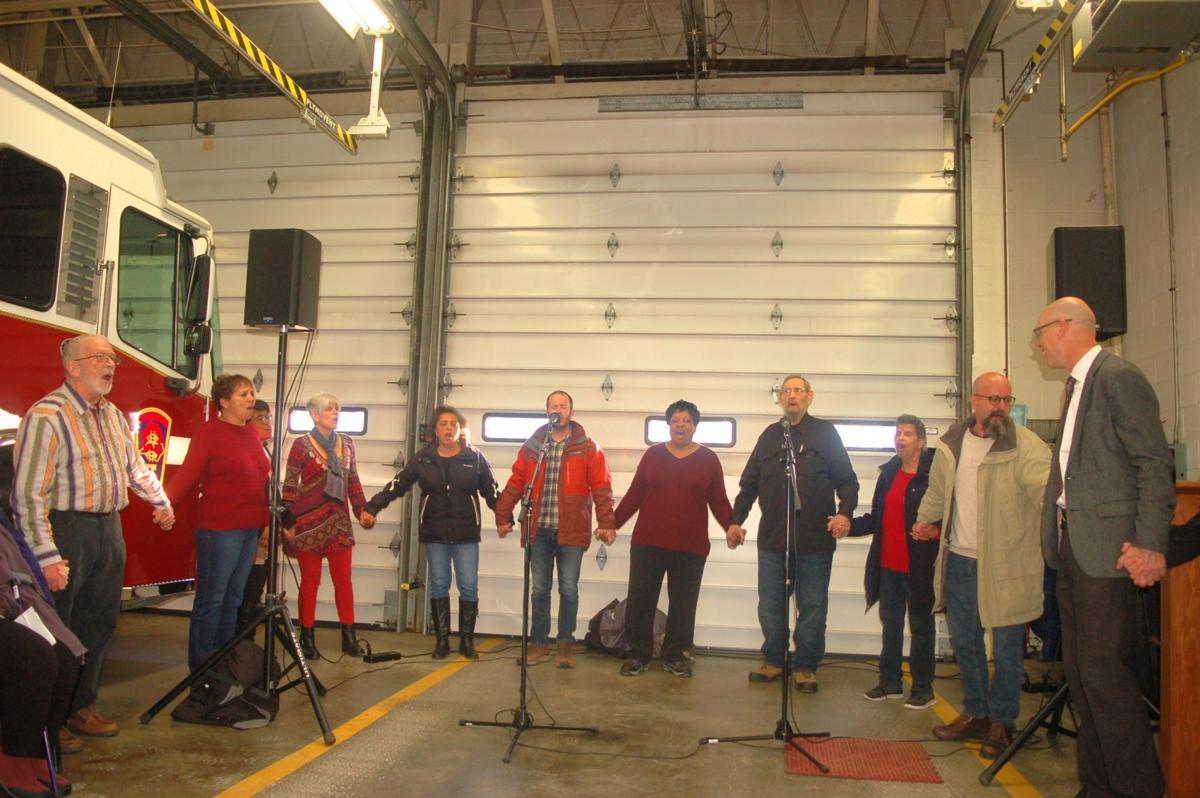 Members of the Boone Mennonite Brethren Church choir holds hands with community members as they sing ‘We Shall Overcome’ at the Martin Luther King Jr. Street dedication on Jan. 20.

Boone Mennonite Bretheren Church Pastor Mike Mathes speaks to a crowd gathered at Boone Fire Station No. 2 at the dedication of Martin Luther King Jr. Street in Boone on Jan. 20.

The newly erected Martin Luther King Jr. Street sign in Boone is visible at the intersection with State Farm Road.

Members of the Boone Mennonite Brethren Church choir holds hands with community members as they sing ‘We Shall Overcome’ at the Martin Luther King Jr. Street dedication on Jan. 20.

On the day named after civil rights leader Martin Luther King Jr., the town of Boone on Jan. 20 honored his life and work by dedicating a section of Hunting Hills Lane to him in a ceremony at Boone Fire Station No. 2.

“We are proud and we are honored, we are humbled that a man of color would be bestowed such a high honor here in the High Country of Western North Carolina,” Mathes said. “On behalf of the proud and unbeaten Junaluska community, we just say ‘thank you’ to all those that have had a part.”

The speakers described what the newly named Martin Luther King Jr. Street in Boone can do for all people in the High Country and those who visit.

“I think that this street can serve as a beacon of light, a bridge over troubled waters, showing the relevance of historic black contributions and that we can come together in love, peace and harmony for every creed, every race, every religion, everybody,” Juanita Hay said.

“It brings me great joy, as a black man, that the town has chosen to dedicate this space for Martin Luther King Jr., one of our nation’s great leaders,” Milbourne said.

Boone Town Manager John Ward noted that the stretch of street renamed after King includes Clawson-Burnley Park, the Boone Greenway Trail and the Watauga County Recreation Center, so many families and kids will be able to see King’s name.

The event featured the Appalachian State ROTC color guard presenting the American and North Carolina flags, as well as a number of songs by the Boone Mennonite Brethren Church choir.

Juanita Hay said that this idea first was first discussed five years ago and was unsuccessfully proposed at least twice to the Boone Town Council prior to 2019. The effort was renewed by Boone Town Council Member Sam Furgiuele, who proposed the idea at a June 2019 town council meeting.

The idea proposed originally by Furgiuele was to rename New Market Boulevard after King, due to its proximity to Hardin Park School. However, several business owners on the street opposed it, saying it would cost them thousands of dollars to change their addresses. Some said that renaming New Market Boulevard wouldn’t properly honor King’s legacy, with business owners saying the road was more of a cut-through and not a main thoroughfare.

Other suggested streets in July 2019 included Howard Street, Old East King Street, State Farm Road and Meadowview Drive. On Aug. 15, the council unanimously approved naming the stretch of Hunting Hills Lane from the intersection of State Farm Road to the bridge that separates the recreation fields and the Boone Greenway Trail from the nearby residential neighborhood. The residential section of Hunting Hills Lane will retain that name after residents spoke against the proposal and presented a petition.

Mathes made note of the contention over naming a street in Boone after King, telling the crowd that young adult members of his church found some of the comments in the debate to be hurtful. But with the matter decided, Mathes expressed gratitude for those who pushed the renaming through.

“We are proud to see that hate has no place in Boone, North Carolina,” Mathes said.

Juanita Hay also noted some of the negative comments made about the proposal, but quoted King in that love and not hate can drive out hate.

Milbourne said that coming up to Boone and ASU from Fayetteville in 2016, he was scared of what to expect as a black man. As a graduating senior four years later, Milbourne complimented the community and said he looks forward to returning to Boone.

“I hope and know that this action by the town is the start of a movement where the town will show an even greater appreciation and respect for African-American history not only in our nation, but in the town of Boone,” Milbourne said.

Mathes quoted MLK in asking those in attendance not to turn a blind eye to what was happening in America.

“Are we gonna stand still and take steps back to the days of segregation and hate? We pray not,” Mathes said. “Our work is not done.”

Fred Hay talked about the abuse King suffered from those in power while protesting.